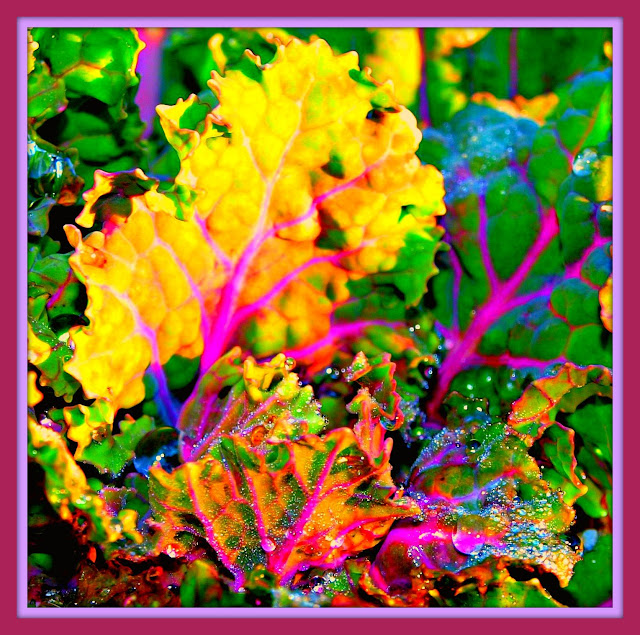 Those of you who have been following my blog for a fair while will know that I publish a lot of photos. In order to get these photos to look the way I want them I edit them using a piece of software offered (for free) by Google. It's called Picnik. It's closely linked to the Picasa Web Albums suite. Anyone who uses Blogger (and presumably any other Google service, such as Google Reader) can use this software - in fact they would be foolish not to! You may not know this, but when you publish a photo in a Blogger post, it stores a copy of the photo in a web album that has the same name as your blog. The maximum size of such an album is currently 1000 photos (which in my case is not a lot!), but you can make additional albums for yourself whenever you feel like it. I now have 12 of them. Your initial ration of free storage space is 20Gb, but you can quickly, easily and very cheaply buy more storage space whenever you need to.

First steps: take your photo, and upload it to a Picasa Web Album. It may not be particularly good at this stage, but just a few minutes' work can make it an awful lot better. For example:-

Here's one of my favourite photo genres - water droplets on a leaf. The initial photo is not brilliant - taken in difficult light conditions, and the water droplets themselves are not in focus, but I noticed a nice light pattern on the leaf at the right, so I decided to use Picnik to help me rescue this photo. 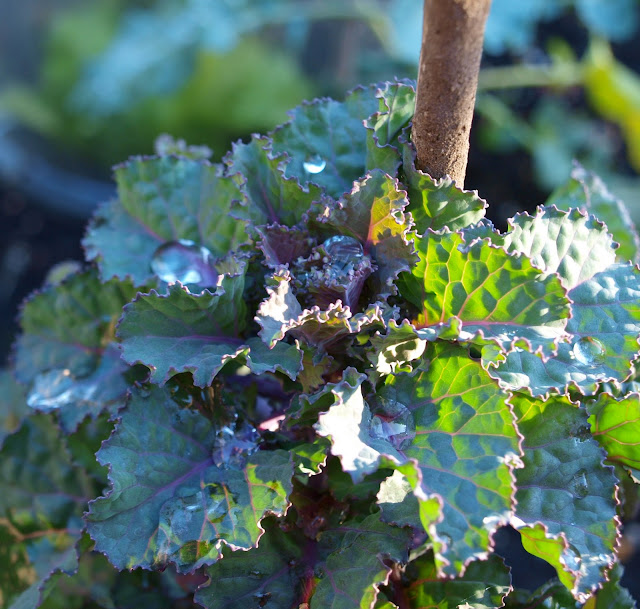 Using Picnik, I cropped the photo, leaving just the bit I wanted, (which has the effect of zooming-in) adjusted the exposure, added "Clarity" and this is what I got. It's not as crisp as I would like, but that's what happens when you zoom. When my new Macro lens arrives, I hope to do better! 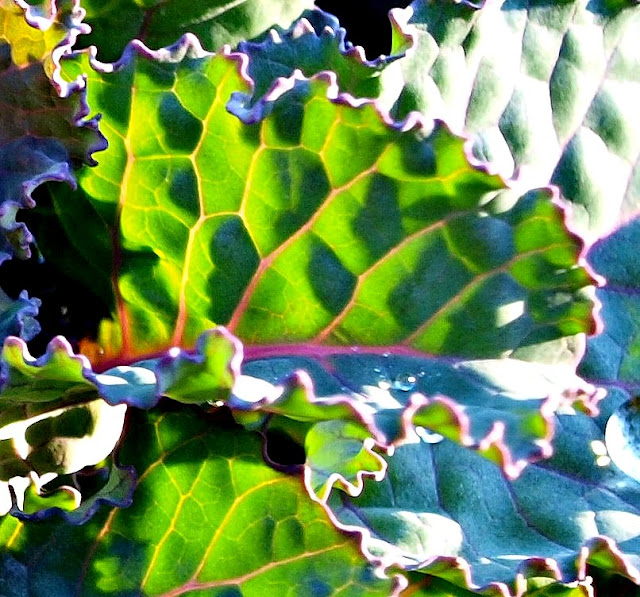 Picnik also allows you to add literally hundreds of different features and effects. For instance, changing the temperature settings can get you something like this: 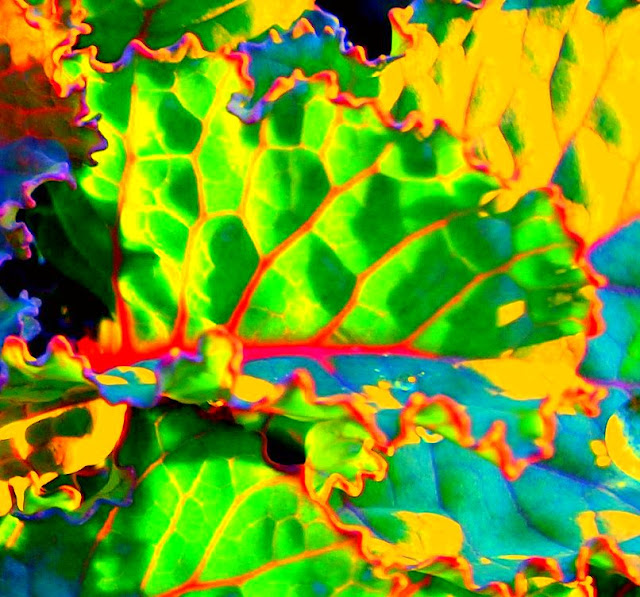 Now don't you wish you could grow brassicas as colourful as that, eh??

But as I said, I was in pursuit of water-droplet photos, so the above - although interesting -  was not what I was after. This next photo has potential. Although it is too dark, at least the water droplets are nicely in focus. 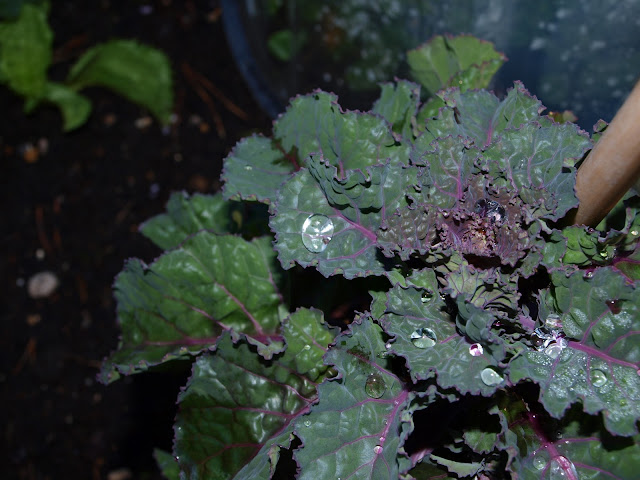 Here it is, cropped, and with the exposure adjusted: 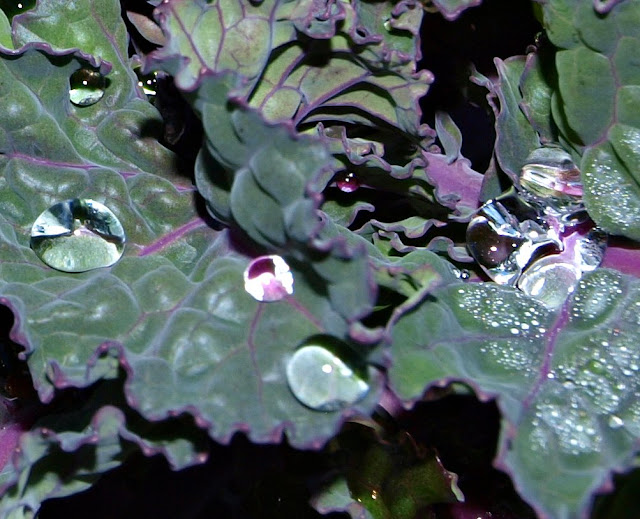 Later on, using a bit of creativity, I made it look like this: 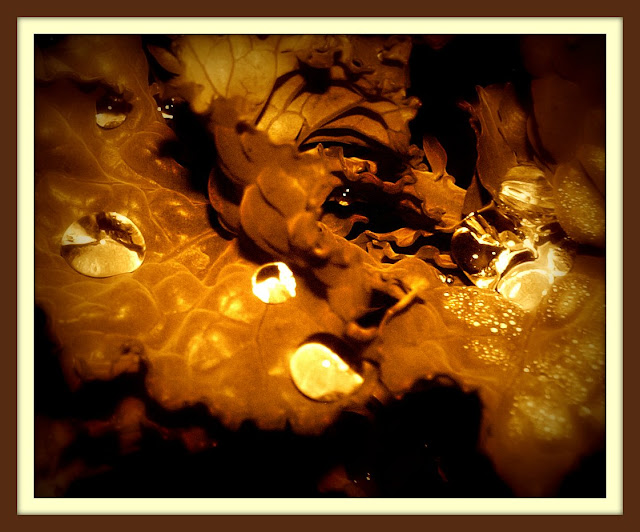 ﻿I think this has a sort of Science Fiction look to it now, don't you? Adding a frame is easy too: there are dozens of different styles to choose from, and you can adjust the colour and thickness of both inner and outer bands. I think the frame formalises the photo somewhat and helps with the transformation to a work of art.
Today I have published my re-vamped PHOTOS page, so perhaps you would like to visit it and see some more of my work?
Go on then, I urge you to have a play with Picnik and see what you can do!
P.S. Google did not sponsor me to write this (more's the pity...). I genuinely think their product is great - and easy to use.
Posted by Mark Willis at 17:30