One Good and one Bad, but both Ugly

Following suggestions from some readers, I have been seeking out creatures to photograph with my new Macro lens. Unfortunately I have not been very successful, for a number of reasons: firstly, last weekend when I had the opportunity to take photos the weather was very cold and not conducive to grubbing about looking for small insects; secondly I have been suffering from a severe bout of Fibromyalgia which has meant that I not been physically able to get down on my hands and knees for those sought-after close-up shots. However, I did manage to get a few shots of one garden ally - the compost worm - and one enemy - the aphid.

The worms do a great job for me. I'm pretty lazy when it comes to making compost. I bung all the material into a plastic compost bin and let the worms get on with it. I do occasionally aerate the mixture by poking some holes in it with a long wooden pole, but mostly I leave it to the worms to chew on. Their digestive processes convert the vegetable matter into perfectly acceptable compost in a susprisingly short space of time. I keep adding new material to the compost bins, but they seldom overflow. This is because I have hundreds (possibly thousands) of worms in each bin, and they all seem to have voracious appetites. Here's one trying to swallow a half of a lemon: 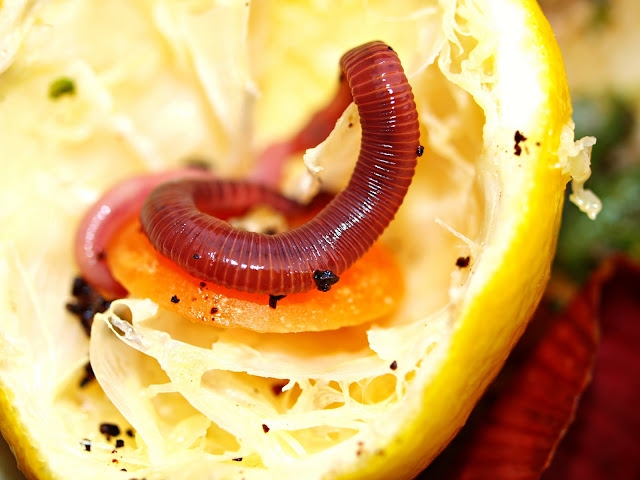 Actually I think it is probably more interested in the piece of carrot. 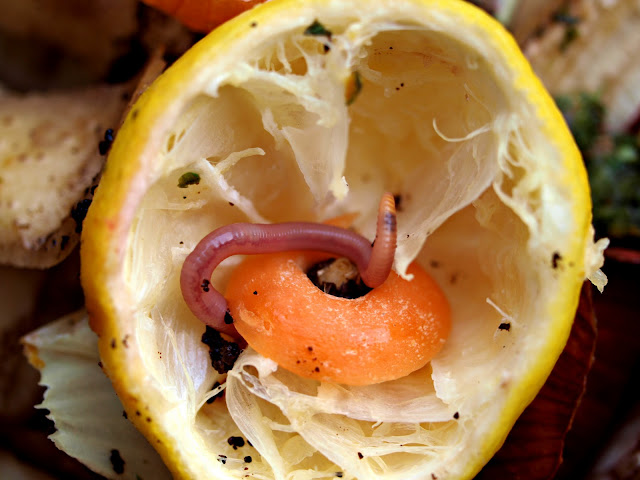 Here is a whole bunch of worms, probably asking each other "What's for dinner tonight?" 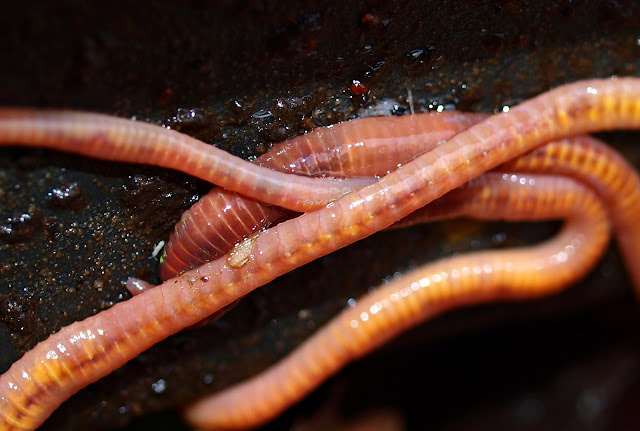 This one is evidently puzzled. Worms don't talk, so maybe they communicate in sign language...? 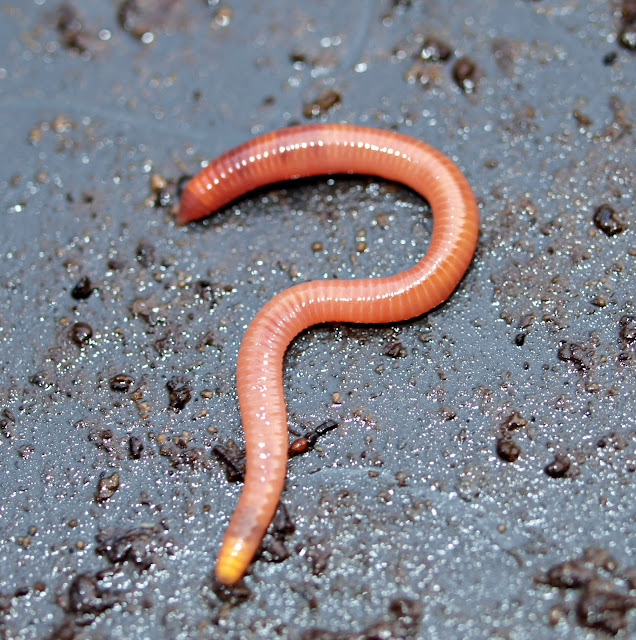 So that was the garden Allies, now some shots of the Enemies. These nasty little things are aphids, clustering round the delicate little leaves at the growing points of my Flower Sprouts, and sucking the sap out of them. 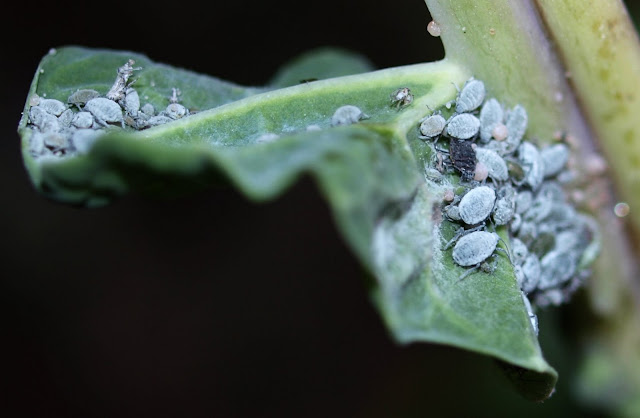 I found it very hard to get a good photo of these aphids. I never managed to get anything I was really happy with. There always seemed to be too much shadow or too much reflection. 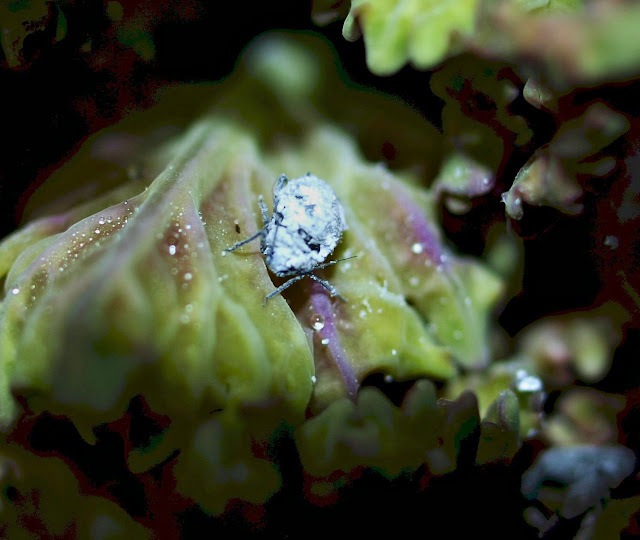 I soon lost patience and energy, and got cold, so I picked a leaf with some aphids on it and brought it indoors for another try. It was a very small leaf, so I put some grains of dry rice next to it to give an idea of the scale. 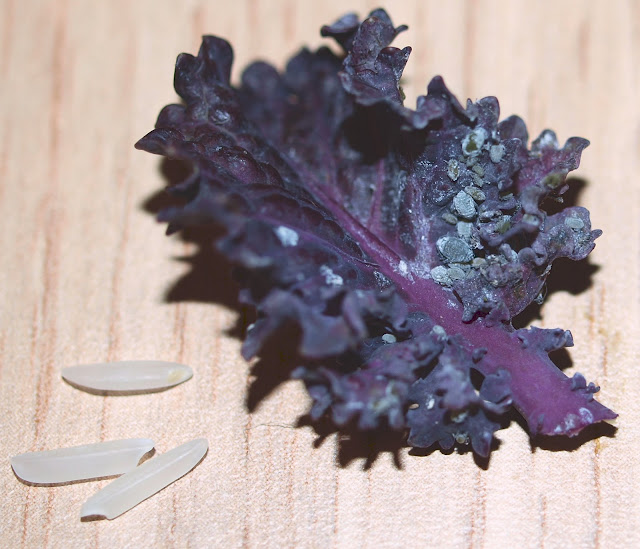 The aphids are very tiny and very dull-coloured, so not an easy subject to photograph. This is about the best that I managed to produce. I will do better eventually! 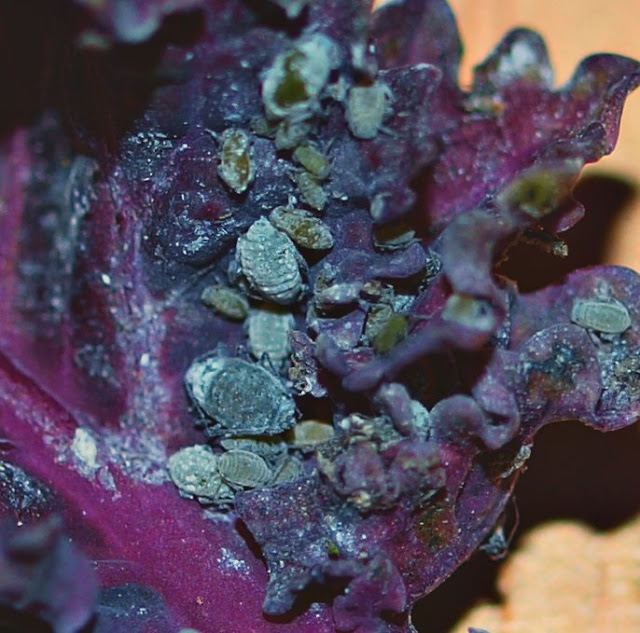 When I was clearing up I noticed some little black specks on the table where the leaf had been. Closer inspection revealed some VERY tiny aphids that had dropped off the leaf. Look at them next to the grains of rice: 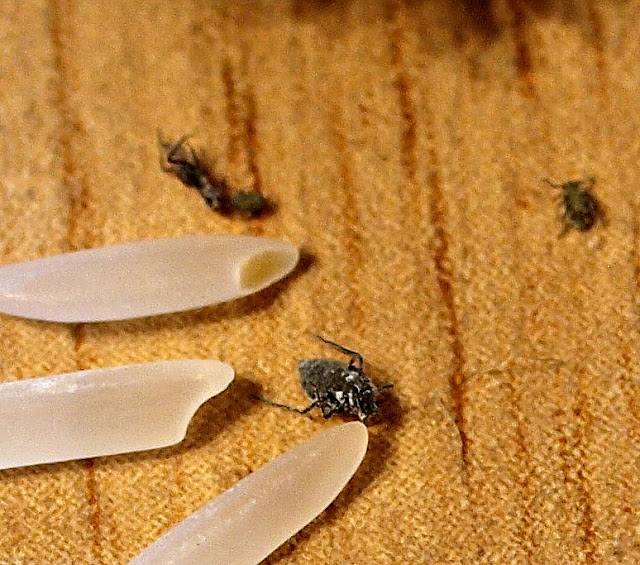 They look pretty dead too, don't they? Probably died of boredom whilst I was striving to get a good photo!

Most of these shots demonstrate the main problem with Macro photography; if you get one part of your subject in focus other parts of it probably won't be. The depth of field is very shallow. I'll be the first to admit that I am still far from expert in the use of the Macro lens, but practice makes perfect and I hope to be able to deliver some better results in due course...
Posted by Mark Willis at 17:30