A few days ago Jane made this spectacular Ham Hock Terrine: 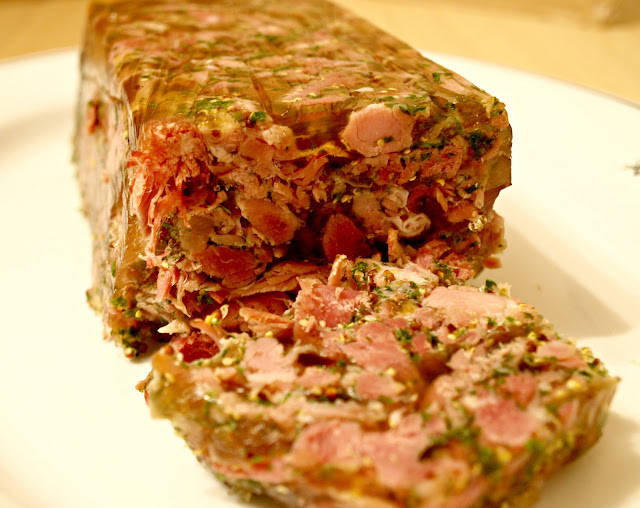 It was made to a recipe which appeared in the December issue of the BBC Good Food Magazine.

For those of you who don't already know this, a terrine is a bit like a paté, but coarser and firmer. You can't usually spread it like you can with most patés; you have to eat it with a knife and fork. And the Ham Hock is a cured version of the Pork Knuckle, which is the piggy equivalent of the Lamb Shank. It comes from the animal's ankle. The meat is full of flavour but needs long slow cooking to make it tender. Ham Hock is not something you could reliably expect to buy in a supermarket because it is relatively uncommon. It's best to do what we did - order it in advance from your local butcher.

Jane made the dish in accordance with the recipe, with one minor variation. Having been advised to do so by the butcher, she blanched the Ham Hocks (she used two) before cooking them. This involves putting the hocks into a large pan of water, bringing it to the boil and then discarding the water. This will remove some of the salt used in curing the meat. The butcher's advice was good, because even with this blanching, we found the finished terrine too salty for our liking. Jane says that next time she does this dish she will also soak the hocks overnight.

Anyway, the gist of the recipe is that you cook the ham long and slow until the meat falls off the bones, and then flake it, removing as much as posible of the fat and gristle. You keep the cooking liquor for making the jelly which binds the whole thing together. Because you need the finished item to be quite firm the jelly is enhanced with leaf gelatine. The meat is packed tightly into a Terrine or a loaf tin; the jelly is poured over the top to cover it; and then you chill the thing for several hours until it has set. Then you can turn it out onto a plate, like this: 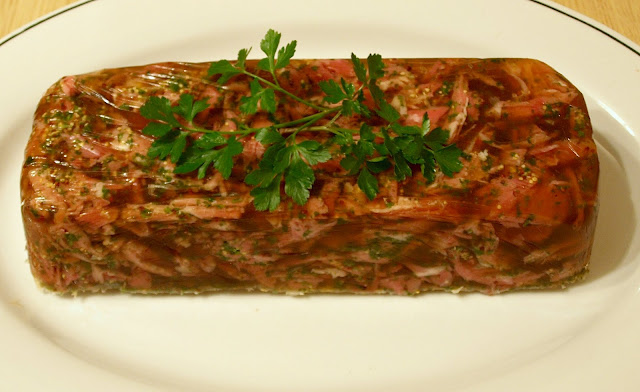 Well, yes it does look a bit like a housebrick!

This is pretty substantial fare (the recipe says "Serves eight as a starter"), so you don't need a huge amount: 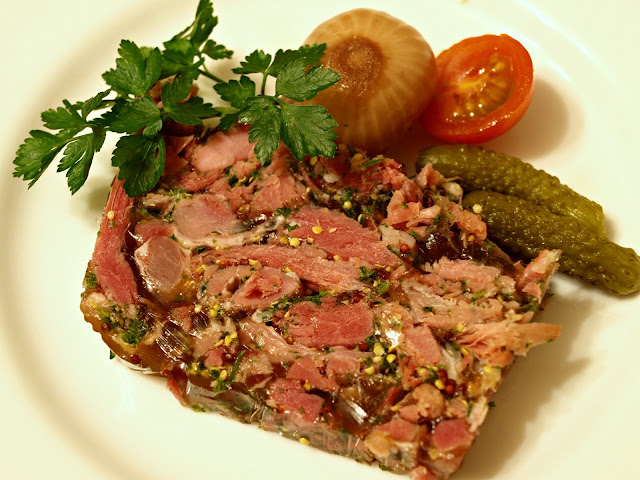 ﻿How you serve it is entirely up to you, but we had ours with a variety of additional bits and pieces: bread and butter, cheese, pickled onions, cherry tomatoes, lettuce - and in Jane's case only - pickled gherkins (I don't like them). I think the Balsamic Onions that Green Dragonette wrote about a few days ago would be a perfect accompaniment to this terrine. 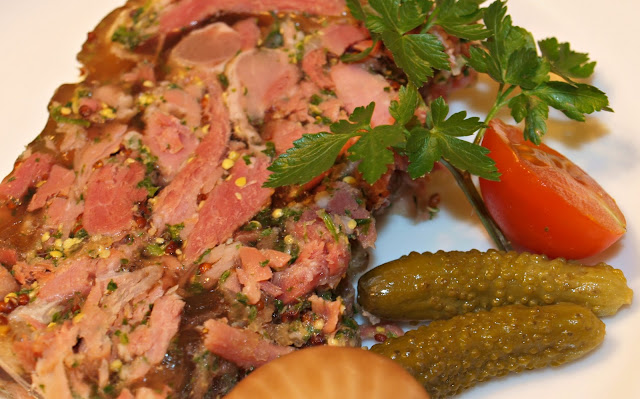 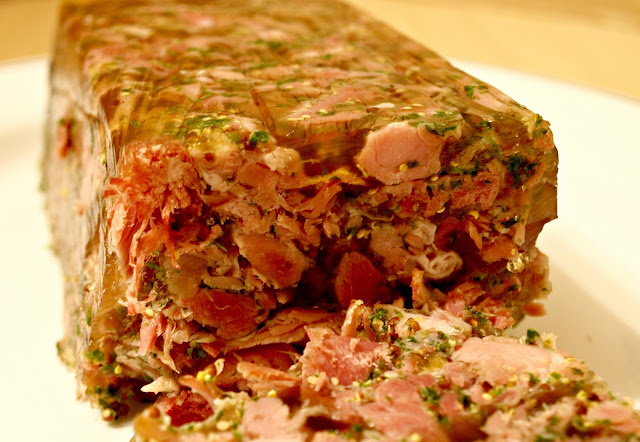 Our verdict: Visually very impressive. Perfect for a posh Dinner Party (especially as you could make it a couple of days in advance if necessary). The meat was lovely and succulent, but we felt that it was still too salty. And the spicing was too strong for us. The recipe uses 3 whole Star Anise, but this flavour dominated the whole thing and meant that we couldn't taste the mustard. I'm pretty sure Jane will make this dish again, and when she does I'm convinved it will be even better!