Along one side of my garden I have a line of Raspberry canes next to the fence. They are of the variety "Autumn Bliss".


This is a primocane variety - in other words it fruits on the current year's canes, not on the previous year's like most other varieties. I usually cut down the old canes in late Winter. This year the job needed doing a bit earlier than usual because the mild weather has prompted the plants to start growing again. Little green buds were breaking out all over. 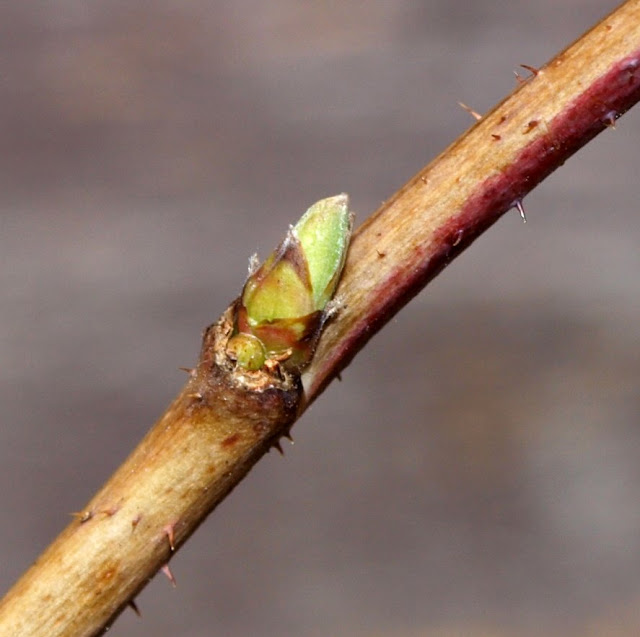 So I decided that prompt action was required. They had to be cut down without further delay. This is the scene yesterday before starting the job. 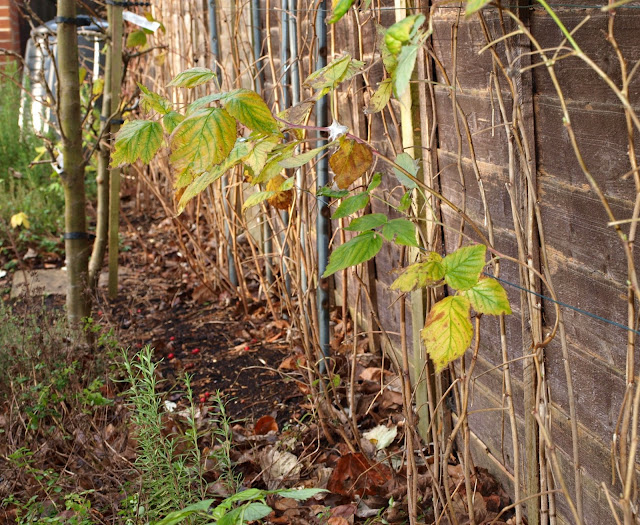 I think there are approximately 24 plants there, each one with about 3 or 4 canes, like this: 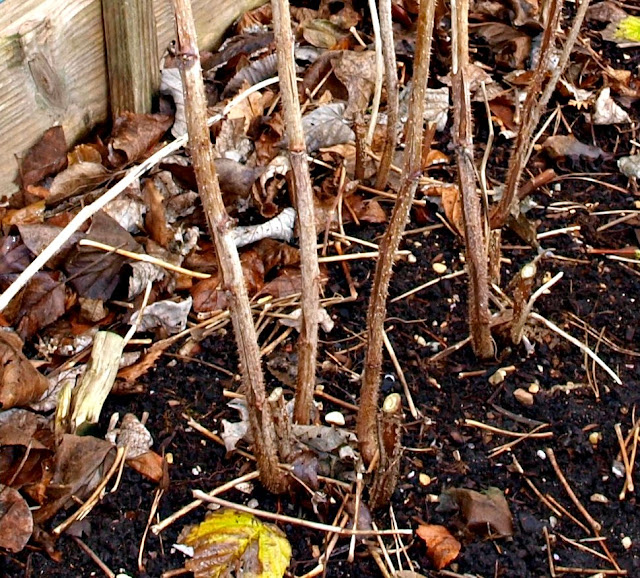 The canes are quite tough, so I used a set of long-handled loppers to cut them. They are quite hard to cut with secateurs. Another tip: wear gloves when working with Raspberries, because the canes are covered in tiny spikes.

The base of the stems was covered in a thick layer of fallen leaves. There is a Raspberry plant in this next photo. You just have to know where to look! 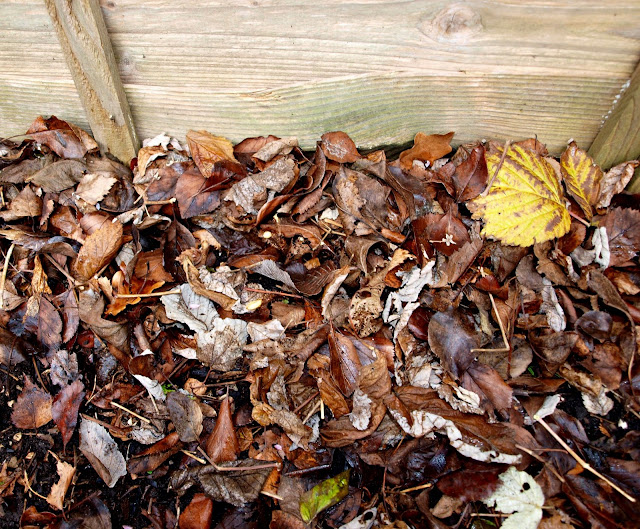 I know that this could provide a haven for any number of unwelcome little beasties, so I removed the leaves to expose the soil around the plants. The little birds will have fun over the next day or two, picking up the bugs from this area.

This is a picture of the same spot as the one in the photo above. Now you can actually SEE the Raspberry plant. 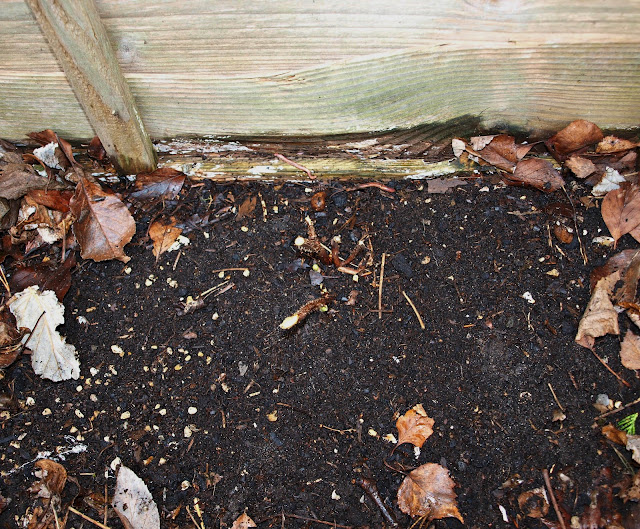 Having completed this bit of the task I also checked that the retaining wires were in good shape. In order to restrain the vigorous canes produced by these plants and keep them roughly upright, I have put in four lines of garden wire at various heights, secured to large eyelets screwed into the wooden fence-posts: 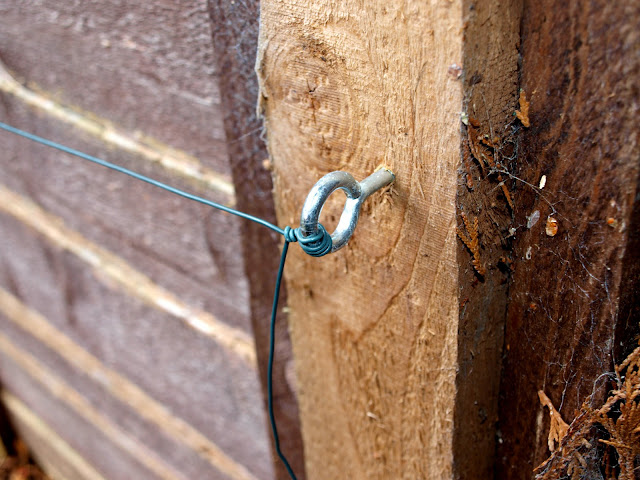 The final part of the task was to remove any "suckers" that had popped up any significant distance away from the fence. The Raspberry plant has very shallow roots, but they can travel a long distance, and every so often they throw up a new shoot - like for instance this one in one of the raised beds: 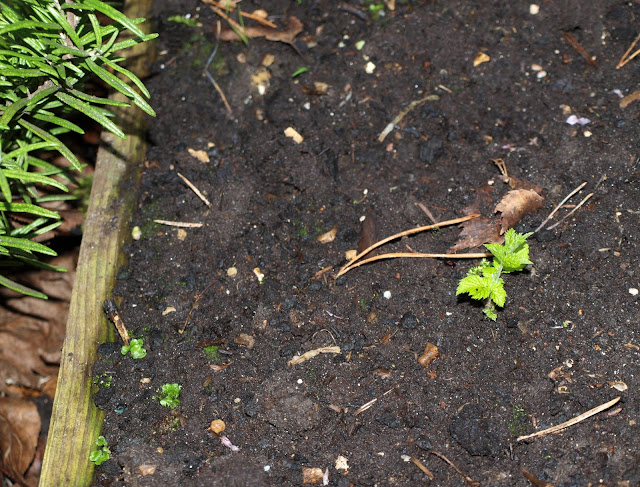 I sometimes dig up these suckers and replant them over by the fence (which is why I'm no longer able to say how many plants I have).

In a few days time I will give the plants a feed of slow-release fertiliser (I use Vitax Q4), and when I get round to emptying the compost bins I will give them a mulch of home-made compost. That will complete this year's maintenance regime, and it will be just a matter of keeping the canes tucked behind those restraining wires as they grow, and watering them from time to time if we get a dry spell. The harvesting season for "Autumn Bliss" is a long one. The first berries usually ripen in late July, and the last ones in about October. 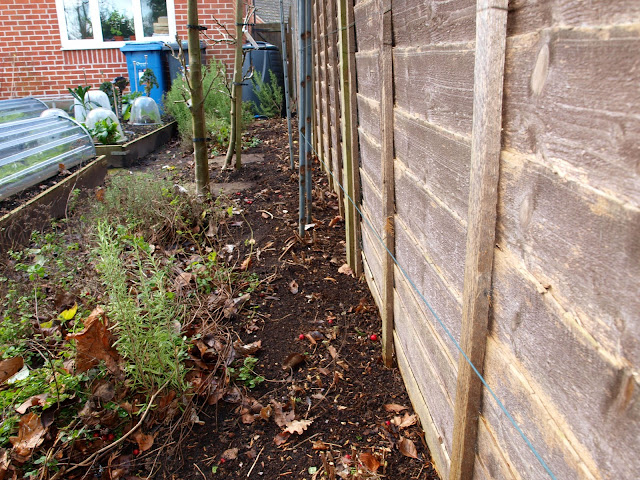 P.S. If you are wondering what those upright metal poles are, they are the arms of two old rotary clothes-lines used as stakes. I put them in some years ago to support the first Raspberry canes I had, tying the canes to them individually. Now that I have the horozontal wires they have become largely superfluous. I suppose I really should take them out...
Posted by Mark Willis at 17:30