The end of the Asparagus season

Received wisdom tells us that in England you should stop harvesting Asparagus on 21st June - Midsummer's Day. You mustn't keep on cutting those lovely succulent spears - at some point you have to allow the plants to grow some fern (leaves) in order to photosynthesize solar energy to build up their strength for the next year. This year I stopped harvesting mine in the first week of June, because we had rather strange weather in the Spring, and everything came on much earlier than normal. I started harvesting early, so I felt Ishould also finish harvesting early.

Here's a photo sequence that explains a few things about growing Asparagus. First the Asparagus bed in production mode - you can see that each plant has put up several "spears" or shoots. The spears of the variety I grow (Gijnlim) are purple as they emerge from the soil, but they gradually turn green on exposure to the light. 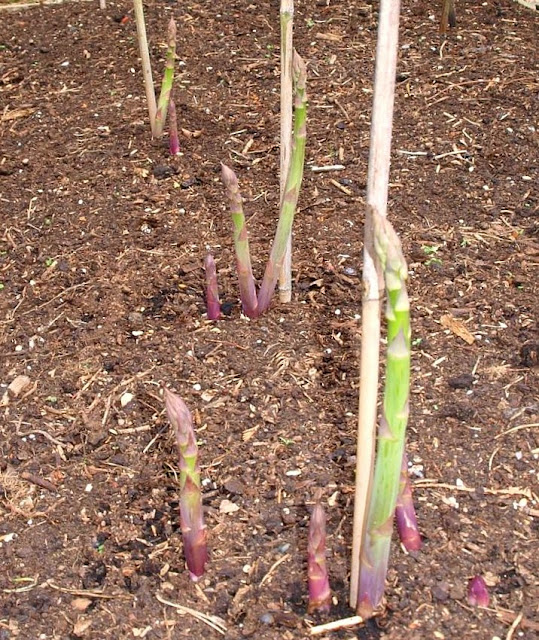 When the spears are about 12" / 30cm tall you harvest them, cutting them about an inch or so below the surface of the soil. This is what you get: 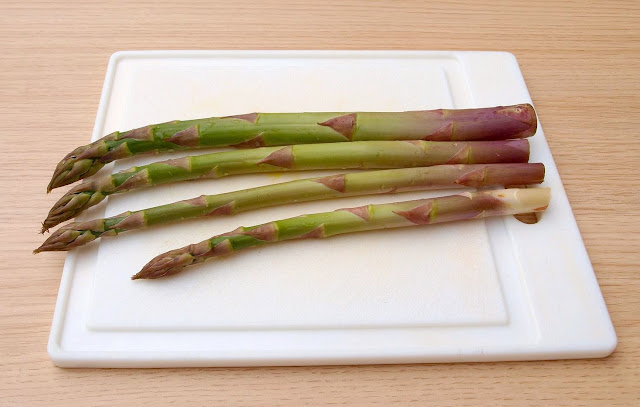 The bottom part of the spears will be a bit tough and fibrous, but the rest will be lovely and succulent. When preparing the spears for cooking, gently bend them and you will find that they snap at the point which is the boundary between the good bit and the not-so-good bit. Very convenient!

Eventually, when the harvesting season draws to a close for another year you must resist the temptation to cut more spears, and you just have to let them grow. Like this:

﻿The two-foot tall spear in the centre of this picture may at first sight look like a complete one-person serving of lovely Asparagus, but it will already be beyond the usable stage. Look closely at the tip:
The leaf-buds are already swelling and beginning to separate. Before long they will fall away from the main stem and look like this: 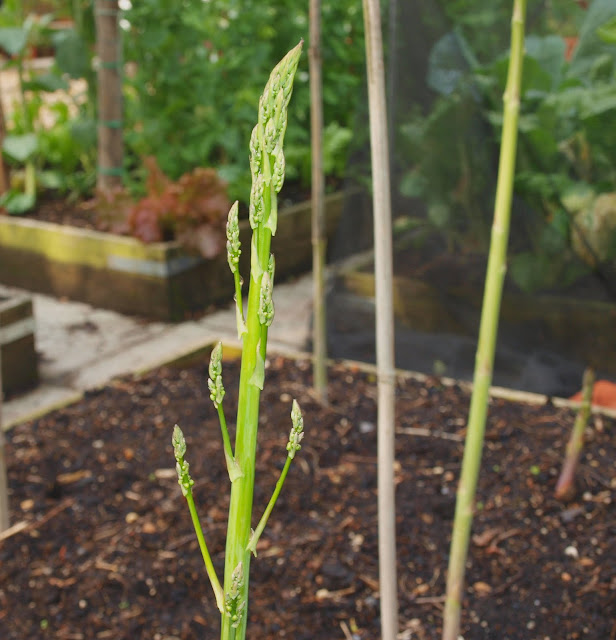 Eventually the plants will produce a lot of fern, and the bed will look like this (photo from 2010): 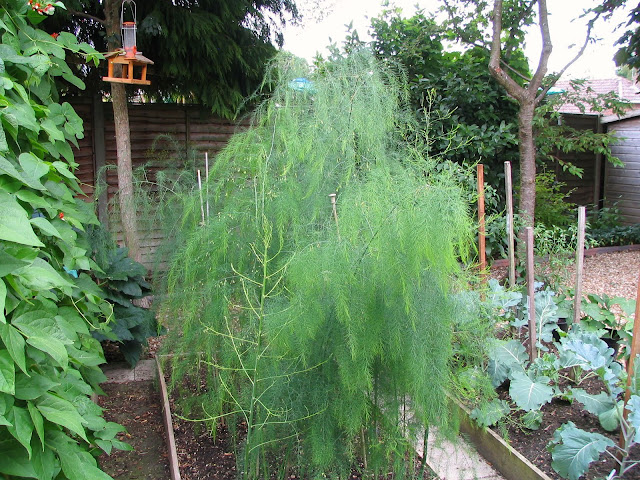 Hey, this picture from last year nicely demonstrates my crop-rotation! Climbing beans were in the bed where the roots are now (at left); and on the right of this photo (in the bed where my climbing beans are this year) you can see the plants that grew up to produce all that wonderful Purple Sprouting Broccoli this Spring...
I find that the tall Asparagus ferns eventually get top-heavy and will flop about all over the place, especially when wet, so it is best to provide them with some sort of support - like some string suspended from stout posts.
In the Autumn the fern will go yellow and die, at which point you need to cut it off at ground level. It will also probably produce some little red berries - its seeds. I suppose you could sow these and try to raise some new plants, but I haven't tried that so I can't offer any advice in this area. My Asparagus was bought as
1-year-old plants. 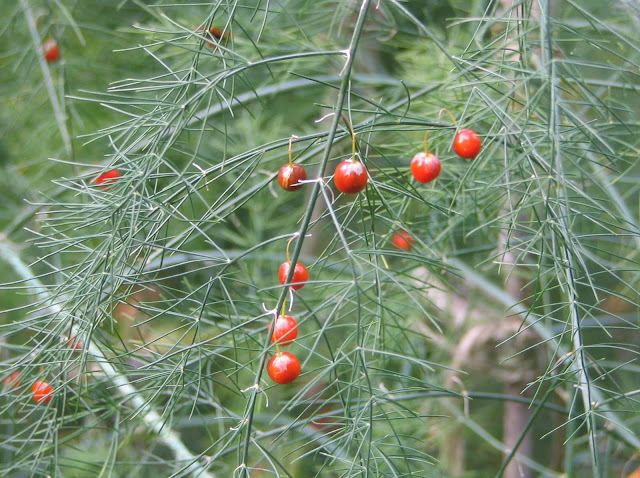 This week I applied a top-dressing of general-purpose fertiliser to my Asparagus bed to help it to recover from my recent depredations. Since then we have a had a bit of rain, which is welcome, because it will have helped the fertiliser to work its way into the soil.
Posted by Mark Willis at 17:30