An easy but impressive 3-course meal

Nice dinners don't necessarily have to involve huge amount of complicated "cheffiness". Here's one I put together for us on a day when neither of us had much time for cooking.

Starter: Roquefort and walnut crostini. These were made with "Roquefort & Walnuts Delight" from Brin de Provence. This wonderfully unctuous spread is too rich (and expensive) to have much of, but it is absolutely heavenly! 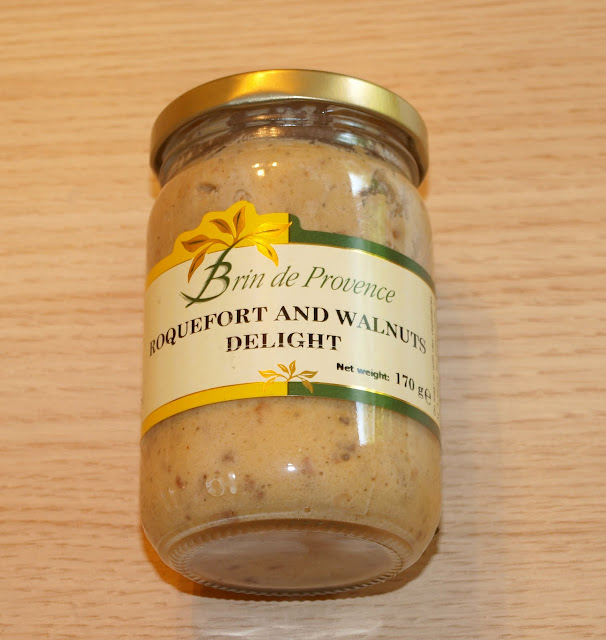 All you have to do is cut some pieces of bread (I used wholemeal) into fingers; lightly toast them, spread the Roquefort stuff on them, and then whack them under a pre-heated grill for a couple of minutes until the cheese begins to bubble. I garnished mine with a few sprigs of Land Cress and Celeriac microgreens. 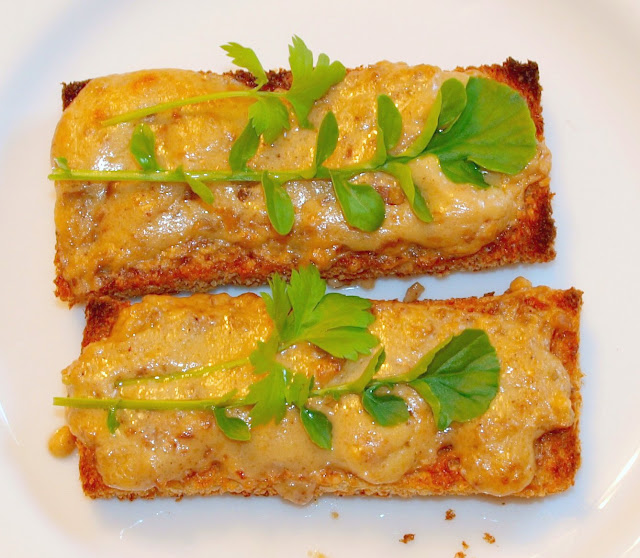 Main course was Ribeye steak. I cooked ours in a griddle pan that I had previously heated to a very high temperature. This allows the meat to cook very quickly, so that it doesn't go dry and tough. I know that our meat is probably not on a par with what all you lovely people like Diane in Texas can get, but it's definitely "not  bad" as we Brits like to say. This is before... 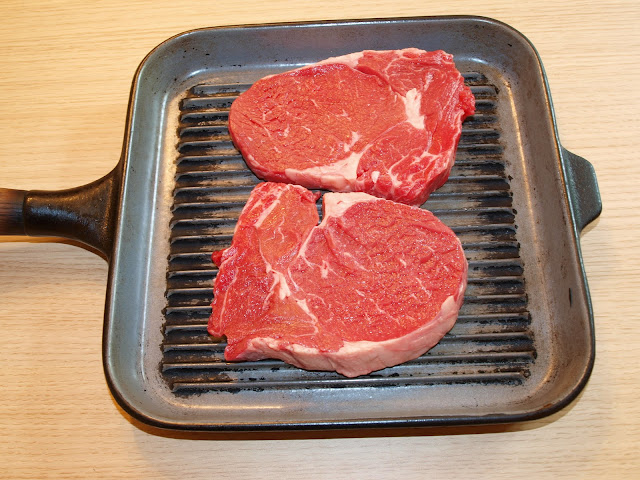 I think it makes sense to let the meat come up to room temperature before cooking, so I took it out of the refrigerator well ahead of time. I also marinated the steaks for an hour or so with a tiny bit of olive oil and lots of freshly-milled black pepper. As all the best chefs say - oil the meat, not the pan! This is after... 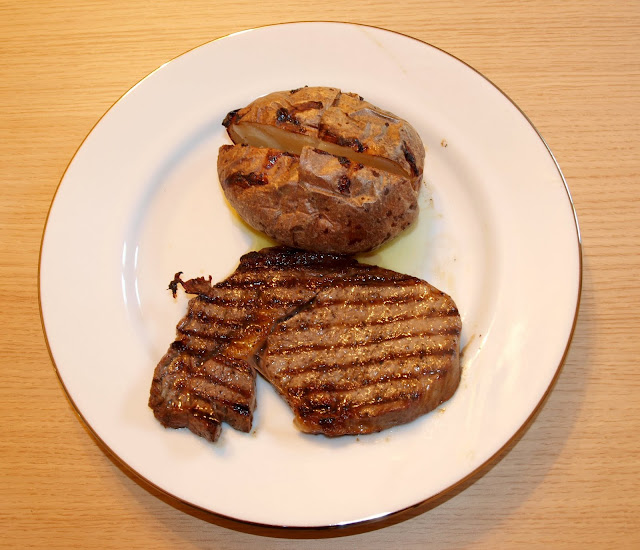 With the steaks I cooked some jacket potatoes. I'm sure you all know what potatoes are, but maybe you're not familiar with this very English way of cooking them. All you do is choose some large potatoes, wash them, (don't peel them, obviously!), prick them to stop them bursting, and cook them in the oven at about 180C for 90 minutes or so, until they are soft on the inside, but with crispy skins on the outside. To make the skins go even crispier you can rub them with salt before putting them in the oven. These ones are at the "Before" stage too. 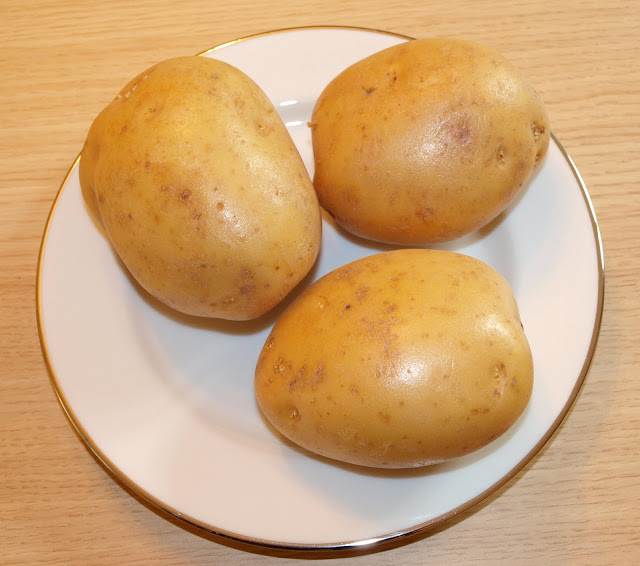 When the potatoes are ready they should be quite soft and pliant when squeezed. To serve, cut open and add a knob of butter, or perhaps some soured cream and chopped chives.

Along with the steak and potatoes I served two salads - one was a mixture of five types of lettuce from the garden: Little Gem, Webbs Wonderful, Fristina, Marvel of Four Seasons and Delicato. 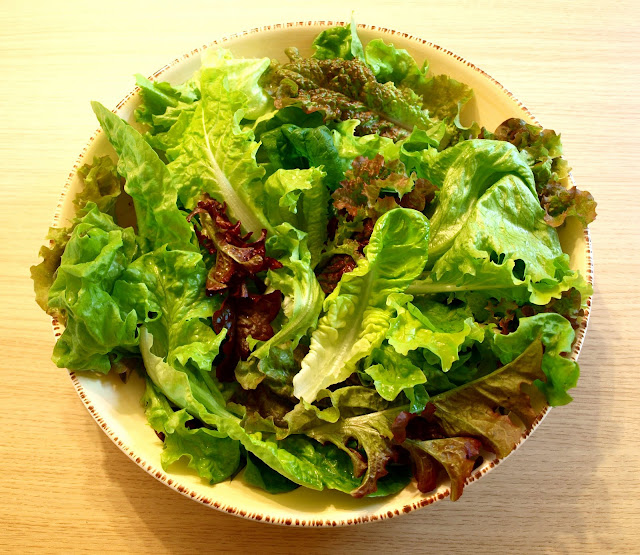 It's so nice to be able to produce a salad like that in a few moments, just with ingredients from your own back garden.  And growing salads is so easy - the plants can be grown with no specialist knowledge; they mature quickly; and they don't need a huge amount of space.

The other salad was a my signature "Gaucho salad"  - tomatoes with thinly-sliced shallot, thyme and red wine vinegar. The visual appeal of this salad is best when you use fruits of several different sizes and colours. Unfortunately my own tomatoes are nowhere near ready yet, so I had to make do with shop-bought ones. 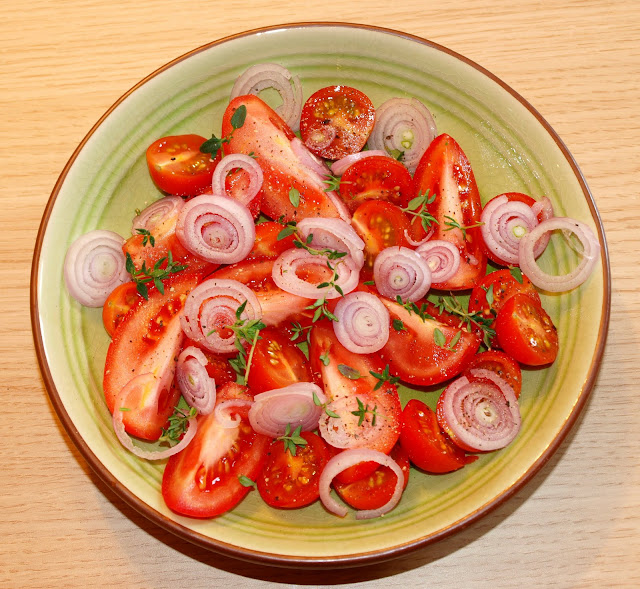 The key to success here I think is to add the vinegar at the right point. If you add it too early the tomatoes will go soft and a bit slimy, but if you add it too late it doesn't have time for the flavour to infuse. I reckon that roughly 10 minutes before serving is about right. The vinegar I used is one flavoured with Cassis (blackcurrants), which just gives it an extra little "Je ne sais quoi"...
﻿Dessert was fresh pineapple: No frills here - if the fruit is good, it doesn't need any. It WAS good... 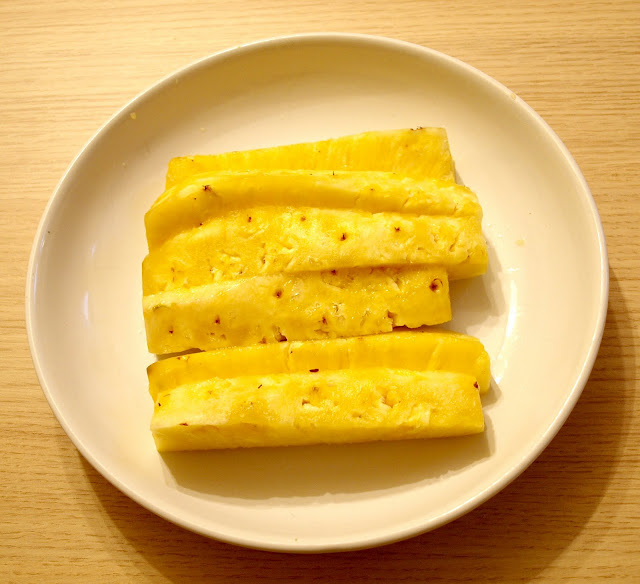 This particular pineapple (all the way from Costa Rica, via Tesco) was really sweet and succulent, and only took five minutes' preparation (a nice sharp knife is a pre-requisite here!). I only wish it had come from my own garden!

So - hardly more trouble than phoning for a Take-Away, but infinitely nicer!

P.S. Completely unrelated to this post... I found a new blog today (new to me, I mean. One I had been unaware of until this moment). It is called Busy Bee, written by Kalipso from Croatia. I sense that it may appeal to many of my readers - especially those who are interested in re-purposing and such-like. As well as maintaining a really beautiful garden, Kalipso does things like making plant labels out of broken terracotta roof-tiles, and cane-toppers out of the lids of empty perfume bottles. Go have a look, I think you will like it.