The other day fellow blogger Kelli Boyles wrote about slug damage to her Courgette plants, which prompted me to take a close look at my young Marrows. I didn't want them to suffer the same fate. Unfortunately, when I looked at my first (rapidly growing) Marrow fruit, I saw that it did indeed have a little bit of damage on the underside. It could have been caused by slugs, but it looked more like tooth-marks of little rodents. In response I decided to go for a "defence in depth" approach, as they would say in the Army... 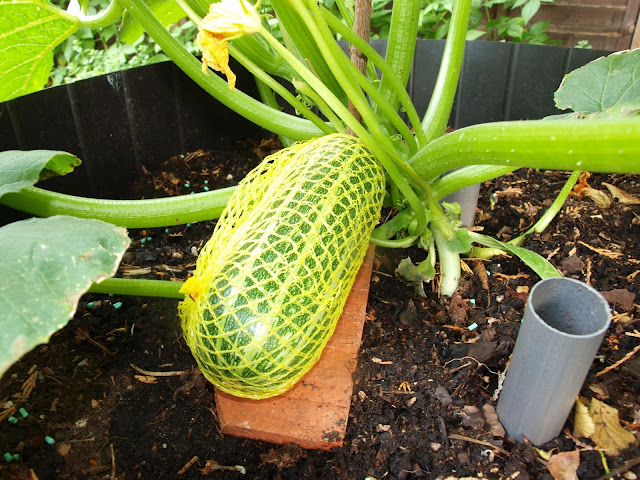 To ward off the slugs I sprinkled a few blue slug-pellets on the soil around the plant, but I also encased the fruit in a net bag that used to hold lemons bought from the supermarket - I'm hoping this might dissuade any rodents from nibbling! This bag won't last very long because the fruit will soon out-grow it, but I'm already on the lookout for a larger bag.

At the other side of the garden the cucumber plants are coming on a bit more slowly. I think they are perhaps less tolerant of the weather conditions, particularly the seemingly ever-present wind. At least they are now producing some flowers, some of which will hopefully be pollinated and produce fruits.


I'm glad that I have got both the Cucumbers and the Marrow in very large tubs, since it is easier to prevent them drying out in the hot, dry, windy weather conditions we have been experiencing.
Posted by Mark Willis at 17:30