My Purple Sprouting Broccoli is in full swing now, and we have already eaten a fair bit of it, but now the white type will also be ready very soon. It is a variety called "White Eye". The plants are quite compact - nowhere near as tall as the purple ones (This might be worth bearing in mind if you want to grow broccoli in a position that is exposed to strong winds) - but it is equally productive. The first shoots are showing colour now. They look like miniature cauliflowers. 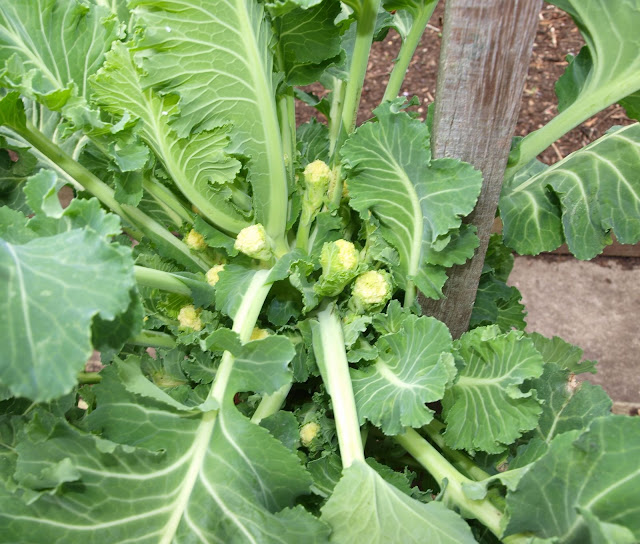 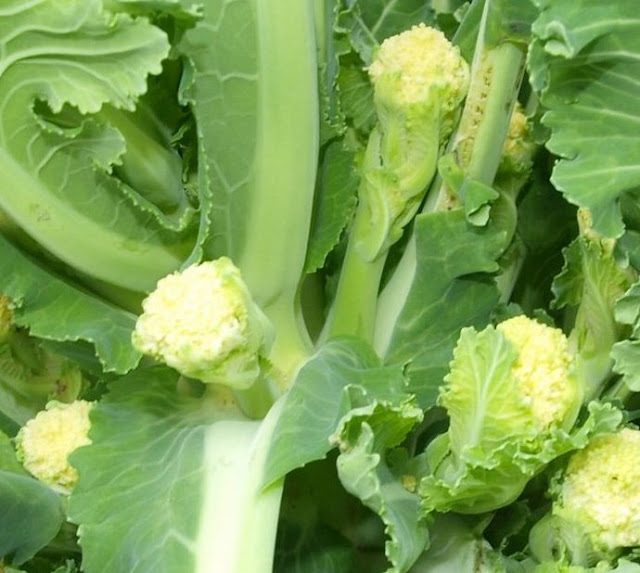 When harvesting the purple broccoli I was careful to cut each spear just above a leaf joint. This promotes the growth of secondary spears, as you can see in the next photo. The secondary spears are not as big as the primary ones, but they are still well worth having (of course they taste the same...). Because they are smaller cooking them is trickier, and needs less time. Try blanching them briefly in boiling water and then adding them to a pasta dish  - or into a stir-fry. 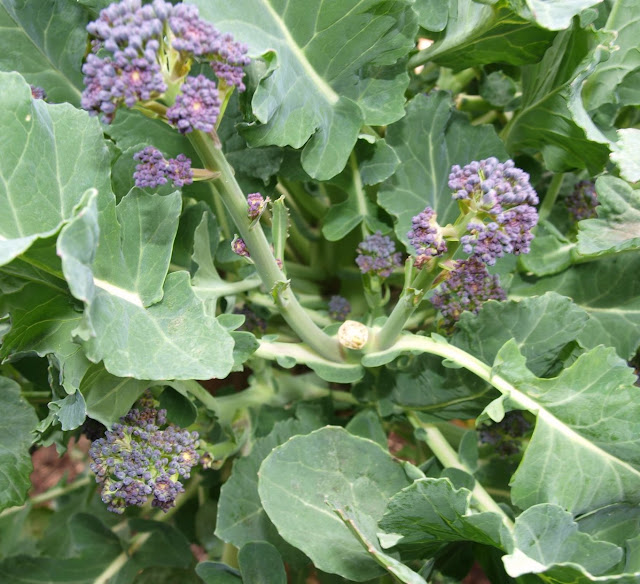 The same principle is applied to the main growing point of the plant - you cut this first, which encourages the plant to put more energy into the sideshoots. I normally get somewhere between 20 and 25 primary shoots from each plant, and about twice that number of secondary shoots. 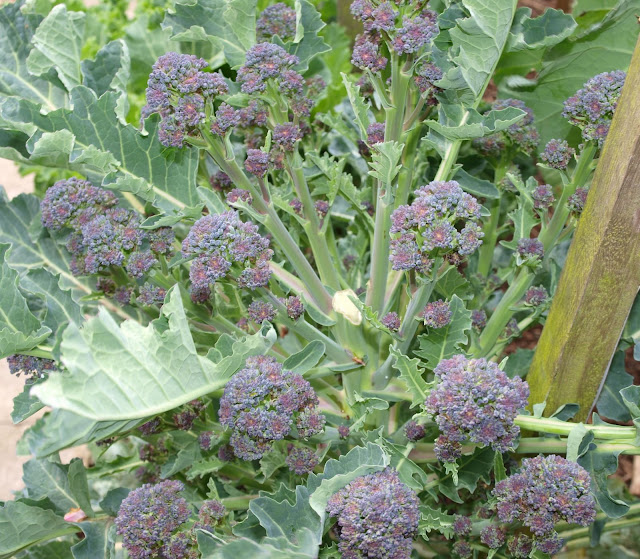 Here's a pic of a recent harvest. This little lot weighed-in at 540g. It's probably about 50 spears. Some (big) primary shoots, and some (smaller) secondary shoots. The new harvesting-knife is very effective, by the way. The thin curved blade means that you can slice off the broccoli spears at exactly the right point, even when this is in a position that is hard to reach. 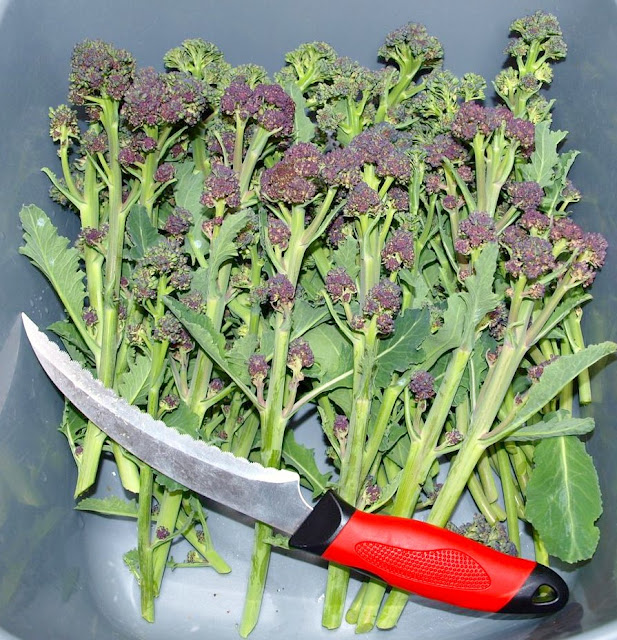 For us, a decent one-person helping is probably represented by 4 or 5 big spears, so unless you want to eat broccoli three times a day, you may need to investigate ways of keeping it. We use those "Stayfresh" bags [available in the UK from Lakeland], which keep produce fresh for a lot longer. I think that in one of them, PSB would keep (in the fridge) for at least two or three weeks after harvesting.

FOOTNOTE - Cavolo Nero
I decided in the end not to pick the sideshoots of my last remaining Cavolo Nero plant, but to allow it to flower instead. You can see that is has suddenly put on a burst of growth, and has shot up so that it is as tall as the PSB now. 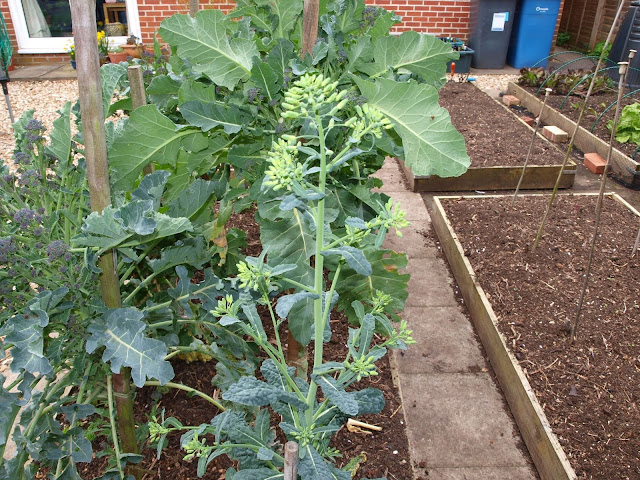 In a couple of days' time this will be a mass of little yellow flowers, like this... 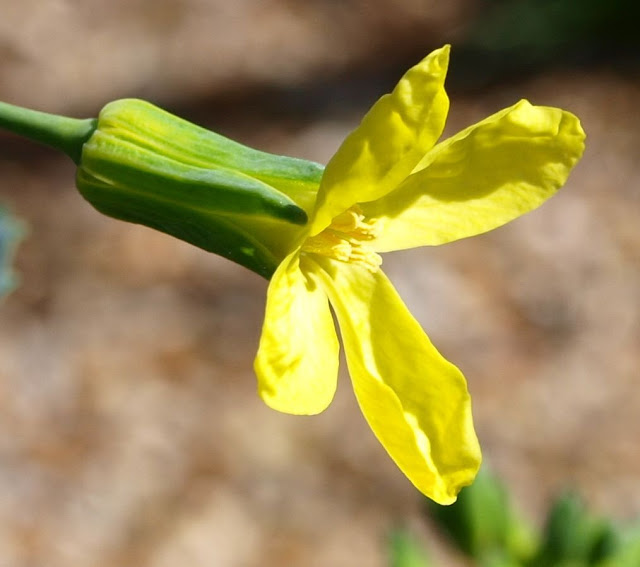 P.S. one of my blogging friends, Maureen, from Allotment Heaven is offering a great Giveaway at present. She has a copy of "The English Roses" by David Austin, to give away in a prize draw. Visit her blog for more details.
Posted by Mark Willis at 17:30