As keen cooks, both Jane and I consider it important to have a supply of culinary herbs close at hand. I have quite a few herbs coming on in the garden - some of them over-wintered, some of them grown afresh from seed.

This potted Greek Oregano looks quite smug after being protected in the garage throughout the Winter. Oregano is nice chopped and sprinkled over sliced tomatoes, or as we discovered a few days ago, added to an olive oil marinade for Mozarella cheese. 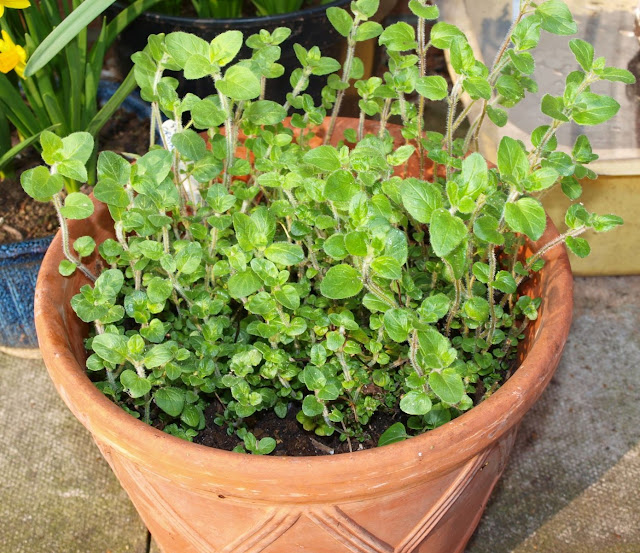 A close relative of Oregano is Marjoram (Origanum Marjorana). I have several clumps of it in the garden. We find that the flavour is very mild - much more so than the Oregano - so we don't use a lot of it in cooking. On the other hand, when it flowers the bees go absolutely mad for it, so it is worth having just for this. 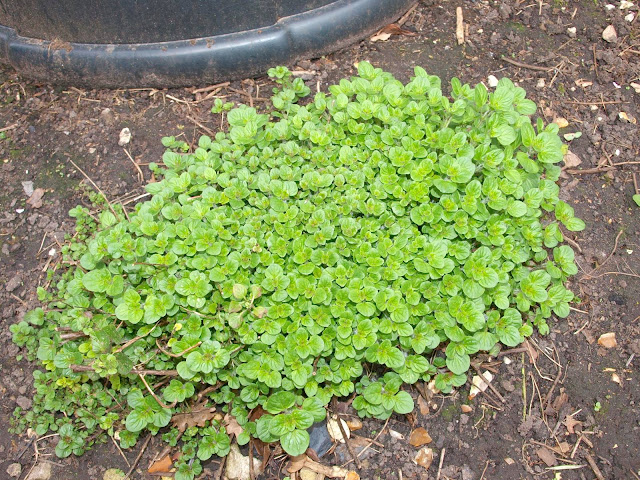 ﻿The Mint which I divided and re-potted on 14 February is putting up some strong fresh shoots. I'm not going to be tempted to pick any until it gets a bit better established though. 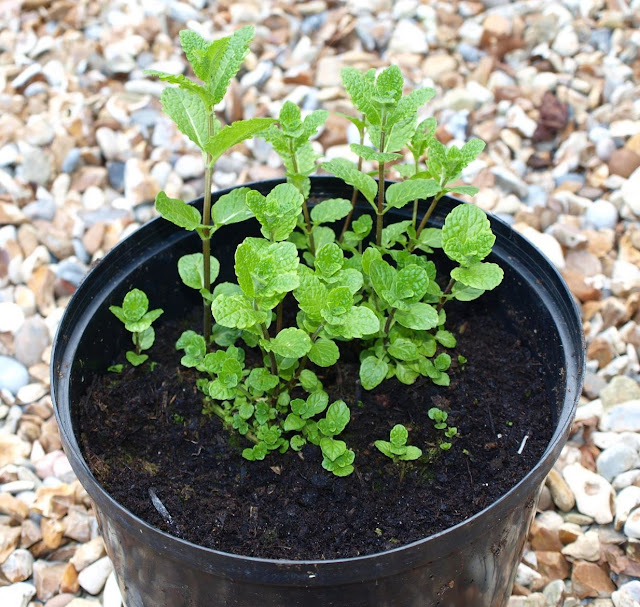 The Rosemary is not looking so healthy. It had a hard time during the very cold weather at Christmas-time, so I suppose I should consider myself lucky that it has survived. At present it is "OK", but hopefully as the weather improves it will perk up. The current leaves are mostly tough and leathery, and I will be looking to see softer new growth before long. 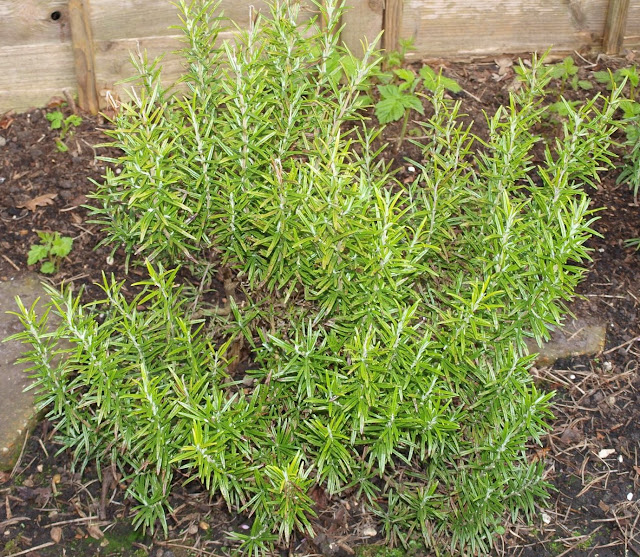 Here is a clump of Bronze Fennel putting up some new fern. We don't generally eat this herb (though you can). It is not as strongly-flavoured as the green variety, and it doesn't produce the fleshy bulb like "Florence" fennel. It's a good-looking ornamental plant though, with nice feathery fronds when it is young, and later on delicate little yellow flowers, followed by a mass of aromatic brown seeds in the Autumn. The seeds can be used as a spice too. 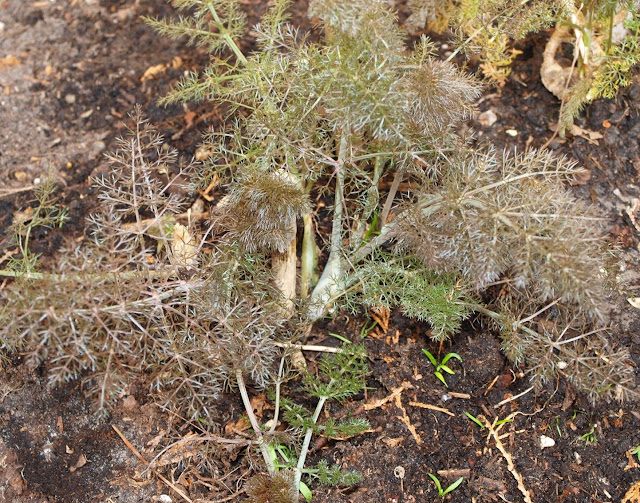 Here's a pot of over-wintered Parsley, growing nicely in the warmer weather. 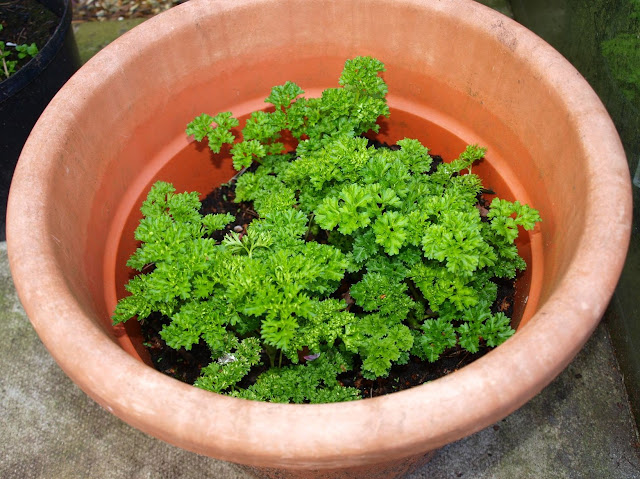 This is my next lot of Parsley coming on. I normally sow about three lots like this each year, trying to make sure I have always got some plants at their best. 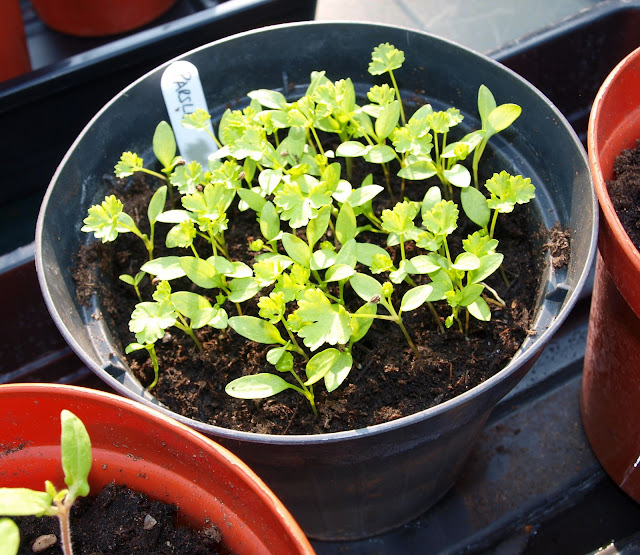 I have only got a few Basil seedlings. I don't grow this herb outside in the garden, because I don't think the weather in my part of the world is conducive to its success. Instead, I traditionally grow four pots of it on my Dining-Room windowsill. Three of last year's plants have survived until now, but they are looking distinctly tired, so it is time to start again. I think I will also sow a container of basil seeds to use at the seedling stage as a salad ingredient. I recently had in a restaurant a salad that included a lot of baby purple basil and it was lovely - tasty but not overpoweringly strong. 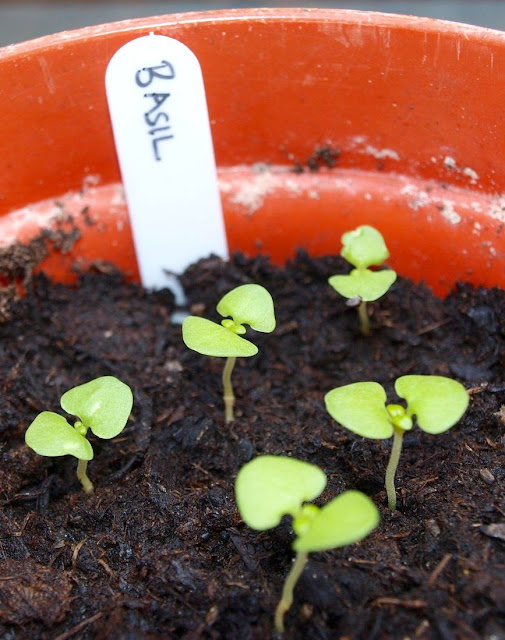 This year I am trying Savory - both the softer Summer type (an annual) and the woodier Winter type (a perennial). This herb is somewhat similar to Rosemary in appearance - or perhaps Hyssop - it has long slim leaves. It is particularly nice with beans, especially Broad Beans, and you don't often see it on sale, so if you want to cook with it you have to grow it yourself. 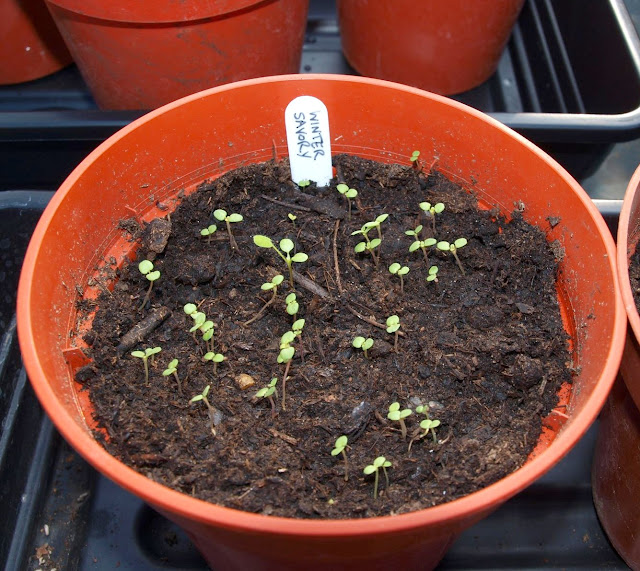 This pot of Winter Savory is too overcrowded - I will probably only need 3 or 4 plants - so I have thinned out some of the weakest seedlings. I usually do this progressively, removing the weakest specimens each time ("Survival of the fittest" you know!). I find that when dealing with very tiny seedlings this task is a lot easier done with a pair of tweezers. This next photo shows my first (failed) attempt at growing Summer Savory. As you can see, the seedlings went really leggy, presumably because of insufficient light levels, although it was sowed at the same time as the Winter Savory, and kept in the same conditions. There is no doubt though that these seedlings were beyond redemption, so they were ditched and I have sown a second batch of seeds. Hopefully they will do a bit better! 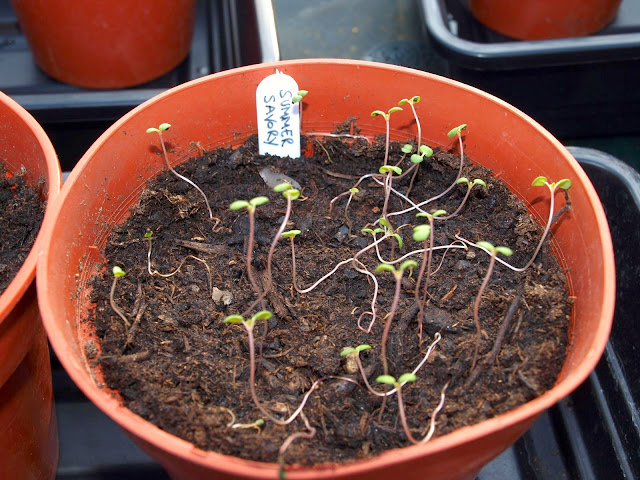 There was a time when my garden was mostly devoted to herbs - I had about 50 different types I think - but then I got more interested in veg and the proportion of herbs declined. These days I tend to grow mostly the herbs that we use in cooking rather than ones which are primarily ornamental.
Posted by Mark Willis at 17:30