Another way to use PSB

Regular readers will know only too well how much I like Purple Sprouting Broccoli! Unfortunately for me, the PSB season in my garden is nearly over for another year. It's been a good one.

At the weekend, Jane made us a meal based on some recipes she found in the April 2011 edition of the Waitrose Kitchen magazine. They are ones put together by Gill Meller, head chef at Hugh Fearnley-Whittingstall's River Cottage HQ. 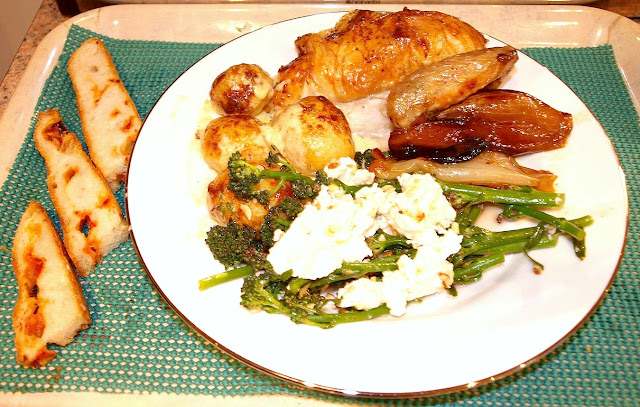 This was the menu:
Roast chicken with shallots and balsamic vinegar
Purple Sprouting Broccoli with Mozarella cheese and chopped hazelnuts
Baked early New Potatoes with cheese sauce
Focaccia with Rosemary and Chorizo

In the magazine the recommended dessert was Honey-roasted Rhubarb with vanilla ice cream, but we had home-made Profiteroles with vanilla sorbet and chocolate sauce.

The main course was wonderfully tasty and aromatic, because it included many different herbs and flavourings. For instance, the chicken was roasted on top of a layer of shallots and surrounded by 10 fresh Bay leaves, whilst the potato dish included several cloves of garlic, some crushed chilli flakes and a good sprinkling of fresh thyme leaves. The chicken was also basted at the half-way point with balsamic vinegar, which not only added flavour, but also helped to keep the meat moist and succulent.

The PSB dish is described in the magazine as a salad, but we ate it hot. The PSB of course cooks very quickly, and needs to be cooked right at the last minute and dished-up immediately, as it goes cold very rapidly as well - perhaps best therefore to call this dish a salad, so that no-one complains if it's cold! We noticed one strange effect. When you cook PSB it loses its purple colour and turns bright green, but for this dish you drizzle the broccoli with lemon juice just before serving, and we saw that the acid in the juice made the broccoli go slightly purple again.

The Focaccia loaf was practically a meal in itself, including as it did fresh Rosemary and chopped Chorizo sausage. It was lovely to bite into a piece of bread and find a crispy, salty, peppery chunk of Chorizo in every mouthful!

My PSB is nearly at an end now. Just the "tertiary" spears left on the plants. This photos demonstrates the difference in size between primary, secondary and tertiary spears. The tertiary spears are very thin and the stems grow very long. They have a habit of going stringy, so we tend to eat only the very tips. 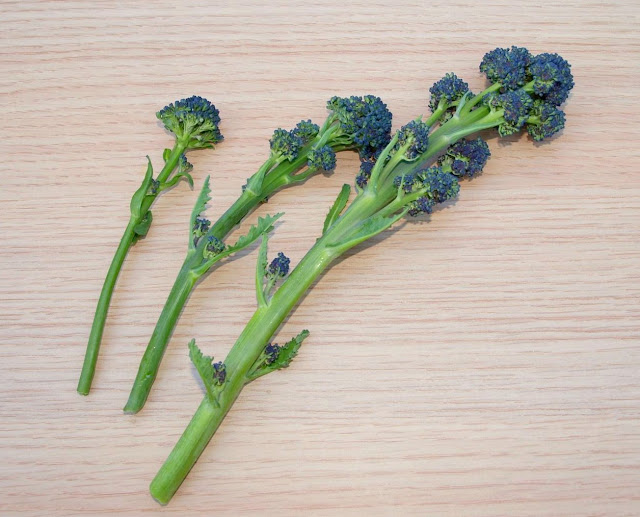 So, now it's the turn of the white Sprouting Broccoli. More on that tomorrow or later in the week...

P.S. Congratulations to Fiona, who on Sunday successfully completed the Paris Marathon in a time of 4 hours and 22 minutes, and raised well over £1000 in sponsorship money. Many thanks to those who sponsored her!
Posted by Mark Willis at 19:20