I'm a seed-sowing person, rather than a plant-buying person. Most of my veg come from seeds that I have sown myself, though I have to say that when I visited my local Garden Centre at the weekend they did have a wide range of very good-looking veg seedlings. The trouble is, they are very pricey: I don't really want to pay £2.99 for six seedlings of a fairly ordinary variety of cabbage. If I sow the seeds myself I can get as many as I want for that price.

This is how some of my seedlings are coming on.

The (Marketmore) Cucumbers and (Bush Baby) Marrows have germinated  - all 8 seeds. I sowed two seeds in each pot, intending to remove the weakest of each pair. 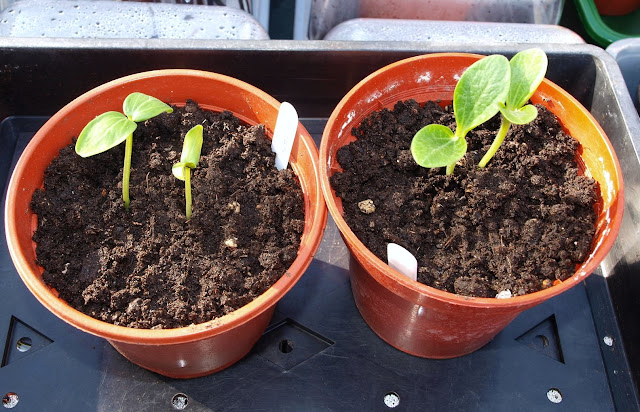 When it comes to choosing which of the Cucumbers to keep and which to discard, it seems a fairly easy choice on this occasion - the one on the left stays; the one on the right goes. 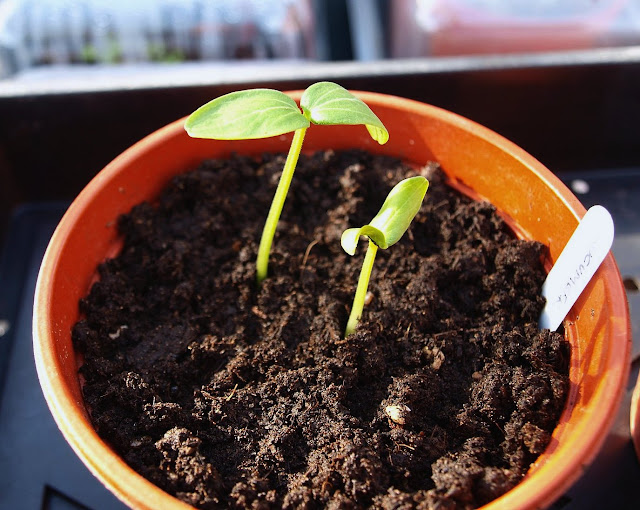 But what about these two Marrows? They both look equally good. What to do? 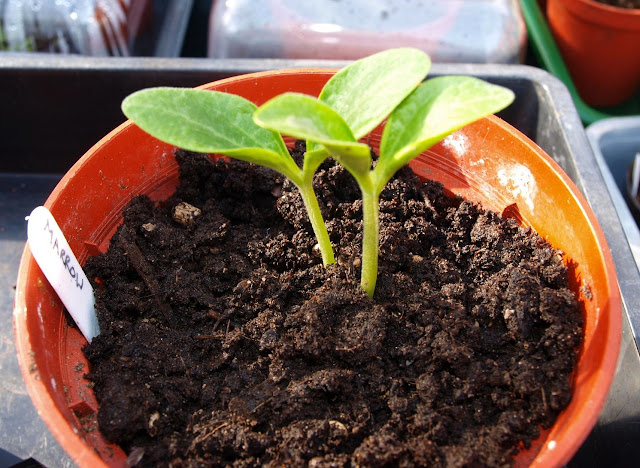 I took the easy way out actually: I removed one but potted it up into a separate pot as a Reserve.

My oriental Brassicas have been joined by Spinach, Chard and Lettuce. Notice my little gesture towards "saving the planet" - all these are in re-used containers. The 1kg flora tub at the front is sown with Purple Basil seeds which have yet to germinate. 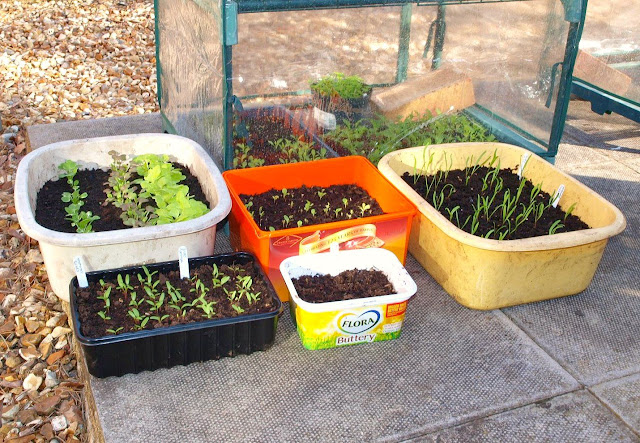 The bright orange Jacobs' biscuits container is probably going to be very useful, because it is nearly twice as deep as a commercial seed-tray. I drilled some holes in it to provide drainage, not in the bottom but in the sides, at a height of about an inch. This means that (in theory at least) there can be a layer of moisture at the bottom all the time, but if the moisture builds up too much, it will drain out through the holes. This is the container in question just after being drilled... 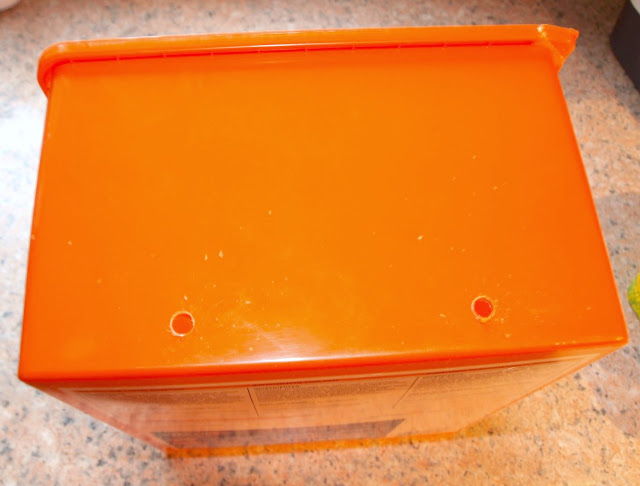 Do you remember the pictures of the Winter Savory I posted a few days ago? Well, today I did another round of thinning, and I noticed an interloper amongst the Savory - it looks like a Clover plant (note the 3-lobed leaf). Don't know where it came from, but this one definitely had to be removed. 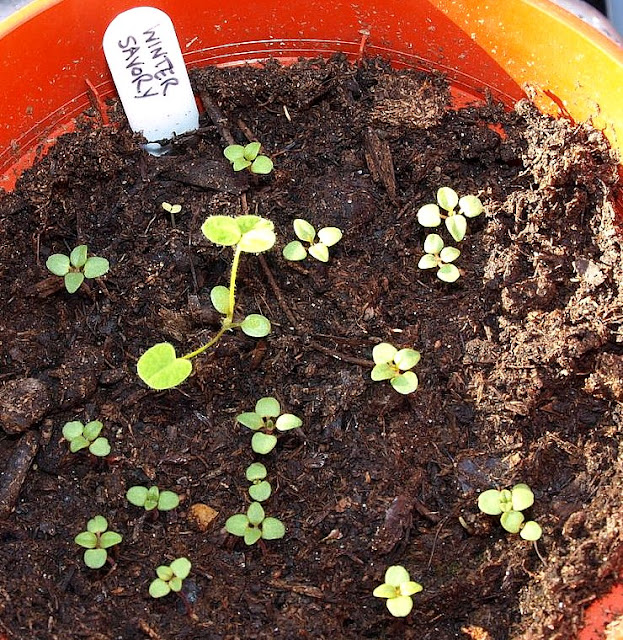 ﻿The second batch of Summer Savory is looking a bit better - the seedlings are still rather more "stretched" than I would like, but they will probably be OK. I have had these ones outside in one of the mini-greenhouses since immediately after they germinated, so that they have had the maximum amount of light. 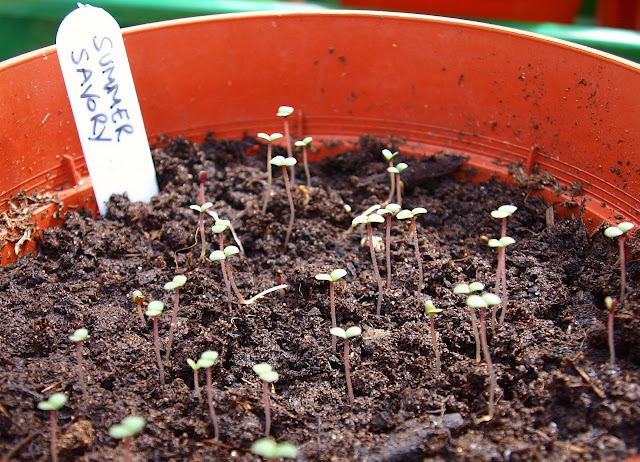 The lettuce seedlings are fine too. I sowed four different types in one seed-tray. Three of them came up very quickly, but the fourth has been very slow in comparison. All these will be subject to my progressive thinning regime, since I will probably only be able to grow half a dozen of each. I will sow another couple of batches later in the season. 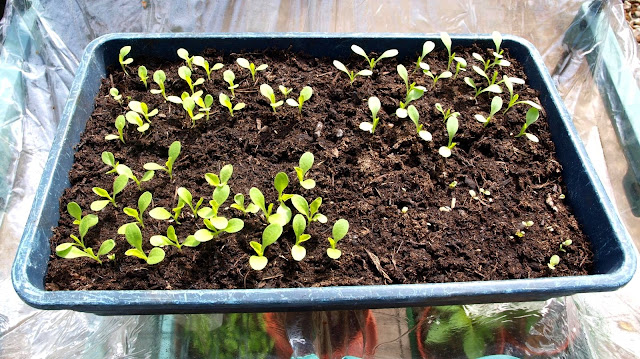 The Oriental-style Daddy Salad is progressing well - I reckon we will be able to start cropping this in a few days' time. 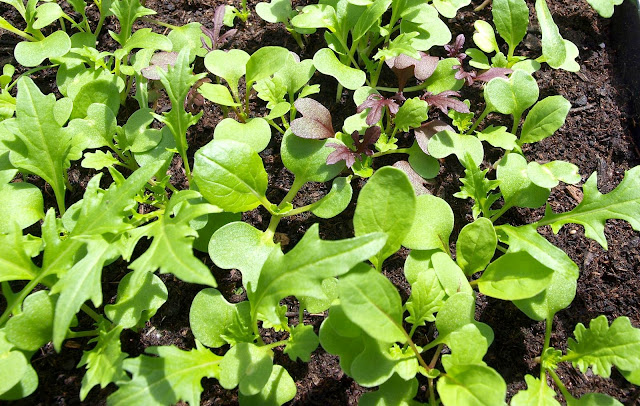 I can identify some Rocket plants in there now, as well as the Mizuna, Pak Choi, Cress and Purple Mustard. The one at the extreme bottom right of the photo looks to me like Texsel Greens (aka Abyssinian Cabbage), but then I could be wrong. Should be the makings of a pretty tasty salad!

I have also pricked-out the Celeriac seedlings. Having sown perhaps 30 seeds, I have now whittled them down to eight seedlings - of which probably only four will make it into one of my raised beds. I just don't have enough room for more! Apparently Celeriac is very sensitive to cold in its early stages, so I am not risking these outdoors just yet. Here they are residing on the windowsill of our guest bedroom...

We have had some great weather these last couple of days - bright, sunny, still, warm (up to about 20C in the middle of the day!) - so all the plants are growing strongly. There is a down side to this though: I may have to get the hosepipe into action at the weekend. I read in the newspaper that the UK has had the driest March since 1953, with about half of the "normal" rainfall for that month. Swings and Roundabouts come to mind...
Posted by Mark Willis at 17:30