Not long ago I was complaining about the weather being cold, wet and windy; now it's too hot! In common with most of Europe we in the UK have experienced record-breaking temperatures over the last few days, though thankfully it has not been as bad here as in parts of France and Spain. We've had 30s; they've had 40s (C). Also, in typical British Isles fashion, our hot spell has only lasted two days, whereas I suspect that if you live in Southern Spain you have to be prepared to suffer for several more weeks.

Of course a lot of damage can be done to a garden even in three days of scorching heat, especially if your plants have recently been enduring temperatures at the opposite extreme. After getting back on Thursday afternoon from our little trip to Dorset one of my first jobs was to put back in place all the pot-saucers which I had only removed a few days earlier because the plants were in danger of getting waterlogged! 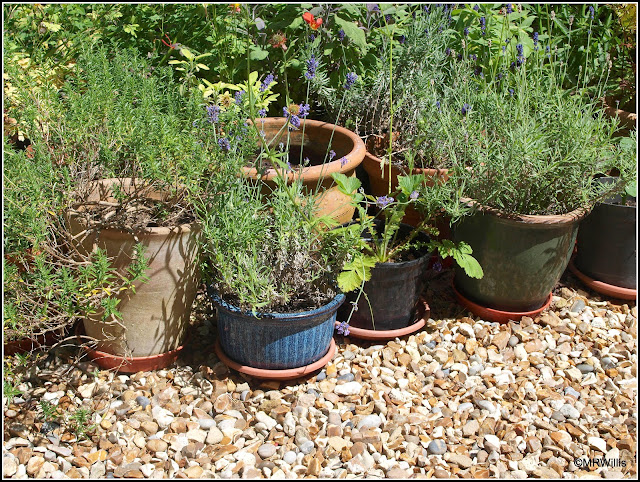 These very simple devices can literally be life-savers for pot-plants. Often, when you water a pot much of the water simply runs through the soil and out of the bottom of the pot, so the benefit is largely lost. This effect is most marked when the soil in a pot is already baked hard and dry, causing it to shrink and to lose its ability to retain moisture. When you put a saucer under the pot more of the water is retained and made available for the plant to absorb over a long period of time. These very droopy Brussels Sprout seedlings, for instance, would be in dire straits without their saucers. 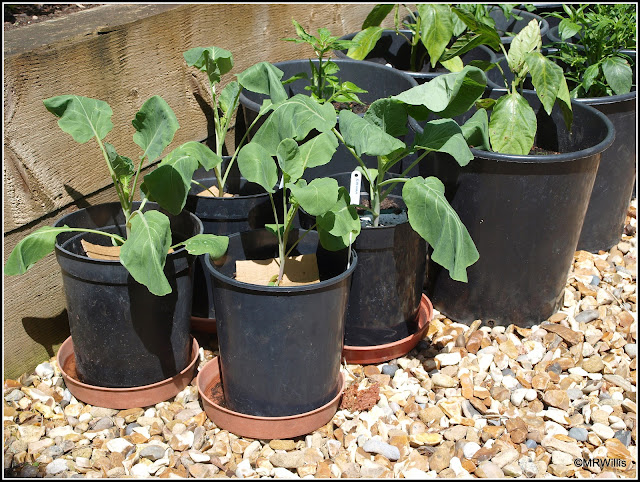 If you don't have any purpose-made pot-saucers you can always improvise. Here, small pots of PSB are stood in a deep seed-tray which is periodically filled with water to a depth of a couple of centimetres. An old washing-up bowl works well too! 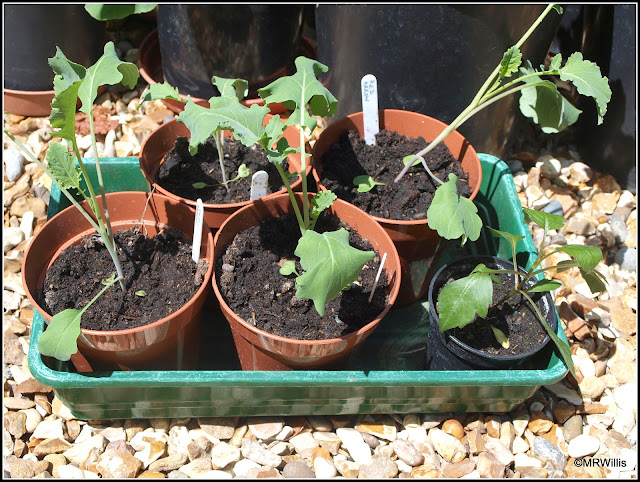 A large gravel-tray is in use here with a big terracotta planter: 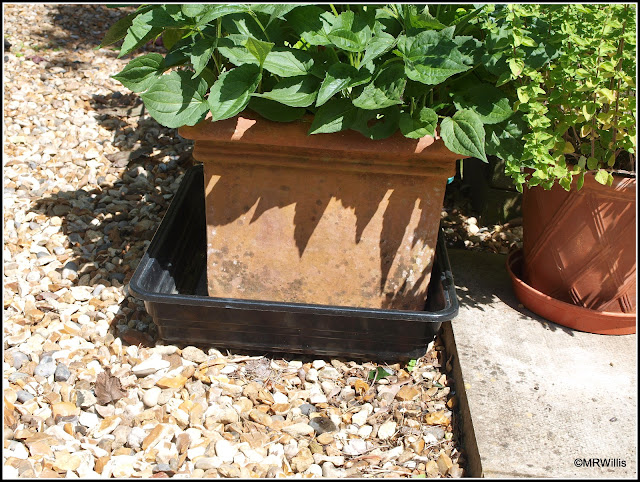 I have been using my hosepipe to water the raised beds, borders and other plants not in pots. Using a watering-can to do the task would take ages! I like to do my watering at the end of the day if possible, so that my plants have a long spell of relative coolness to absorb their drink, but I have to admit that when the weather is very hot and sunny I do occasionally have to do some of what I call "First Aid Watering" in the middle of the day too. The soil here is very sandy and even with the addition of loads of homemade compost over the years it still drains incredibly rapidly.

I suppose that in the foreseeable future climate Change is only going to intensify, and we must expect to get more extreme weather events, and more unpredictable weather. This being so, I think gardeners are going to be looking for plants that are more robust and especially ones that will withstand hot dry conditions (and cold, wet ones too I suppose!). This Cordyline of mine might be an example of this. 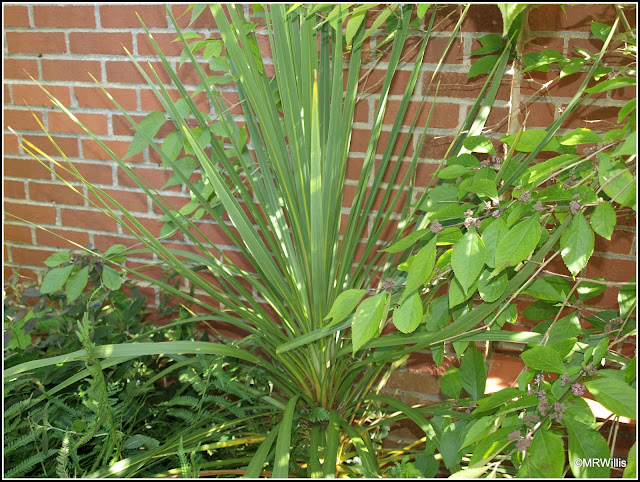 I wouldn't say it's particularly beautiful (other more colourful varieties are available), but it was free - it's a "volunteer". In other words it just arrived in my garden uninvited. [Actually there are two, but one is very small and not visible in that photo.] Furthermore, it has survived for several years with practically no attention. It endures the cold of Winter without visible discomfort, and even in the hottest part of Summer I seldom water it. A classic low-maintenance, robust plant, I'd say.
Posted by Mark Willis at 12:30