We have had wet weather here for the last ten days or so, including some very heavy and prolonged rain for a change. Most of the rainfall we have had in the past several months has been light and very infrequent, so the plants in my garden must have had a surprise. Some of the effects of this rain have been beneficial, for instance plants previously parched and thirsty have now had their thirst well and truly quenched. My Broad Beans are definitely in this category, and I think the rain has come at just the right time for them. The plants are covered with swelling pods, some of which seem nearly ready to pick: 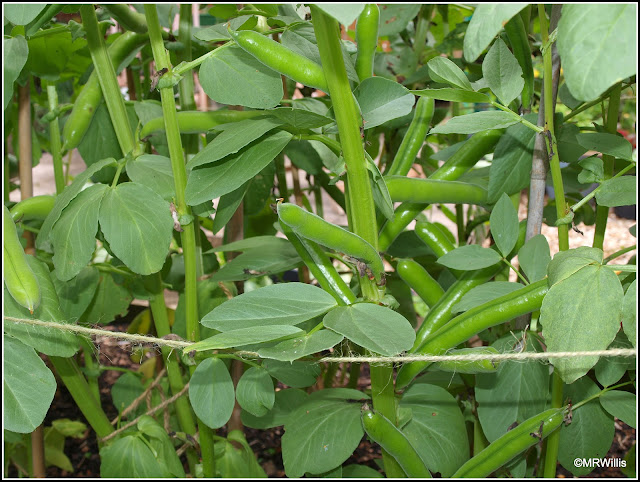 My climbing beans (Runners. French, Borlotti) are also happy to get lots of moisture and are now romping away up their poles. The Runners even have their first flowers: 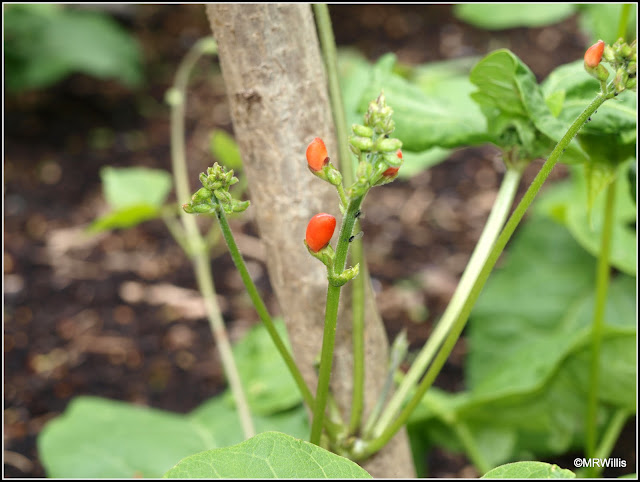 On the other hand, some plants are clearly NOT happy. My onions and shallots were beaten down by the heavy rain, and are also suffering from the reduced light levels. This is one of my clumps of "Ailsa Craig" onions. [You may remember that I'm experimenting with growing some in clumps and some singly.] No sign of bulbing-up here yet - though I daresay these would make decent salad onions! 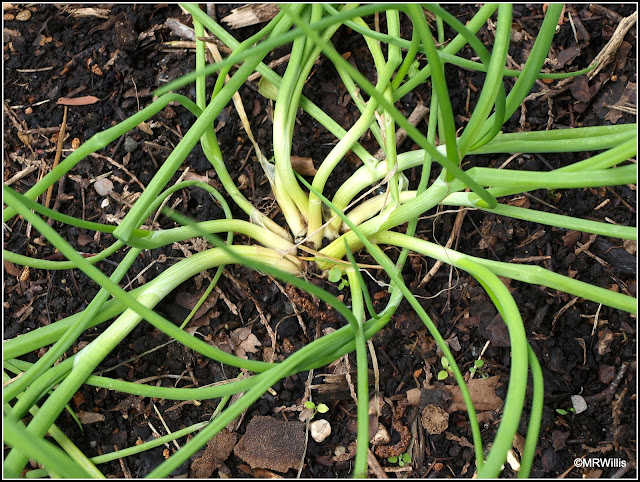 This is one of the shallots - I don't know which variety this is, because it came from last year's crop at my Courtmoor Avenue plot, grown from "inherited" stock. At least these are beginning to swell. 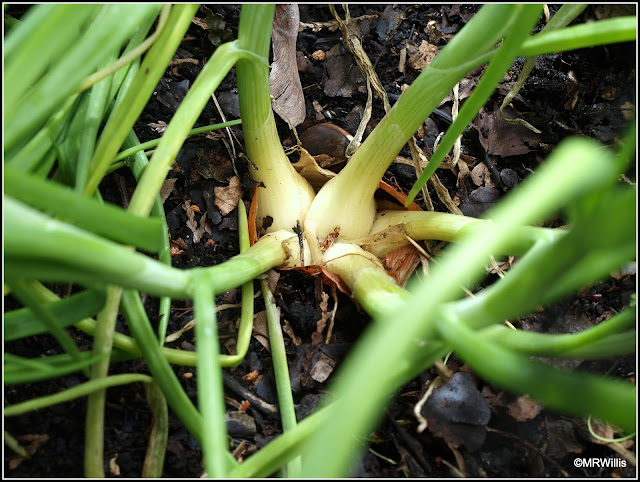 The plants which dislike the cold and wet most are the tomatoes and chillis. You will have seen me writing about the weedkiller problem that has beset my chillis once again this year, so you won't be surprised to hear that many of them are in poor condition, like this one: 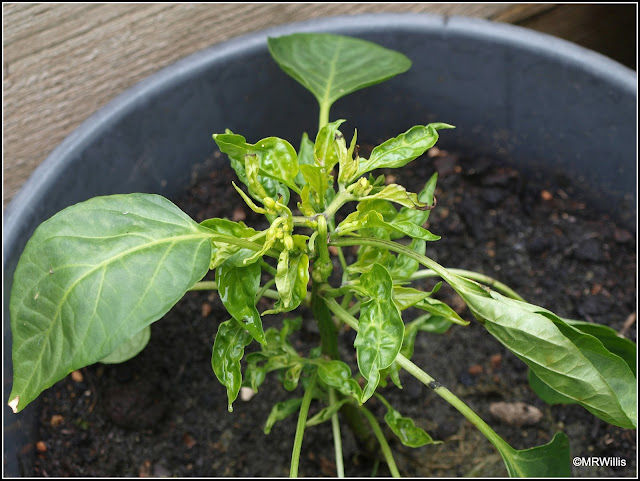 All is not lost though, and I still have a few that look OK. This one is an "Aji Limon". It has a bit of wrinkling in the leaves, but overall I think it looks all right, which is fortunate since this is my favourite variety of chilli. 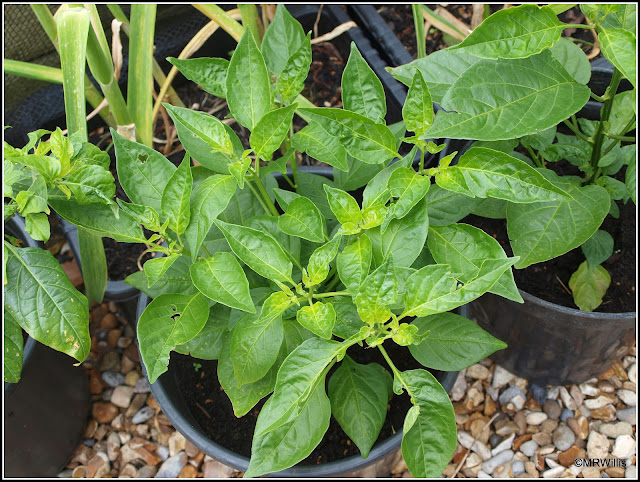 My tomato plants have mostly done very little for the last couple of weeks - surviving rather than thriving. They really need some warmth and sunshine now! I would also like to feed them (I use "Tomorite"), but that has to be applied diluted in water, and the plants really don't want any more water just now! In this next photo you can see the water seeping out of the pots during one of our infrequent dry spells: 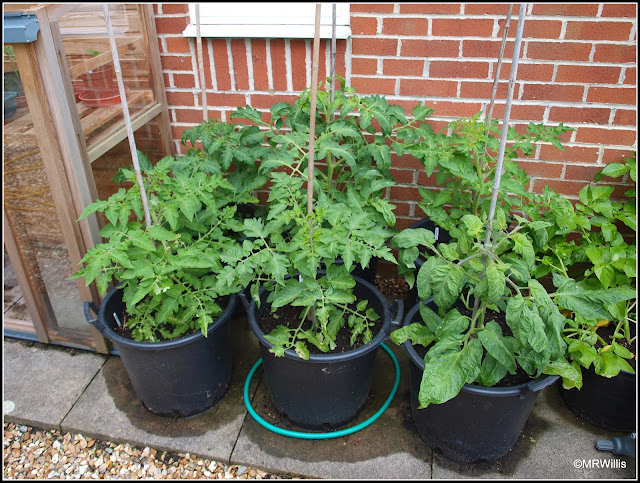 You would think that Watercress would be happy to get very wet, wouldn't you? However, mine (growing in pots of compost) would actually like to be dry right now. It has flowered and has set seed-pods, and I'm hoping to collect seeds from these when they mature. 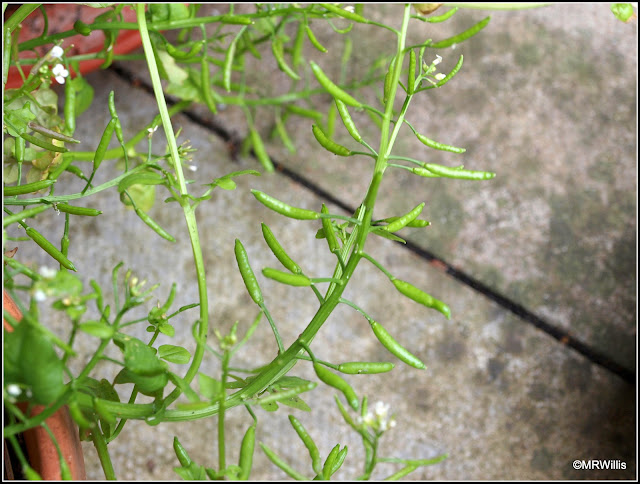 The recent rain has been beneficial in another way - it has persuaded the fungi to get started. I went out into the woods near Fleet the other day and saw literally hundreds of fungi popping up. they were mostly members of the Amanita family, like Amanita rubescens ("The Blusher"), Amanita fulva (Tawny Grisette) and Amanita excelsa (Grey spotted Amanita).


I haven't yet seen any of the highly-desirable Ceps / Boletus edulis yet, but I did spot some very tiny Chanterelles (Cantharellus cibarius), which will hopefully grow to worthwhile size in a week or two...