The amazing volume of my tomato crop this year was the result of two main factors: sustained hot weather during the Summer, and the absence of blight. Blight is a very common and very destructive fungal disease, and unfortunately it strikes my garden nearly every year.﻿ It likes warm, humid conditions best, so it usually appears in mid - to late Summer, about the end of July or early August. This year it made a very late appearance, in late September.

I have been harvesting copious quantities of tomatoes. I wish now that I had weighed them all, because I think it would be an impressive tally by now. 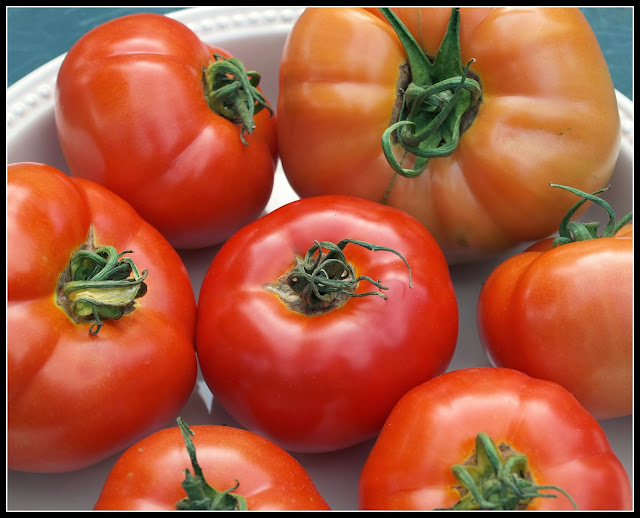 I think I must have harvested about 90% of my crop by now, and there are only a few fruits left on each plant. 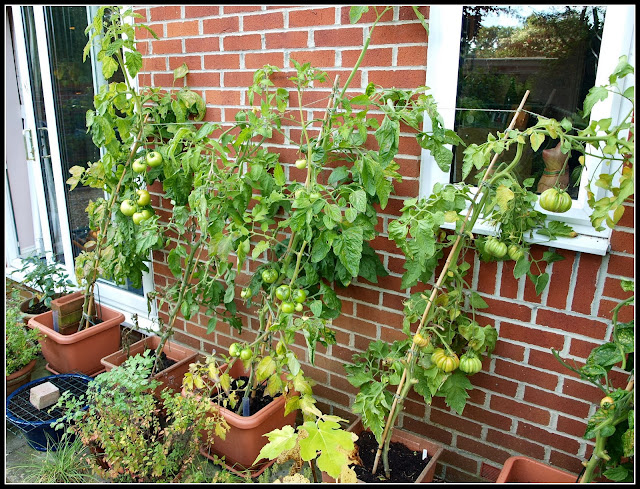 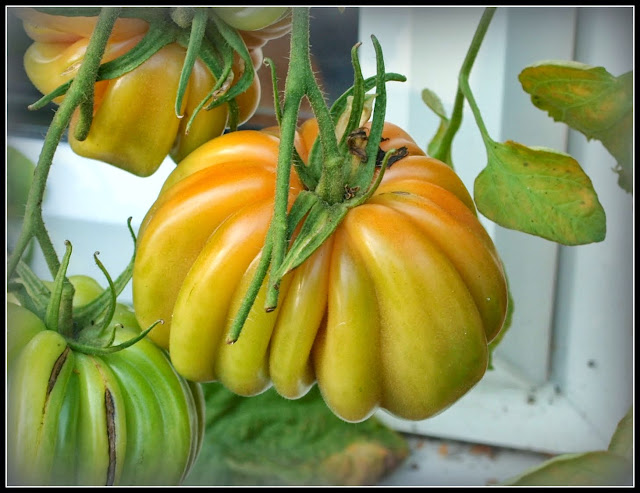 ﻿
These two remaining "Red Pear" ones are nowhere near ripe yet, but they are good examples of their type - classically "pear-shaped". 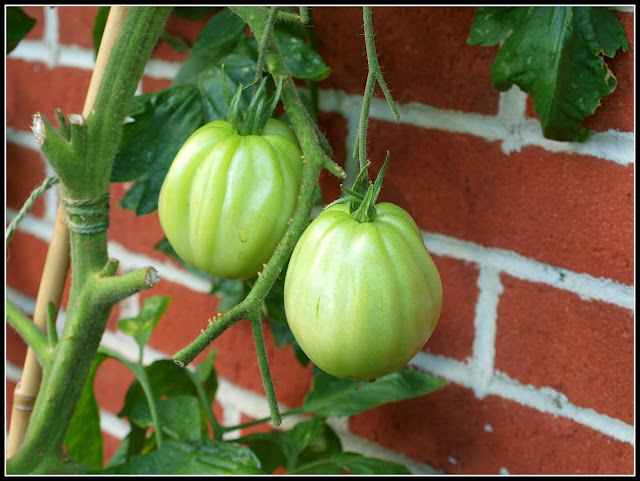 But.... (there's always a "but", isn't there?).  Blight has finally arrived. One or two of the remaining fruit are showing brown patches, like this:
﻿ 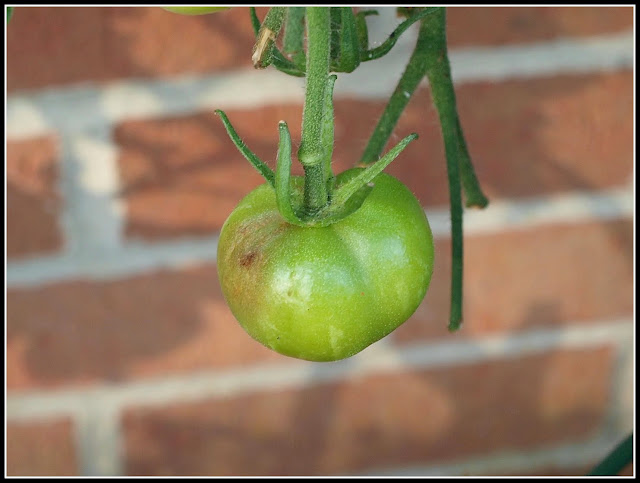 Once this happens, there is nothing you can do to save the fruit. It is doomed. The plant on which this fruit is growing is seriously affected by the blight. The lower leaves have shrivelled and gone brown, and the stem is mottled with dark brown patches. Not a pretty sight! 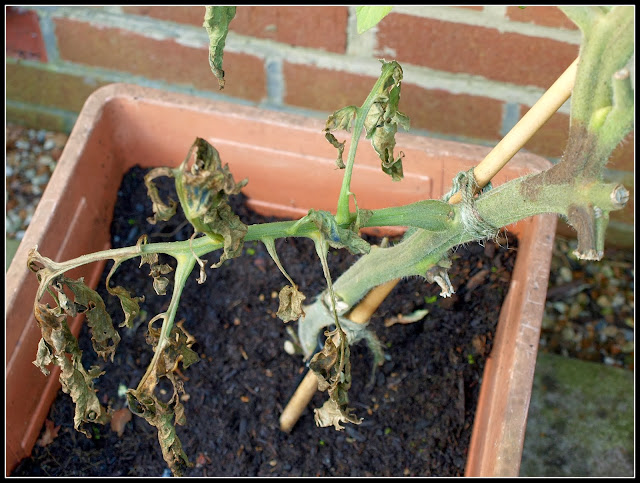 Next door to that badly-affected "Cherokee Purple" plant, one of the "Orkado" ones is just producing its second crop. By this I mean the plant which I grew (as an experiment) from one of the side-shoots I pinched-out, is just delivering fruit of a viable size. 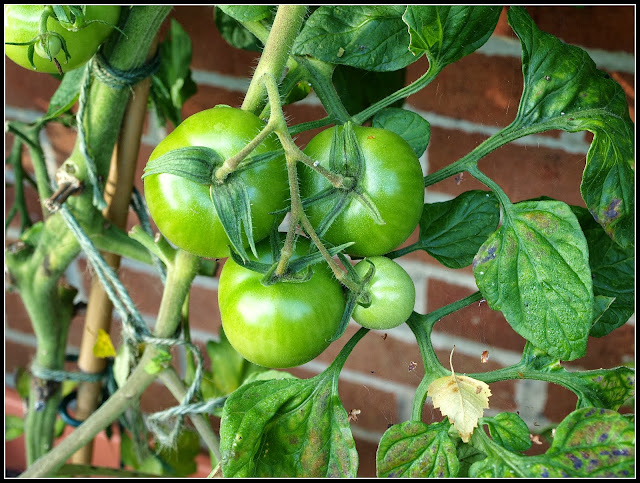 ﻿
They are still very green, but otherwise OK. They might just make it before the blight takes a hold on their parent.

Right now I am picking the fruits as soon as they begin to show any colour apart from green. I then bring them indoors and wash them thoroughly to try to remove any blight spores they might be harbouring, before adding them to the collection on the Dining Room table. Even then, I check them frequently to see it any of them are showing signs of blight. Unfortunately one or two have succumbed.

The "San Marzano" plants, which I grew down at the bottom of the garden under a tree, developed very much later than the others. This means that they have produced only a fraction of their crop before blight has started attacking them, so I have picked the fruit green (throwing away about 10% which was already infected), in the hope that they will eventually ripen indoors. I got 1.5kgs: 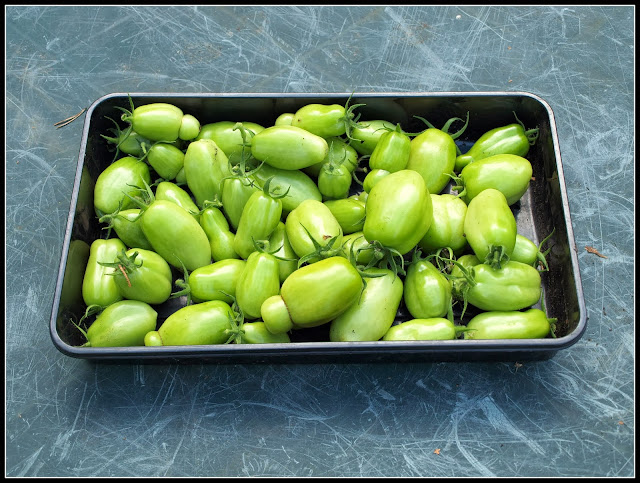 Several of them have a very odd two-section shape: 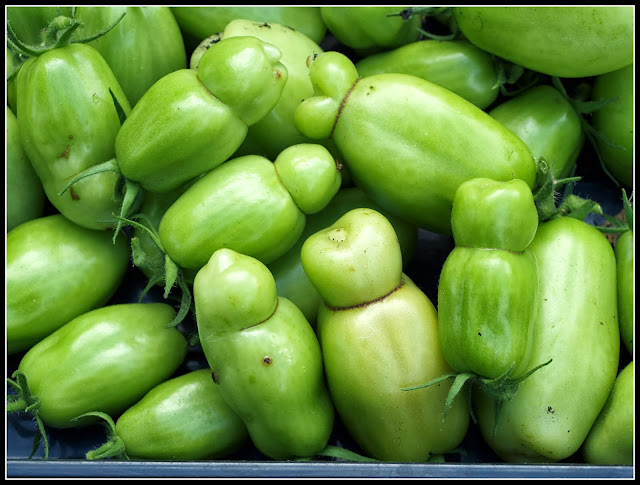 Despite all the talk of disease I am very satisfied with this year's tomato crop, and I got the harvest in, just in time. I therefore "thumb my nose" to the blight, which this year left it too late to do me any significant damage. Phew!
Posted by Mark Willis at 12:00