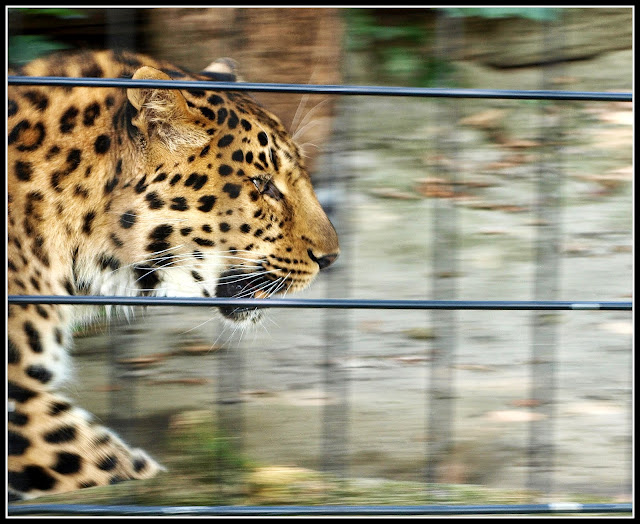 ﻿Some of you may have seen my post about the Central Railway Station at Antwerp, where we stayed last weekend. Right next to the Railway Station and just a hundred metres or so from our hotel is the entrance to the world-famous zoo. This photo shows the entrance / cafe building of the zoo with the station towering over it in the background. 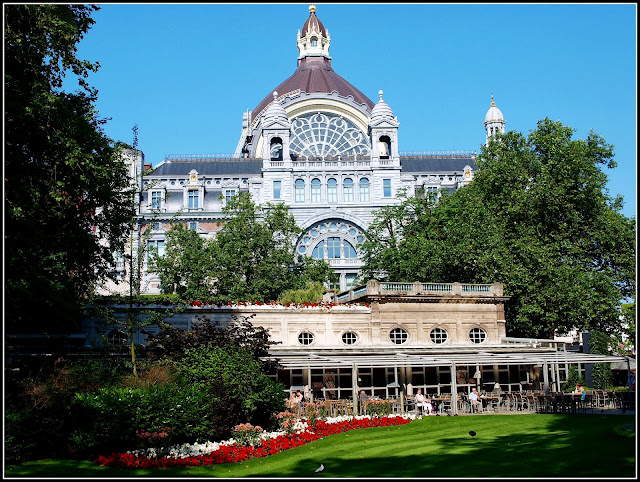 The zoo is a really good example of the "Zoological gardens" genre. It is immaculately presented, with manicured lawns (you are not allowed to step on them!), beautiful shrubs, trees and flowerbeds - and most importantly well-designed animal enclosures containing animals that are obviously well cared-for and in good condition. In a way it seems wrong to deprive an animal of its freedom in any circumstances, but if you must do it, you should do it like Antwerp Zoo does it. The place was full of families with children who were taking a close interest in the animals, so hopefully some of these young people will grow up to care for animals and take an interest in their conservation and the preservation of their natural habitat. 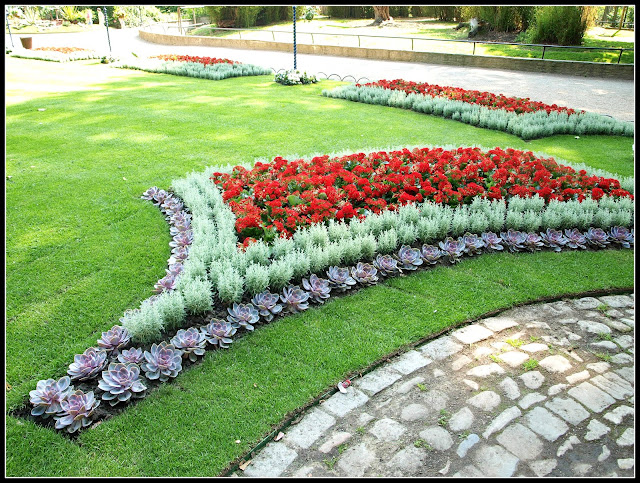 This is an Okapi. Antwerp Zoo has taken a special interest in the conservation of this rare and shy animal. Look at the lovely house the Okapis live in too! 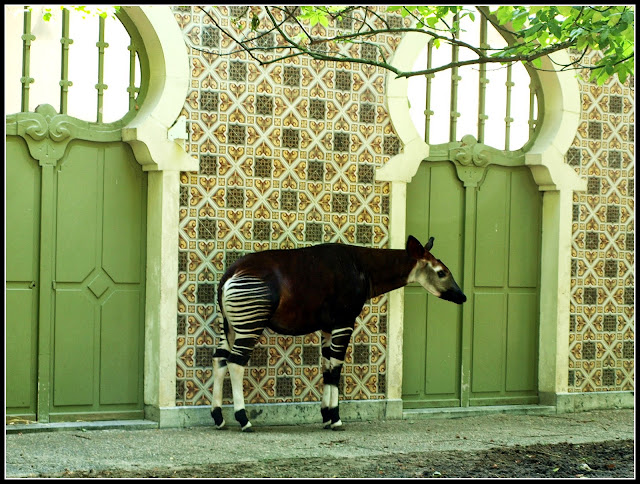 This is the Giraffe house: 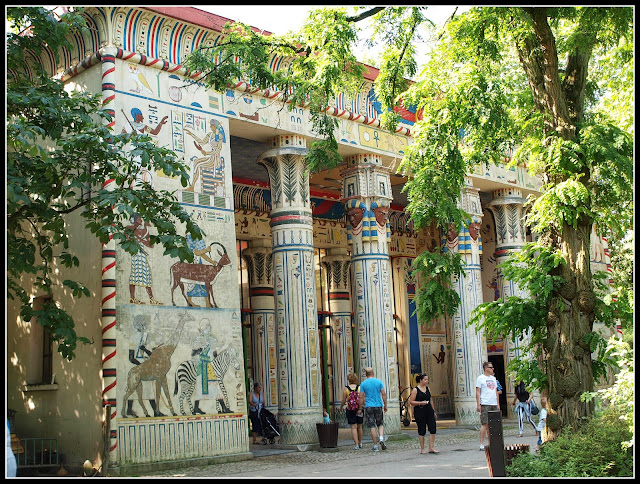 And here is one of the Giraffes (they had at least 5): 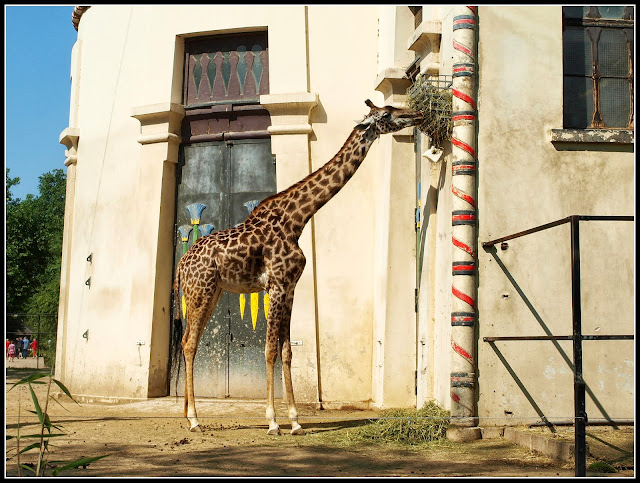 The gardens were heavily populated with statues and "compositions". Here are a couple: 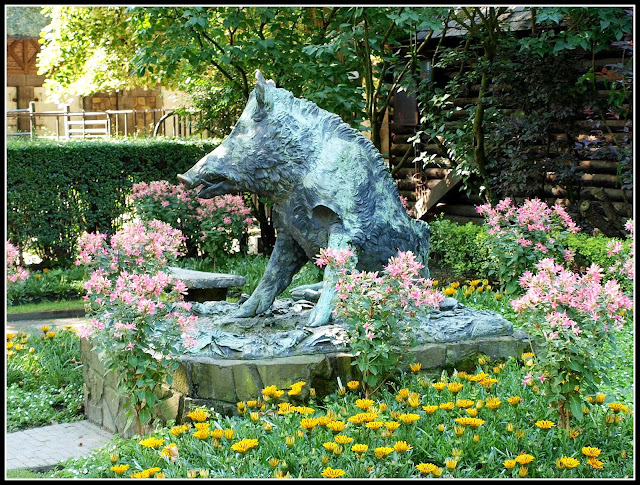 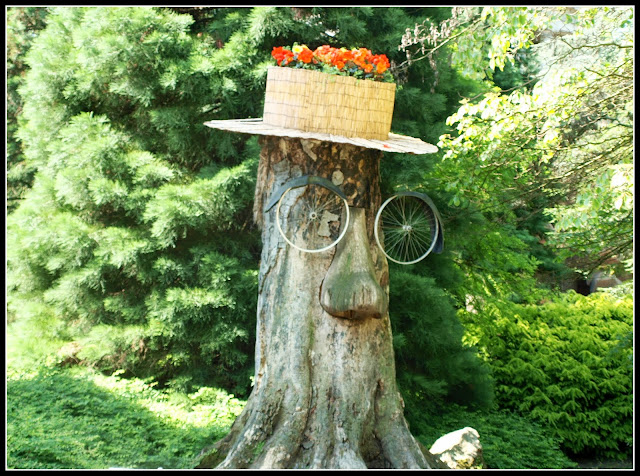 The day we visited the zoo it was very hot, but the zoo still managed to keep the Penguins cool. Their rocks were strewn with crushed ice: 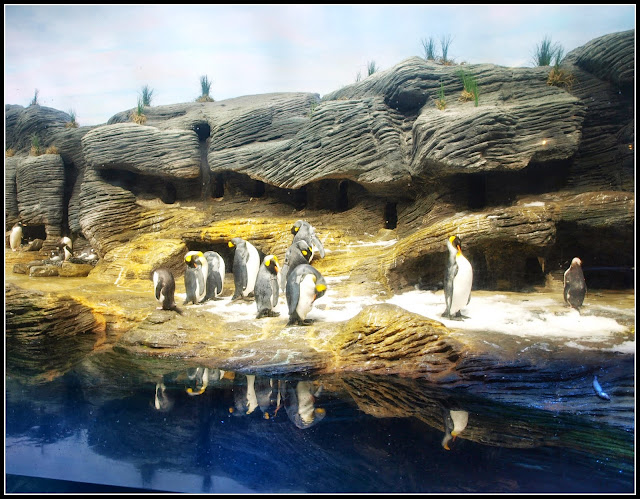 ﻿
There were animals of all sort to see. Big ones, like this Elephant: 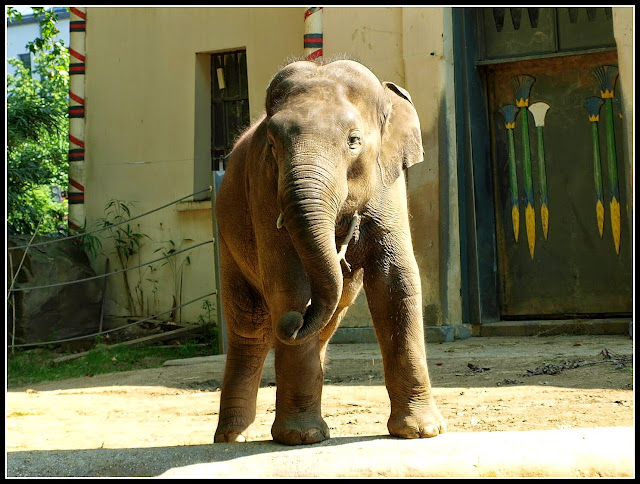 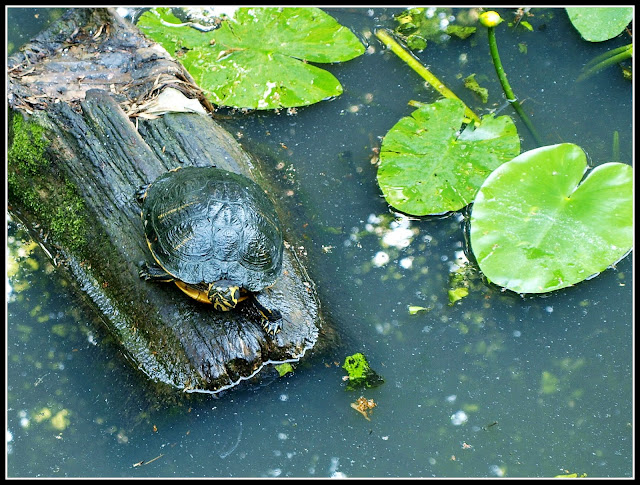 Although the animals were obviously the main attraction, the flowers were also superb. There was one place where they had an indoor rainforest garden, which was full of orchids, such as these: 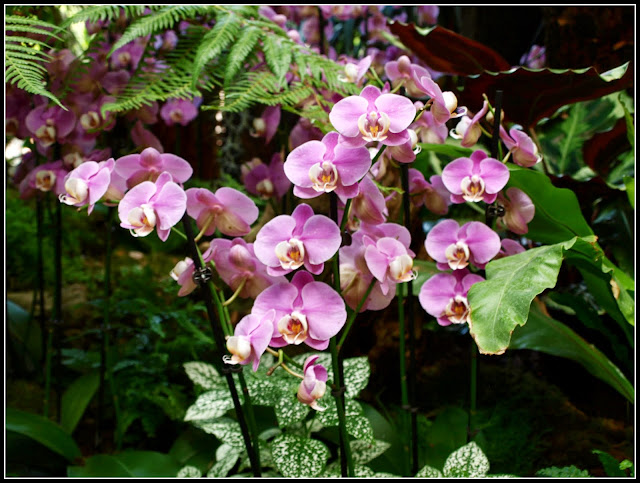 The Hippopotamuses were trying hard to keep cool, so it might have been difficult for someone who has never seen a Hippo before to understand what they look like 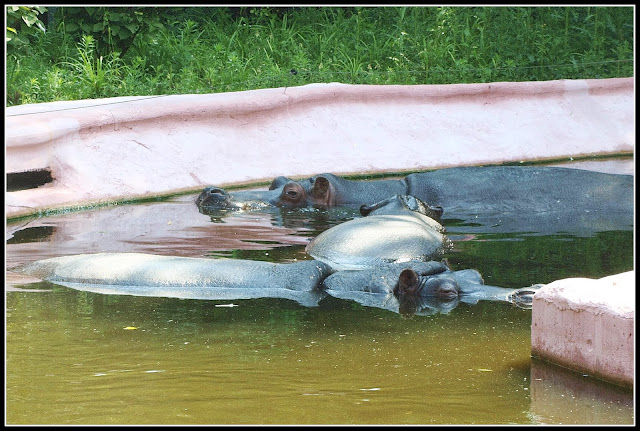 But these charming statues served very well instead! 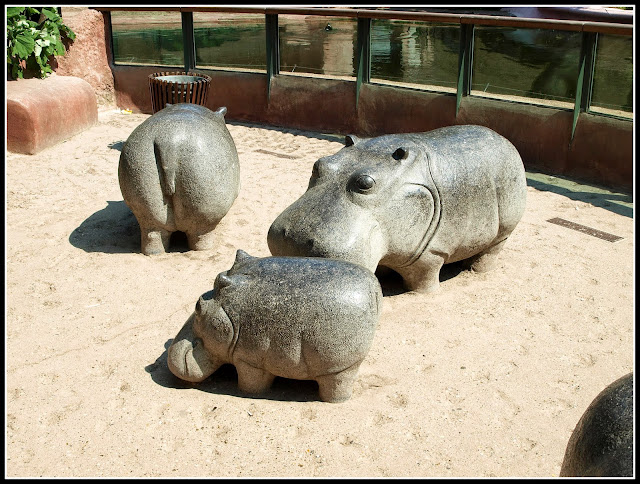 ﻿
At first sight you might think this is a dead Camel - but no, it was just lying in the shade trying to keep cool 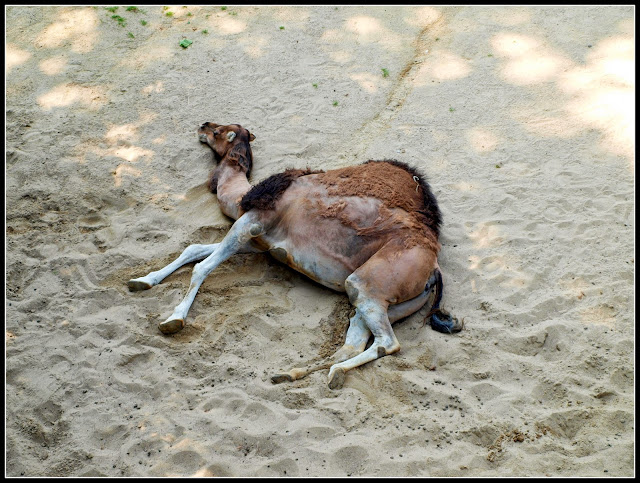 Whereas these two (females, I guess) were having a good old natter... "Say, tell me, what was the Prophet's seventh name? I heard that you know.)﻿ 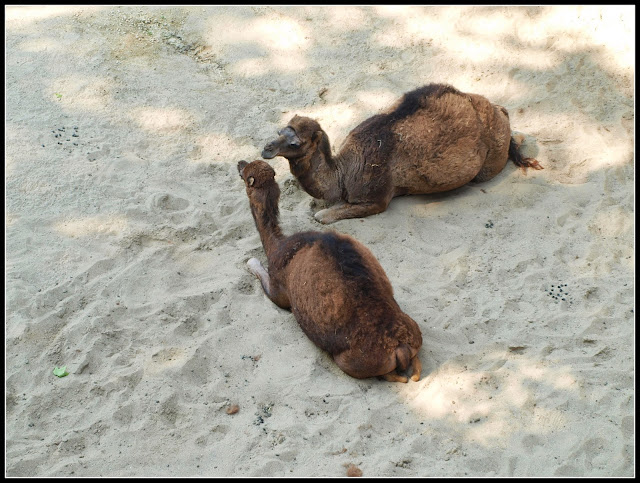 My favourite animals without a doubt are the big cats. The sculptor of this bronze Leopard statue knew his subject well: 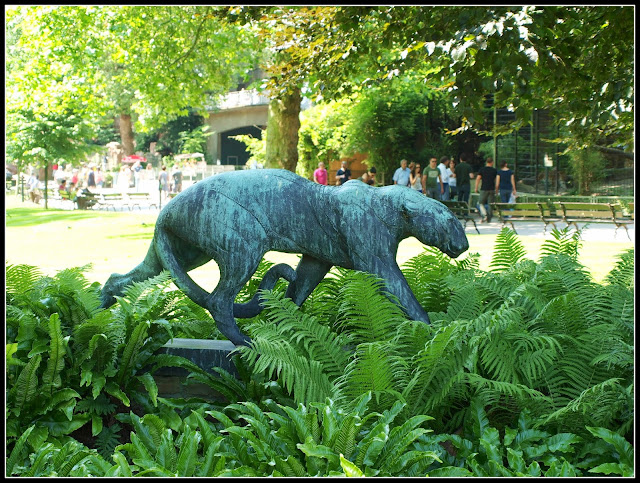 ﻿
However I prefer the real thing: 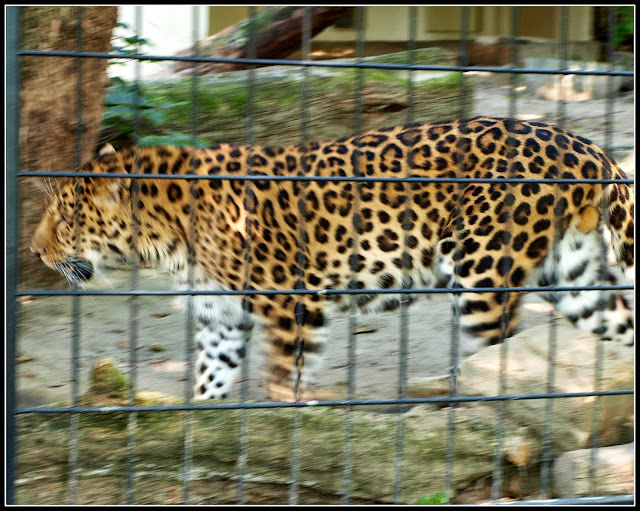 This poor animal was exhibiting the classic symptoms of the caged animal - pacing endlessly up and down in a small circuit - hence the blurry photo, I'm afraid.﻿

The Lions, on the other hand were taking a much more laid-back approach to captivity - lazing on the sand in the shade by the side of the pool (sound familiar?). 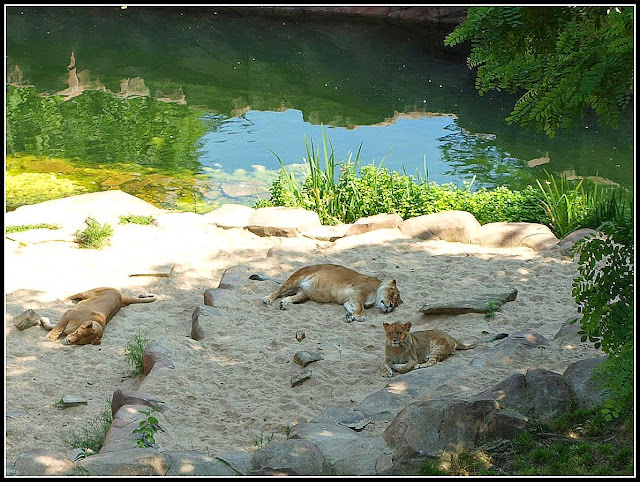 ﻿
Since their food is presumably provided via "waiter service", their life doesn't sound too bad, does it?

Perhaps the nicest aspect of this place was that it wasn't full of booths pushing merchandise at you. There was a gift shop, but it was unobtrusive and easy to avoid if you wanted too. The park was clean, well-maintained and (apart from the odd squawk, roar or trumpet - or shriek of childish excitement) quiet and peaceful. Furthermore there were lots of places for you to sit down, lots of platforms or conveniently-positioned rocks for kids to stand on to get a good view of the animals, and some very nice play equipment for youngsters who had seen enough animals. Overall, we were very impressed with Antwerp Zoo, and would definitely recommend a visit.
Posted by Mark Willis at 16:00