Some of you may perhaps know that I have begun writing a few articles for the website Pushing Up Dandelions, run by Roy and Tanya Walters. If you haven't seen this site, I commend it to you as an energetic and dynamic community of veg-growing enthusiasts.

Roy has arranged for me and some other contributors to receive a selection of free seeds from the London Herb Garden, run by Hannah Flynn. The idea is that we will try out these seeds and review them on the PuD site. Seems to me like a fair deal! So firstly may I say "Thank you" to Roy and to Hannah.

This is what I have received: 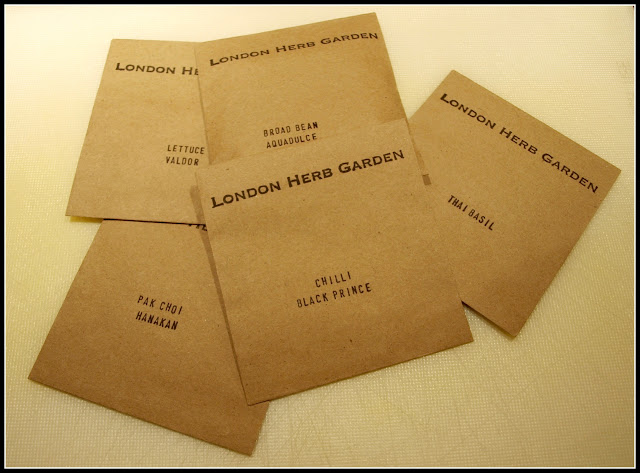 ﻿
It is the Winter Kitchen Garden Seed Pack. Did you notice that the "Black Prince" Chilli seeds are in the most prominent position? I wonder how that happened... The seeds are in very plain "no-frills" packaging, which is fine if you know your veg well, though I think that many people would prefer to have a picture of the veg on the packet, so that they know what they are aiming for. If the aim is to cut costs, then I have to query why the selection of 5 packets was tied up with a bright green ribbon, which to me doesn't contribute anything. I also have to be honest and say that at £8.95 plus £1.75 Delivery Charge, this pack does sound rather pricey. Anyway, let's think about the seeds themselves...

Well, I don't think I will be trying the Pak Choi "Hanakan" seeds, simply because Jane dislikes all Pak Choi so it seems senseless to devote precious space to growing things that won't get used, but the others will definitely be welcome. The "Aquadulce" Broad Beans could probably be sown right now under cloches, but I think I will leave them until February and get them off to an early Spring start. I wrote the other day that I was contemplating dropping peas in favour of more BBs, so the hardy Aquadulce will be ideal, helping me to extend the harvest period of one of our favourite vegetables. The chillis will probably be the first of the seeds to be sown. I will probably get them going some time in January (indoors of course). The lettuce "Valdor" is welcome too, although I can't reasonably sow it in December. The Thai Basil could probably be grown indoors at this time of year, but it would not do well in my house. It would need a lot more light than I could give it, since it would have to be grown indoors on a windowsill. Now, if those seeds had been sown in August / September and the plants were now big enough for harvesting, then that would be a different story!

The London Herb Garden's premier offering is a subscription arrangement whereby for the sum of £36 you receive a packet of seeds every month for 12 months. I'm afraid this is not something that would appeal to me, since I like to sow most of my seeds in a fairly short period of time (say Mar - May). Nor would I want someone else to choose my seeds for me. Surely choosing seeds is one of the major joys of gardening! I think this is a service aimed at a type of gardener that is very different to me. Maybe it would suit the person who likes an occasional "dabble" with herb / veg growing, rather than a fanatic like me.

Anyway, I shall be reporting in due course about how I get on, so watch this space.