Hampshire fare at the Farmers' Market

For about a year now there has been a Hampshire Farmers' Market in Fleet, on the fourth Saturday in the month. This is "A Good Thing" as far as I'm concerned, because in our experience foodstuffs bought from a Farmer's Market are generally better, fresher, and often cheaper than the equivalent things bought elsewhere.

On Saturday, we were there stocking up with a few goodies, despite the atrocious weather. You have to admire the dogged determination of the poor stallholders, standing around in the cold and rain for hours on end. We often buy meat and game at this market, but not this time, since we already have a lot in the freezer. Likewise, free-range eggs are usually on our shopping-list, and sometimes veg from Secretts Farm shop.

I have written on a previous occasion about Loosehanger Cheeses, so other than to say that we bought so many of their lovely cheeses that the proprietor kindly gave us an unsolicited "bulk-buy discount" I won't mention them further. 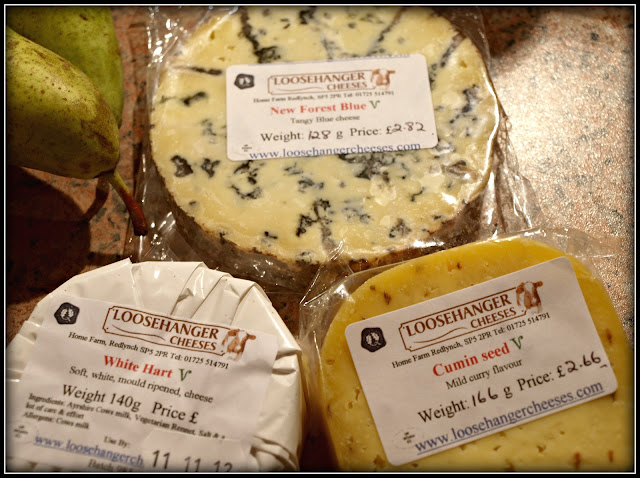 Something else we usually buy is smoked Trout pate, from the New Forest Smokery and Trout Farm, in Fordingbridge. Of course, this is for me the food of nightmares (I don't eat any fish or seafood), but Jane loves it. Of course, the traditional Hampshire accompaniment to this would be fresh watercress, though we didn't see any on sale this time. I'm never really sure when the watercress season is... 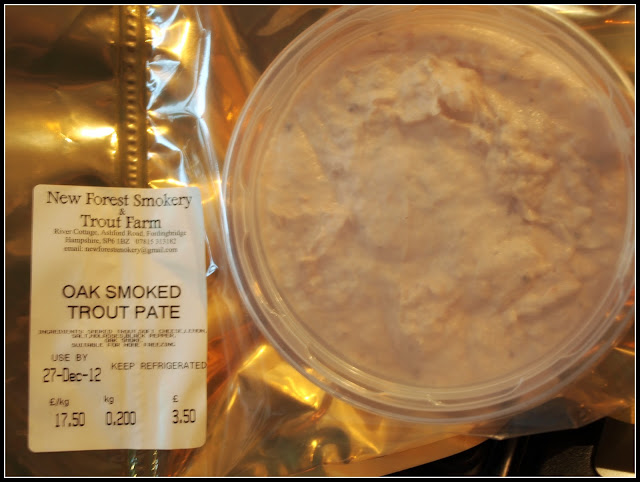 Just to redress the balance (I eat it, Jane doesn't) we bought a Lardy Cake. This is very typically Hampshire fare, and I love it. We have our son-in-law from Panama staying with us for Christmas this time, so we thought he would probably like to try this. It's a sort of fruit loaf - maybe a teacake?- but made with lard, and it has caramelised sugar poured over it to make it sticky and sweet. You either love it or hate it! 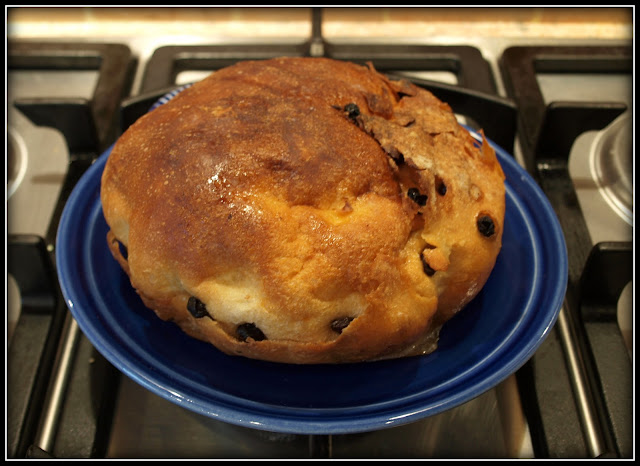 Despite all the above, the things we look forward most to buying at the Farmers' Market these days are the pies. We don't often eat pies, and of course they are not the healthiest of foods, so being able to get really nice ones is a special treat to be savoured just once in a while. There is a stall on the market that sells the most *divine* pies. They come in a variety of flavours: Chicken, Ham and Leek; Sausage and Black Pudding; Steak and Ale etc, etc. Actually the stall also sells Sausage Rolls, Savoury Slices, Quiches and other things like that, but to be honest we never look beyond the pies because they are exactly what we want. And do you know, I can't even remember the name of the producer! Even with extensive research on the internet I can't be sure. Note to self: look more closely next time. 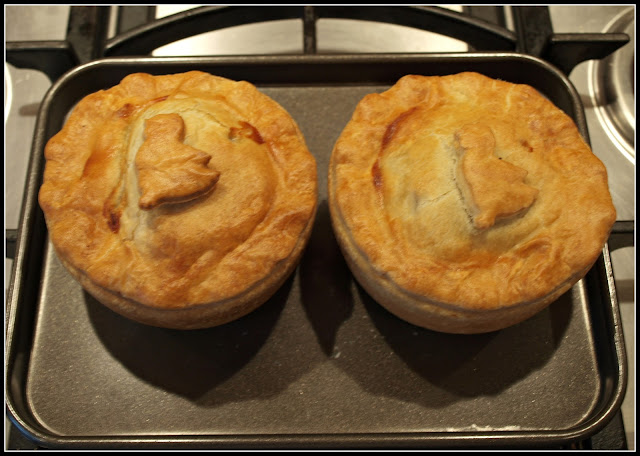 Our favourite pie is the Steak and Ale one. It is in my opinion perfect. The pastry is light, crispy and golden; the meat is succulent and tender; and the pies have plenty of gravy in them. The ale content furthermore is noticeable but not overpowering. But we also like the Chicken, Ham and Leek variant (pictured above). If you're buying a mixture of types you can tell which one is which by the little pastry emblem on the top - ours are chickens you'll see. 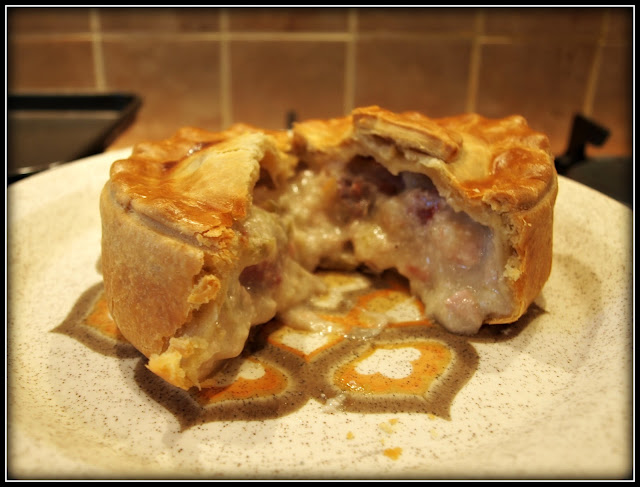 ﻿
These are the type of thing we like eating: good, wholesome fare, not mucked-about-with, and all the more special because they are locally produced.
Posted by Mark Willis at 16:00