I wrote yesterday about the Jamaican Patties I made as the starter for our Caribbean meal. Today I am going to describe the main dish - a "Caribbean-inspired" roast pork dish. 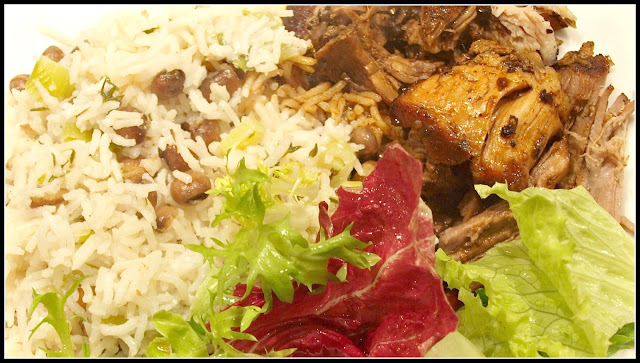 This is a recipe I have concocted myself, so it was a bit of a gamble. What I wanted to achieve was a piece of pork that was so soft and tender that it would almost fall apart, but which would also be full of zingy flavours. Actually the cooking method is not really roasting - it's more like braising, but we'll get to that in a minute...  Just as a reminder, I'm posting again a photo I used yesterday, because it shows off the spices and flavourings I used. The main flavours in my dish were Thyme, Fennel and Allspice - which to me epitomise the taste of the Caribbean. 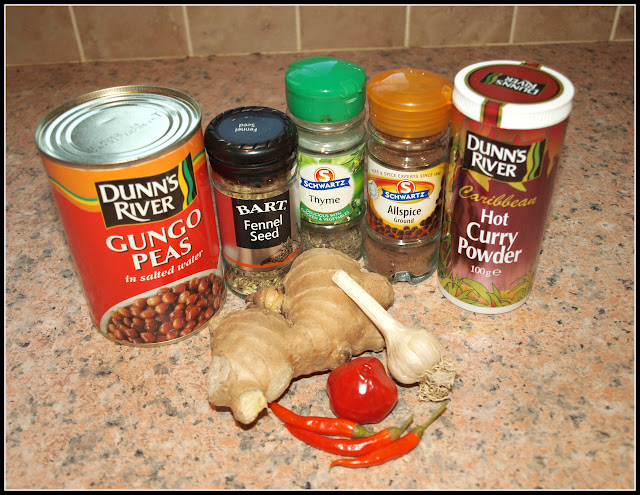 Notice the Scotch bonnet chilli pepper sitting there in the front. These things have fierce heat, so I played safe and only used half of one in my dish. (It was home-grown, of course, as were the other chillis).

My pork was a piece of Shoulder, bought from the butcher rolled and tied, but I unrolled it so that I could get more of the meat in contact with a marinade. I made my marinade with crushed Allspice berries and Fennel seeds, some dried Thyme, some peeled and grated fresh ginger, some garlic and some black pepper, all moistened with a little vegetable oil so that it would stick to the meat. I also added a couple of teaspoonfuls of Dunn's River All Purpose Seasoning. This seems to appear in most meat recipes originating in Jamaica, so I reckoned it would be very appropriate for what I had in mind. The meat was liberally coated in the marinade and then left to stand (covered with clingfilm) in the fridge for about 6 hours.


An hour or so before cooking time, I took the meat out of the fridge to allow it to come up to room temperature. I then browned it in some hot oil in a frying pan and stood it on a temporary trivet made of thickly-sliced onions in the base of a big roasting pan. To the pan I added ginger, garlic and chilli, cut into quite large chunks, followed by a splash of soy sauce and finally about 500ml of stock. I wanted my dish to braise in the steam from the evaporating stock, rather than roasting in oil, so I covered the whole pan with a canopy of aluminium foil. Into the oven it went, at about 160C, for three hours. After each hour had elapsed I briefly removed the foil and added a bit more stock. After three hours it looked like this: 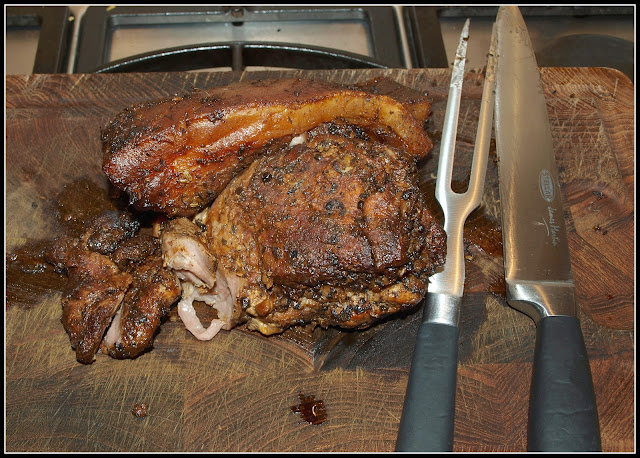 I was pleased. The texture was just what I had hoped for. The carving-knife pictured above proved completely redundant. The meat was so soft that it was impossible to carve; you just had to pull it apart with a fork. And the flavour? Well, strong and spicy, but not overpowering. I was glad about that too, because I don't have much experience of working will Allspice, and I had had to guess at the quantities. BTW, I kept the cooking juices and passed them through a sieve to make a gravy. Now that WAS powerful!

To accompany the meat I made Rice and Peas, another very Caribbean dish. As most of you will know, the "peas" in this dish are not usually peas at all, but beans - typically black beans or Red Kidney beans. I used Gungo Peas, aka Pigeon Peas, which are quite authentic since they are widely encountered throughout the Caribbean area. The Rice and Peas dish is cooked in the same way you would cook "ordinary" rice, simply with the addition of the peas/beans, some chopped Spring Onions, and about a teaspoonful of fresh Thyme leaves. For extra flavour I replaced some of the water I would normally have used with a small tin of coconut milk. 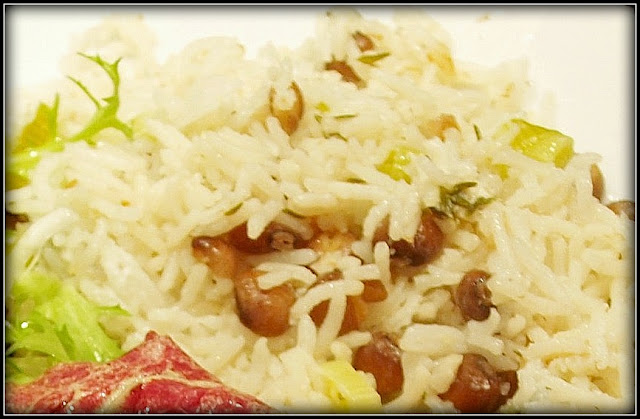 For a bit of colour on the finished dish, I served my pork and rice with some Endive-and-Radicchio salad... 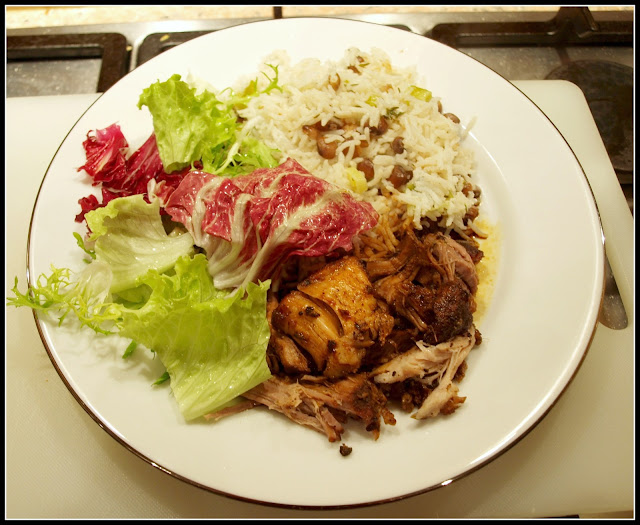 ﻿Well, being invented by me it may not have been authentic, but Jane and I both loved it, and that's really what matters isn't it? To me there's little point in cooking food you don't enjoy.
Posted by Mark Willis at 16:00