The other day one of my friends from UK Veg Gardeners, Stephen Shirley, sent me a really nice Christmas present - a couple of dried Garnet chillis, a bottle of his own homemade "volcanically-hot" chilli sauce, and some packets of chilli seeds. I wonder how he guessed that I'm fond of chillis??? Thanks, Stephen.﻿

﻿
This whole Spanish-style casserole thing started from the realisation that we had in the freezer some Chorizo sausage left over from a previous occasion. Thinking it through, it was obvious that some Pimenton (paprika powder) would also be required for the dish I had in mind, so Stephen's dried chillis sounded ideal for this - especially since one of them had been smoked. After removing the seeds from this huge chilli, I used our spice-grinder (originally built as a coffee-grinder) to grind it into a fine powder. Behold: Pimenton! 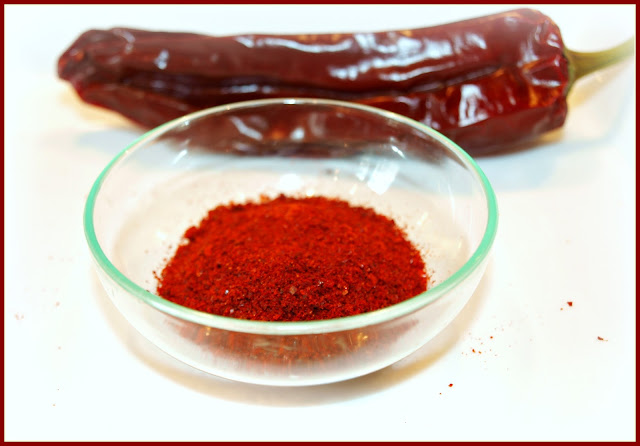 ﻿
These are the ingredients for the casserole: diced pork, chorizo, onion, garlic, chillis, tomato sauce - and of course the paprika. Not illustrated: salt, pepper and dried oregano. I suppose a Spanish person would have put red peppers in instead of chillis, but that's just too bad because I don't like them! 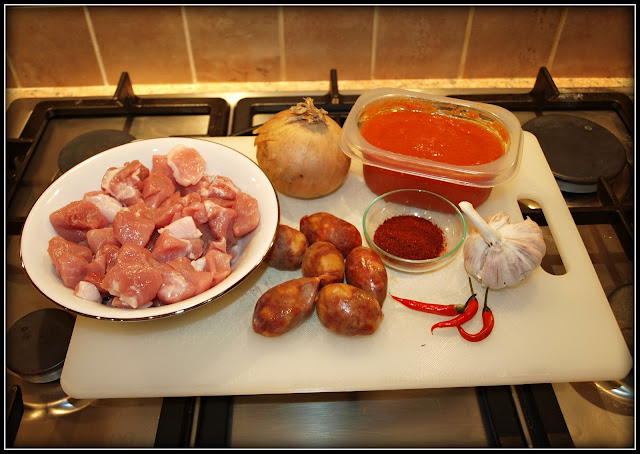 I browned the pork and the chorizo in a frying-pan, and added the paprika at this stage so that the meat would be nicely coated in it. 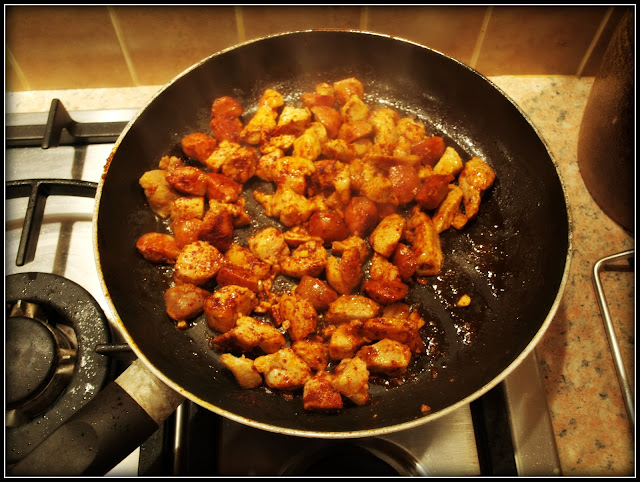 I decanted the browned  meat into a deep casserole dish in which I had previously softened the sliced onion. I also added the tomato sauce, the diced garlic and the seasonings. Then I added about 500ml of stock before putting the dish (covered) into the oven at about 150C for two and a half hours. 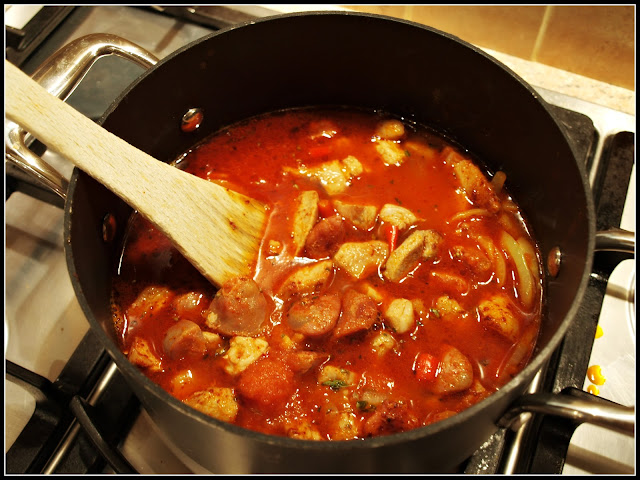 To accompany the pork I served home-grown Cavolo Nero, quickly fried in some oil with a bit of thinly-sliced garlic. 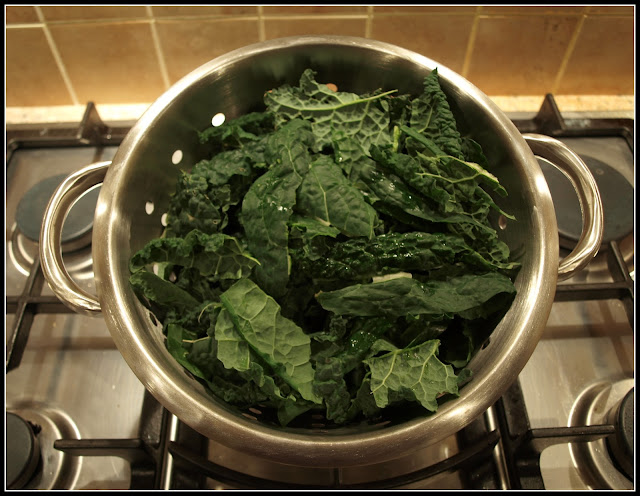 And for the starch, a risotto with a few peas added for extra colour. 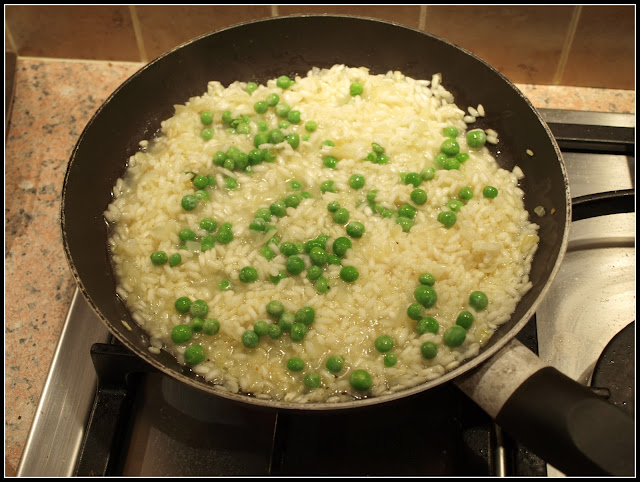 So here is the finished meal, all assembled. 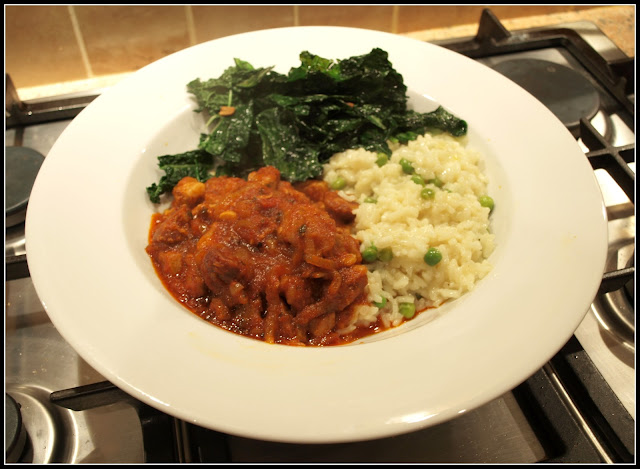 After its long cooking, the pork had gone tender and succulent, but the star of the show was the freshly made paprika. It was really nice! It had a rich, sweetly smoky flavour which both Jane and myself loved. I think next year I will be growing some peppers like the ones Stephen gave me. In the past my dislike of the Capsicum / Red Pepper has prejudiced me against the Sweet Pepper types and I have concentrated solely on the chillis. I won't be giving up the chillis though - my pork casserole just wouldn't have been the same without the little "afterburn" imparted by those Turkey chillis I put in. 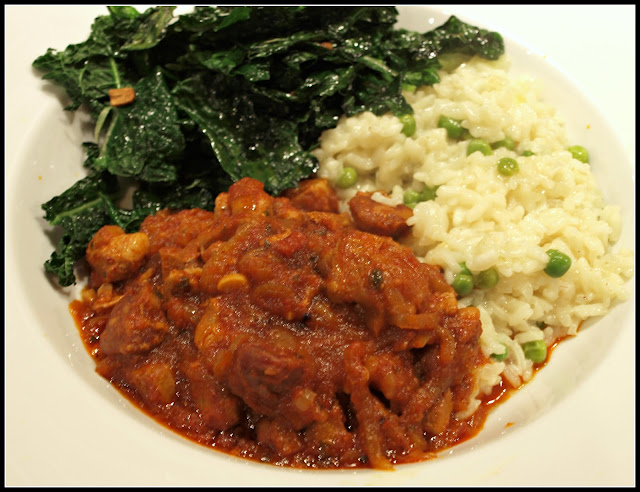 For those of you interested in such things, Stephen has on his website this very informative Heat Guide for chillis and Sweet Peppers. I think I have just entered a new era in my gardening life!
Posted by Mark Willis at 16:00