Do you remember me mentioning Woodblocx the other day? And maybe you saw this company featured in "The Dragons' Den" on BBC Two a couple of weeks ago? Proprietor Henry Blake very kindly offered me one of their Raised Bed kits to review. Here goes...

Right from the first, I was impressed with Woodblocx's speed and accuracy of communication - which is a virtue regrettably rare these days. I was kept fully informed of the kit's despatch status all along - even to the extent that the delivery driver phoned me an hour or so before arriving at my house, just to ensure that I was in and ready to receive the goods. The kit arrived on a pallet (Great! That means I'll have some spare wood for all those little repair jobs that need doing in the garden...). Fortunately we had space to store it in the garage, but this is something you would have to consider if you don't have a garage. 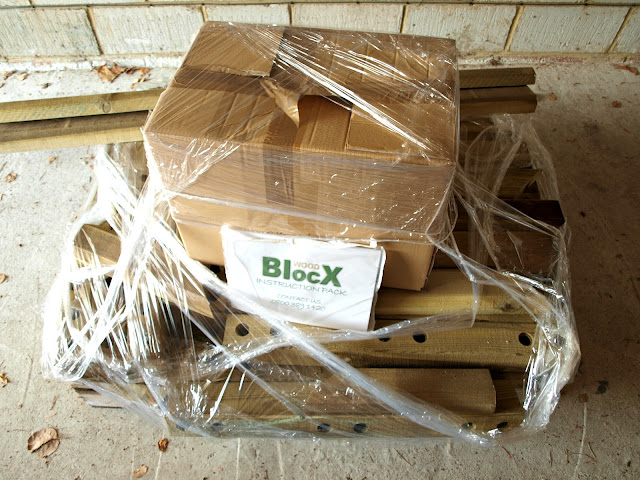 I was a bit concerned by the state of the packaging, which was a bit higgledy-piggledy, with a couple of completely loose bits, and it looked as if some parts could easily have been lost in transit. However, I checked everything against the Picking List and it was all there. In fact I had two spare pieces. I'm not sure whether that was deliberate or not. The kit came with a very comprehensive, easy-to-follow set of instructions (and there is a load more info on the Woodblocx website if you need it - including videos). They even provide a pair of gloves with every order, so that you don't get splinters while handling the wood. 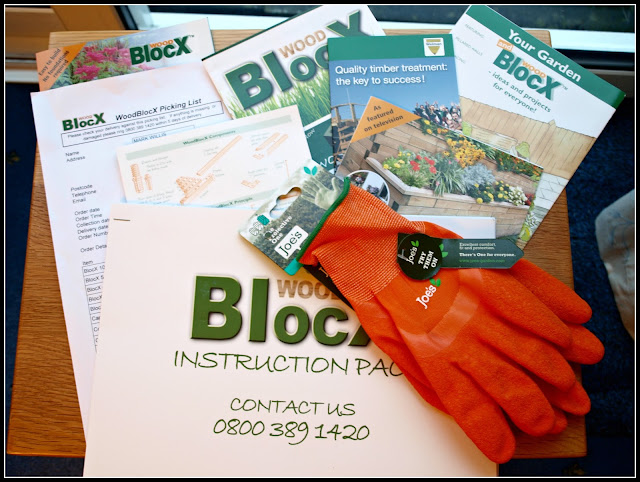 I wasn't able to make the kit immediately, because of work committments and the weather, but the delay did give me the opportunity to arrange for a bit of assistance from some other family members - my daughter Emma and granddaughter Lara, both keen gardeners. Before their arrival I prepared the site. Henry had advised me that this part of the procedure was very important. If you don't level the site properly the bed will not sit right and may be unstable. 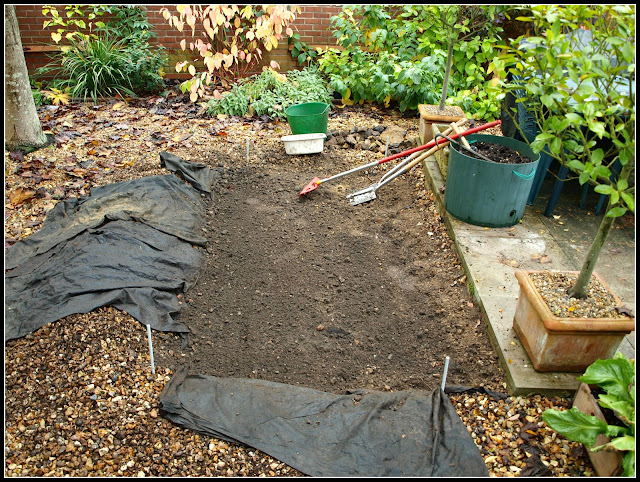 I had rather optimistically presumed that it would be simply a matter of scraping back the shingle and raking over some earth underneath, but this was far from the truth. Ideally, a thick layer of sand would make life a whole lot easier, but... Underneath the shingle was a substantial layer of hard-core which needed shifting (I should have remembered this, because I had arranged for it to be laid a few years ago when the lawn was removed!). It turned out to be a couple of hours' hard work, but I expect it will be worth it in the end - and I now have a plentiful supply of rubble to use as "crocks" for putting in my plant-pots to provide drainage.

When Emma arrived with the children, Lara and I had a trial run, using Lara's Mega Bloks to make a rather fanciful "artist's impression" of the bed we were about to build... The principles are very similar you know! 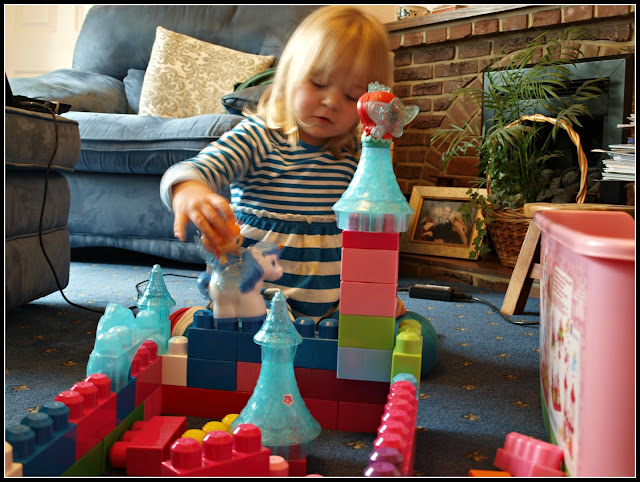 Holly, now 6 months old, did her best to contribute to the proceedings: 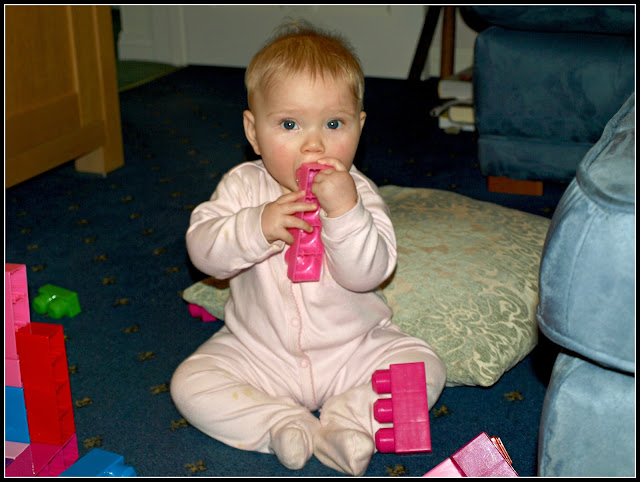 Anyway, we were soon out in the garden and getting ready to start work. Lara helped me to make sense of the instruction manual: 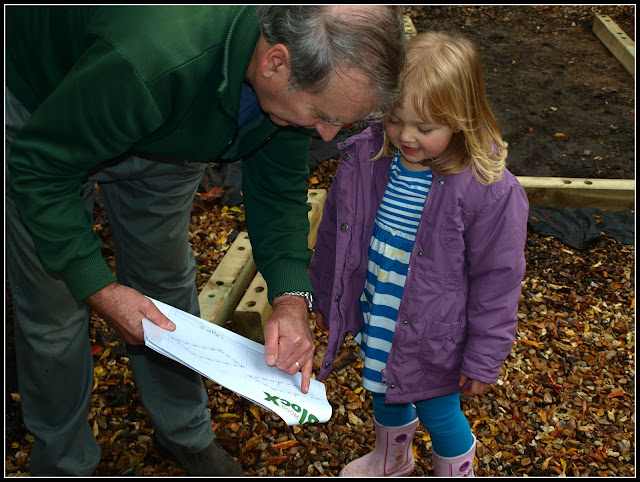 We laid out the blocks in the correct format for Level 1 - easy to do with such clear plans, and since the blocks are only of two sizes. It's just like Morse Code you know: Long, Short, Long, Long, Short, etc...! 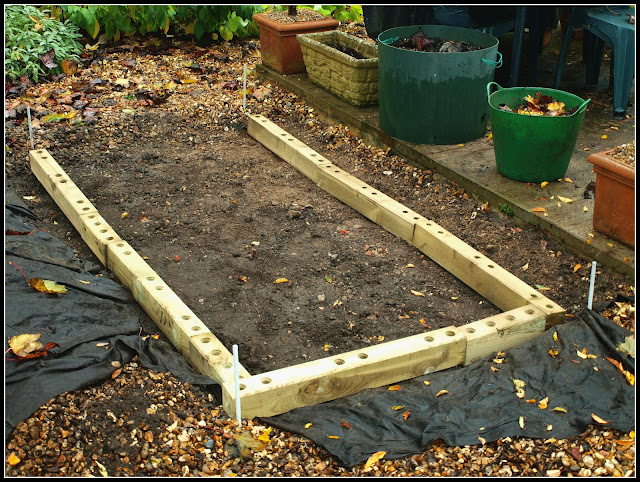 Then Lara and I banged in the plastic dowels which hold the blocks together. 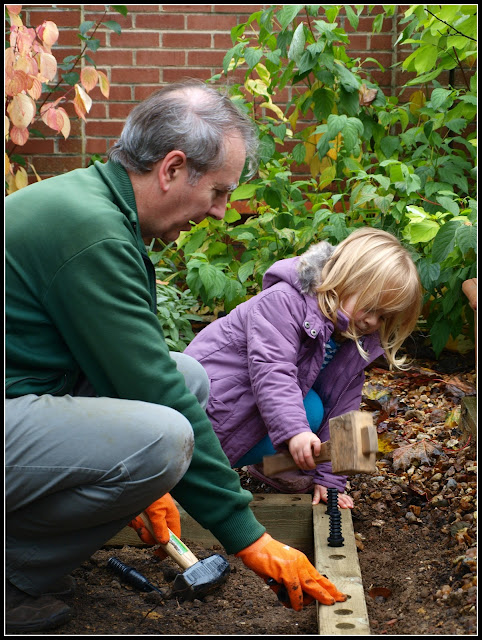 Notice I'm wearing those tasteful Joe's gloves! It was at this stage that I made a big mistake. We were having so much fun banging plastic dowels into wooden blocks that we accidentally put dowels in EVERY hole in the first level of blocks, which is definitely not required. Having realised my error, I had to set-to and remove the superfluous dowels, which was much easier said than done. After this I understood more fully the role of the wedges that lock the dowels in place, and from that point onwards I decided to omit the wedges. I think the structure will be rigid enough anyway, and the absence of the locking wedges will make it easier to  disassemble if I ever decide I don't want it any longer.

Another piece of equipment that you will need if you want your raised bed to sit right and look neat is a spirit level: 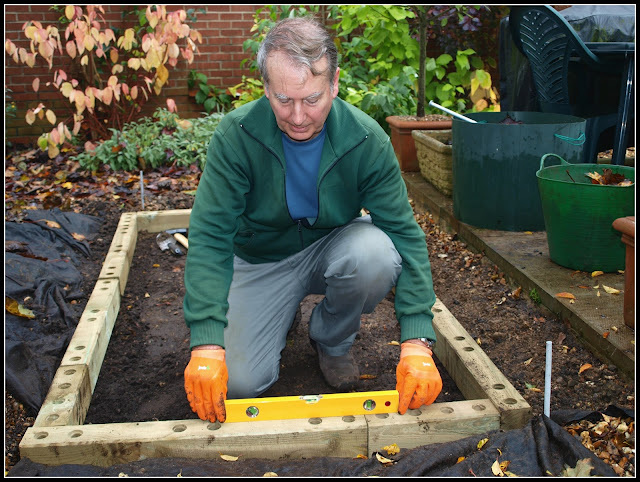 Once I was happy with Level 1, we moved on to Level 2, tapping the blocks onto the dowels protruding from the level below, in such a way that the joins were staggered (following the plan very carefully now!). It's very similar to the principles of bricklaying. 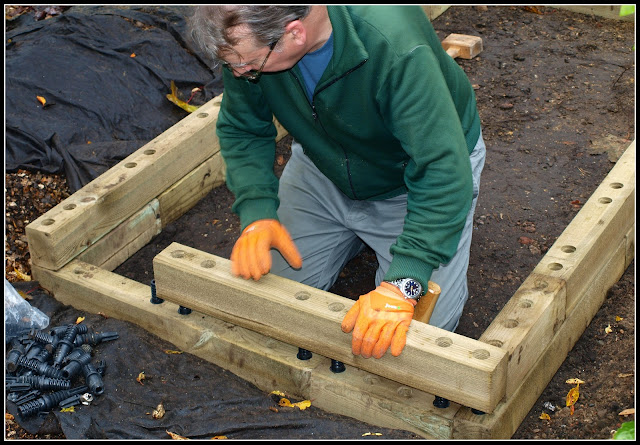 Once we had got the hang of the construction method, progress was swift. As well as wielding the camera at appropriate moments, Emma read the plans and called out to me where I should put the next piece. We soon had all four Levels in place, and just the ornamental capping left to do. 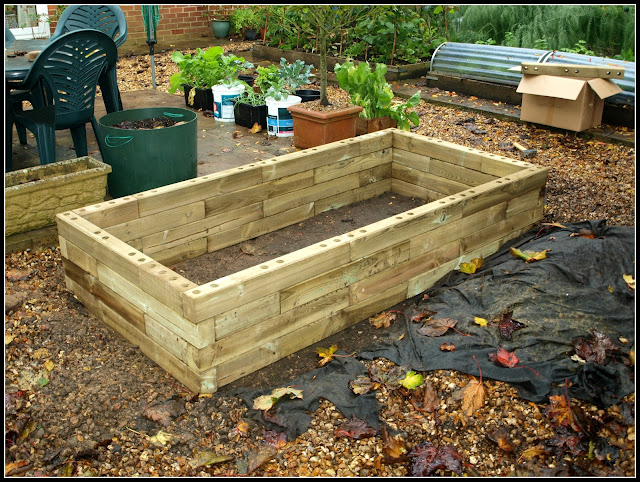 At this stage Emma and her girls had to leave, so I decided to call it a day and finish the job at the weekend.

So, on Saturday afternoon I spent about an hour or so adding the final layer - the ornamental capping. The capping is much shallower than the blocks themselves, so it is necessary to use a saw to shorten the dowels that fix it to the blocks. Since there were 40 of these things to do this was a significant task, and I must say that I am very surprised that the manufacturers don't supply dowels that are already the right size. "Tapping" the capping into place is a task that is definitely made easier by the use of a heavy hammer or mallet (I used a 4lb club hammer); an ordinary DIY-type hammer really wouldn't be sufficient.

I was a bit worried that the capping would be hard to fit, since the angled corner pieces have to fit together snugly in order to look nice. The manufacturer recommends using a T-square to make the corners exactly right-angles. I don't have a T-square, so I had to do things by eye, but I needn't have worried - it all came out OK. 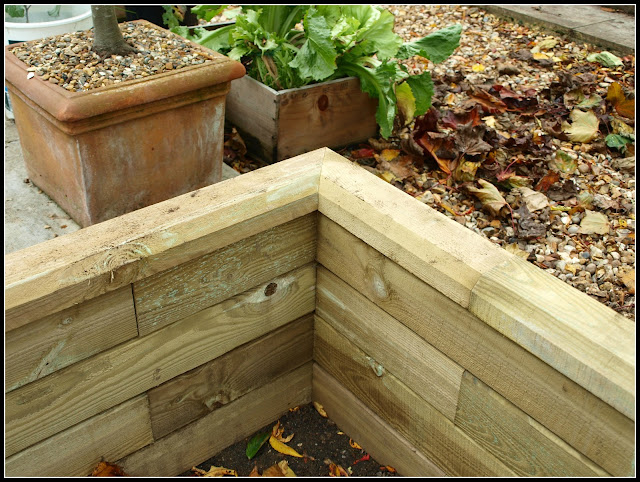 I have another little criticism to raise: the instruction leaflet was not easy to use. It kept blowing about in the wind, and getting damp in the drizzle, so it was a bit dog-eared before I had finished with it. This was exacerbated by the fact that I had to keep turning the pages to and fro, because they are not in a logical sequence. For instance the fitting of the capping is covered before the building of the final layer of blocks. I felt that the leaflet really ought to have been laminated to make it waterproof. You really do need to keep consulting it because the positioning of the dowels in the right holes is vital (see above!).

Anyway, it's all done now, and it looks very smart: 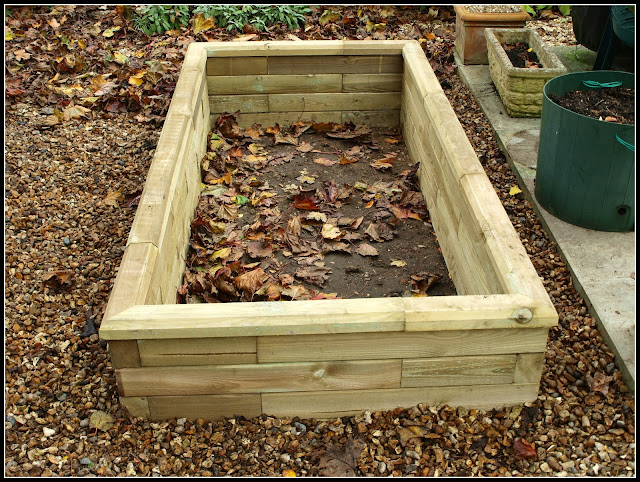 Now I just need a ton of compost to fill it with!  My plan is to fill it with home-made compost from my two plastic "dalek" bins, and anything else I can accumulate over the Winter, and then if it still needs more I'll top it up with commercial compost in the Spring. What a shame that I'll have to wait so long before planting anything in it, because I'm just itching to bring it into use. It is about twice the depth of my existing raised beds so it ought to produce some excellent veggies! 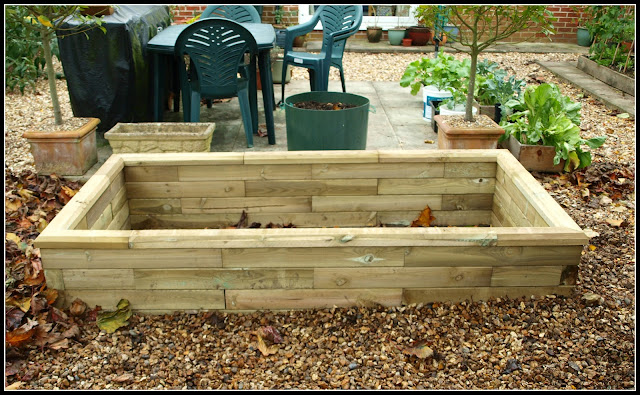 Many thanks to Woodblocx for providing this very fine piece of gardening equipment. It has certainly lived up to my expectations and I expect it will do sterling service for many years to come. The kit supplied was for a bed measuring 2250 x 1150 x 450mm. It retails at £225.95 + £35 delivery charge. Full details can be seen on the Woodblocx website HERE.

P.S. (for Henry:) Who needs sleepers??? They are nowhere near as versatile - and they are probably treated with creosote or something equally harmful to veggies.
Posted by Mark Willis at 16:00