This post is really an opportunity to show you some aspects of my garden that don't warrant a dedicated post of their own...

First up - the Aquilegia. I have a few of these next to one of my compost bins, and growing down the side of my house where there is only a narrow path between us and the neighbours' fence - in other words some of the least desirable parts of the garden. This is only fair, since the Aquilegias moved in uninvited, so must make do with the space that no-one else wants... 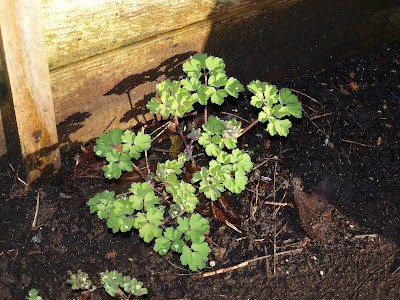 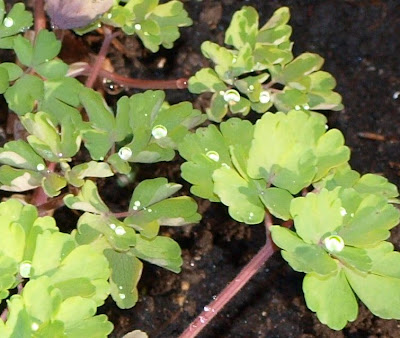 No flowers yet of course, but later in the year these plants will produce masses of pink and dark blue flowers. Notice how the leaves are water-repellent - the raindrops sit in the dished leaves like little silver ball-bearings!

Next the Crocus. At this time of year everyone is writing about Crocuses, and they are so well-known that no-one needs to be told about them, so they often get overlooked. These ones of mine were being a bit shy, staying firmly closed. Later in the day, when the sun had warmed up a bit I'm sure they opened out fully. 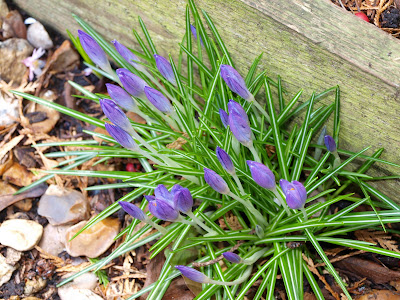 These ones, although more delicate in colour, were somewhat more forthcoming... 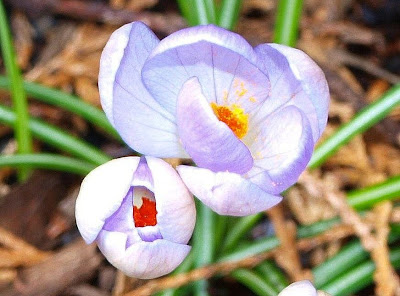 ﻿
This next photo shows one of the least desirable effects of making your own compost. There is a carpet of tiny green seedlings on the surface of most of my raised beds (where I distributed the compost from the old cucumber bin that I dismantled at Christmas time). 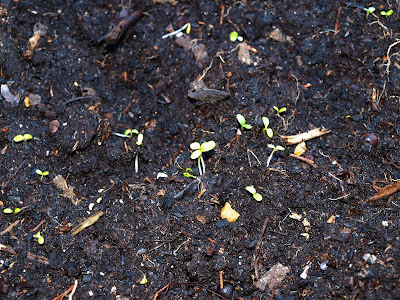 I'll be able to hoe them off fairly easily, but I'll wait for a dry day. Hoeing weeds in wet conditions may just re-plant them without killing them.

Talking of compost - I MUST show you this photo (close your eyes at this point if you're squeamish). I was turning the contents of one of my compost bins to help with the decomposition process. The number of worms in the bin was absolutely amazing! 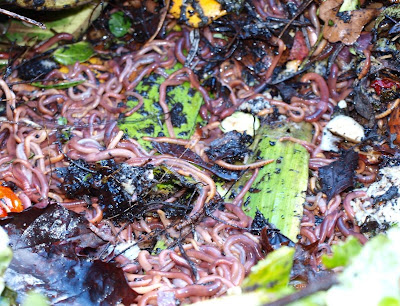 I'm not worried by this sort of worm - I see them as useful allies. I sometimes think about how many trips to the Council recycling point must have been avoided over the years by the presence of these voracious little waste-processing creatures. [My friendly Robin also likes them - for a different reason.]

The Good King Henry plants are coming up strongly now. This plant is another prolific self-seeder, so it tends to crop up all over the place. I have not been impressed with its performance as a salad ingredient (I find it tasteless, and all but the tiniest leaves are tough). I suppose I could cook it like spinach, but I've never yet felt inspired to do so. However, despite all this criticism, you have to admit that it looks pretty in the sunshine. 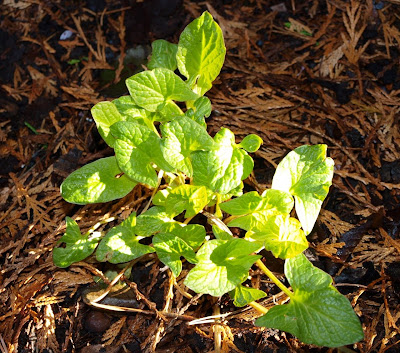 The Prunus Autumnalis "Surbhitella" has a lot of blossom at present - which is a bit surprising, as it is supposed to be Autumn-flowering. Over the years I have had it (probably about 18) its flowering season has gradually got later and later. 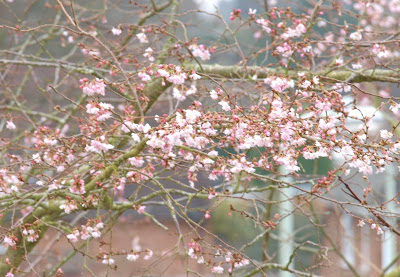 Last week I ordered some of those "Longrow" plastic cloches, which I hope will help me to protect seeds and young plants from weather and foxes, and will allow me to get plants started a bit earlier in the season than would otherwise be the case. As the name suggests, these cloches are long and thin - 1.2 metres by 0.45 metres. I sowed my first seeds of the year (chillis) on Valentine's Day, indoors in propagators, and I have noticed that my rhubarb is just appearing above the surface of the soil, so things are beginning to happen, and within a month or so I will have a lot more to write about.
Posted by Mark Willis at 17:30