Gardening is in my blood

Many of you will know that I am very keen to pass on my love of gardening to my children, and now my grand-daughter Lara. This happened in my Father's generation too of course. My Dad retired quite early (55) after spending most of his working life living in Malaya, where he met my Mum, and where eventually I was born. My Dad's retirement hobby was gardening, and he rapidly became proficient at it, and grew lots of lovely vegetables, notably potatoes, runner beans and tomatoes. I'm sure that my own love of vegetable gardening was initially inspired by his achievements. Regrettably my Mum died very young and I knew far too little of her past. Here is a picture of her on the front steps of our house.﻿
﻿
﻿

Just recently I acquired a brilliant device called "Slides2PC" which allows you to convert old 35mm transparencies (slides) into digital files, such a Jpegs. This has opened a new window onto my past, because I have been able to view easily all the slides that I inherited from my Dad, which probably had not seen the light of day for the past 20 years at least, since we do not have a slide-projector. Most of these slides are at least 50 years old, many of them much older, so the quality (particularly in respect of the colour) is not so special, but considering their age I think they are quite good still. I have been able to adjust some of them with photo-editing software, though they don't all respond to this.
The slides show many fascinating insights into my early years, and into life in Malaya in the 1950s and 60s, but for me the most significant thing they demonstrate is that my Mum was also a keen gardener!
Here is the house in which we lived, in Ipoh, Perak, Malaysia. It was right next to the race-course.


Note the massive garden - I think it was about 2 acres in total.

Here is the office in which my Dad worked - The Perak River Hydro-Electric Power Co. Ltd. He was the Chief Accountant of the firm.

Here is a view of a prominent Ipoh landmark - the railway station.


Here is the "padang", which serves as parade-ground, sports field etc.

Here is the Court House.


Here is the archway erected to celebrate Merdeka, or Independence, from Britain in August 1957.
.

Here is a view of the Swimming Club, scene of many happy memories.


I know that some of my readers live in Malaysia, so I wonder if anyone can tell me what those places in Ipoh look like now.

But now what I'm most interested in, evidence of my Mum's love of plants (flowers in this case). In the collection of slides there are lots of pictures of flowers and flowering trees, mostly taken in our own garden.


﻿ ﻿
﻿ ﻿
﻿﻿
﻿﻿
Here's a picture of our lovely cat Fluffy - obviously a fan of the flowers too (though I suspect she had just been drinking water from that very impressive cut-glass vase...)


And finally, here's a photo of Yours Truly, aged about 7, on his first bike (shared with brother Paul). 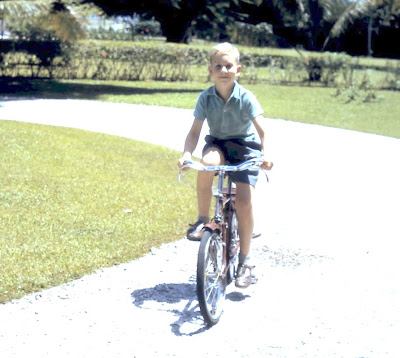 So, the photos are rather faded, but the memories they evoke for me are nonetheless vivid...
Posted by Mark Willis at 17:30