I saw another new type of bird in the garden recently (last Thursday to be precise) - a Redwing. I say "new", but of course I mean only "new to me". I have never consciously seen a Redwing in my garden before, but I do have to say it would be easy to mistake it for a Song Thrush, and it is indeed a member of the same family.

I tried to get a photo, but failed, so here is one I have found on the Naturfoto website. 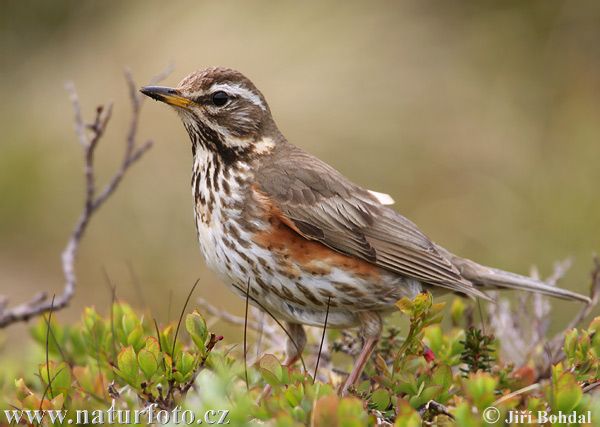 This photo is used under the terms of the copyright of Naturfoto-cz. Photo by Jiri Bohdal. (What a fantastic photo, eh? All the photos on their site are of this sort of quality - go have a look!)

I became aware of this bird's presence by observing some very aggressive behaviour on the part of the local Blackbirds, which were shouting loudly and doing a lot of flapping about, evidently aimed at letting the newcomer know he was not welcome. At first I thought the bird they were mobbing was a Thrush, but when I looked more closely I saw the distinctive light-coloured flashes above the eye, and the very obvious red patches on the flanks. No doubt about it - it was a Redwing

Consulting the RSPB's website, I was initially excited to see that the number of breeding pairs of the Redwing in the UK is listed as a mere 2 -17! Reading on, I see though that about 685,000 of them over-winter in the UK. So it's not rare really, it's just that I've never spotted one here before. As it happens, the day I'm writing this (Sunday) is one of the days of the RSPB's Big Garden Birdwatch scheme, on which they ask people to record how many individuals of various types of bird they see in their gardens, so that they can attempt an estimate of the populations. One of the varieties they are particularly looking out for is the Redwing, which normally lives out in the countryside, but this Winter it has been seen a lot more in urban areas. This is presumably because food is harder to find because of the severe weather. I't's a shame the Redwing didn't visit me at the weekend, because then I could have reported it...

I just HAD to put one of my own photos into this post, so here's one that's vaguely related to the current theme. It was taken on Sunday morning, and shows the evidence of a commodity that has recently been in short supply in my garden - sunshine!

By the way, I haven't seen anything of the Blackcaps since just after Christmas. They were probably just "on vacation", stocking up on some high-energy sunflower kernels before moving on elsewhere. Talking of which, our 15kg sack of bird seed is about half-finished now. Most days I put out about 200g or so, and the birds just love it.
Posted by Mark Willis at 17:30