A Hampshire day out

Last weekend we spent a night in an hotel down near Fareham, in the southern part of our county, Hampshire - very close to Portsmouth, which most of your will have heard of... This was supposed to be a special occasion, to celebrate 35 years since we became engaged. However, the hotel in which we stayed left a LOT to be desired, so the less said about that, the better.

We paid a token visit to the seafront, overlooking the Solent (the narrow stretch of water separating the Isle of Wight from the mainland). The sea was very calm, but also very grey... 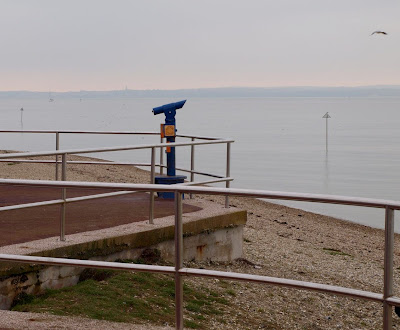 Not really beach weather... But then what do you expect in February?

Since the evening meal in our hotel was a big disappointment, we felt in need of some serious Food Therapy, so called in on the way home at a little Hampshire village called New Alresford. Actually, it is only "new" in relative terms. In the year 1086, when the famous Domesday Book was put together for King William The Conqueror, this village was inaccurately recorded by the clerk. It was supposed to be "Arlesford" - since it was a place where you could ford the river Arle - but the clerk recorded it as "Alresford" by mistake, and it's been called that ever since.

It is still the archetypical "Sleepy Hollow" - delightfully quaint and old-fashioned. It has a number of suitably old-fashioned shops in which you can still buy real food. We bought (amongst other things), some really traditional Hampshire foodstuffs - watercress and Lardy cake. Most of you will know the first of these:

﻿
﻿
Lardy cake is probably less well known! It is a type of sweet bread, made with lard. It is eaten as a "tea bread", like you would eat a cake. Faintly akin to a doughnut, I suppose. It is delicious. 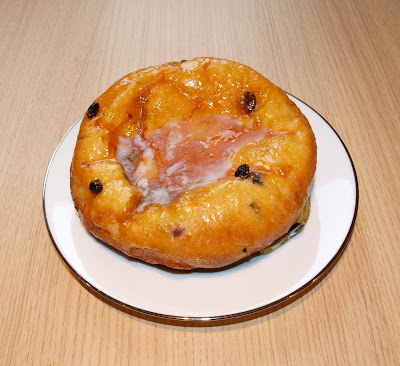 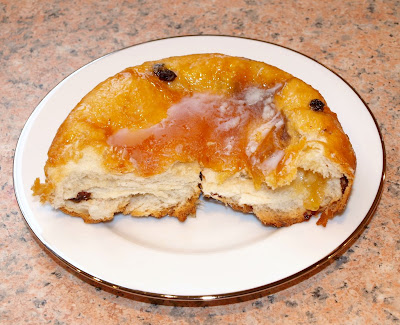 ﻿
We also bought some nice cheese, including some Fourme D'Ambert - hardly Hampshire cheese, you wiil say -  but perfect for the dish we were planning, which is home-grown salad with chunks of pear, all in a blue-cheese dressing.
As you can see, I picked the first of my Red Chicories. It was a bit on the small side and would have grown bigger if I had let it, but I felt we needed something special to compensate for the disappointing hotel meal, and I think you will agree that it gets full marks for visual appeal.
I made some Soda bread for with the salad, which we ate with lots of nice salty butter... It's incredibly easy to make, and ready in 45 minutes from a standing start! 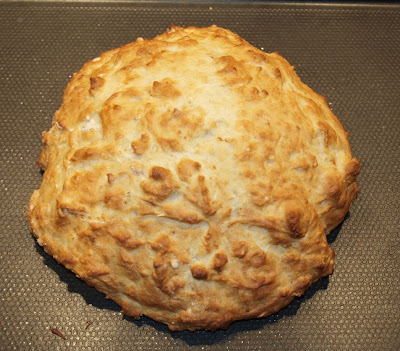 We also bought lots of more mundane things, which I won't bore you with, but I will make an exception in favour of the beetroot. The fresh roots were in a pan of water, boiling, within about half an hour of us getting home. Both Jane and I find the earthy smell of freshly-boiled beetroot irresistible. Here's a picture of it fresh from the pan, with the steam still rising from it. If only there were such a thing as "Smellyvision", so that you could share the lovely aroma with me... 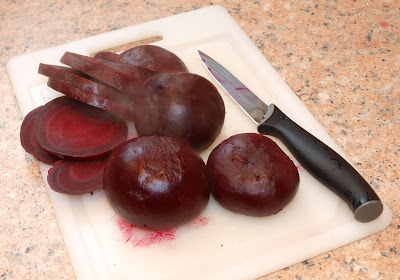 Oh, and finally, one other good thing came of this little outing: we decided to recognise the occasion by buying ourselves a little treat. Jane chose a striking piece of jewellery (a bracelet to be precise). Don't get too excited, it's not real gold or anything! 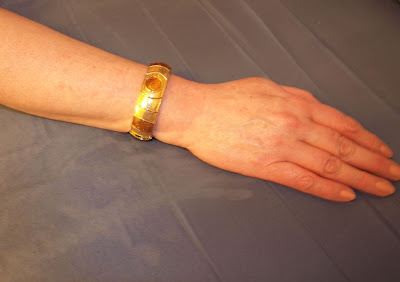 whereas I went for a new plant-pot. Each to their own! 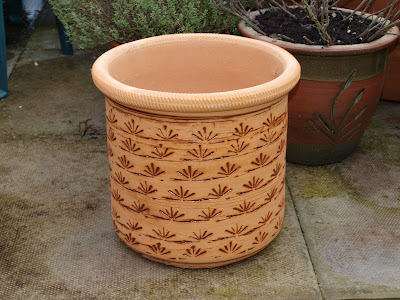