Prompted by an enquiry from a reader (Hello Debbie!) I thought it was about time I wrote another post about weedkiller, in order to keep this issue "in the public eye" rather than let it be forgotten. 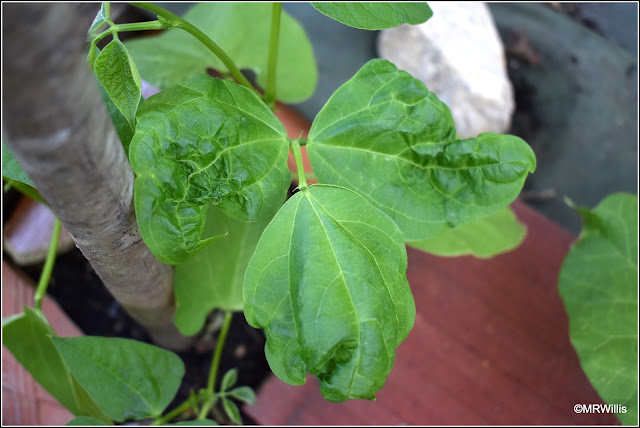 Most of my regular readers are aware of this already, but there are still people (for example new gardeners) who don't know that much of the commercial compost sold these days is contaminated with weedkiller. Mostly these chemicals are used in agriculture to suppress broad-leaved weeds in grazing pasture, and in domestic lawncare products. They find their way into allotments and domestic gardens via two primary routes: the agricultural products (usually Aminopyralids) come in with animal manure - often provided free of charge to allotmenteers - and the lawncare products (usually Clopyralids) enter via municipal green waste, which is frequently used as a significant ingredient in bagged compost.

There is legislation and regulation covering the use of such products, but in my experience it is often bypassed or ignored. I have in the past raised complaints with manufacturers (e.g. Dow Agrochemicals / Corteva) and with regulators and health authorities (e.g. DEFRA, HSE), but to be honest, I made little progress with either. They still continue to brush aside such complaints, denying that there is an issue, and refusing to accept responsibility. Until someone in high authority (or perhaps a prominent gardening personality) takes this up, the issue will remain one which you and I have to cope with on our own. My approach has been to stop buying products made by anyone who has supplied me with contaminated material. Top of my hate-list is Westland, whose products have consistently been bad.

The trouble is that these substances are incredibly powerful and persistent. Despite manufacturers claims that they break down rapidly, I have found that their effects last for literally years. Once they are in your garden it is almost impossible to eliminate them, because they get into the soil and into any home-made compost that you make.

This year, because of the difficulties presented by the COVID-19 pandemic, I have bought very little compost (only 3 bags of "100% organic" composted stable manure from Harrington and Jessup, and 3 bags of Melcourt Sylvagrow). With one exception (described later) I have had no problems with seedlings raised in these materials, but as soon as I planted into garden soil (e.g. in my raised beds) the problems reappeared. The plants most affected are beans. This is a Runner Bean leaf (as are also the ones in my photo at the start of this post). 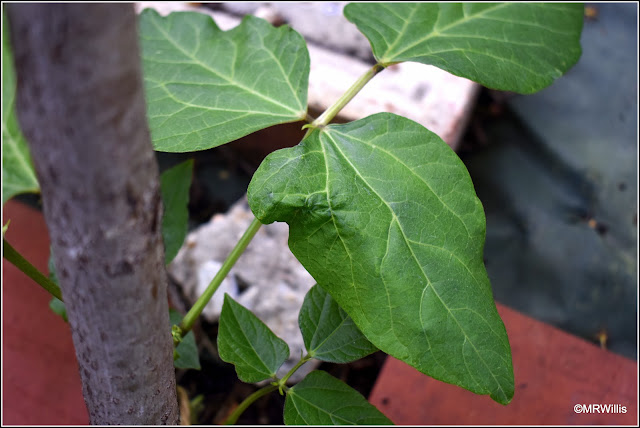 These distorted leaves are on a climbing French Bean "Cobra". 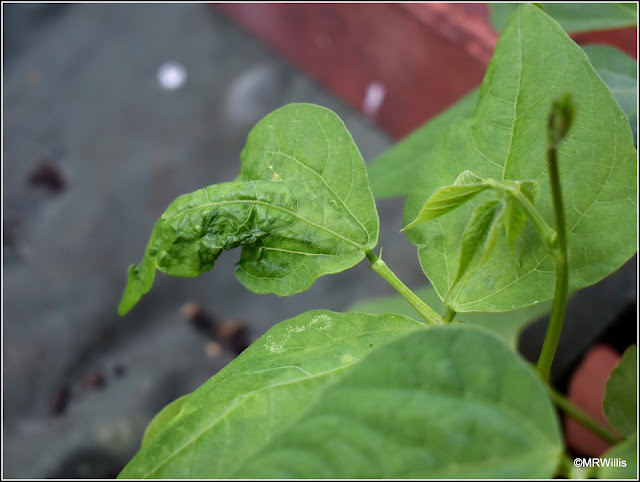 Fortunately this year the problems I am encountering are not severe and the beans will probably be OK, though it is likely that their vigour will be less than if they had been uncontaminated. I'm fairly sure that they have been affected by weedkiller residues in the soil of the raised bed and in the home-made compost which I applied to it.

The "exception" I mentioned above relates to a batch of Broad Beans which I sowed in small plastic pots. I sowed four such batches, and they were all OK except one. The beans in that one batch came up distorted and blackened at the edges. 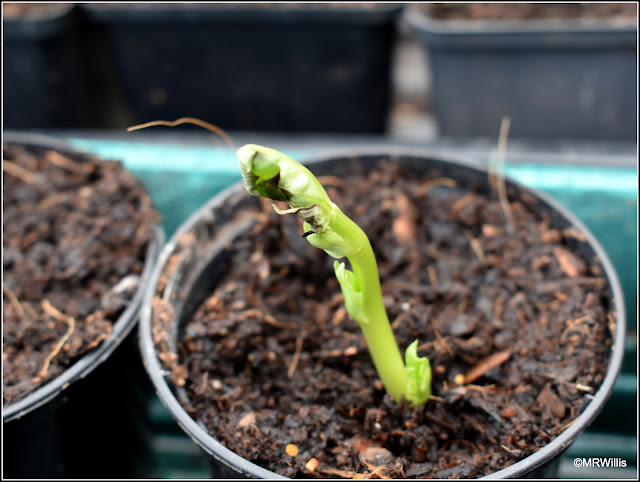 Those beans were from the same pack as another batch that came up looking fine, and were sown in compost from the same bag. The only thing I can think of that may have caused the damage is that I used pots that had not been washed, only brushed out. It is possible that some residue of last year's contaminated compost remained in them - it only takes a minute quantity to cause damage. Broad Beans seem to be the vegetable most susceptible to harm caused by these weedkillers and are often used as a test for its presence. You plant some beans and see how they fare, before committing to growing anything else in the compost you are using.

Some years ago (I think it was in 2014) when I first became aware of this issue, my tomato crop was very badly hit and almost all my plants were affected. Since then I have become very aware of the signs of contamination. The first sign is abnormally thin, spindly (sometimes described as "fern-like") foliage, with distorted or curled-in leaves. A couple of my plants this year have some leaves like this: 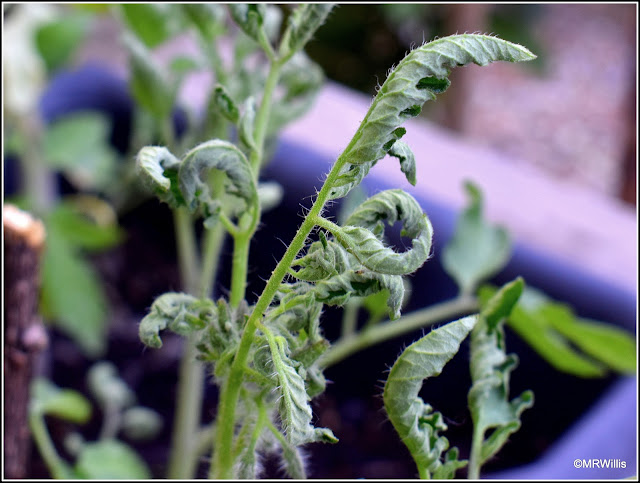 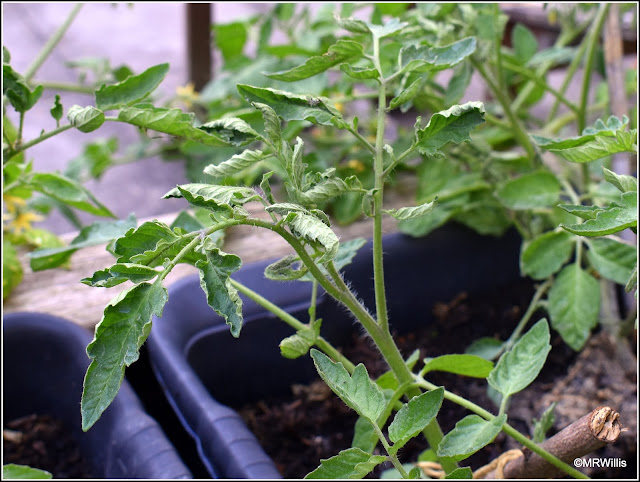 Abnormal bending - often in a spiral fashion - of the leaf-stems is also another common sign, and can be mistaken for the normal curling-in effect that can occur on tomato leaves when cold nights follow hot days. So far, none of my plants are exhibiting this symptom this year, but let me show you a photo from 2108: 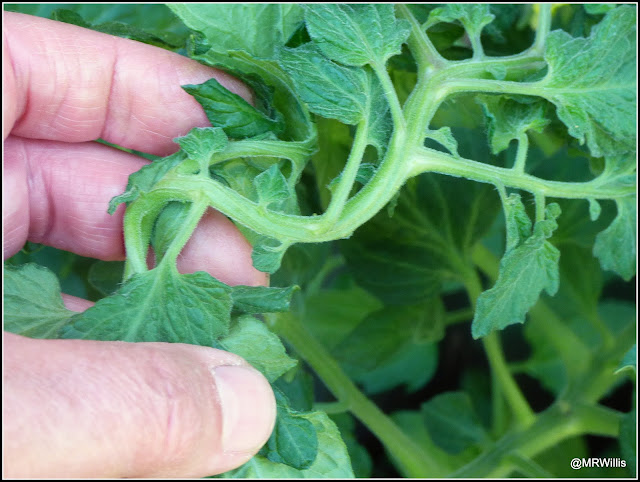 Damaged and distorted leaves obviously affect a plant's ability to absorb energy from the sun, so its vigour will be reduced and the whole plant may be stunted. The amount and quality of fruit is also likely to be adversely affected. This photo of a tomato fruit was taken in 2014: 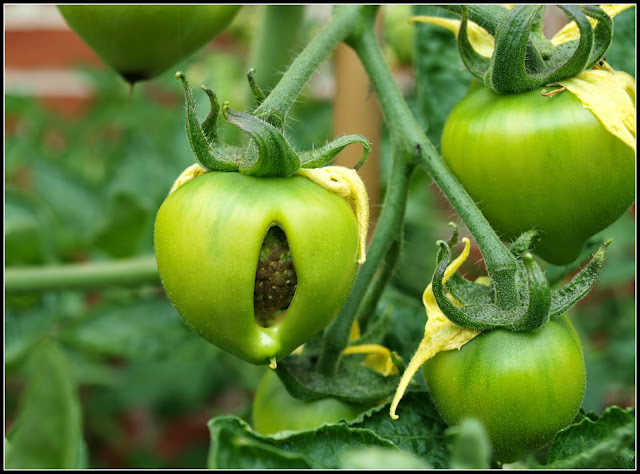 As I have mentioned, the levels of weedkiller contamination in my garden this year are not severe, and my plants will probably deliver a decent yield despite it, but I still feel aggrieved that it's there at all!

At least as a result of this post perhaps some newbie gardeners will now be able to understand the reasons behind previously un-diagnosed plant damage in their own gardens. I urge you all, if you get the chance, to lobby for a review of the use and regulation of these dangerous chemicals! I maintain that sellers of commercial compost have a duty to ensure that it is fit for purpose and will nurture not damage our plants.

I have written about this subject several times before, so if you want to know more, please use the SEARCH facility in the side-bar of my blog and look for the word "weedkiller".
Posted by Mark Willis at 12:00