I suspect that most people (like me) associate brassicas with the Winter season. Cabbages, Kale, Brussels Sprouts, they all seem like things to be eaten when the weather is cold. However, there are brassicas that are suitable for every season of the year. I'm growing some Summer-cropping brassicas this year: Kohlrabi, Broccoli and Brokali (the latter being a hybrid of Broccoli and Kale).


I don't normally grow Summer brassicas, but this year is different, due to the pandemic and the lockdown arrangements that have been necessitated by it. When the virus began to be really serious and the lockdown was imposed, it appeared that food supply (especially of fresh vegetables) might become difficult, and I wanted to have some vegetables in the garden that would deliver an early harvest for us, just in case we couldn't buy any.

To give you an idea of how quickly these vegetables grow, I should mention that I sowed the seeds on 25th March, so from sowing to harvest will be something like two and a half months.


Well, the harvest is nearly ready. The Kohlrabi needs maybe another week or ten days. I don't want it to get too big because it would probably become tough, but equally harvesting too soon would be to waste its potential. I think I'll let them reach about the size of a tennis ball. They are currently about the size of a ping-pong ball. 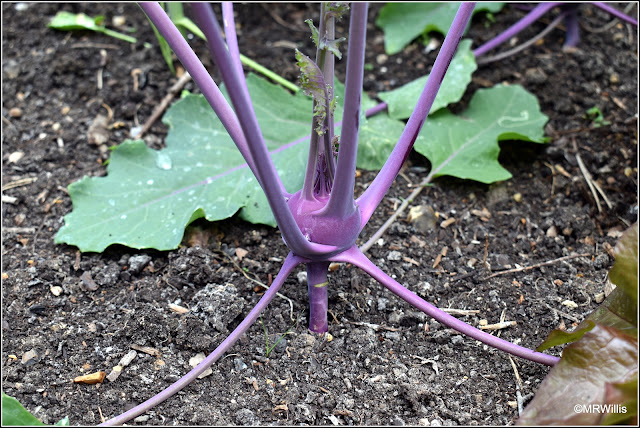 If you're not familiar with Kohlrabi, which is not widely used in the UK, let me say that as the name suggests (Kohl = cabbage, Rabi = turnip), this vegetable tastes like a cabbage but feels like a turnip. The flesh, which is white even inside the purple-skinned varieties) is crisp and juicy. It can be eaten raw - maybe grated as a salad ingredient - or cooked just like a "proper" turnip. The young leaves are also edible, though older ones are tough.

The Broccoli and Brokali are a little further away from being mature, I think, though it's quite hard to tell at present. I have three plants of each type, but unfortunately I've forgotten which is which and they do look very similar! One of the two is already forming little central flower-heads, but the other is not. 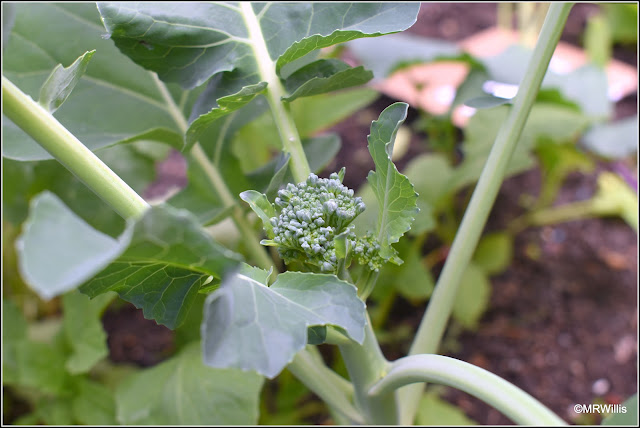 Actually, it would be very convenient if the two types would mature at different times, because that would spread out the harvesting period. I don't really want six plants all cropping simultaneously, since there are only two of us to eat the veg. 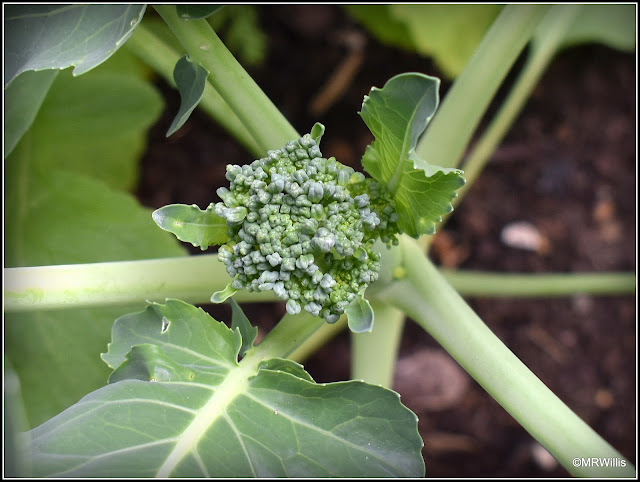 I want to squeeze into this post and update on something that is definitely NOT brassicas - apples...

I have two apple trees growing in large (60-litre) pots. This year they are side-by-side, about 3 feet apart, in the hope that they would assist each other with pollination. Strangely, one of the trees ("Laxton's Superb") has produced masses of fruit, but the other ("Winter Banana") has not. In the hope of getting some bigger, better-quality fruit this year I have been ruthless with thinning out the little apples, especially on the Laxton's. I have made sure that there are no more than two fruit on each spur: 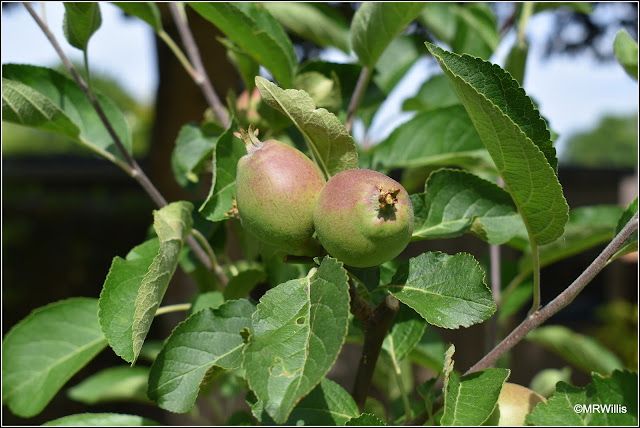 I've noticed something very odd. In many cases one of the remaining pair of apples has developed a lot faster than the other, leading to a big disparity in size. I suspect that the tree may decide to abort the smaller fruits and put its energy into the larger ones. 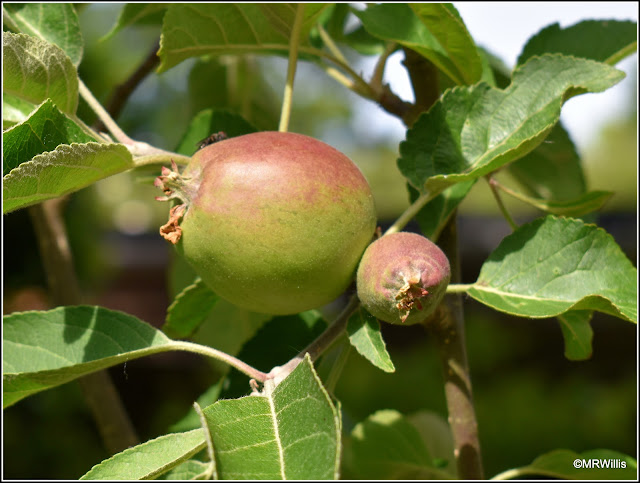 At this time of year fruit trees often shed a lot of fruitlets anyway, in what gardeners term the June Drop. It's Nature's way of ensuring that the trees don't produce more fruit than they can sustain.
Posted by Mark Willis at 12:00