The weather over the last few days has been quite good gardening weather - cold, but dry, still and occasionally sunny. I have already written about making progress on the new raised beds, but I have done a few other tasks too.


This is the bed in which I am going to grow my Broad Beans: 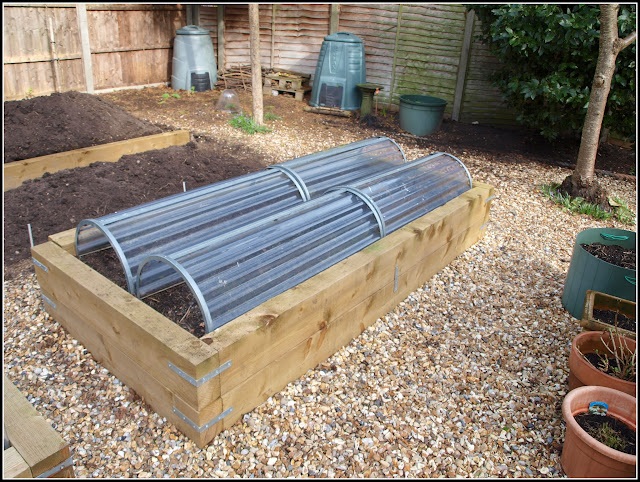 I have covered it with my four "Longrow" cloches, to warm the soil before planting the beans. The beans themselves are only just germinating, so there is no imminent prospect of planting. I wrote the other day about sowing the Broad Beans in plastic containers. Well, a couple of days ago I checked for signs of germination and didn't see any, so I brought the containers indoors. The increased temperature did the trick all right, and the beans soon sprang into action. I expect to be planting about 24 bean plants, of three different varieties.


I have also sowed some more peas, in one of the raised beds this time. In the past I have not had a lot of luck with peas - they always seem to develop a bad case of mildew - but I am determined not to be beaten. I have heard recently that volcanic rock-dust is beneficial for reducing the incidence of mildew in peas, and since I gave all my beds a dose of that stuff just the other day maybe I'll be more successful this time. This is the bed where the peas are, photographed just before sowing: 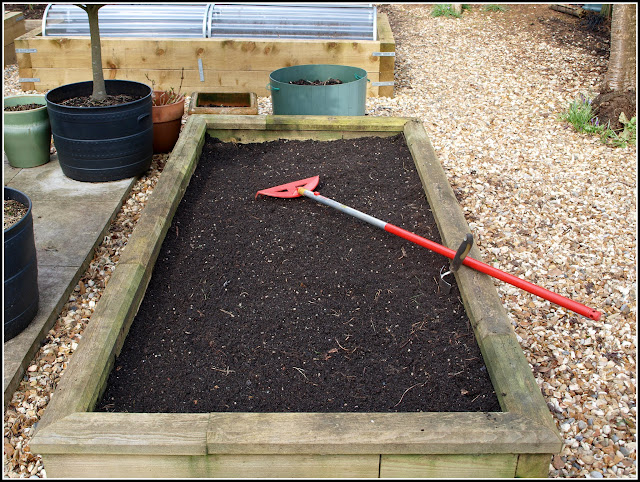 I have put in two rows of peas, one of "Early Onward" and one of "Terrain". The latter is allegedly very resistant to both downy and powdery mildew, so it should have a good chance of success.


After sowing I covered the bed with a piece of chicken wire. Hopefully this will stop the cats / foxes from interfering with it. The six taller metal posts seen in the photo below will eventually support more wire for the peas to climb up. The shorter (light-coloured) rods are just for keeping the chicken wire in place. 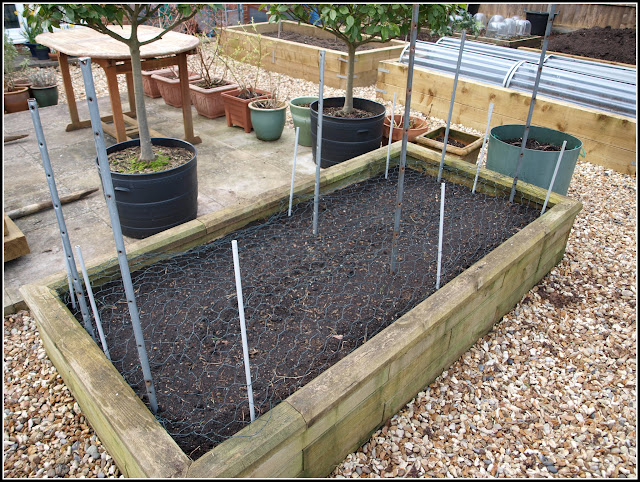 I have also sowed some lettuce seeds in small pots that can be kept under cover, in the hope of getting an early start in the Salads department. With the salads I'm going to do what I usually do - sow small quantities, but often (i.e. "successional sowing"), because no-one wants a glut of lettuce that all matures at the same time. The ones I have chosen this time are all from part-used packets: "Tom Thumb", "Amaze", "Devin" and "Cervanek".