The first of the Winter veg

After a couple of weeks of warm sunny weather at the end of September and beginning of October, we are now back to weather that is more typical of this time of year - cooler, greyer, windier...

At this time of year, wild game, such as pheasant, hare, partridge and venison is at its best, so I decided to cook a meal based around some venison steaks. Naturally enough, I felt this to be an ideal opportunity to bring in the first of my Winter veg. [Ali: Although these veg have been growing throughout the Summer, the fact that they are harvested in Autumn/Winter makes them Winter veg, at least for me!]. 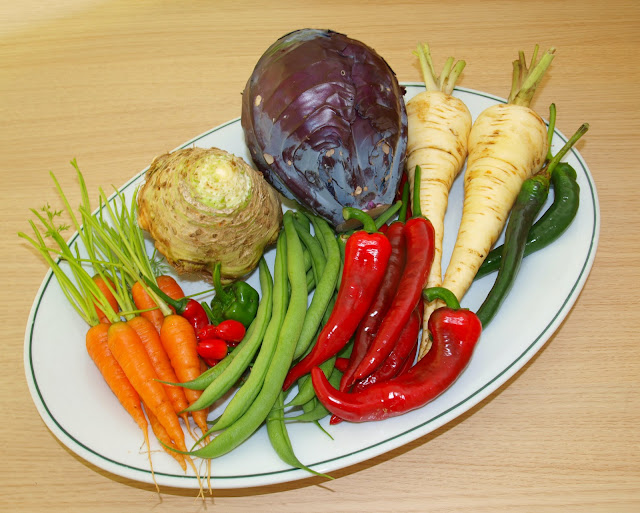 In the photo above you can see Red Cabbage, Celeriac, Parsnips, Carrots, French Beans and several types of Chilli. I would class the first three as Winter veg.

The cabbage was not huge, but it was very dense. It weighed 900 grams.

Likewise, the much-anticipated Celeriac was disappointingly diminutive (300 grams), but the flavour was very strong.

The Parsnips were "not bad", as we say here in England when we are mildly satisfied. A bit more canker than I expected, since this variety ("Panache F1") is supposed to be very canker-resistant, but it's only skin-deep and doesn't affect the flesh inside, and the roots are a decent size and quite straight. They just wouldn't win any prizes at a veg show!

So this was our meal then:
Venison steaks (beaten out very thin, then marinated with Bay leaves, Thyme, crushed Juniper berries and a splash of Gin)
Celeriac and potato mash
Braised Red Cabbage
Roast Parsnips 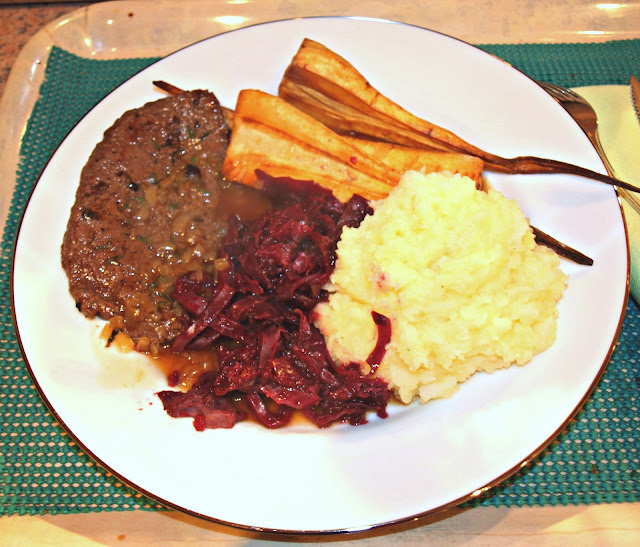 Dessert:  fresh mango, with raspberries from the garden.

Does that sound OK?

I have to say that the flavour of home-grown veg is way superior to shop-bought stuff. Those parsnips were sweet and fragrant and strongly-flavoured. The ones you get in the shops have probably been harvested weeks earlier and their flavour soon fades - sometimes to practically nothing. This is why parsnips people sometimes say that parsnips are tasteless! And the celeriac: well, even a tiny quantity goes a long way because of its pungency. Potatoes for texture; celeriac for flavour; perfect combination.
Posted by Mark Willis at 17:30