I like beans. Which is why I grow so many. Not that I have huge quantities of course, just a steady flow of enough to provide us with a supply throughout the Summer and Autumn months.

Cropping at present are the "Delinel" dwarf French Beans. I have two large pots of these, each with three plants. The pots are the ones in which my early potatoes were grown, so they have been very useful.

My "Cobra" climbing French Beans are just about ready. Actually, this is the second lot. The first ones were in amongst my main crop of miscellaneous climbing beans (I think there were only two plants of that variety in the end; I lost track when I had to re-plant after several plants died). This batch is the one which I planted in the Cucumber tub when I realised that the cucumbers were never going to do much. They are just going to mature in time - before the first frosts I hope. I think I could harvest a few of them now, but I know that Cobra beans grow very big without going tough, so I shall leave them a little longer.

This is the mass of little pods forming at the tops of the Cobra plants.

These are the ones in the big tub that housed my Marrow plant earlier in the year. You may remember that the Marrow produced one solitary fruit before dying off.


The Runner beans have had a second flush of flowers, which are just beginning to set pods. They will have to hurry up if they are to reach maturity before the weather turns cold! 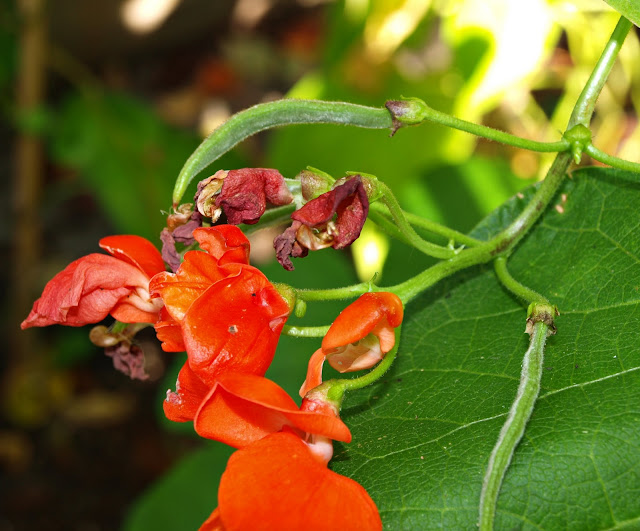 My final batch of shelling beans is in the airing-cupboard now, finishing drying. I'll show them to you soon.
So it's fresh beans during the Summer, and dried beans in the Winter - that suits me fine.
Posted by Mark Willis at 17:30