The Sculpture Park, Churt, near Farnham

In a change from writing about my own garden, I want today to describe a recent visit to the Sculpture Park in the Surrey village of Churt, just south of Farnham.

We had heard about this place from my brother, who bought a small piece of sculpture from there a couple of years ago. To be honest, I'm usually not particularly interested in sculpture, but I think that is because I associate it with stuffy old museums and corporate HQ buildings. Sculpture in a garden environment is another matter altogether though. The Sculpture Park at Churt is situated in 10 acres of  beautiful woodland / wild garden, and contains several small lakes or ponds. A stream runs through the middle of the garden, connecting the lakes and everywhere is full of the sound of gently flowing water. 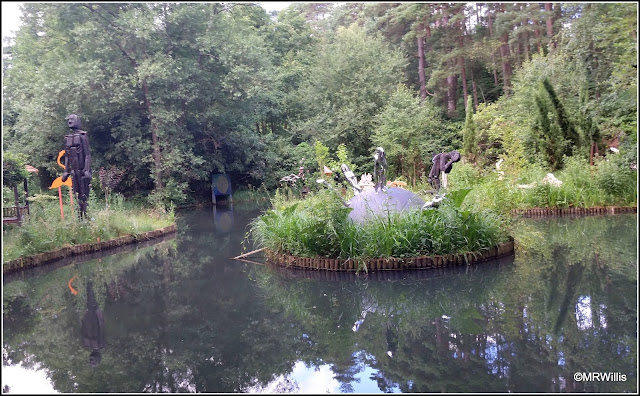 This little "Victorian folly" scene was very reminiscent of something out of a Harry Potter book! 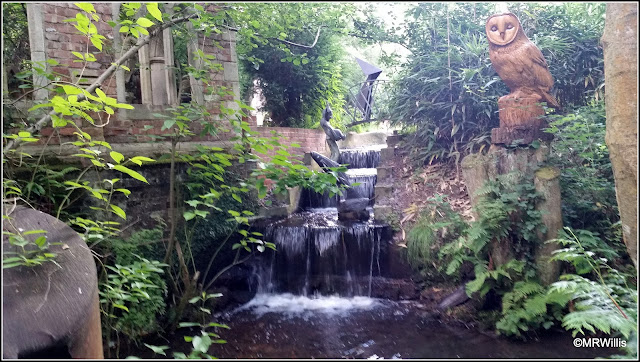 The park has over 2 miles of winding pathways. Four colour-coded signposted routes of differing lengths allow for varying levels of ability and interest. We had two of our grandchildren (ages 7 and 10) with us and they had a lot more energy than us! The paths do have a lot of steps, so it wouldn't be suitable for people with physical disabilities or in wheelchairs. At every corner a new sculpture or series of sculptures is revealed, so there is always something interesting to look at.

The actual sculptures are the work of about 300 different artists, and cover a huge range of styles - some realistic, some stylised, some just downright bizarre. People come to this place not just to look at the sculptures, but also occasionally to buy them. Almost all the pieces are for sale, but some of the prices are eye-watering. On entering the park (price £10 per adult, £5 per child / senior citizen) you are given a map-book which also includes brief descriptions of the sculptures and their prices. One piece, a giant dragon made of thousands of old iron horseshoes, was priced at £495000! There is also a gallery / gift shop where those with smaller budgets can buy smaller items.

My preference is for the more realistic types of sculpture, like this magnificent gorilla: 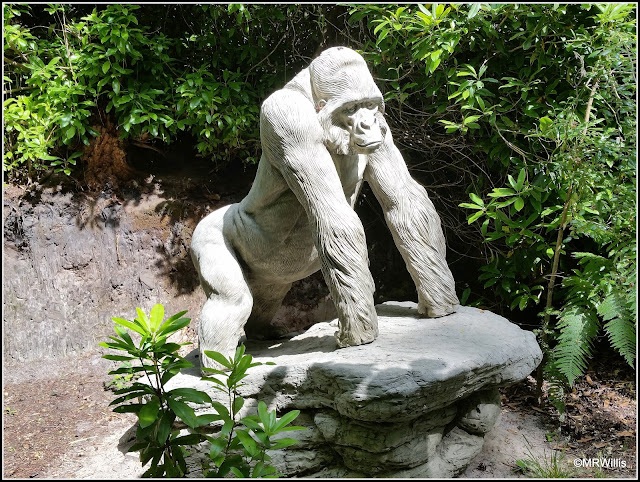 Or this immensely powerful bull. 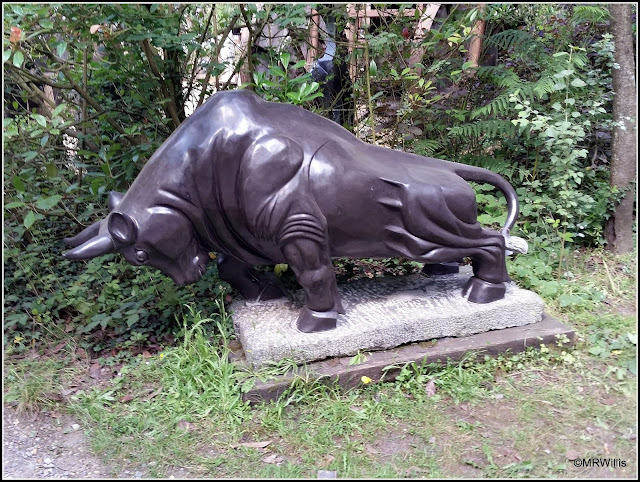 However, I think if I were to be able to afford my pick of everything in the park, I would choose this: 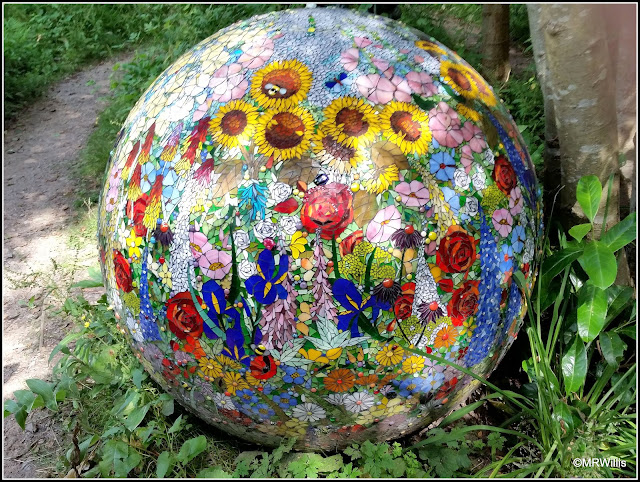 My photo doesn't really do it justice. It was about three feet in diameter and made of thousands of tiny pieces of ceramic (or were they glass?). Close inspection revealed lots of enchanting details, such as this cute Bumble Bee. 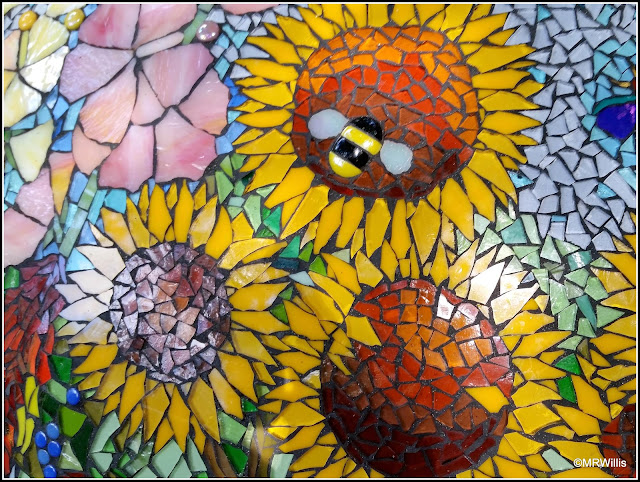 If I had a big (VERY big) garden, this pair of Agapanthus would probably look nice in it. they were about 10 or 12 feet tall. 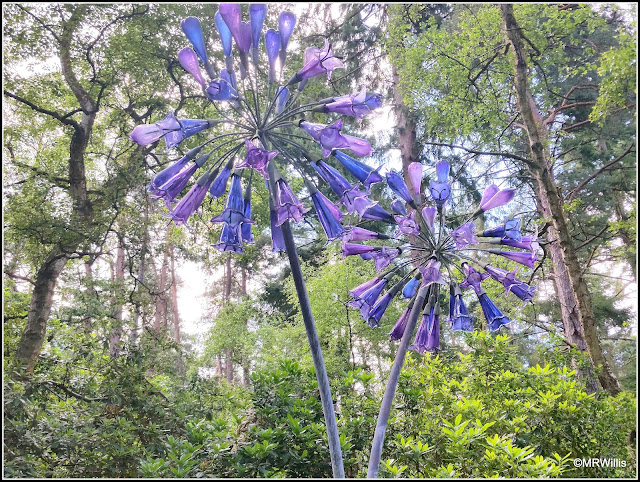 Talking of pairs, how about these "Dandelion clocks"? 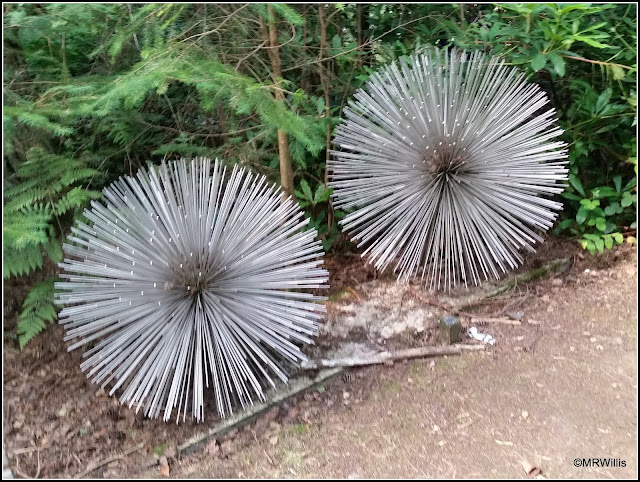 Is this brightly-coloured tank in the "realistic" category, do you think? (I seem to remember it was priced at a mere £65000). 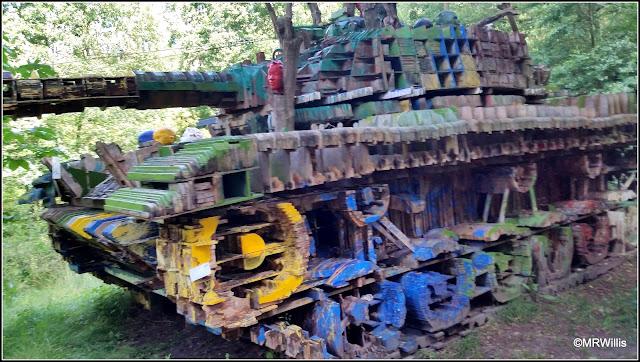 I liked this sort of wave pattern piece, inset with ammonite fossils... 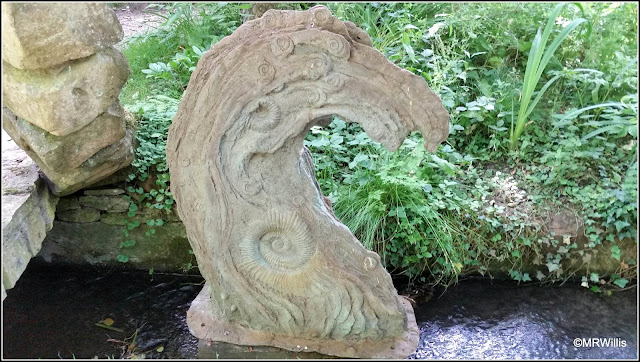 Just next to it was this simple but very atmospheric "people crossing bridge" piece which looked very beautiful silhouetted against the surface of the pond behind it. 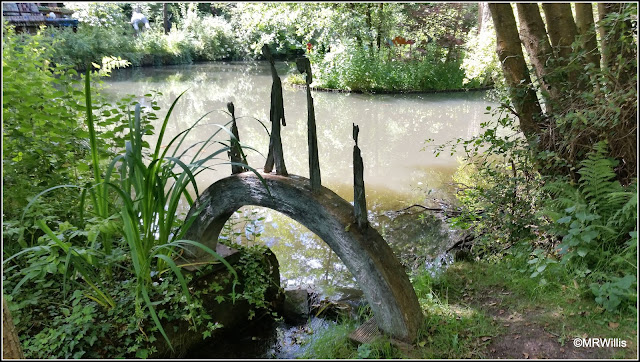 Here's another nice light-and-shade one: 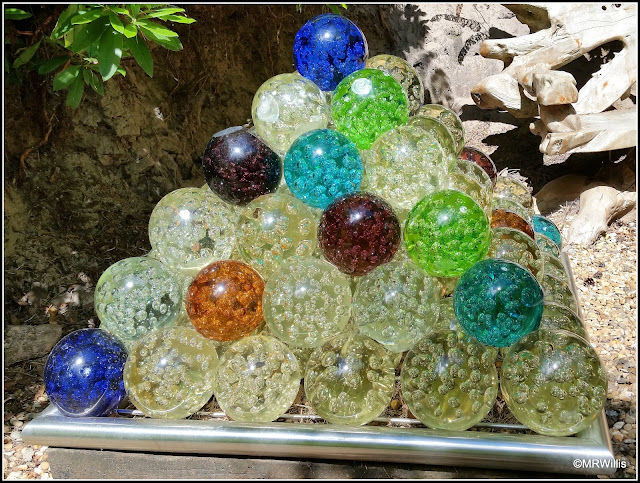 This one definitely falls in the bizarre category: 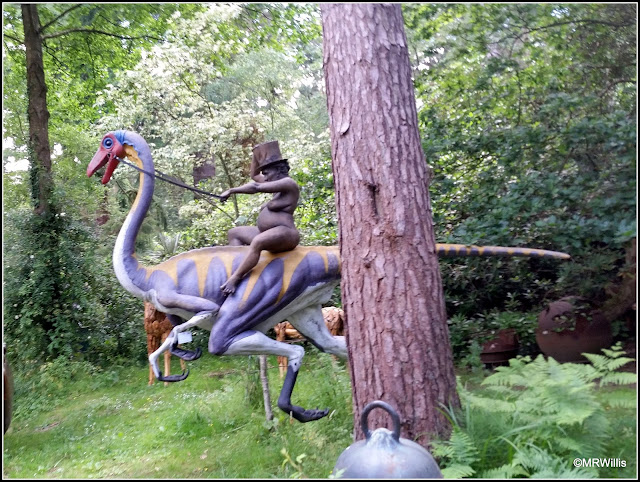 As does this. Is it aliens touching toes...? 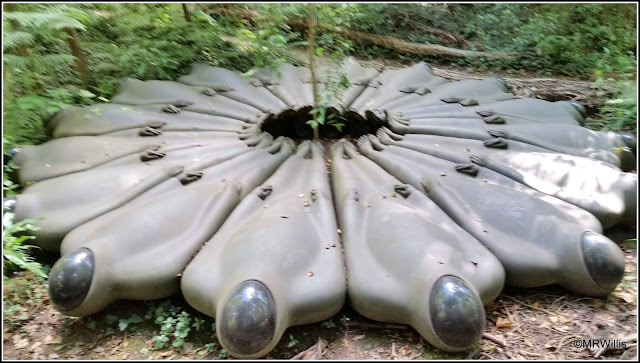 I think this sinister swamp-man would perhaps be too scary for most people to have in their lily-pond! 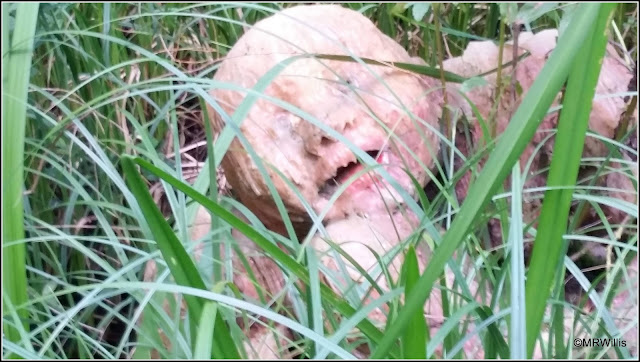 There were lots of sculptures made of wood, many of them single pieces of wood carved into very complex garden furniture, but also many skillfully assembled from small wood fragments like this one: 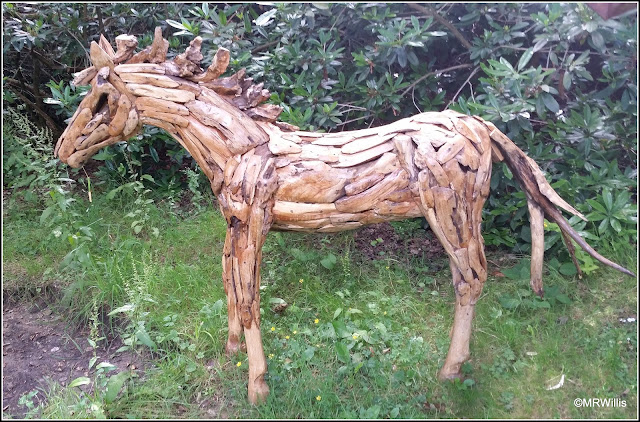 Since the Sculpture Park has about 650 sculptures at any given moment (the stock changes as purchases are made), this blogpost could go on for a long time, but hopefully I've shown you enough to give you a flavour of the place. Let me just end with one more photo, linking aptly to my other hobby of fungi-hunting... 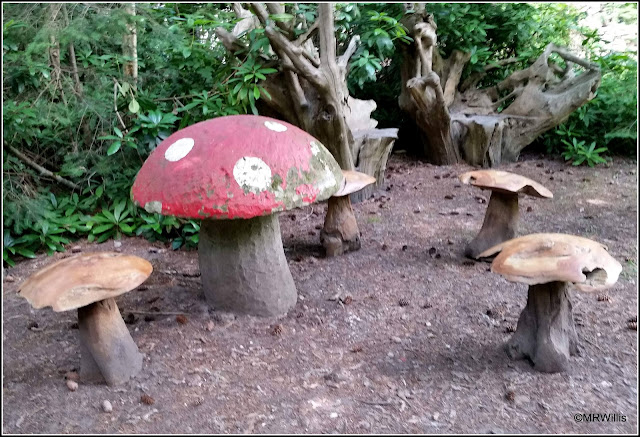 The Sculpture Park exceeded all our expectations and I have no hesitation in urging you to visit it if you ever get the opportunity.
Posted by Mark Willis at 12:30