Do you have a favourite potato variety?

This week I have been harvesting more potatoes. This time they are my two types of Second Early, "Charlotte" and "Nicola". 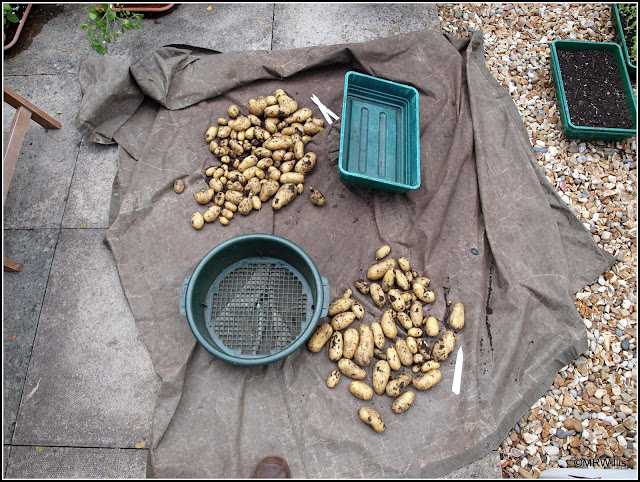 As with all my other potatoes, these were grown in 35-litre plastic tubs, 2 seed-tubers per tub. Two tubs of "Charlotte" yielded 1.19kgs, and two tubs of "Nicola" yielded 2.27kgs.


I have been growing potatoes for many years now and I have tried a lot of different varieties. Each year I have at least six, sometimes as many as ten, varieties. I have a few favourites that I grow most years, but I also usually try at least one new variety to see how it performs and whether I like it. I tend to grow mostly First Early and Second Early varieties, mainly because they mature more quickly than Maincrop varieties and are thus likely to have been harvested before the threat of Blight materialises. This year my only "new to me" potato variety is "Highland Burgundy Red", which unusually for me is a Maincrop variety. Don't ask me why - I bought it on a whim!

At present we are still eating First Early potatoes - "Annabelle" and "Belle de Fontenay"- so I have put most of the "Charlotte" and "Nicola" crop in the garage for storage. They are in a loosely-closed cardboard box which will keep them in the dark but allow them to breathe. I don't usually need to store any of my potatoes for more than a week or two, but I think this year we must have been eating more rice and pasta and fewer potatoes! Unlike First Earlies which need to be eaten promptly after lifting, Second Early potatoes will keep for quite a while - several weeks at least, though not six months or more as Maincrops do. I can't vouch for this personally, but I have heard that the very popular "Charlotte" is NOT very good for storage, because it tends to sprout easily. This is presumably why supermarkets keep them in cold storage.


Anyway, getting to the point of this post... Having grown all those different varieties of potato over the years, which is my favourite? Well, until recently I would have said "Charlotte", which is an excellent all-rounder variety, and hugely popular with amateur gardeners, but I think I have changed my mind. I have been growing "Charlotte" and "Nicola" side-by-side for five years now, and I'm beginning to veer towards favouring "Nicola". The two types are in truth very similar. They both produce good-looking long oval tubers with waxy yellow flesh which cooks nicely without disintegrating. I think the flavour, though not very strong, is also more or less the same. They both stand well in the ground once mature, which is a big advantage if you don't get the opportunity to lift them as soon as they are ready.


My view that "Nicola" is the best of the pair is based on two factors. First, "Nicola" matures just a bit later than "Charlotte" - indeed some suppliers list it as an Early Maincrop. For me this is a valuable feature because I like to grow several First Early varieties and we need to get through all of those before moving on to Second Earlies. And then there is the yield. Maybe it's because it matures that little bit later and thus has more time to bulk-up, but "Nicola" usually produces a bigger crop than "Charlotte" does. Since the two types are so similar in other respects, maybe this is the deciding factor?

Of course, there are loads of other good varieties of potato available, and different people like different ones, for different reasons. Influencing factors include weight of yield, appearance (e.g. shape and colour of skin and flesh), taste, texture (e.g. waxy or floury), pest and disease resistance, time to maturity, availability to purchase, etc, etc. If you haven't grown potatoes before I strongly recommend going to one of the Potato Day events that take place every year in Late Winter / Early Spring. These events offer a much better choice than most mail-order suppliers, at much better prices, and expert advice it usually available if you need it.


For the record, these are some of the ones I particularly like:-