With the weather forecast now showing a string of mild nights coming up, I have "taken the plunge" and potted-up my tomatoes. By this I mean moving them into bigger pots which will be their final homes. Most of my big varieties of tomato have gone into 30-litre black plastic tubs, like these: 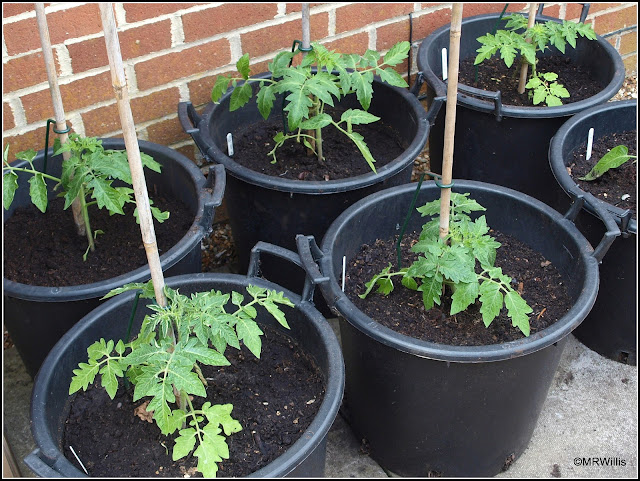 I have done six like that, with a single bamboo cane for support, simply because I only have six good cane-support devices. I do have some of a different design, but over the last couple of years they have let me down a few times, collapsing under the weight of a big plant laden with fruit, so I have decided not to use them. This is what the good ones look like: 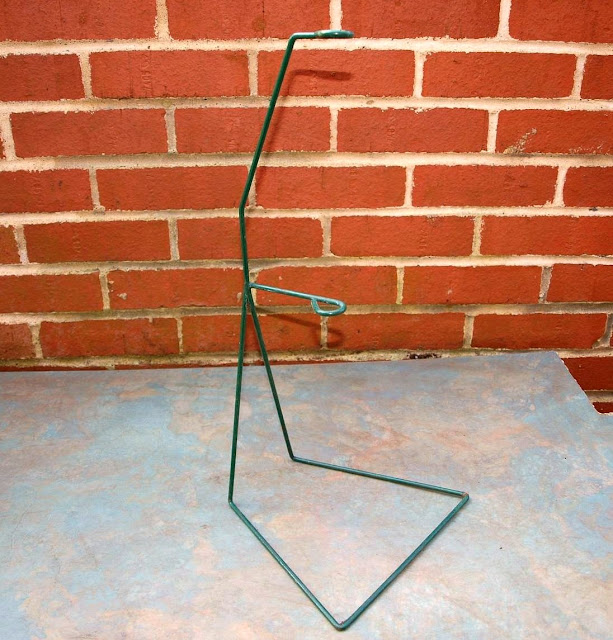 The cane is inserted through the two rings, and is further stabilised by one of these things on its base: 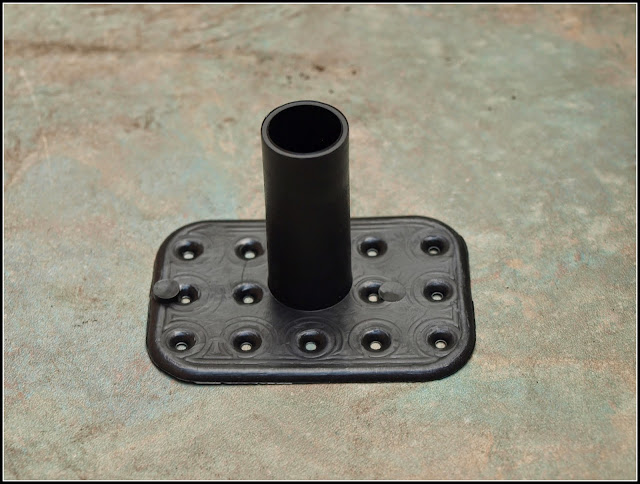 Since the other cane-support things are inadequate, I have conceived this arrangement as an alternative: 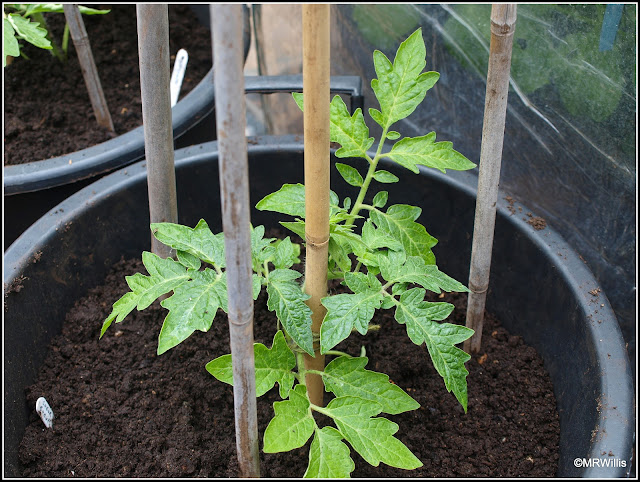 It has one central cane, to which I have tied the tomato plant, and three other canes to support the first one. It might work...


The plants I have put into those tubs are mostly Indeterminate types (i.e. the vines just keep on growing until you stop them) and will be grown as single cordons (i.e. the sideshoots are pinched-out, leaving just a single stem). I usually stop mine, by pinching-out the growing tips, when they get to the tops of their canes, which means they will be about 150cm tall. A couple of the plants are Dwarf types, grown from seeds kindly gifted to me by the famous tomato guru Craig LeHoullier. Dwarf tomatoes, whilst short like the so-called Determinate or Bush varieties, are more like Indeterminate ones in their growth and fruiting habits. A Bush tomato usually produces all of its fruit at the same time, whereas an Indeterminate variety ripens its trusses of fruit in succession. On Craig's website the Dwarfs are described thus: "Craig, through his seed collecting, was aware of a very few so-called dwarf growing varieties, distinct from the determinate types (which were also relatively compact) in that the flavor seemed in general to be better in the dwarfs. These dwarf types are very distinctive in having a thick central stem, stout compact growth, and dark green, crinkly looking (so-called rugose) foliage." I grew a few of these last year and whilst they may have been quite low-growing, they were big plants and needed a lot of support. For this reason they will be given the tripod support system seen above.

As well as the big tomatoes I have as usual planted some smaller ones. My favourite cherry tomato is "Maskotka", which is a trailing variety well suited to growing in hanging baskets or tall planters like this: 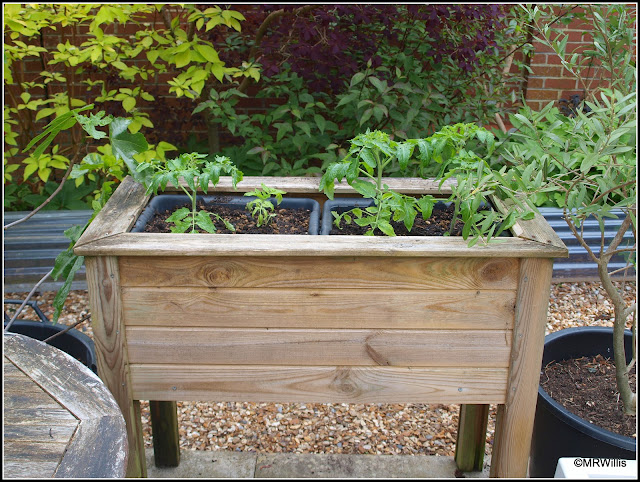 Notice how one of my "Maskotka" plants is very weak and spindly. I only had four seeds (half of last year's pack of 8). Three of them have produced quite decent plants, but the less said about the fourth one, the better! These are the best two:- 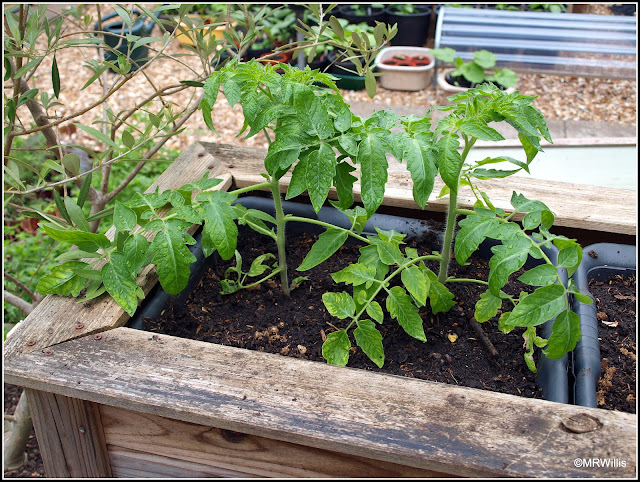 The three rather scruffy-looking specimens seen here (not the one on the left, which is a new-season "Montello") are also "Maskotkas" as far as I know. They are the ones I found self-seeded in the shingle and over-wintered indoors. They are now positioned at the front of our house, below the kitchen window. 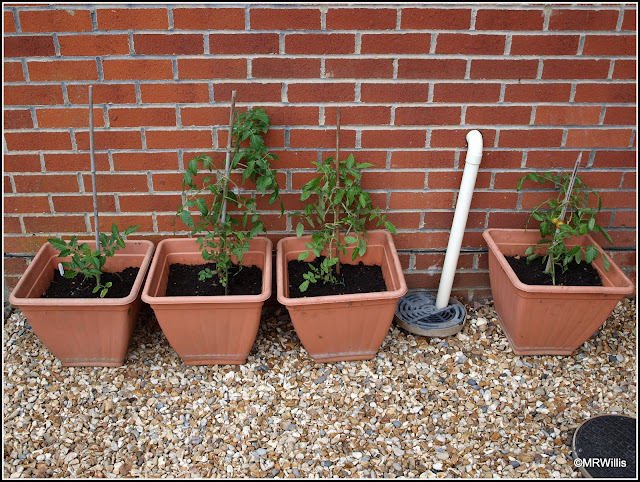 I don't know if they will produce a worthwhile crop, but it will be fun finding out! One of the plants has a couple of fruit on it already, and they appear to be ripening. 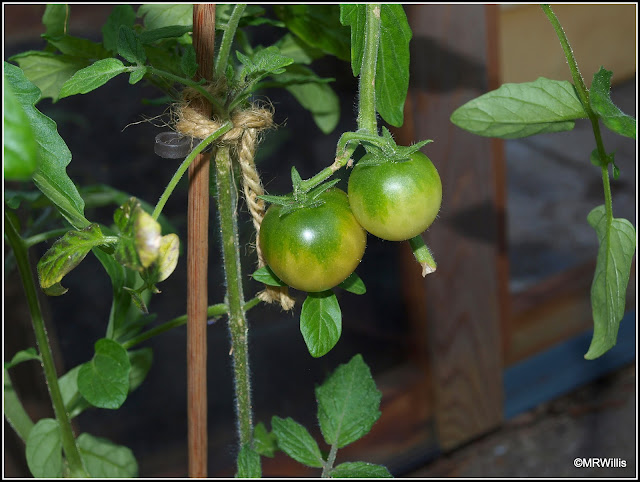 Last of the various types of tomato I am growing is the tiny "patio plant" type, which only grows to about 30 or 40 centimetres tall, and (allegedly) needs no support. I have two plants of the variety "Minibel". I have put them in 24cm pots, and will grow them (Surprise! Surprise!) on the patio. 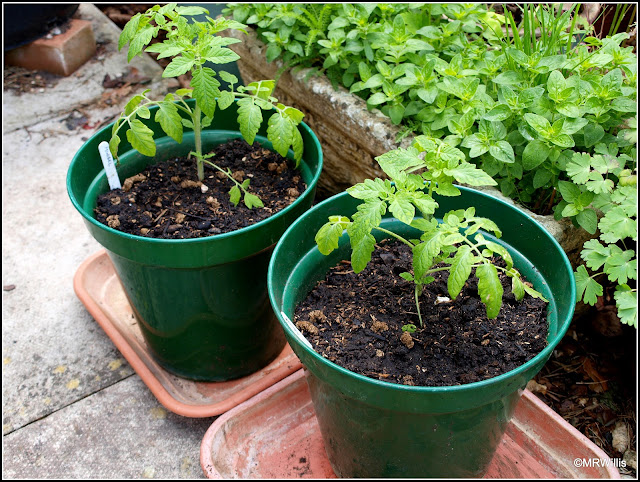