Making maximum use of space

I've mentioned a few times that my neighbour recently cut down a very big conifer tree (a Cypress of some sort), which had formerly shaded a corner of my garden. Well, now that the tree has gone, I have the opportunity to use an area of my garden that was previously completely unsuitable for growing vegetables. Unfortunately, the soil in this area is very poor, the result of years of depletion of both moisture and nutrients by that tree. If you dig down a few inches you find a dense mass of roots. For this reason I think the only viable option in the short term is to build up, not dig down.

I have used a big plastic crate to form what is effectively a very small raised bed, and in it I have planted four Borlotto "Firetongue" bean plants. The crate has some drainage holes in it, by the way.


At each of the four corners - and outside the crate - I have positioned one of my new Hazel rods. 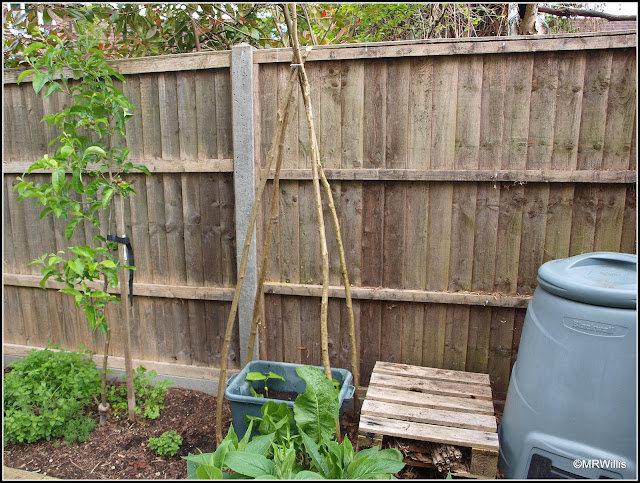 Allowing for a few inches of the poles being underground, and then a few more inches for the height of the soil in the crate, I think these beans will have about 5 feet of vertical support. It's probably not as much as they would like, but then Borlotti are not as vigorous as their cousins the Runner Beans, so they will probably do OK.

I'll see how the beans perform this Summer and then decide what to do with this corner of the garden. I might move that compost bin and the pallet (which is a bug hotel) and build a triangular raised bed. 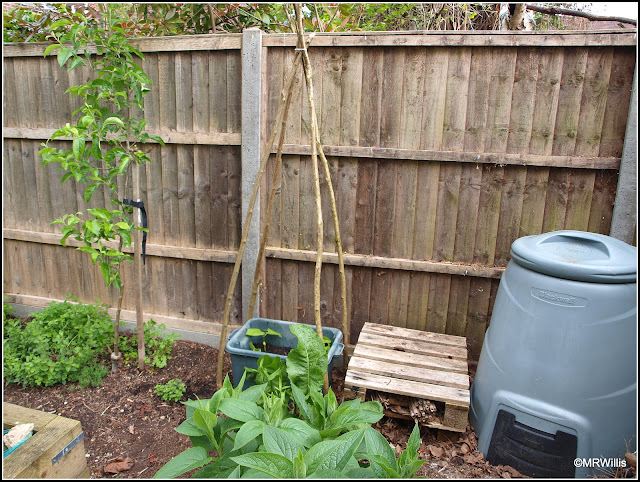 But I might also just devote the area to Comfrey, (some of which you can see in the foreground of the photo above) because I know it will grow practically anywhere.
Posted by Mark Willis at 12:30