A trio of Amanitas

The genus of fungi called the Amanitaceae ("The Amanita family" to the layman!) contains about 600 different species, including some of the most poisonous, such as Amanita phalloides, the Deathcap. However it also includes one of the most instantly-recognizable of all fungi - Amanita muscaria, the Fly Agaric. Everybody knows its bright red cap dotted with white spots, surely? 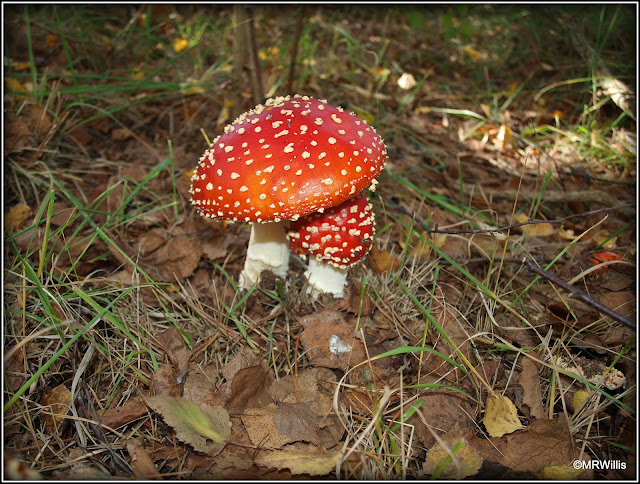 Not everybody recognises a very young Fly Agaric though. They emerge from the ground encased in a cream-coloured lumpy "egg", like this: 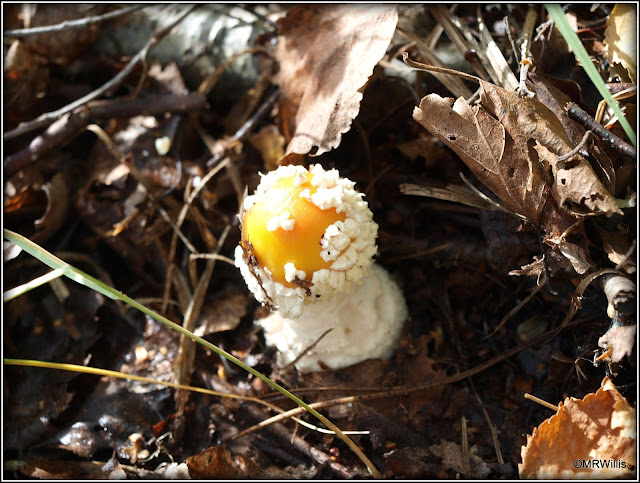 As you can see, the colour of the cap is very variable too, ranging from pale yellow to deep red - though the majority are a sort of scarlet colour. 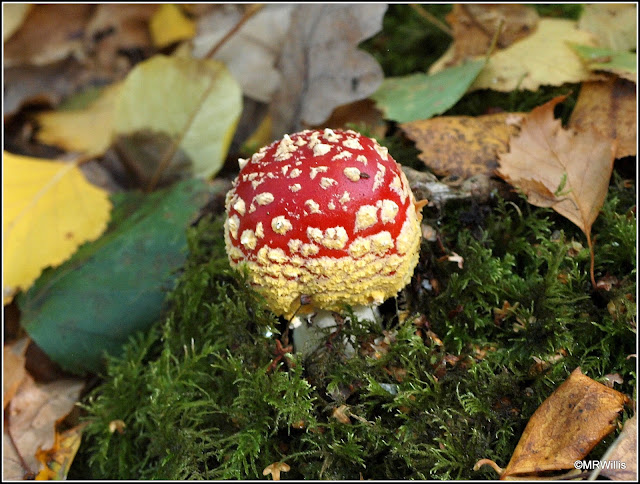 As the mushroom develops, the cap opens out and the stipe (stem) grows longer. I have dug up this "adolescent" one to show the bulbous egg-shaped volva from which the mushroom appears. This part is normally not visible because it is underground. 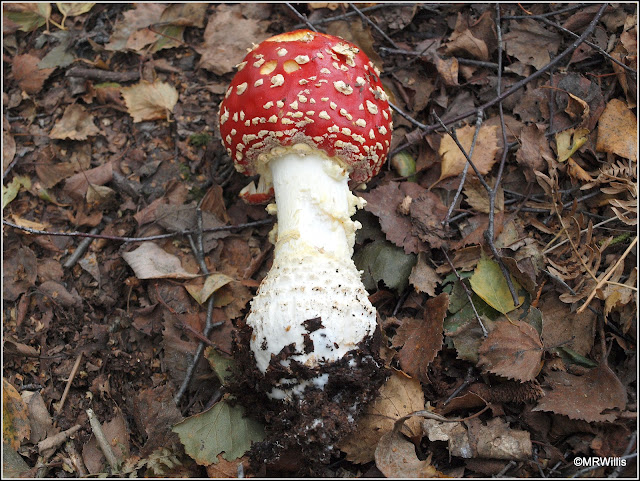 The next photo shows a typical specimen from underneath. You can see the long, tapering stipe with its ring or "skirt" attached up near the top. The white, "crowded" (closely-packed) gills on the underside of the cap are "free" - in other words they are separated from the stipe by a small gap. 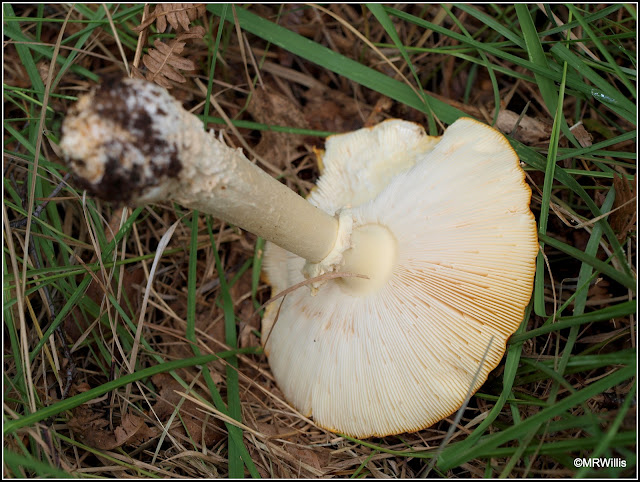 The cap normally reaches a diameter of about 10 - 12cms, but can sometimes be much bigger. The other day I saw one that measured over 25cm. 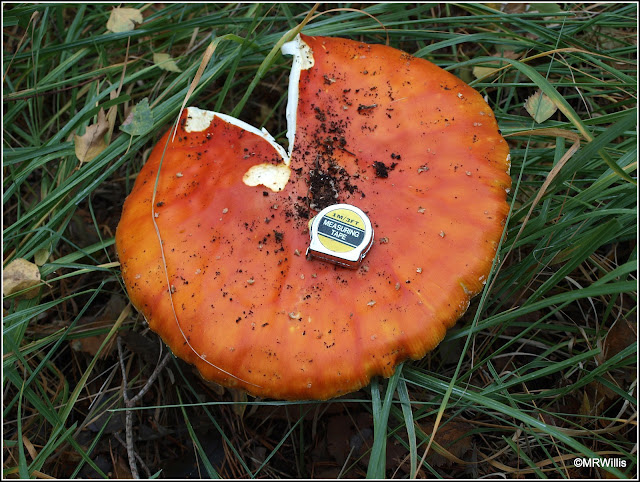 As seen above, the cap of a mature Fly Agaric sometimes lacks the white spots, since these are really just the remnants of the universal veil (the bit like the egg-shell) from which it emerged, and these can fall off or be washed away by rain.

2018 has been a fantastic year for Amanita Muscaria. In the area where I live (NE Hampshire) there have been literally thousands of them everywhere! I usually only see them in ones and twos, but this year they have appeared in our local (mainly Birch) woods in great profusion. 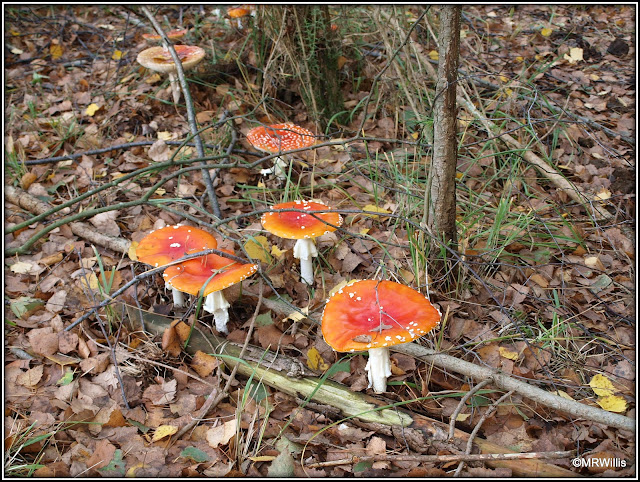 A final word: this mushroom is definitely not one for eating. Although some people claim it has medicinal properties I think its ingestion is far more likely to induce gastro-intestinal discomfort - or worse - in most people!

A close relative of the Fly Agaric is Amanita rubescens - The Blusher. Unsurprisingly, it shares with its relative many similar characteristics, but instead of a red cap, this one has a cap that comes in several shades of brown and the "spots" (veil remnants) are grey.

You'll recognise many of the features of this mushroom as being similar to the Fly Agaric, though it is often rather more squat and burly. Whilst they do grow very frequently in Birch woodland they are also often found in coniferous forests. My experience is that they don't seem to be as abundant as the Amanita muscaria - though this may just be because they are not as easy to see! 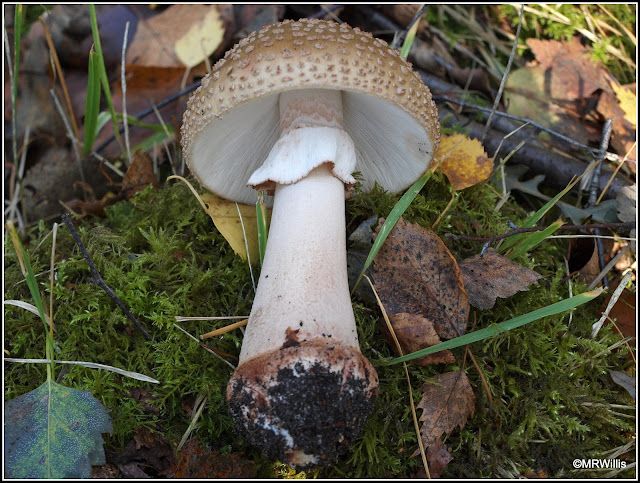 A young Blusher can sometimes be mistaken for an Earthball (e.g. Scleroderma citrinum), and it's easy to see why.

The key identification feature for the Blusher though - as suggested by its name - is that when either the stem or cap is cut it turns red or pink. Look at this gory view... 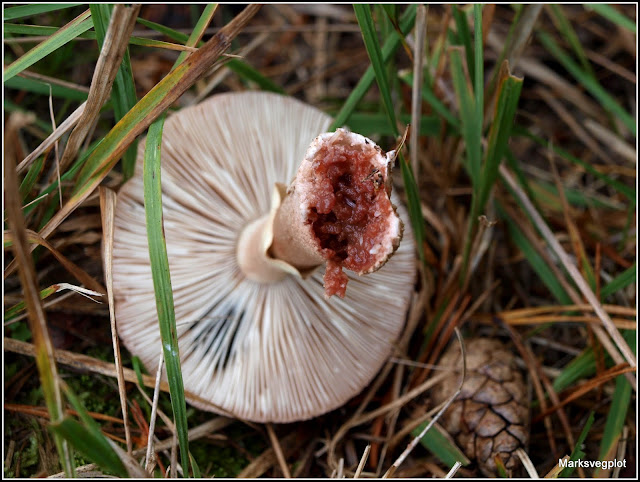 The pink tinge sometimes takes a few minutes to develop. Here it is only just perceptible. 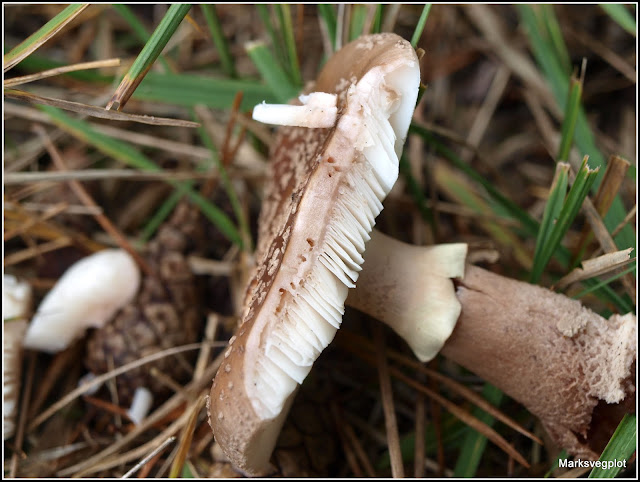 Some people harvest the Blusher for eating, but I've not tried them because no-one ever seems to describe them as pleasant - just "edible (with care)". In any case, if you are going to eat them, be aware that they need to be very thoroughly cooked.

The third of today's trio is Amanita citrina, the False Deathcap. The epithet "citrina" is attributable to this mushroom's characteristic greeny-yellow cap colour (nothing like a real Deathcap!), although there is a much less common pure white form. 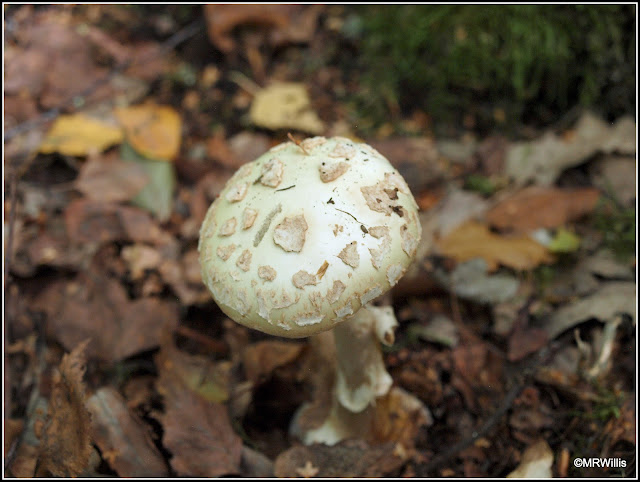 Another distinguishing feature is the fat volva ("egg") from which this mushroom grows. It has a very pronounced ledge or gutter around its top. 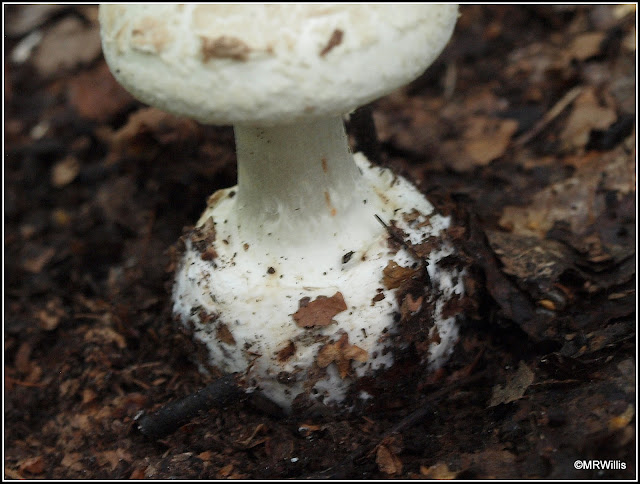 Around where I live the False Deathcap is very common indeed, and it is usually the first of the Amanitas to appear each year. This year I first started noticing them in early September, but I think that is later than normal. Perhaps the very hot dry Summer held them back. I find them most often under Beech and Birch trees.

The False Deathcap has a very prominent stem-ring, and whereas in some mushrooms the ring tends to disappear with maturity, this one usually remains even on old specimens. 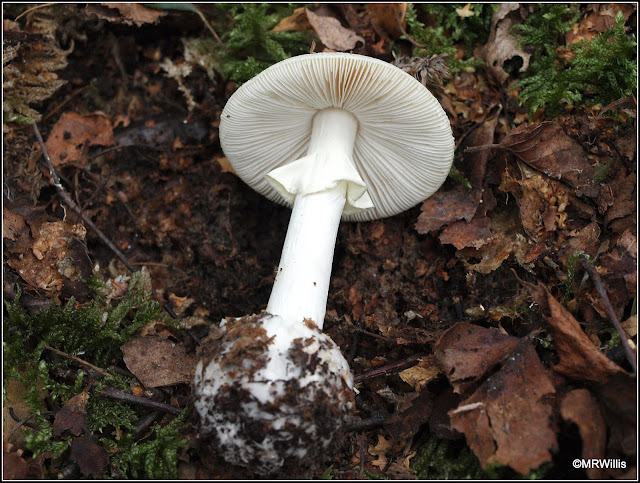 I'm not sure if this is a viable recognition feature, but looking back over my photos of this mushroom I was struck by what a large proportion of them had split caps, like this: 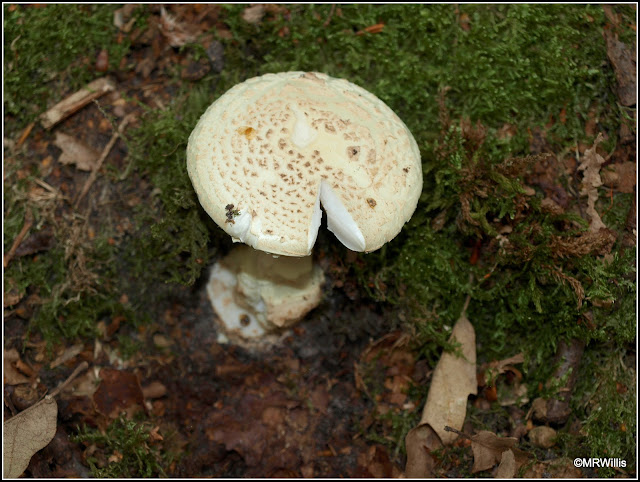 Again, the split caps may have been caused by the dry weather.

As far as edibility goes, this species is another one which is "Just for looking, not for cooking".

As I said at the start of this post, there are literally hundreds of species of Amanita, but the three I have mentioned are probably the ones most commonly found in the UK. I hope my photos and descriptions will help you to identify them successfully - but just don't eat them, will you?
Posted by Mark Willis at 19:15