One of the most delicious and sought-after mushrooms is Cantharellus cibarius - the Chanterelle, also known as the Girolle. 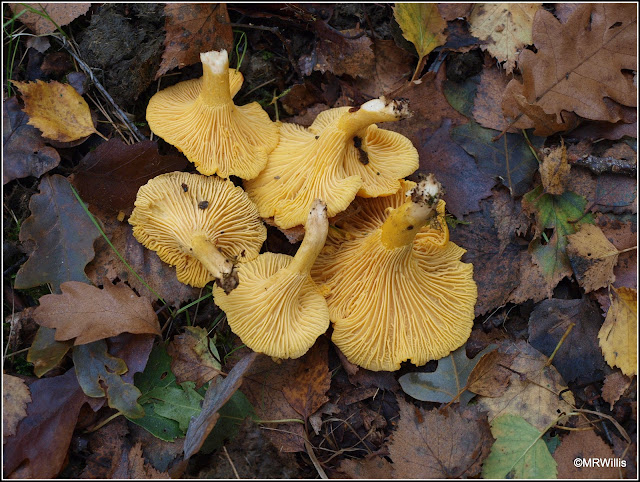 Once you've seen a Chanterelle "in the flesh" it's hard to confuse it with anything else. For a start, its bright egg-yolk yellow colour makes it really stand out amongst the browns of the fallen leaves on the forest floor. 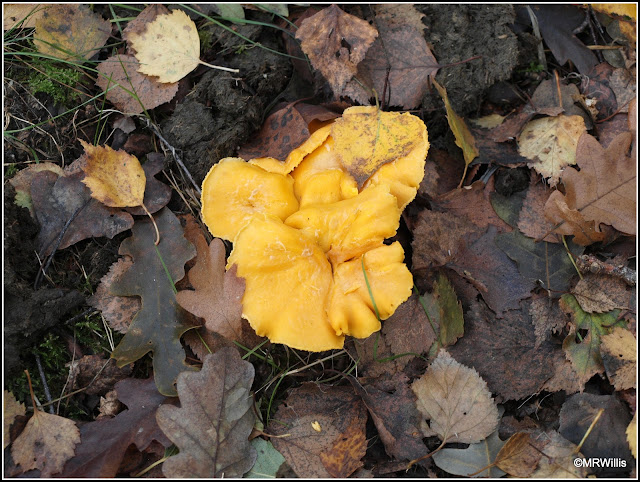 A Chanterelle is normally funnel-shaped, with a wide, irregularly-shaped, wavy-edged cap approximately 5 - 7 centimetres in diameter, though they do sometimes get bigger. The stipes / stems are short - typically 2 -5cms. 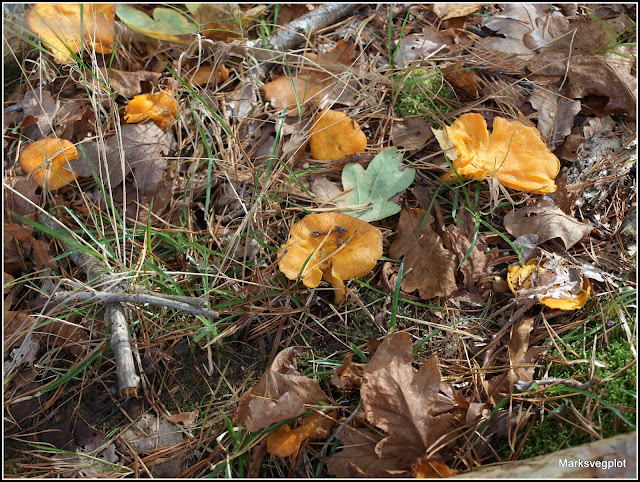 The most obvious identification feature is the fact that the underside of the cap is covered with multi-branched raised "veins", superficially similar to gills. These veins are strongly decurrent - in other words they go a fair way down the stem / stipe as well. When cut open, the stipe is white inside, not yellow. 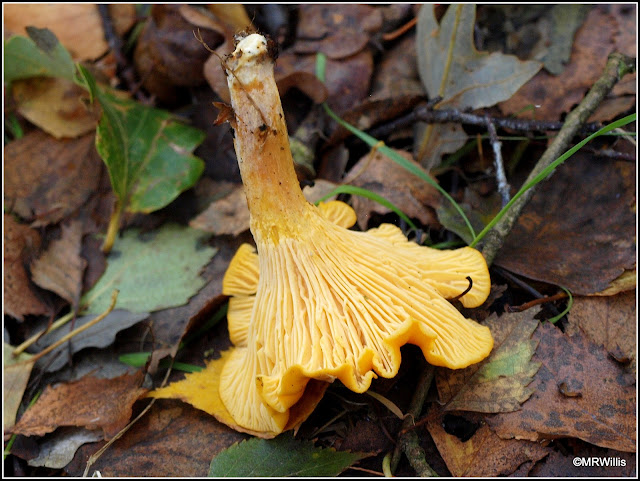 Chanterelles have quite a strong sweet smell - almost floral - some people say it's like the smell of apricots.

Unfortunately I have never found Chanterelles en masse. I know of a few spots in the area where I live that I can expect to find them in the early Autumn, but the yield from each patch is seldom more than half a dozen. Nevertheless, even 5 or 6 good Chanterelles are enough for a sauce, or to make a tasty addition to a pasta dish. 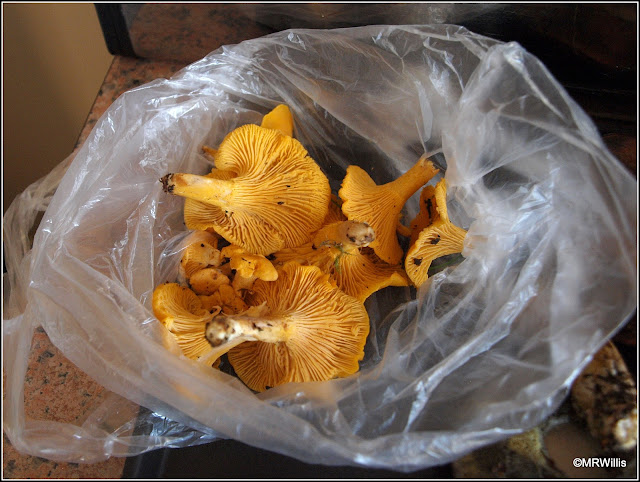 As I have mentioned before, much of the woodland around my hometown Fleet is dominated by Birch, so it won't surprise you to hear that the places where I have found Chanterelles are mostly in Birch woodland, but they also occur under Pine trees. 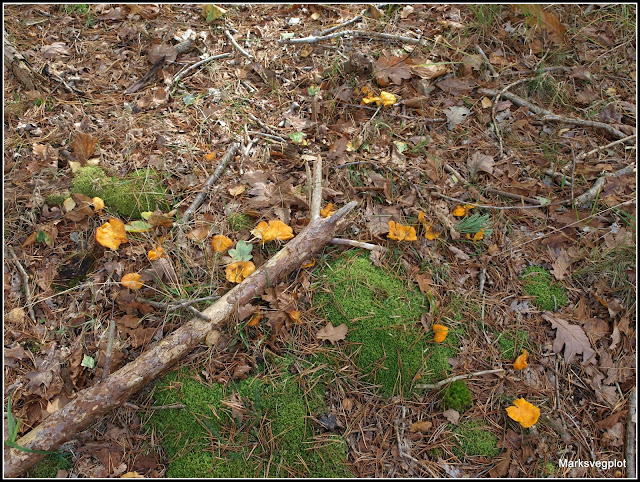 As it happens, Cantharellus cibarius is only one of several types of Chanterelle. Another one which is allegedly widespread in the UK (especially at this time of year) is Cantharellus tubaeformis - the Winter Chanterelle, sometimes known as the Yellowleg Chanterelle. I think you can see why... 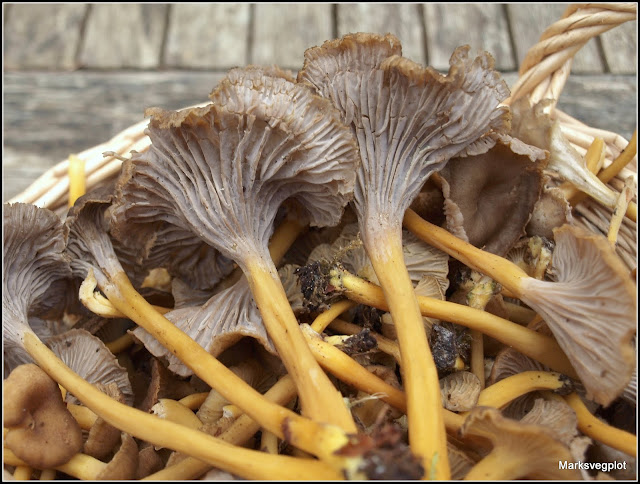 I only know of one place in my vicinity where these grow, but last year it yielded a good crop. I got several basketsful like this! 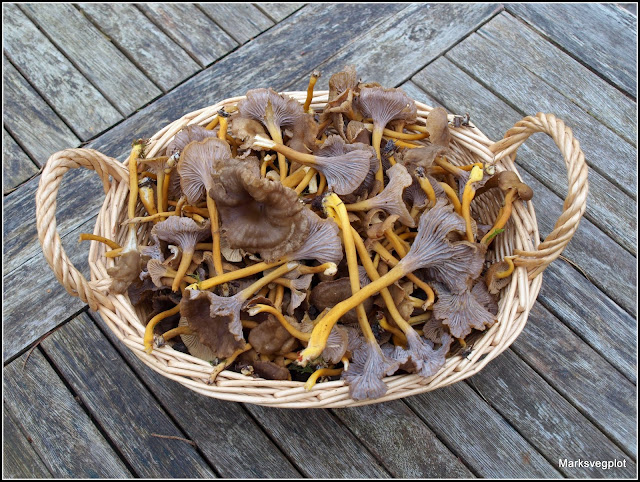 This mushroom is in my opinion under-rated. It may not be as succulent as the "true" Chanterelle (for instance its stems can be a bit tough), but it has a much stronger taste - which fortunately is very pleasant. Incidentally, Winter Chanterelles can be dried very successfully in a dehydrator or cool oven, and when dry will keep for ages. Dried mushrooms are a very convenient ingredient, because then can be reconstituted quickly and easily by immersing them in hot water. And of course they are there when you need them, and you don't have to rely on being able to forage them.

The typical habitat of the Winter Chanterelle is a well-drained slope, under conifer trees and amongst bracken and brambles. 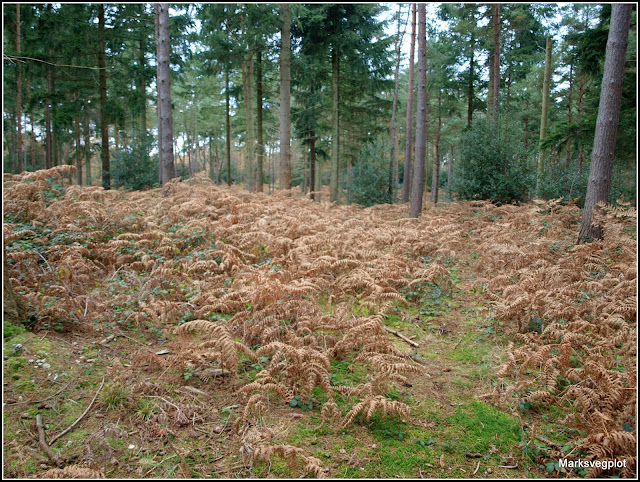 Their irregular brown caps make them hard to spot! 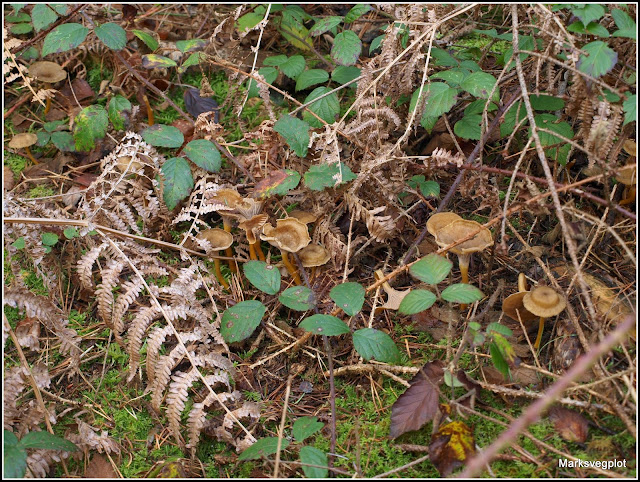 I want to show you a photo of young Winter Chanterelles, because usually you only see ones of mature specimens, and they are quite different. 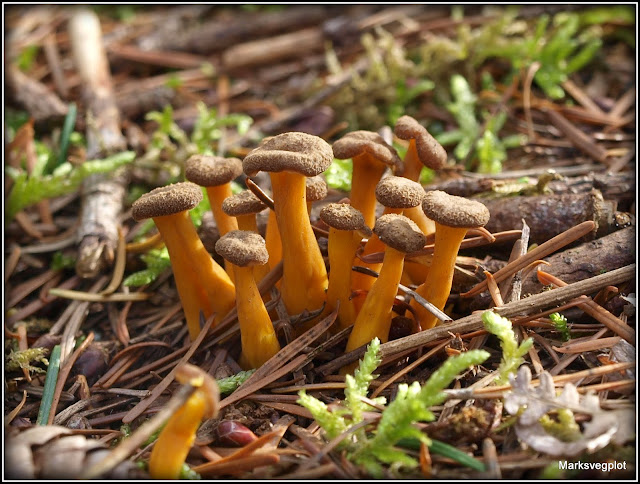 While I'm on the subject of Chanterelles, I also want to cover the False Chanterelle, Hygrophoropsis aurantiaca. As a reasonably experienced fungi enthusiast, I am now aware that this is VERY different to the "real" Chanterelle, but I still remember when I first found them and thought I had struck lucky, only to be disappointed when I carried out my ID tests! 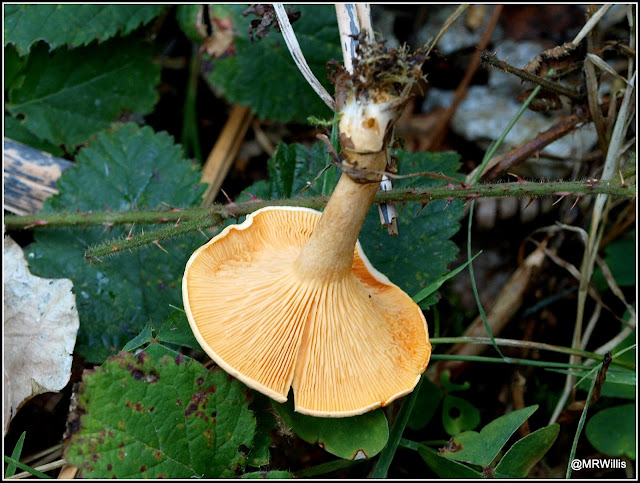 The orangey-apricot colour of the False Chanterelle is very different to the lemony egg-yolk yellow of the real one. It has real, straight, crowded gills, unlike the wriggly multi-branched veins of Cantharellus cibarius. Furthermore, the stipe (stem) is broadly concolorous with the cap, whereas the stipe of the true Chanterelle is much paler than its cap as well as being white on the inside. Lastly, the cap of the False Chanterelle tends to be much less wavy, and it has a distinctly inrolled margin (seen very clearly in the photo above). 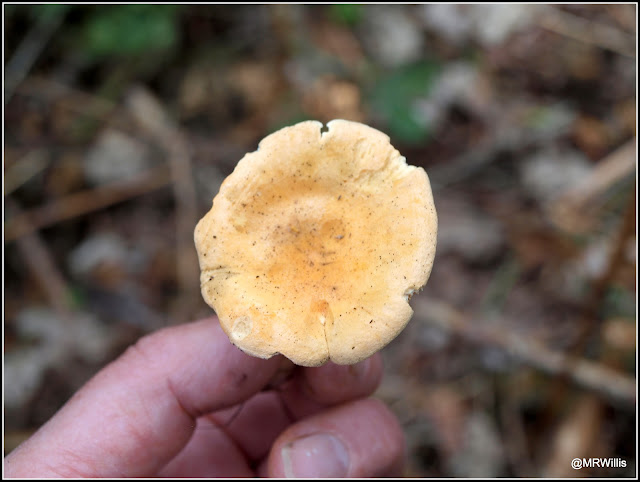 The False Chanterelle is not poisonous as such - some say eating it causes hallucinations - but it is generally treated as inedible, and it is in no way comparable with the True Chanterelle, which is a pity since it is a lot more common! 2018 has seen the False Chanterelle appear in huge numbers around my part of the world, and I know from interaction with other fungi enthusiasts that it has been the same throughout most of the UK.

I hope you have enjoyed this post, and that it will help you to distinguish confidently between the three types I have described.
Posted by Mark Willis at 17:00