Carrots out and Endives in

Until recently, one of my five big raised beds has been occupied entirely by carrots, growing away unobtrusively under their protective covering of Enviromesh. From time to time I have swiftly ducked under the mesh to collect a few roots for the kitchen, harvesting them in small batches as required. Gradually the rows of carrots have receded, freeing up some space - and as you know, free space is a rarity in my small garden, so I've been itching to fill it. Besides, I judge that the Carrot Root Fly season must have finished and the mesh can come off. With cold, wet weather surely not far off, I'm aware though that the slugs may move in on the remaining carrots, so I'm going have a concerted push to use them up. 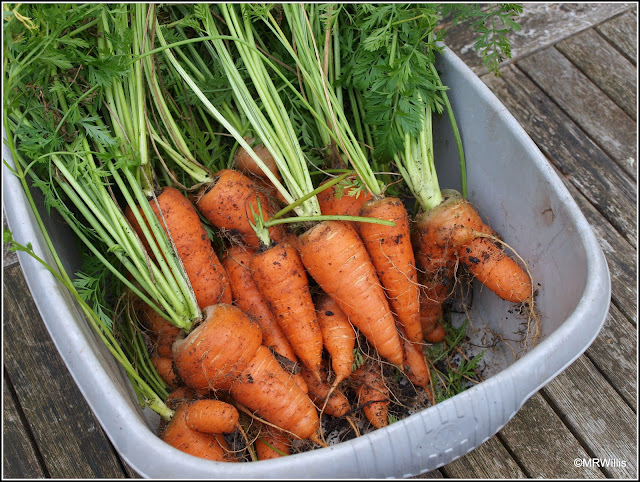 These are "Autumn King", a very fine maincrop variety that has been around for a long time. Mostly, they are nice straight roots, though there are always a few weirdos! 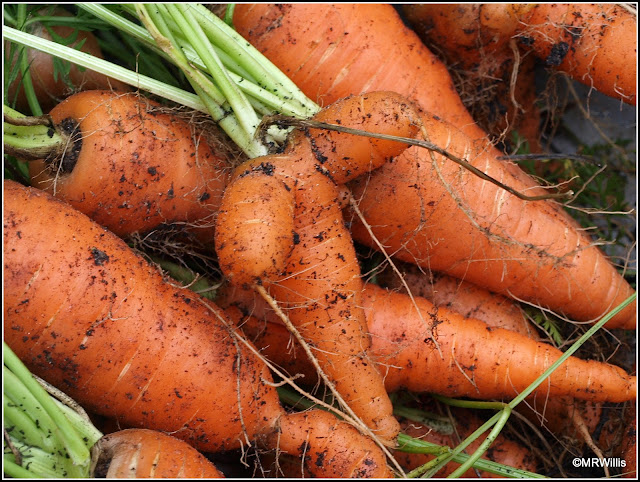 Freshly-dug carrots like these keep for ages in the fridge if they get the chance, and if you have the fridge-space it's very convenient to have a bag of them there ready - saves rushing out to the garden to furtle around in the soil (probably in the dark and the rain) when you realise you need some carrots for a dish you're cooking!

While I was harvesting those carrots, I found this opportunistic little tomato plant nestled in amongst the carrot leaves. It must be from a seed that came in with the home-made compost. I don't expect the fruits will ripen, but you never know... 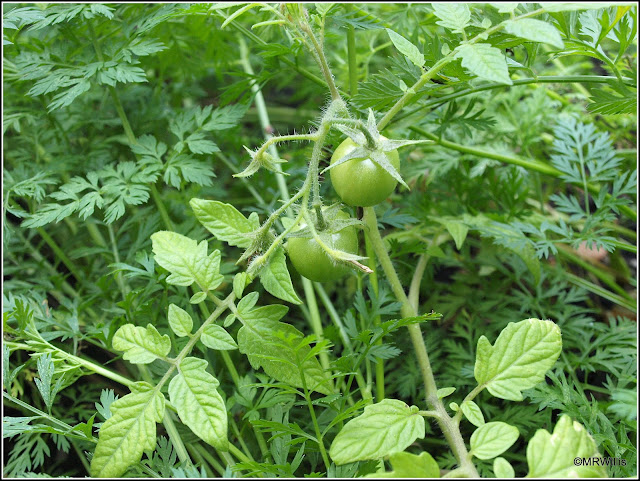 I filled the space vacated by the carrots with a load of Endives. For a reason I have forgotten, I was a bit late sowing my Endives this year (it was 6th August, a full month later then usual), so the plants are still quite small. 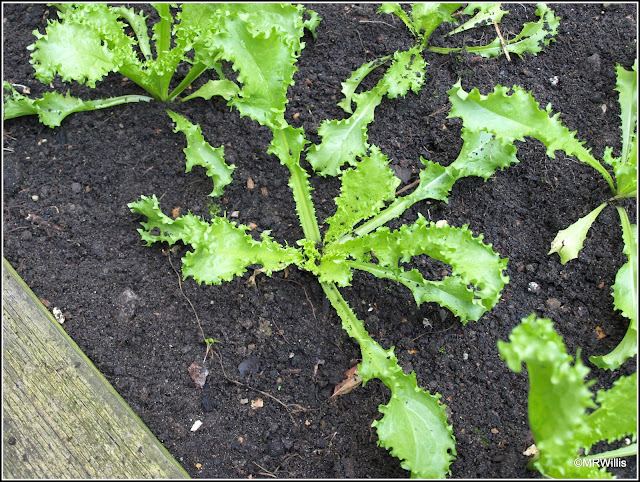 The other day I put a few of these into some of the pots that had formerly held big tomato plants, and covered them with plastic bell-cloches, effectively making each one into a mini-greenhouse. 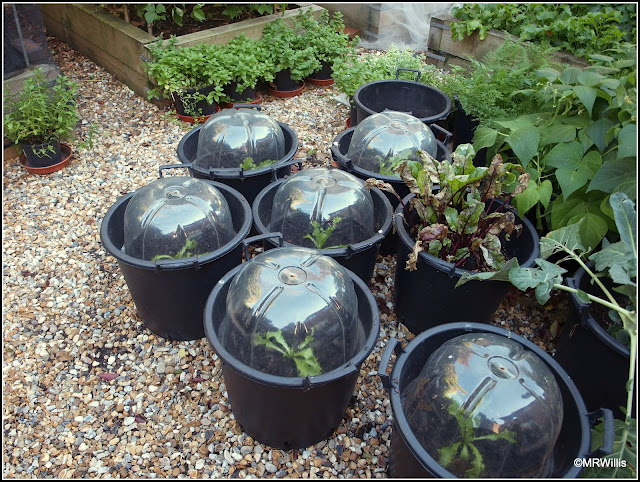 Endives will survive a light frost, but not a severe one, so this was a sort of insurance policy. I reckoned that if I took as many precautions as possible as early as possible, then we wouldn't get a frost until about Christmas time!

Most of the Endives have gone in where the carrots used to be. 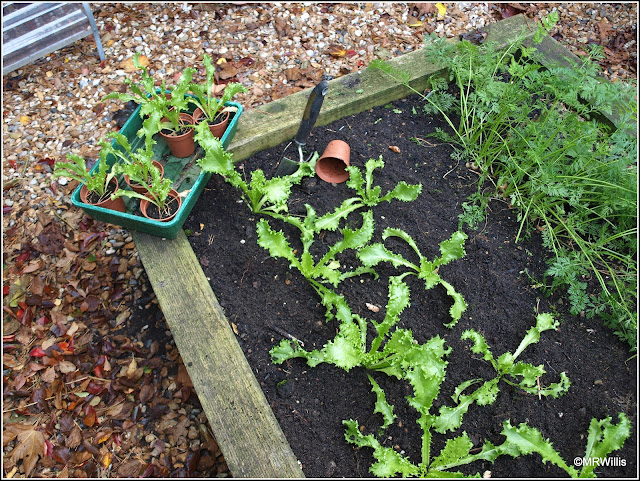 They are a mix of many different varieties, so I have no idea which is which. One or two of them appear to be broad-leaved types, which is odd because I thought they were all curly-leaf types. 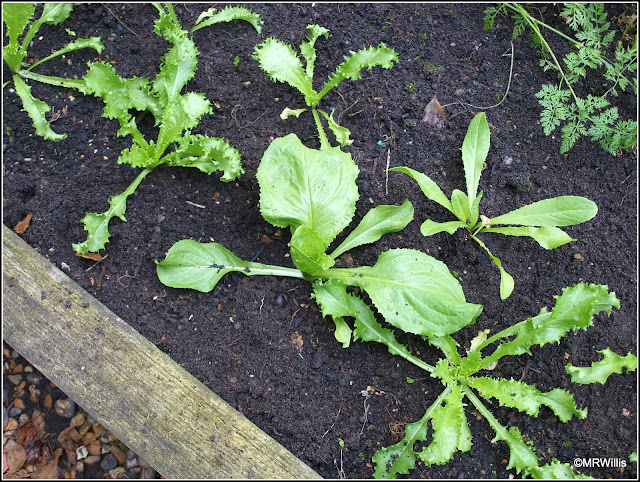 I have planted them fairly close to each other, because I don't expect them to get very big, having been sown so late. 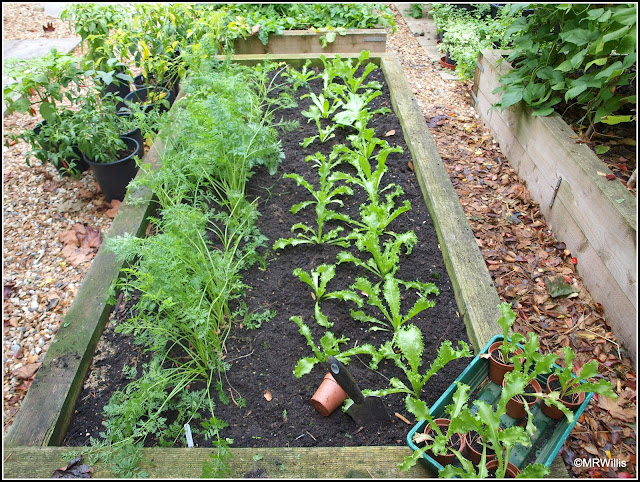 I have protected them too, using a couple of my Longrow tunnel cloches. 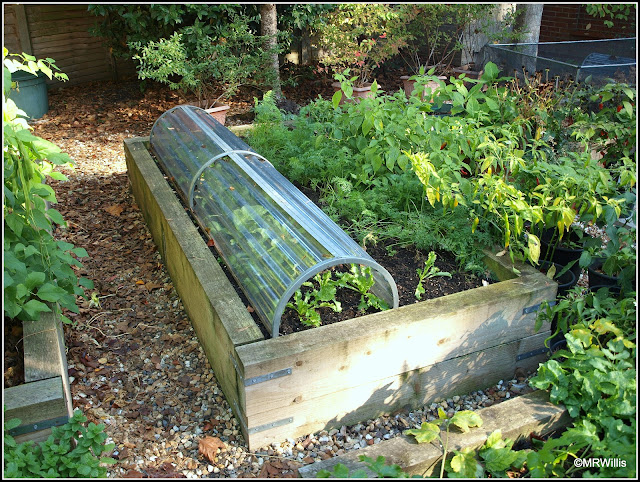 Let's hope they will have enough time to reach a harvestable size before the cold kills them off!