This is the best time of year for planting garlic. Old gardening lore says that you should plant it on the shortest day of the year and harvest it on the longest, but a bit of flexibility is allowed! 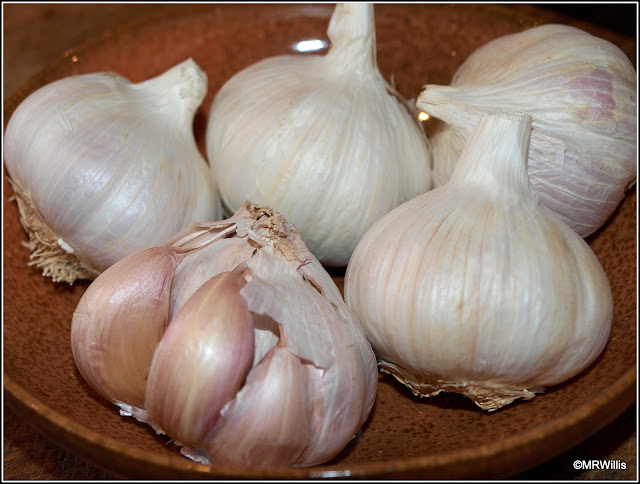 I did try once before to grow garlic in my garden, but it did not do well. There are some valid reasons for this: first, I used garlic bulbs bought from a grocery store, and they had probably been treated with all sorts of nasty chemicals to extend their shelf-life. Second, I planted it in one of my raised beds, surrounded by other plants, so it didn't get enough light. Third, I probably didn't water it well enough. Fourth, I planted in the Spring, and Spring-sown garlic is always less productive than Autumn-planted stuff. My harvest was predictably small!

Anyway, this year I'm having another go, inspired by the success of my onions and shallots up at my Courtmoor Avenue plot. Fortunately I have not even needed to buy any garlic bulbs, because there were a couple included with the big batch of seeds for review recently sent to me by Gerry from GrowSeed.


Incidentally I have trialled some of the seeds from Grow Seed before, and they have been excellent. Good value too: you can currently get a pack of approx. 1000 "Autumn King" carrot seeds for just 19p (to be fair this is an end-of-season reduction. They are normally 99p, but even that is a great price when you compare it to the offerings from some of the major seed-merchants.)

The garlic bulbs Gerry sent me are of the variety "Mikulov Wight", bred originally from bulbs grown by the Jewish community in the Moravian town of Mikulov. It is a hardneck variety, and has deep purple coloured cloves. In case you didn't know this, hardneck varieties of garlic produce hard flowering stems, whose immature flowers (called scapes) can be harvested as a vegetable in their own right. Apparently bulbs of Mikulov Wight garlic typically have 6 or 7 cloves each, but when I broke down my two they produced a total of 19 cloves. 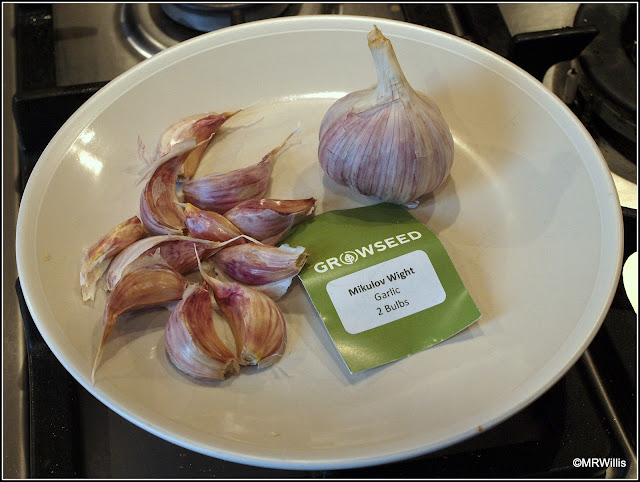 In view of my previous mistakes with growing garlic, I decided to grow mine in containers this time, so that I will be able to move them around the garden to maximise the amount of sunlight the plants receive. I'm using black plastic containers which measure 35 x 25 x 20cm [the 20 is Depth]. I think a depth of at least 15cm would be necessary, because garlic can develop a pretty substantial root system. 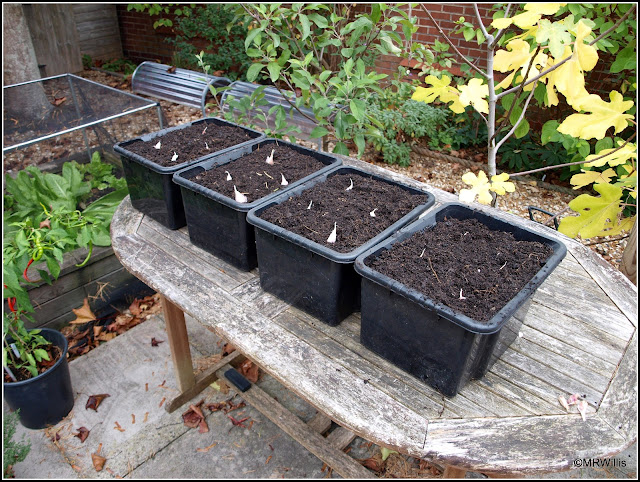 My containers were filled with a mixture of garden soil and home-made compost. Later on I will probably give this growing-medium a boost by adding some granulated general fertiliser such as Growmore.

With 19 cloves available, I planted 5 each in 3 of the containers, and chose the biggest four cloves for the fourth container. Having decided on the positioning, planting is easy - just push the cloves into the compost (root end downwards, pointy end upwards!) so that they are just submerged - in other words, not too deep. This next photo is staged - after taking it I pushed the garlic cloves further down - because a picture of bare compost wouldn't be very exciting, would it? 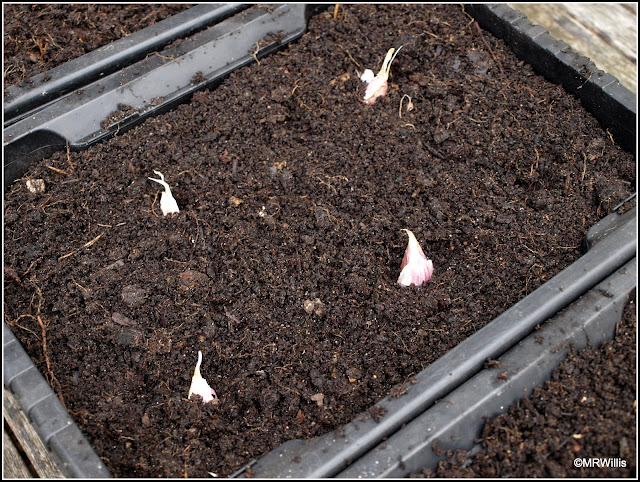 After watering-in, I have placed the containers in a sheltered spot and covered them with metal grilles to (hopefully) dissuade the foxes / badgers from disturbing them. 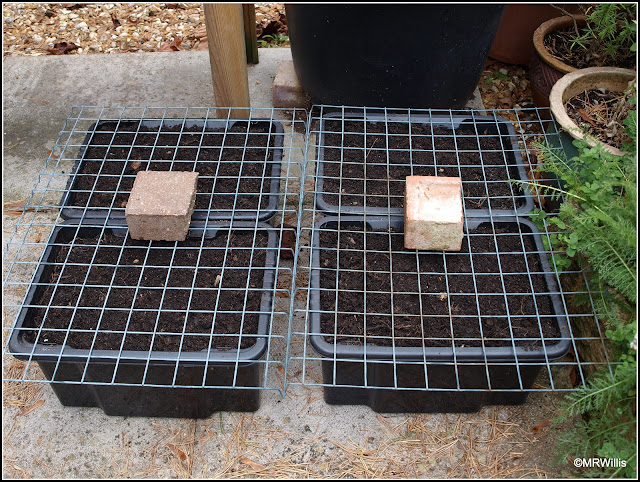 Now I just have to wait. The only attention they will need is occasional watering, and moving into the sunshine as often as possible once the plants begin to grow. If all goes to plan, I will be harvesting home-grown garlic next June / July.


Declaration: The garlic mentioned in this post was provided FOC by Growseed. All opinions expressed about it and other Growseed products are my own, and unsolicited.
Posted by Mark Willis at 11:30