Spotlight on the Cep mushroom

In the world of fungi there are some types that are considered great delicacies, and top of the list of these is surely the Boletus edulis, also known as the Cep, Porcino, King Bolete and Penny Bun. 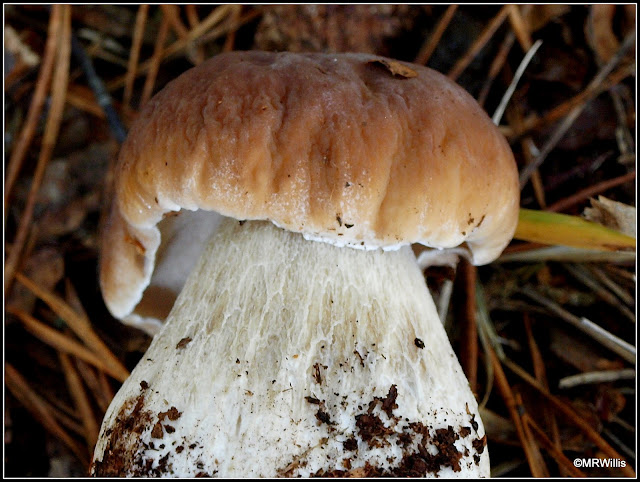 Although I'm always searching for these, I have never had great success with finding them. I see them in ones and twos, never in large numbers, though some people do (particularly those who forage in the New Forest, I hear). The Cep is an "obligately mycorrhizal" fungus: in other words it cannot grow without the help of a tree, with which it forms a mutually-beneficial relationship. For this reason it is not found on open grassland, but equally it seems to like light and is normally found at the edge of a wood or forest clearing. Ceps seem to prefer growing with Beech and Birch trees. This one was in very open mixed Birch / Oak woodland: 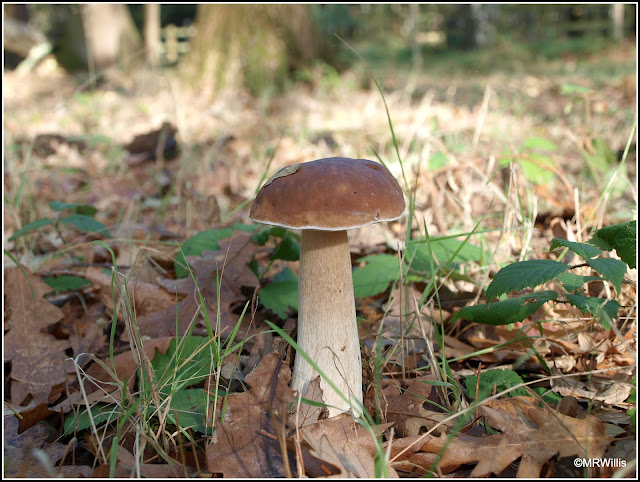 This pair was found in long grass, but only a few metres from trees: 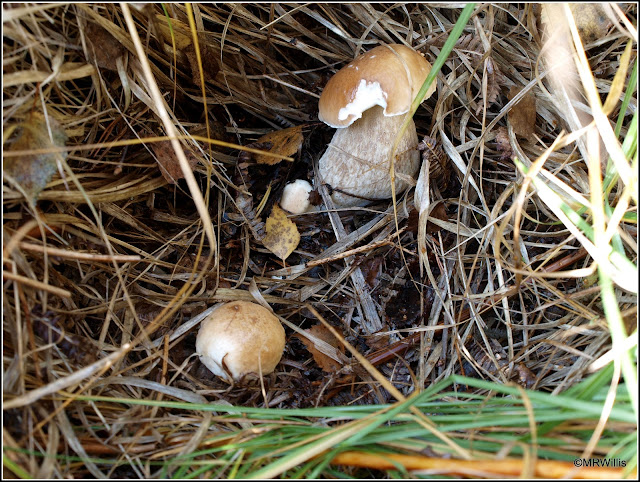 Some people have considerable difficulty with identifying Ceps and one of the reasons for this is their great variability of shape, size and colour. These ones are very pale (they are the ones shown in the previous photo too. The long grass has evidently shielded them from the light.) 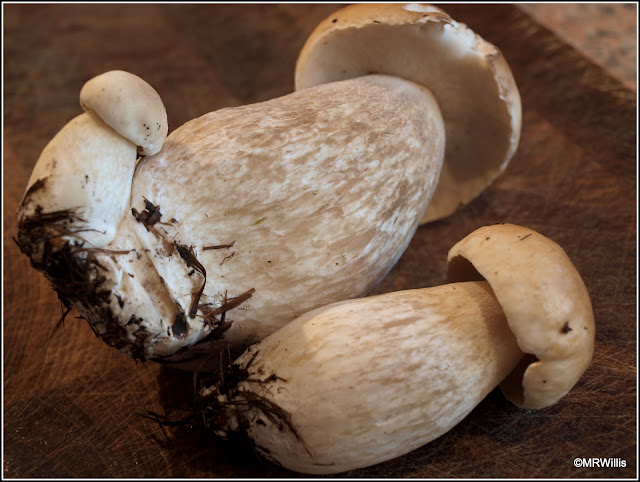 This is a close-up of the one I found in the open woodland. It's a lot darker. (and if you look back you will see that it had a much taller stipe (aka stem). 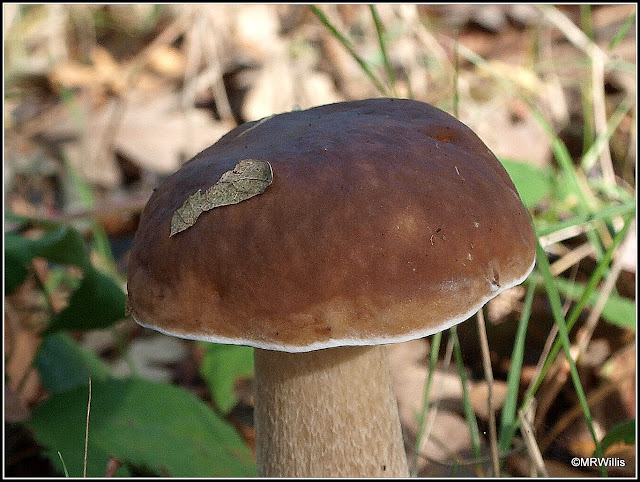 Incidentally, that photo also shows another important identification feature for the Cep. Their caps normally have a distinct white margin, which shows up very well here.

Small specimens of this mushroom are often very hard to spot, and conceal themselves well in the leaf-litter, like this one. 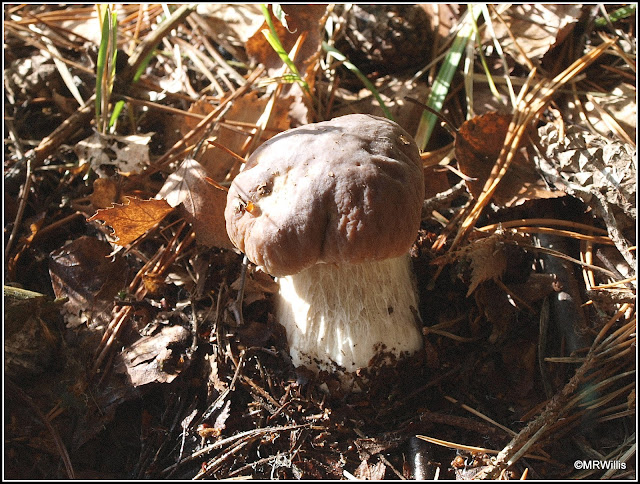 But just occasionally you get one that stands out above its surroundings. The white stem colour certainly helps with spotting them! 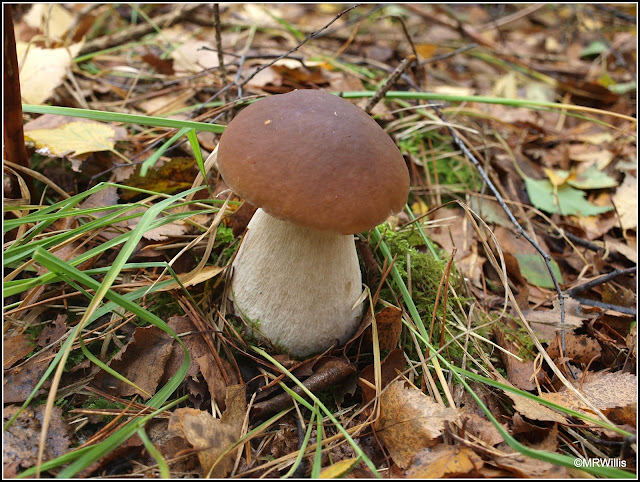 These are also Ceps, but big old ones, which were lurking underneath some heather. The one posed in front was quite big (about 15cm diameter) and the two squishy ones behind it were a lot bigger. 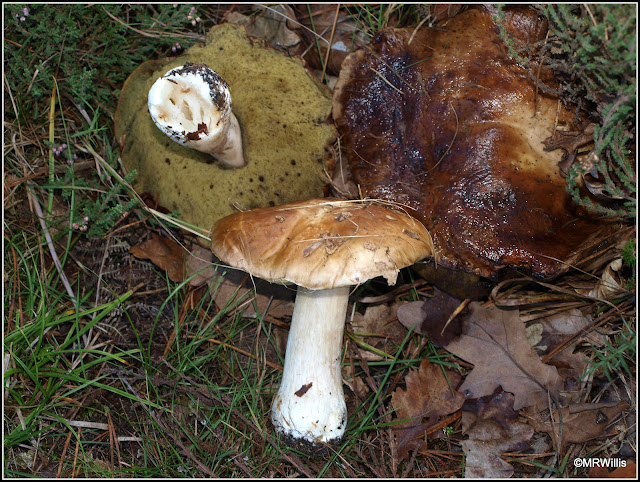 The Cep is a bolete type of mushroom, and boletes have pores underneath their caps, not gills. For clarity, this is an example of a fungus with gills (in this case a Brown Rollrim, Paxillus involutus). 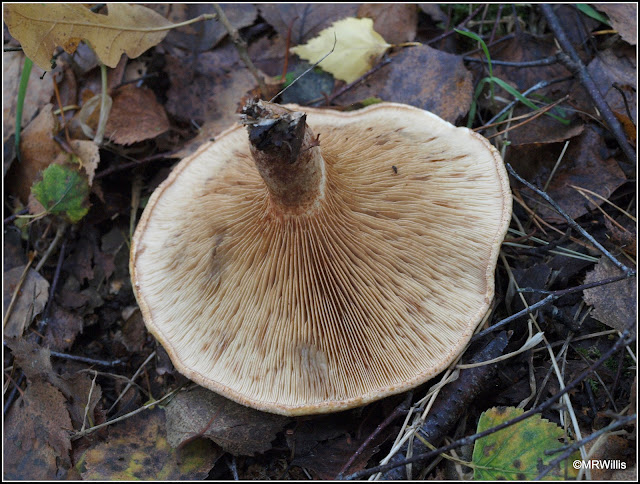 This photo shows the underside of a Cep, with pores, which form a spongy layer beneath the main flesh of the cap. They are white when young. 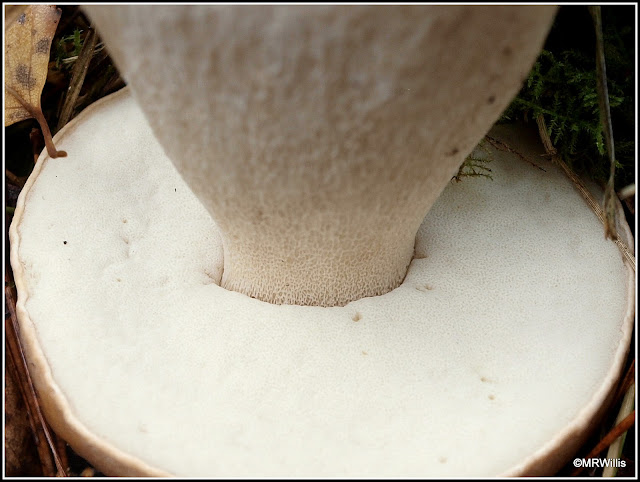 When they are old, the pores turn yellow and eventually a sort of muddy green. 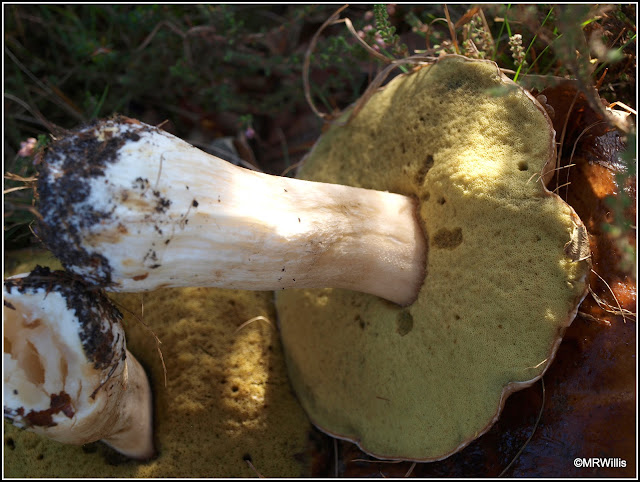 Another major identification feature for the Cep is the net-like pattern of lines on its stipe (or stem), referred to as "reticulation". These are usually most apparent at the top of the stipe, just below the cap, as shown here. 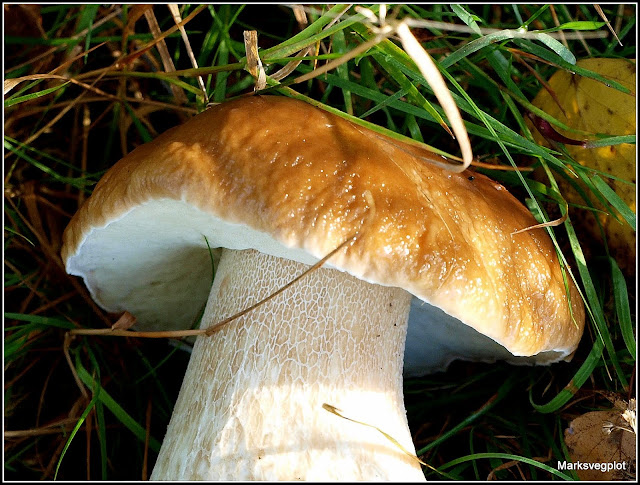 Incidentally, stem/stipe shape is definitely NOT a good identification point. Some are tall and comparatively thin; some are very short and fat; and some are pear-shaped like this one! 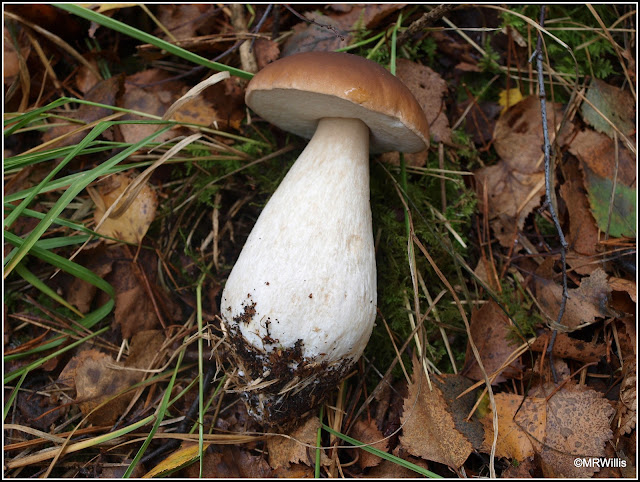 Since this mushroom is clearly a choice edible, I must say something about cooking it. Because of its relative rarity in our area, we tend to consider this type a special treat. Other mushrooms get "lumped together" with different types in our recipes, but we usually keep the Ceps separate. Our favourite way to cook them is to slice them (stems as well as caps) and dry-fry them over a medium heat for a few minutes, until they go golden brown at the edges, then add a knob of butter just before serving. Done like this they are great with scrambled eggs! Most mushrooms release a fair bit of moisture when they are heated, so it's best not to add any oil, butter or liquid until they are nearly fully cooked. To be perfectly honest, I think a fresh Cep is quite mildly flavoured, so I have recently started drying some, which will hopefully concentrate the flavour. Dehydrated mushrooms keep for ages and don't take up a lot of room, so this is a great way to preserve them for later use if you find yourself with too many to eat immediately... 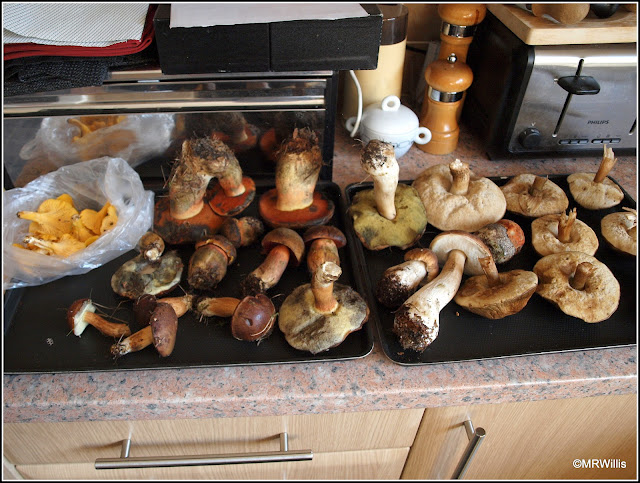 By the way, I'll be doing more of these "Mushroom spotlight" posts on my blog in the near future, because I have run out of steam with writing about gardening subjects, and it is currently prime wild mushroom season.
Posted by Mark Willis at 17:00