My garden is very prone to damage by animals - cats, foxes and (apparently) badgers. To be honest, I have never seen a badger in my garden, but I know that they are common in my area and some of the major excavations seem too big to have been made by a fox. But whoever the culprits, the long and short of it is that I cannot risk leaving newly sown seeds or young plants without protection.

Over the years I have acquired an extensive armoury of "protection hardware", and most of it is deployed at present, so I thought it might be worth showing you some of it.

One of my most valuable bits of kit (not in the monetary sense), is my set of four tunnel cloches. Here you can see two of them covering my little chilli plants. On this occasion they are protecting the plants against the wind, but they have lots of other uses too. 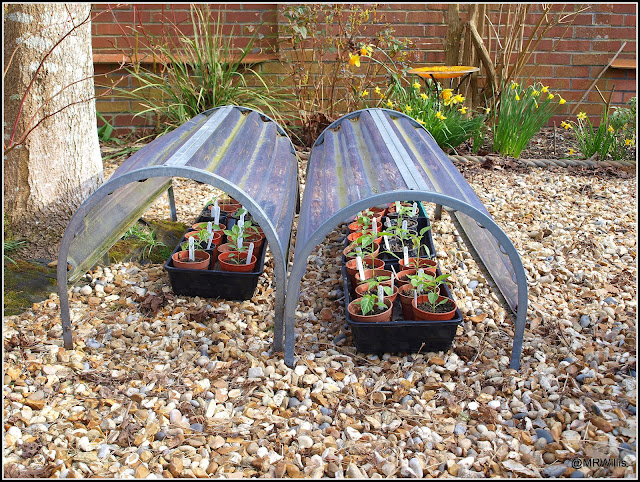 At present the other two are covering a recently-sown row of Parsnips. Another row is protected with some pegged-down plastic clematis netting. Notice also the mini-greenhouses at the left of the photo. Inside them are some potato plants in large pots. 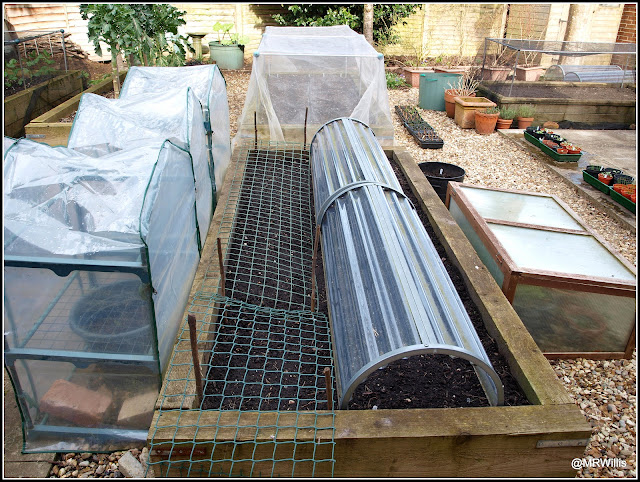 This is the raised bed in which I sowed my carrots last week. It is protected with fine mesh material, which is aimed at keeping out the Carrot Root Flies, but of course it will also deter the animals. 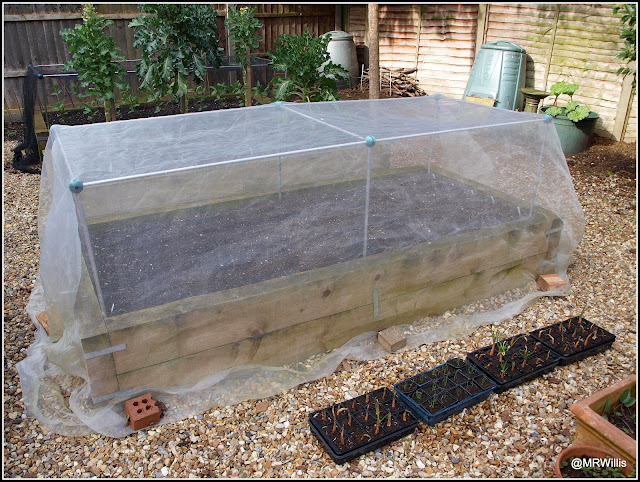 Another bed is protected with a 5mm mesh net, originally marketed as "Anti-butterfly netting". This bed, which contains 20 Broad Bean plants, is particularly vulnerable because it is on the direct path to the hole under the fence which the animals use to get into my garden. 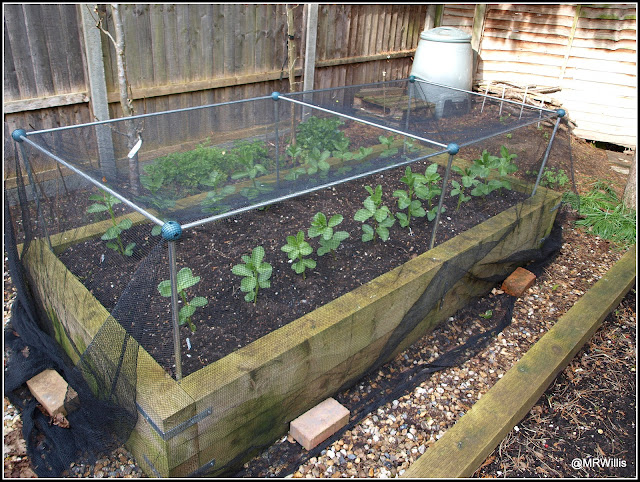 Yesterday I sowed some Radishes and Lettuces in another bed, and of course I covered them - in this case with another anti-butterfly net. There are very few butterflies about at this time of year, but I seriously doubt whether any of the local cats would be able to resist the temptation to dig in that finely raked soil! 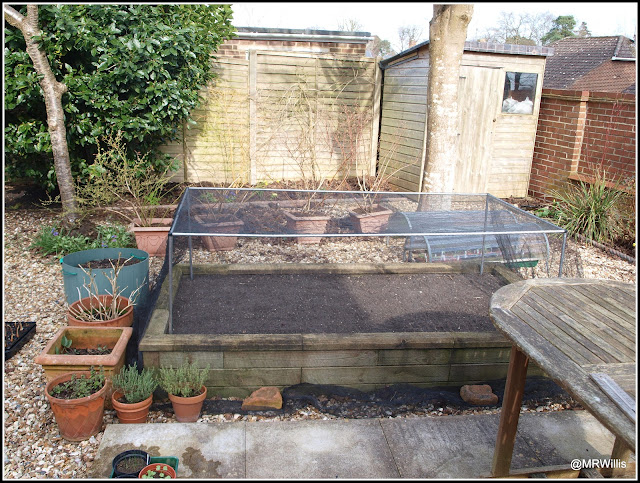 Most of the structures you see in my photos here are constructed with aluminium rods joined together with the "Build-a-Ball" system. 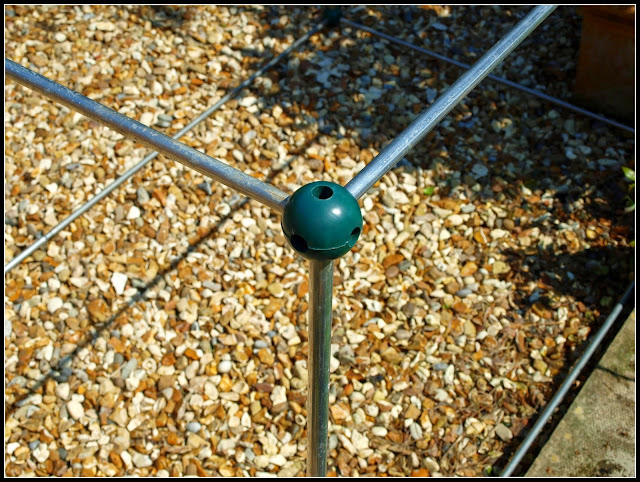 Since over the years I have built up a collection of rods of varying lengths I can build a structure of just about any height or length that I want. Most often the vertical rods are just pushed into the soil of the raised beds, but it is also perfectly possible to build a free-standing structure, like this one, which was used as a fruit-cage. 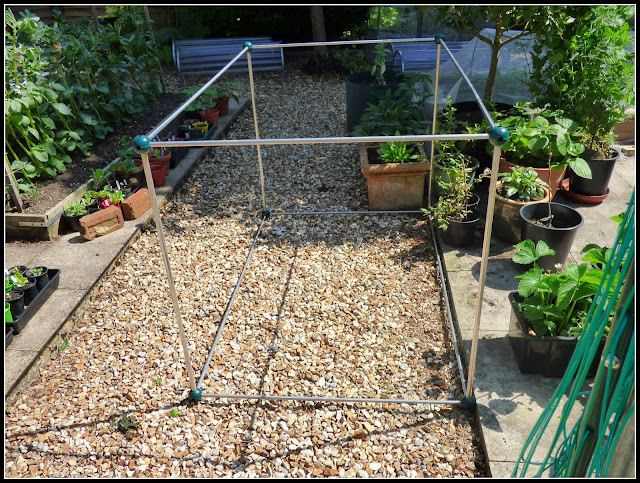 This is the final item I want to show you today - truly a weapon of last resort! 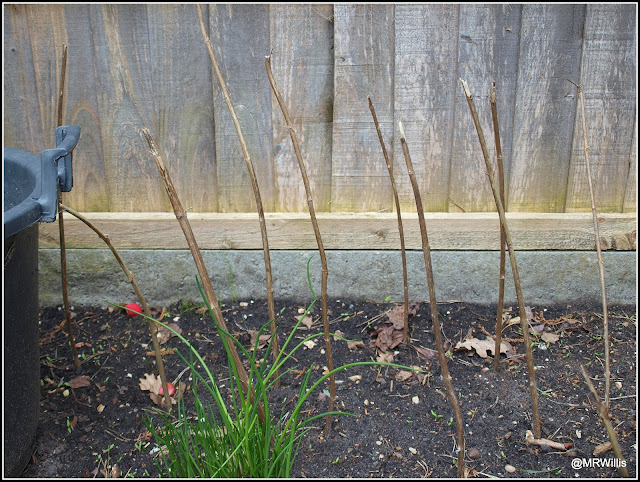 Yes, that's right, just some sticks (in this case prunings from a Buddleia bush). Totally unsophisticated, but surprisingly effective - at least in the case of cats: I don't think they would deter a badger...
Posted by Mark Willis at 08:00