Until this week, all the seed-sowing I have done has been at my own house / garden. Now I have finally got some seeds in at the Courtmoor Avenue plot. I have sowed a row each of Beetroot "Boltardy" and Parsnip "Thrupp", the latter a gift from a friend who is a member of the Stroud Community Seed Group. The cultivated part of the plot is gradually "outnumbering" the uncultivated bit! 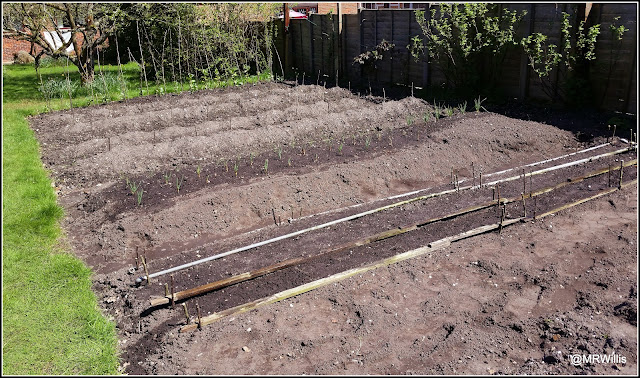 Because the plot is very open and vulnerable to damage by cats, foxes etc, I devised a novel way of delineating the seed-beds and giving them a little bit of protection. I laid down some bits of wood and metal piping which I found at the end of the garden, and pegged them in place, like this: 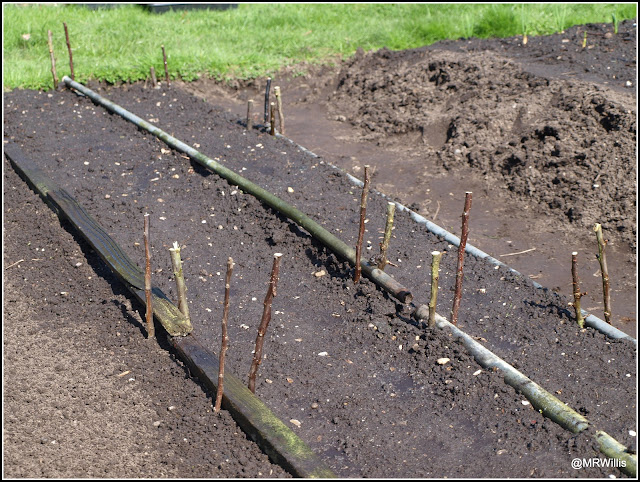 The pegs are just short lengths of stick, cut from the apple-tree prunings. 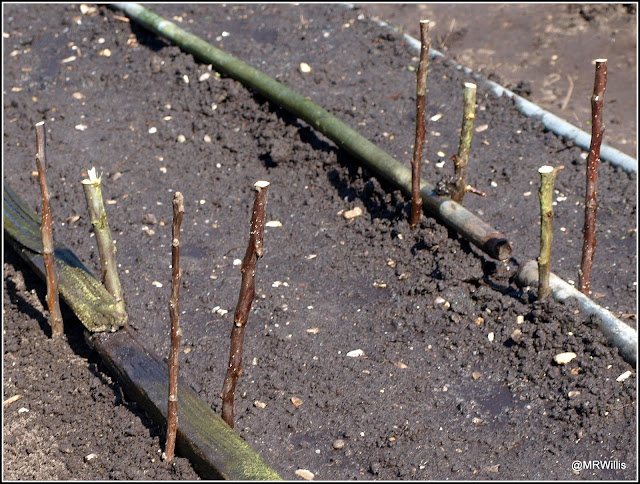 This arrangement is not intended to be a long-term one, and once the seedlings are up and established, I'll remove the wood and metal. I know it doesn't offer much protection, but hopefully the cats will prefer the more open ground elsewhere on the plot. 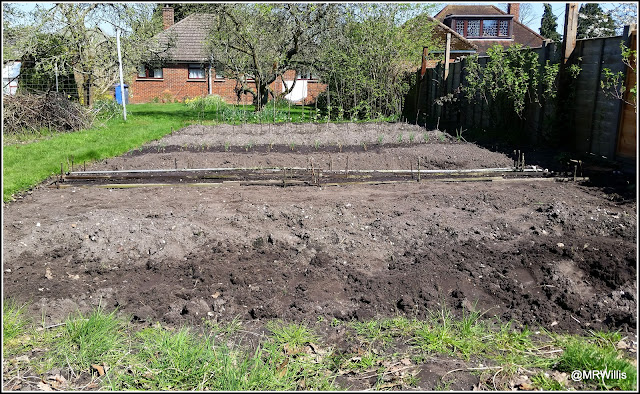 On this visit I also planted some more of the Shallots. So far 28 of the 45 have sprouted, well over my self-imposed target of 15. 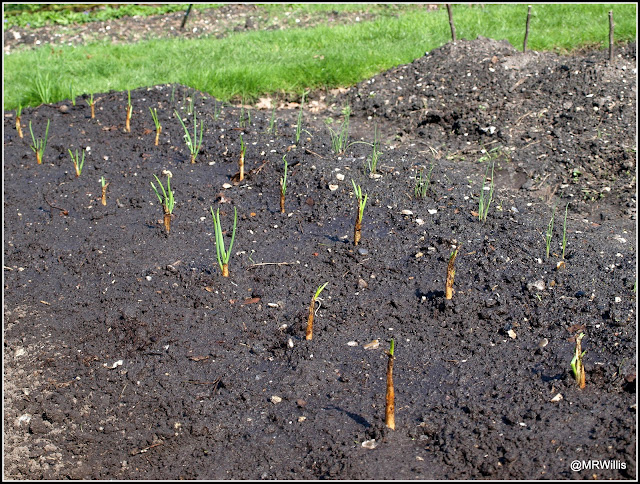 The first half-dozen Shallots, which I planted 10 days ago, look well-established now and growing strongly. 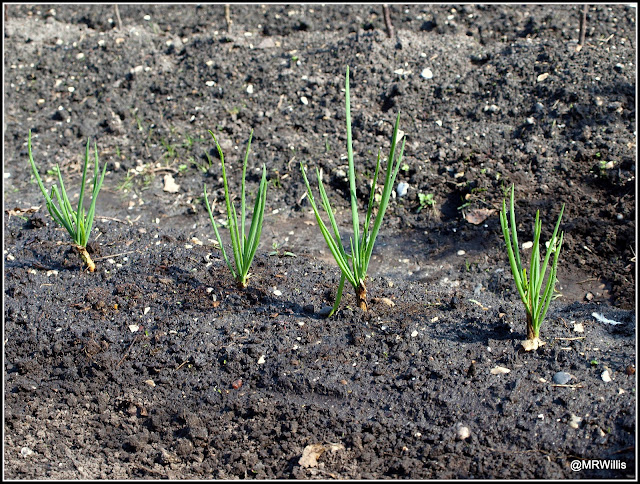 The Broad Beans haven't grown very enthusiastically yet. In fact a few of them look very pale, with one or two of their lower leaves going yellow. This sounds disturbingly like a nutrient deficiency in the soil, but maybe I'm worrying too much. It might just be that they have been pining for some warmth and sunshine (some of which finally arrived this week). 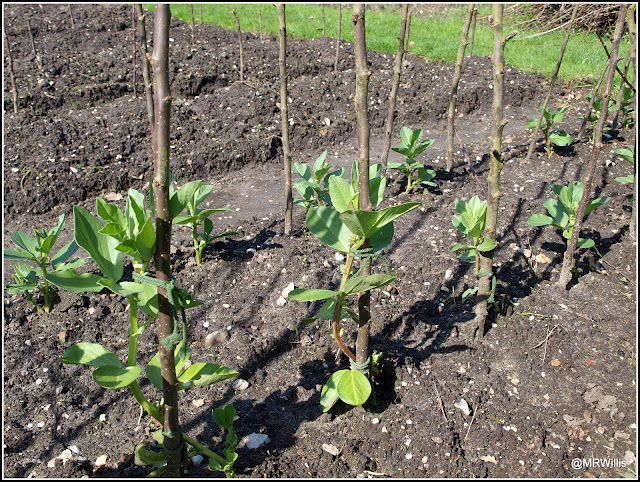 The first few potato shoots are poking up through the soil now. These are the First Early variety "Foremost". 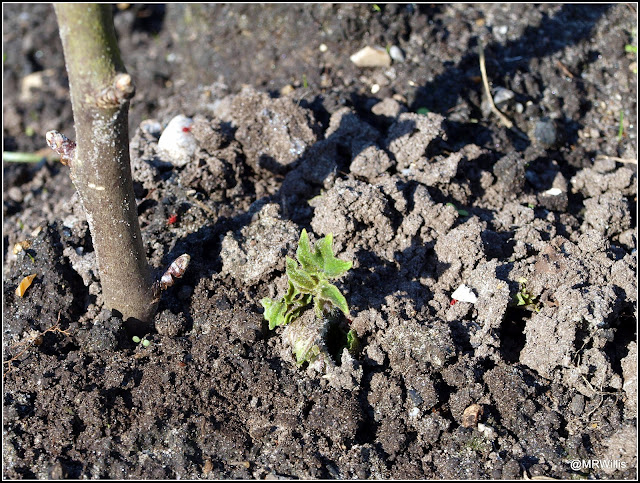 I'm hoping that we have had our last frost of the year now, and that I won't have to dash up to the plot one evening to cover over these tender shoots. Our weather is all over the place these days, and you never know what to expect! This week we have had daytime temperatures in the mid 20s, and night-time ones in double figures a couple of times too.

The Raspberry plants at the top of the plot are covered in delicate green new leaves too. I evidently did their pruning / weeding just in time. It's depressing to see that despite my efforts, there are still plenty of weeds coming up in amongst the canes. 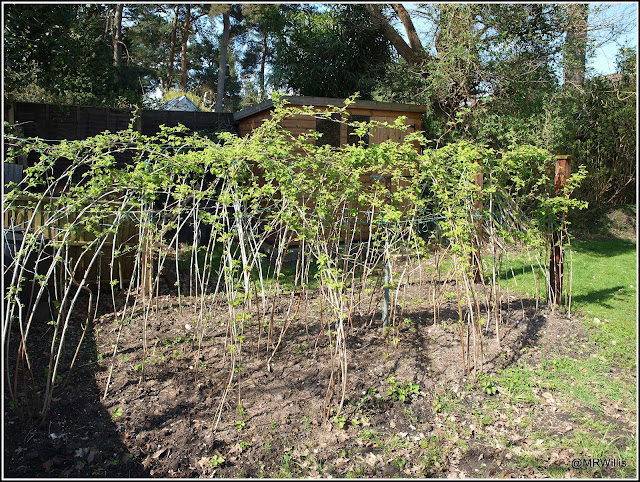 A month or so ago, when the plot was completely bare, it seemed huge, but now as I begin to populate it I'm beginning to think I may not have room for all the things I want to grow! Must remember to leave room for the Winter veg as well as the Summer ones...
Posted by Mark Willis at 12:00