I think (I hope) the risk of frost has passed now, so I have potted up my tomato plants. Tomato plants are very "tender" and are easily damaged by frost. I expect a few people lost theirs when we had that severe frost 10 days ago. I always grow my tomatoes in pots, so theoretically it is possible to bring them under cover if frost is expected - I did once put all mine in the garage for a couple of nights, but it was a big pfaff! It wasn't easy either, because each pot has a tall bamboo cane in it. It's definitely better to wait until night-time temperatures are in double figures, if you have the patience.

I don't have that amount of patience, but the weather forecast for the next 10 days shows nothing below 8C, so I'm taking a chance on it. In an emergency, I could always drape them in fleece...


I have potted-up 12 plants of 11 different varieties, in my big Stewart self-watering pots (officially called "balconnieres"). The variety of which I have 2 is "Ferline", one of my favourites, a reliable cropper with an above-average blight resistance.

This year I am using (with some trepidation, given my experiences with contaminated compost in the past) Levington's Original Multi-Purpose compost, with some added Growmore and pelleted chicken manure. My reasoning is that it is probably as good as any - it's really a matter of luck. Even the well-known brands are not immune from weedkiller contamination, although they are most reluctant to admit it. The texture of the Levington's stuff seems pretty good, and it doesn't have any big lumps of wood, plastic or whatever in it. 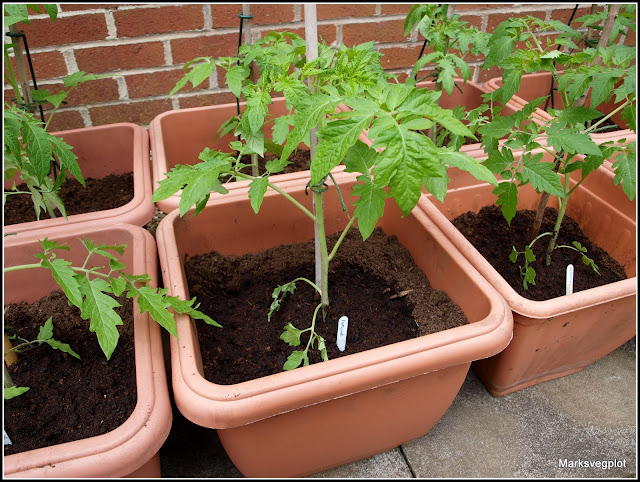 One of my plants is a lot smaller than the others. This is "Vintage Wine", a potato-leaved variety. It has big pink fruits with golden-yellow stripes. I imagine it to be rather like a bigger version of the well-known "Tigerella". I'm hoping that nothing is amiss, and that it will eventually catch up with the others. 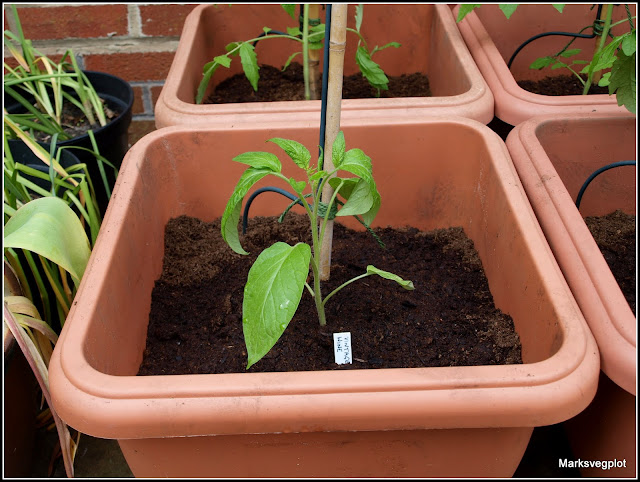 As well as the plants in the big containers, which are mostly indeterminate (cordon -grown) ones, I have put four "Maskotka" plants into the tall wooden planter in which I normally grow baby carrots. This planter normally lives under the kitchen window, at the front of our house, but I have moved it onto the patio, round at the back. 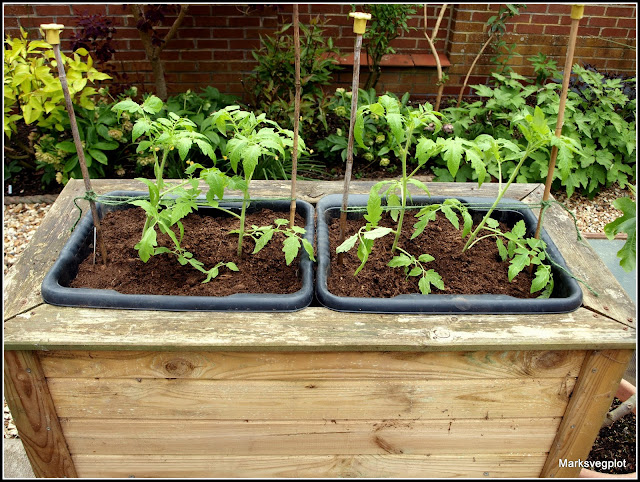 The idea is that the plants will trail downwards, but still remain mostly off the ground so less easily accessed by slugs. "Maskotka" is one of my all-time favourite tomato varieties, which I grow every year. It produces masses of small red fruits, larger than the traditional cherry types, but smaller than the so-called Salad tomatoes. It's the one most favoured by our grandchildren too.

Following my usual practice, I have a complete set of spare plants, just in case of casualties or "frost-induced disasters". 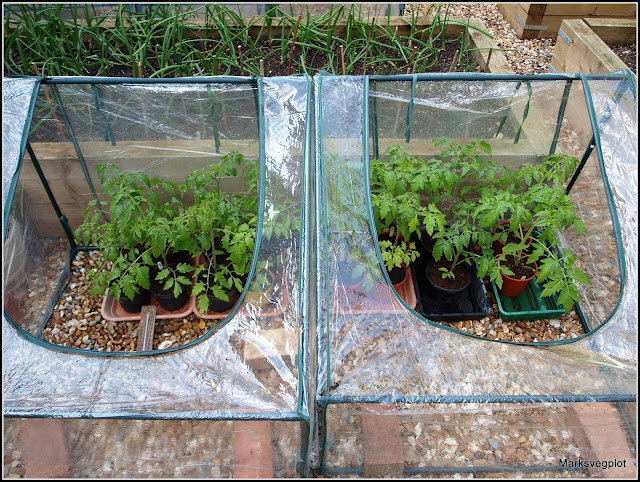 I will keep these in their current 5-inch pots for another couple of weeks, and if I don't need them I will give them away. Kept in the small pots they will be easier to protect if necessary.
Posted by Mark Willis at 12:30