As many readers know, I am always on the lookout for free food when I'm out walking, and have recently become very interested in fungi - especially the edible types! Well, this week I have found two patches of what I think are St.George's Mushrooms - Calocybe gambosa: 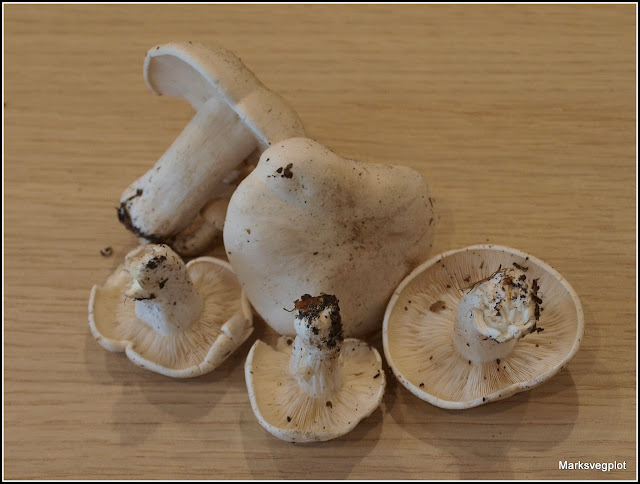 The St.George's Mushroom is so-called because it typically appears on or about St.George's Day (23rd April). As such, it is one of the earliest edible fungi to appear. One of its identification factors is that it is generally not found after the end of May, so if in August you spot something you think is a St.George's Mushroom, then it almost certainly isn't one.


I have got several books on fungi now, and I have consulted them all, as well as several websites. I think this is only sensible, especially since I am still a novice in this area. All the authorities agree that one of the chief identification factors for this mushroom is its distinctive and strong smell, often described as "mealy" (like wet flour). One book I have says that the smell is somewhere between melon rind and bonemeal. (Of course as a gardener these smells should be well-known to me!)

I have also been studying the arcane subject of gill attachment - the way the gills on the underside of a mushroom attach to the stipe or stalk - which is one of the many factors that can be used to identify a fungus. I spent ages yesterday studying the fungi I had collected, but today I realised that the best way to do it is to take a photograph which than then be blown up to 200 or even 300%, which makes things a lot easier. Doh! 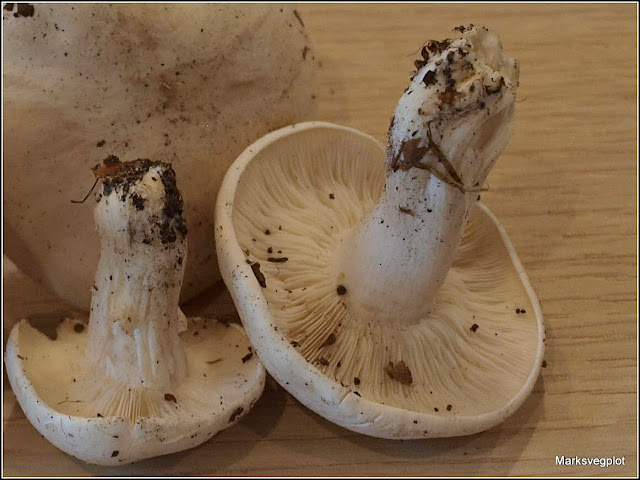 The books say that the some of the features to look for in a St.George's mushroom are:-


1. A cap that is initially round, becoming irregular when bigger
2. A cap that is slightly inrolled at the edge
3. A stem that is stout and bulbous at the base. The Latin name for the St.George is Calocybe gambosa and "gambosa" means "club-footed".
4. Flesh is firm and cream-coloured and does not change colour when cut
5. Gills that are cream, very crowded and "emarginate" (see link to gill attachment above)
6. A white spore-print. This one is important because one of the fungi which can possibly be confused with the St.George is the Livid Pinkgill, Entoloma sinuatum, which has pink spores.
7. Then there is the smell, which I can't demonstrate here!


Anyway, the long and short of it is that my foraged fungi pass all the above tests, so they are now going "in the pot".


In his book "Edible Mushrooms", Geoff Dann describes the taste like this: "Some people find the taste too much, but this mushroom is rightly regarded as a delicacy. They are best sautéed and traditionally served with offal or strongly flavoured fish, but are also lovely with chicken, on brown toast, or in a risotto with asparagus. They go well with another foraged spring favourite - wild garlic or ramsons..."


Finally for today, a little plug for a website that I think is pretty good. If you're a keen but novice fungi-forager like me, this will be a very valuable resource! Galloway Wild Foods.
Posted by Mark Willis at 12:30