Even with a small garden like mine, unless you plan what you are going to grow, and sow accordingly, it is likely that you will end up with shortages or gluts. Jane and I are not particularly keen on freezing vegetables (we much prefer eating them fresh), so I try hard to make sure that I grow the right amount of each.

This year I have two rows (each of 12) of Broad Bean plants, sowed about a month apart. Hopefully the earlier ones will be just finishing when the later ones come to maturity. This photo shows the difference in size: 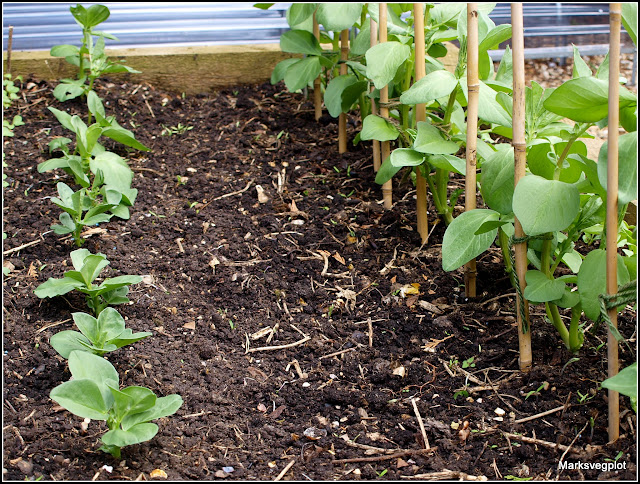 The later batch will probably catch up to a degree, since they have not had to cope with any really cold conditions, as the first batch did. The fact that the beans are of two different types will also help with achieving different harvest times. 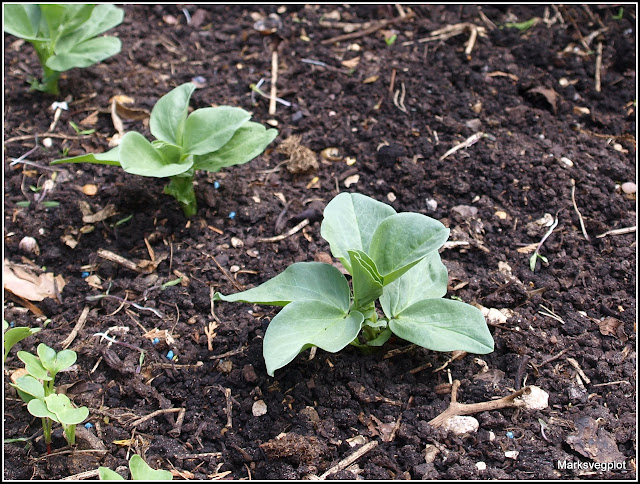 In retrospect I wish I had sown the beans differently - with the later beans on the right, not the left. The reason I say this is that most of the direct sunshine these beans receive comes from the direction which is to the right in these photos, so therefore the taller beans may end up overshadowing the shorter ones. I didn't think of this until it was too late. It probably won't be a major issue, but it's just one more factor to think about when deciding what to plant where. 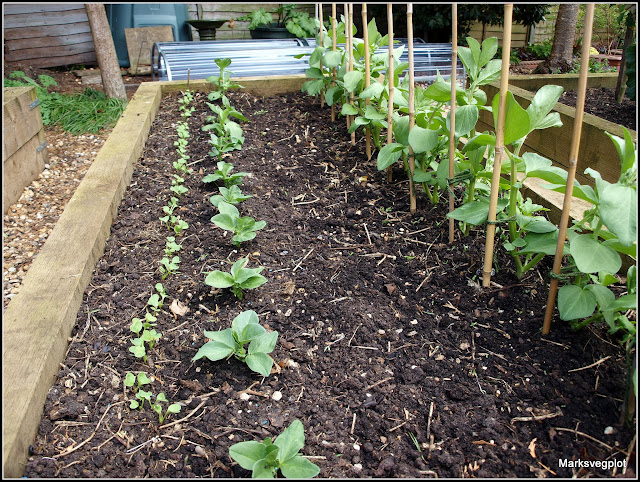 As you can see, I sowed a row of Radishes alongside each row of beans, on the outer side. Last year in similar circumstances I sowed a third row of Radishes too, between the rows of beans, and they failed dismally due to lack of light. Lesson learned!

Failure to sow vegetables at the correct spacing, or failure to thin them sufficiently after germination is another very common cause of poor crop performance. Seen below are some newly-germinated Beetroot seedlings, which look nice and evenly spaced. This is because the Beetroot seeds were big enough for me to have been able to sow them individually, in exactly the right place. 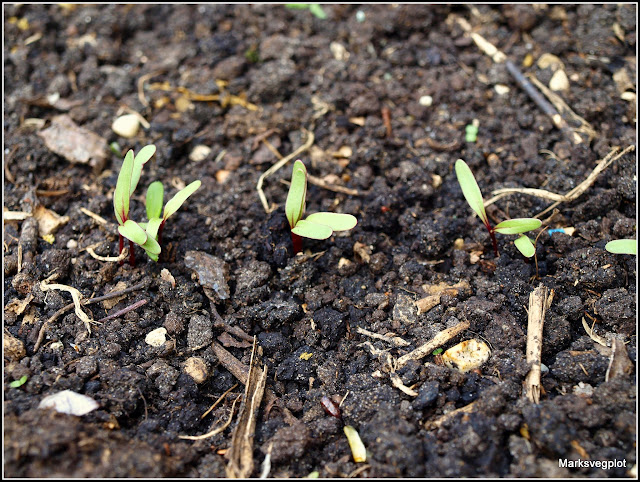 However, it's not as simple as that. Each Beetroot "seed" is actually a cluster of several seeds, and they often all germinate. The cluster on the left in the photo below has at least 4 plants in it - three of which need to be removed if I am going to get decent-sized Beetroot. Notice that the cluster on the right has an impostor too - a stray Tomato seed, presumably one that came from my home-made compost. 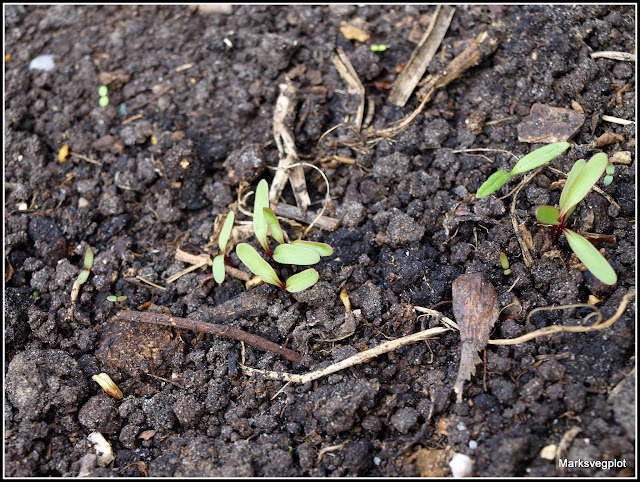 A couple of tips on thinning:

1. Water the row of seedlings half an hour before you start. This will enable you to remove the surplus seedlings with minimal root-disturbance of the ones that are to remain.
2. Place a finger on the surface of the soil close to the clump of seedlings, in order to help stop too much soil coming up as you pull.
3. Save the surplus seedlings and use them as salad ingredients.
4. Water again after thinning, to re-settle the soil around the remaining seedlings.

By the way, if you don't like thinning (or haven't the time for it), you could always use Seed-tapes, in which the seeds are pre-positioned at the correct spacing in a reel (tape) of bio-degradable material.

My next subject has nothing to do with thinning, but I suppose it is vaguely related to Successional sowing...

This year's crop of Purple Sprouting Broccoli is coming to an end. I have had a good crop over a period of several weeks, so I am well pleased. 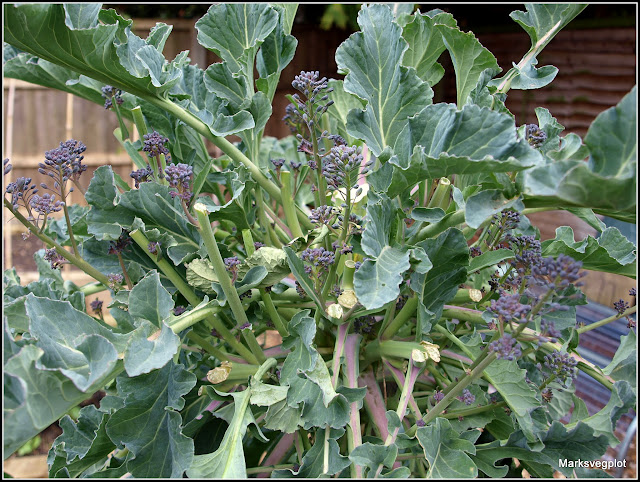 All that is left on the plants now is a mass of tiny (stringy) tertiary shoots, which are not very pleasant to eat, so I am leaving them to develop into flowers - for which the bees will no doubt be grateful. 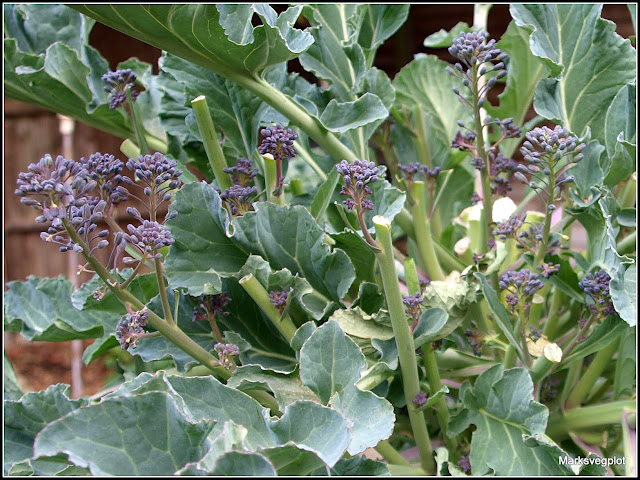 The next crop I will grow in the bed currently occupied by the PSB is Runner Beans. These beans are frost-tender and our last frost date is usually about Mid-May, so I haven't sown the beans yet. This means that I have 3 or 4 weeks grace in which to leave the PSB to flower, before it needs to be removed.

At about that time I will sow the seeds for next year's PSB. So the cycle continues...