We recently had the pleasure of dining and spending a night at The Pig at Brockenhurst, in the New Forest. 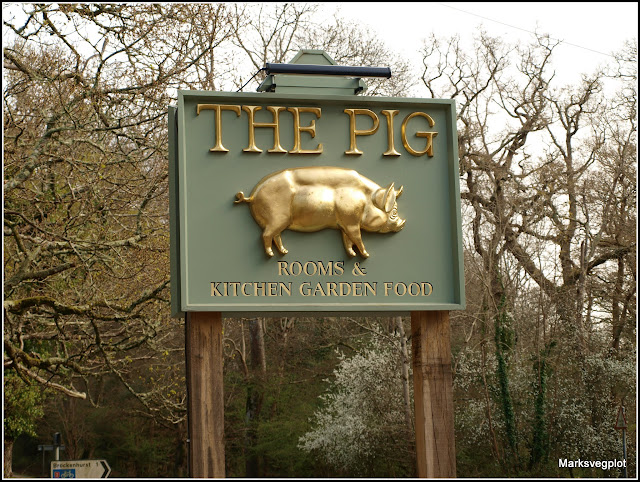 As you may gather from the words on that sign, this is a small hotel - more of a restaurant with rooms - that specialises in food emanating from two sources: the animal pig, and the vegetable garden. This is one of a number of establishments that have recently become very popular in the UK, where the gardener is considered equally as important as the chef. The chef asks the gardener to grow certain ingredients he needs in his dishes, but the gardener also puts in front of the chef some interesting ingredients that maybe he hadn't previously considered... Sounds good, eh? Oh, and by the way, more than 85% of the ingredients used in the restaurant are produced (or foraged!) within a radius of 25 miles, in other words mostly from the New Forest.


The hotel was lovely, with a friendly welcoming atmosphere. Although part of a chain (5 hotels) The Pig at Brockenhurst is small enough to offer the personal touch, and not be part of a faceless corporate juggernaut. 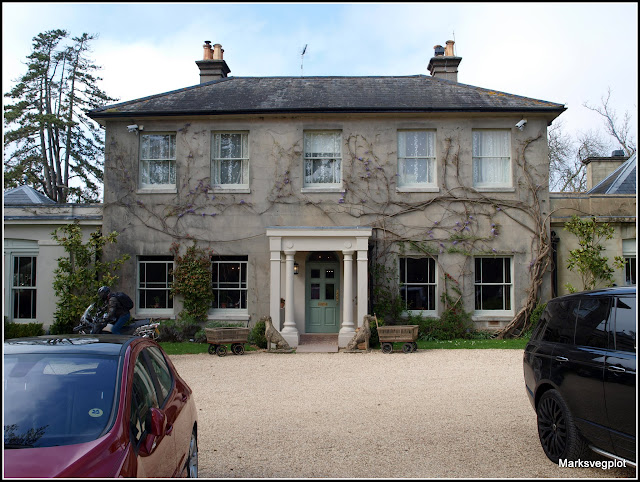 Think cosy armchairs in front of a crackling log fire. The public rooms are decorated with what I'd call Bric-a-Brac, and I think the restaurant was equipped on a similar basis - no two items of crockery, cutlery or glassware were the same. This could easily make the place seem like a junk-shop, but it doesn't, it feels quirky but it works! Likewise the bedroom we had was in a detached chalet about 50 metres from the main building, but it was lavishly equipped and decorated extremely tastefully in the so-called Shabby Chic style. Since it is April we weren't able to avail ourselves of this feature, but the room opened out onto a beautiful secluded garden fully furnished with tables and chairs. I imagine this would be an idyllic spot to sip a Sundowner cocktail on a Summer evening, or a cup of tea at 6.00 a.m. while listening to the Dawn Chorus! 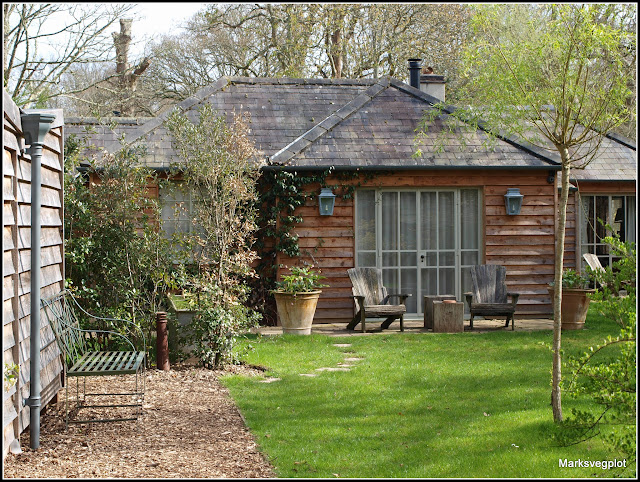 The hotel encourages guests to explore the extensive kitchen garden, from where many of the ingredients of their meals will be sourced: 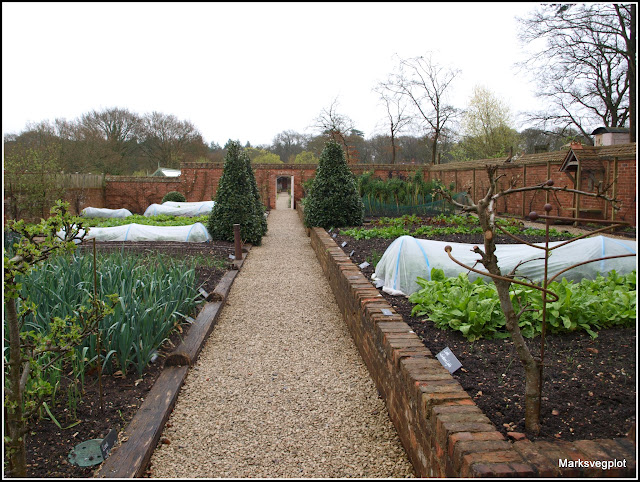 It's big. It continues beyond the opening in the wall you can see in the distance.


Just about every type of vegetable you care to mention is grown here. The only notable exception being the potato. I had a long chat with two of the garden staff who were planting lettuces, and they told me that there just isn't enough space here to grow as many potatoes as the restaurant requires. Other than that though, they seem to have something of everything. Since it is the beginning of April, most of the Winter brassicas were (unsurprisingly) looking quite tired, like this 6-foot-tall red Kale: 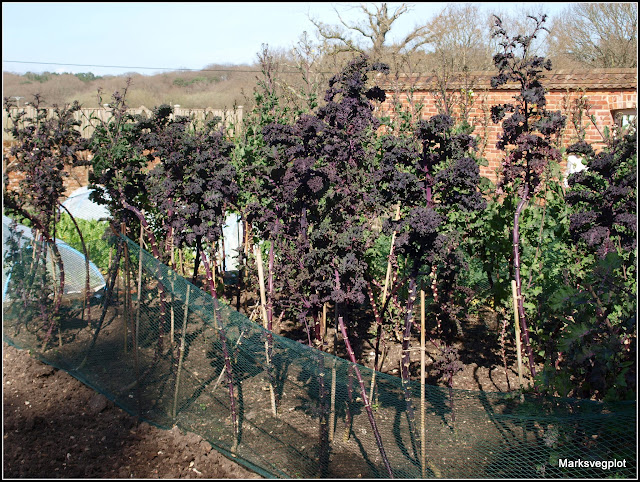 There were several beds of Spinach, Leeks and Chard: 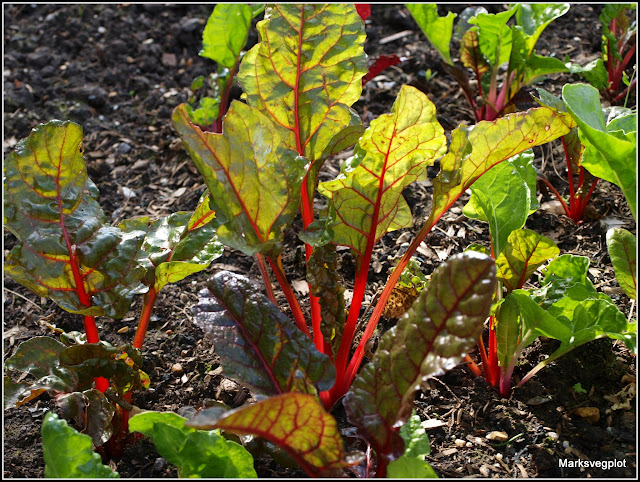 Of course I took a very close interest in their PSB, and was surprised to see that it had not been staked, but just left to flop: 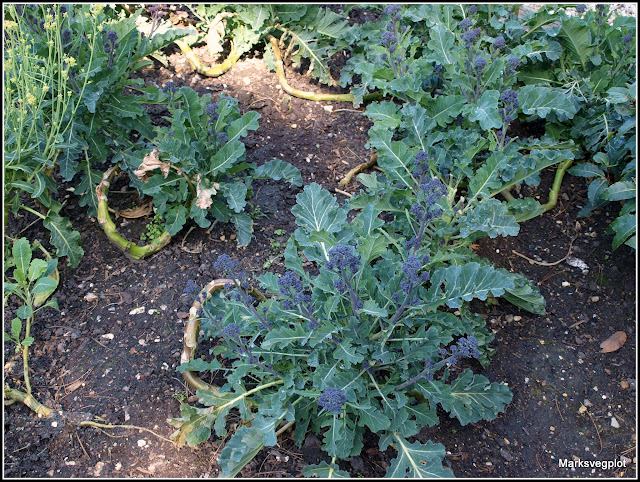 Apparently this is because in the past it has frequently been blown over (snapped in half) by strong winds. They said it did well enough without staking.


The garden has a greenhouse, which as well as being used for starting off young plants is also used (especially during the Winter) for growing Baby Leaf Salads of various sorts:

We can vouch for the fact that these make very nice salads!


All round the garden was that mellow brick wall, covered in carefully-trained fruit trees. It was perhaps significant that the height of the wall had been extended all along one side by a beautiful slatted wooden fence, presumably to lessen the effect of the wind. 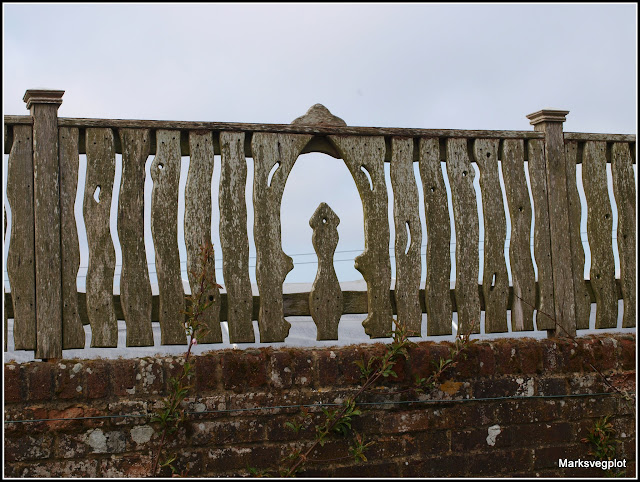 In one place we saw this little cubby-hole, designed to contain refreshments for the gardeners! 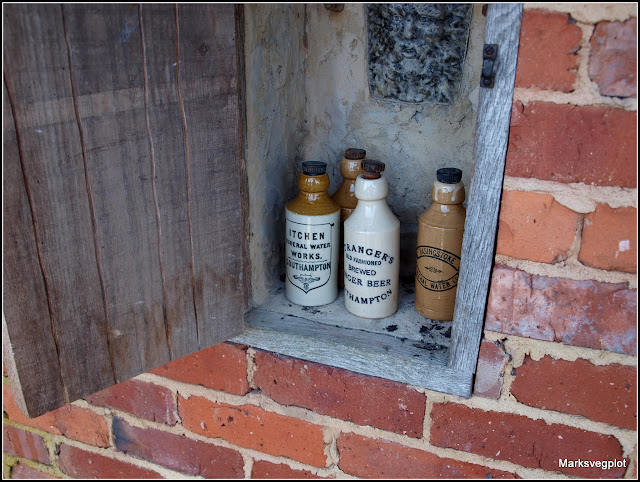 With such a wonderful range of fresh ingredients close at hand (did I mention the free-range chickens?), it is hardly surprising that we had a fabulous dinner. Star of the show for me (and epitomising the hotel's ethos and style) was my Main course, which was Loin of Pork coated in a crispy herb crumb, served with Purple Sprouting Broccoli and semi-pickled Portobello mushrooms, garnished with spicy baby Nasturtium leaves. Here's a rather grainy pic of it...


It's not something that particularly appeals to me, but I feel it's appropriate to mention that the hotel also offers a range of spa treatments, and I have it on good authority that they are very relaxing and therapeutic. Some of them take place in this charming little cabin at the far end of the kitchen garden: 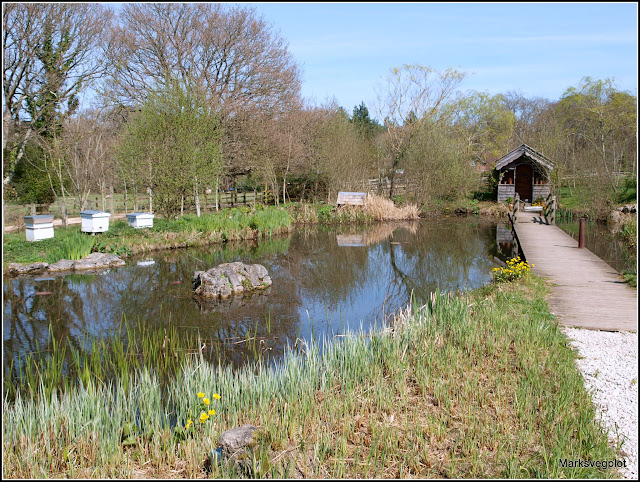 The Pig is not a cheap place to eat or stay, but in my humble opinion it is worth the money. 24 hours spent here is a thoroughly restorative and pleasurable experience - the sort of thing that I am prepared to "push the boat out" for, once in a while.


I'm going to finish my post today on a lower note. I want you to see this piece of porcine garden sculpture. I hope you will forgive me / us for dubbing it "The Crapping Pig"!   :-) 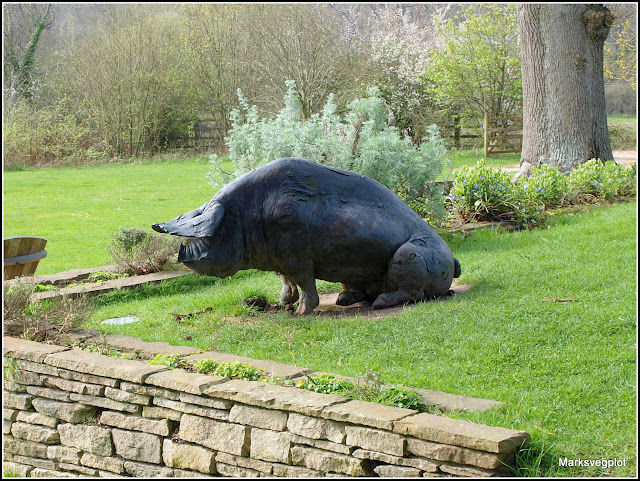