This dish is in the style we call "Cape Malay". It's probably nothing like the real thing, but it's how I imagine a pork curry dish would be if it were made in South Africa. The style I want is a sweet, fruit-based one, with a mild heat - not a fiery hot one full of chillis. We once had some ready-made curry sauces that were of this nature, so I'm trying to re-create their flavour.


The impetus for me to create this dish came from the fact that in this week's Riverford Organics box (did I tell you that Jane won a month's supply of meat and veg from them?) was a 500g pack of diced pork shoulder. I initially thought about making a Mexican-style pork-and-beans casserole with chipotle, (which is probably my all-time favourite) but I don't want to make that TOO often, otherwise we'll get bored of it. So here we go with Curried Pork with Apricots...

An important ingredient is the Malaysian-style curry powder. Here I'm using a sachet of the real thing - made in Singapore by Yeo's.  Malaysian curry powder includes a high proportion of the fragrant spices. The ingredients of Yeo's are listed as: coriander seed, chilli, fennel, cumin, turmeric, white pepper, aniseed, cinnamon and clove. Also in the picture below: the pork; apricots and raisins; garlic and root ginger. 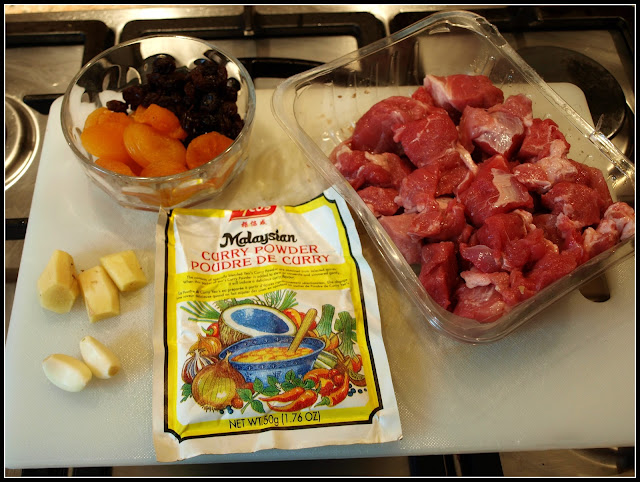 I marinated the meat for a few hours in a marinade made from about a third of that packet of curry powder moistened with a little vegetable oil. I also added the crushed garlic and finely grated ginger at this point.

This is how I made the curry dish:


I served my curry with plain steamed Basmati rice and a vegetable dish of my own invention, using these: 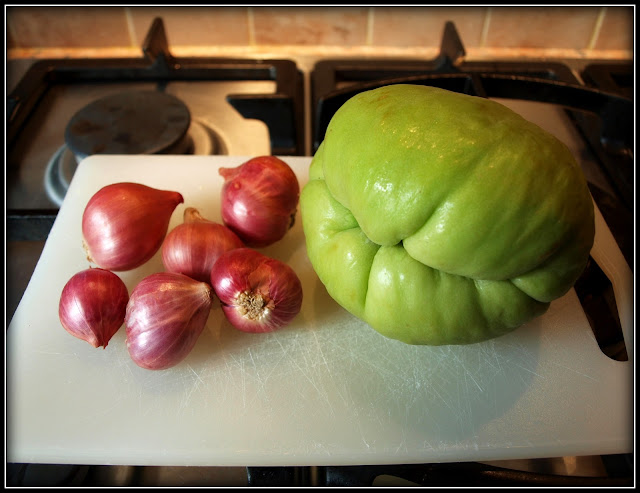 ﻿
You'll recognise the red Asian Shallots I expect, but what about the thing at the right of the photo? It's a Chayote, aka Christophene, aka Chow-Chow. It has a texture like an asian pear - crunchy but moist and juicy at the same time. Technically a fruit, it is used mainly as a vegetable, in savoury dishes. 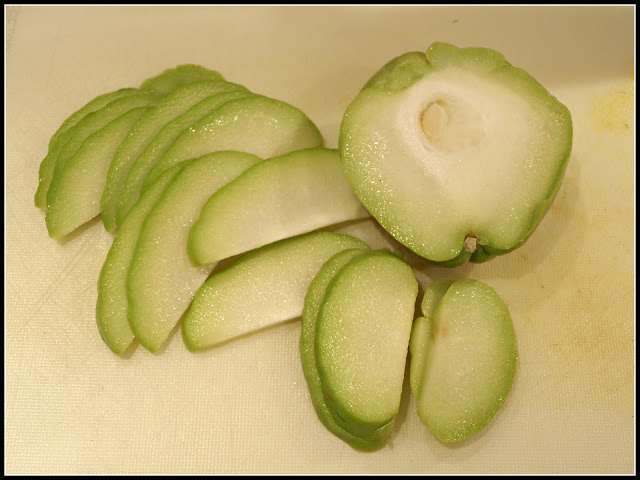 You can eat it raw, (it doesn't need to be peeled) but it's nicer lightly stir-fried, which is what I did with mine. I stir-fried the shallots in some vegetable oil in a wok and then added the sliced Chayote and some pre-cooked carrot( and a chilli!) just at the last minute, cooking the dish for only a further couple of minutes. You can get Chayotes from your local Indian or Chinese shop, by the way. Here in the UK they are seldom available in "Western" shops. 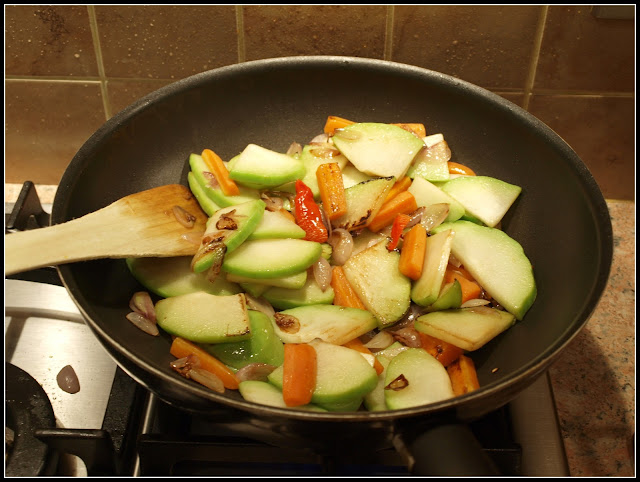 As it happens, I think the Chayote would have benefitted from pre-cooking too. It was perhaps a little too crunchy for our liking, after just a few minutes' stir-frying. If I do this one again I'll also slice the Chayote into smaller pieces - maybe batons, like the carrots - to make them easier to eat.

Here's a photo of the finished dish: curry, rice, vegetable. 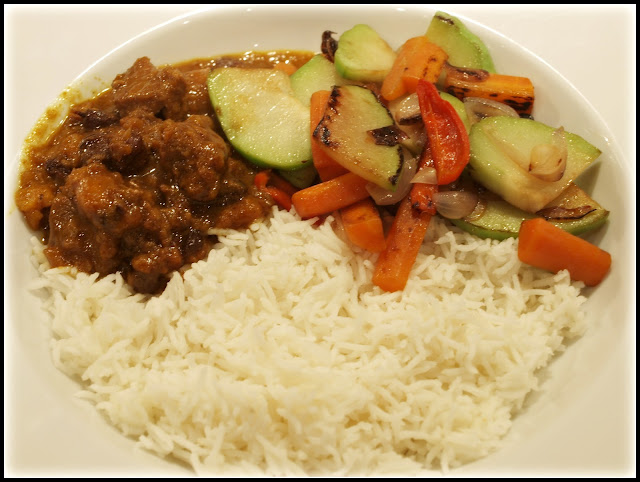 Our verdict: great curry; shame about the Chayote. The curry was everything I had hoped it would be. Tender succulent meat, infused with the sweetness of the fruit, creamy coconut-ey sauce and wonderfully fragrant curry flavours with just enough chilli to leave a pleasant tingle on your lips!

P.S. Wine recommendation. We had a nice light South African Pinot Noir (2011) - from Robertson Winery, which went perfectly with this meal.