At the weekend we looked after our granddaughter Lara, while her parents went up to London to watch the cricket (the England vs India Test Match).

Lara loves helping out in the garden, so we had a busy day. First off we harvested some more of the Pink Fir Apple potatoes. 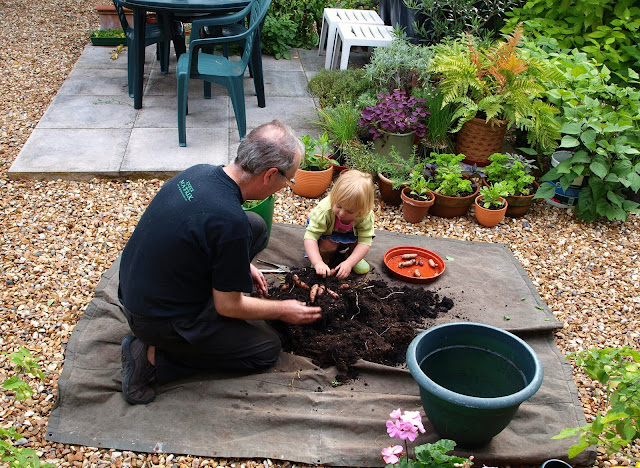 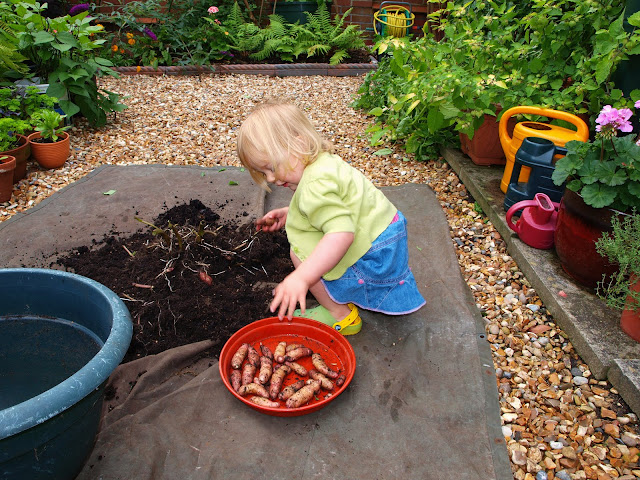 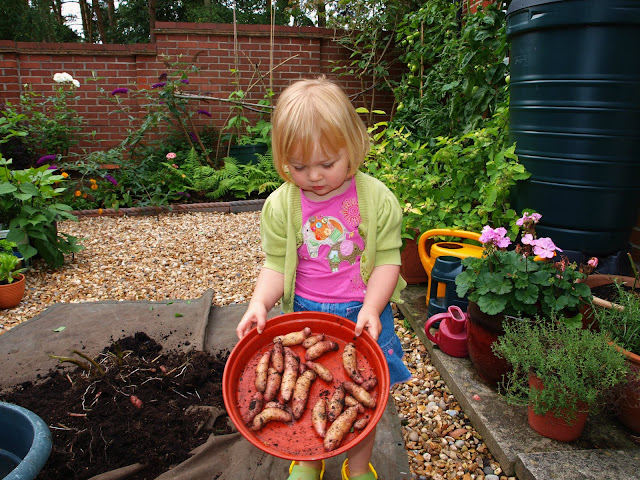 Lara certainly understands where her veg comes from! We ate some of those potatoes at Dinner time. We all agreed that they were deee-licious.
Later on we picked the last of the Blueberries. 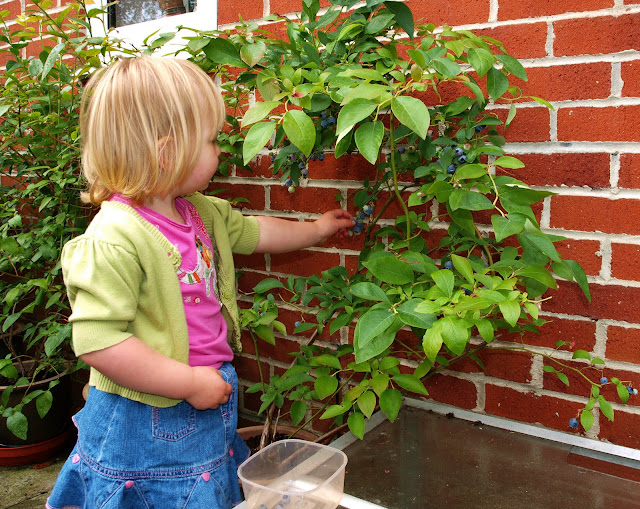 "Look at this one Grandpa!" 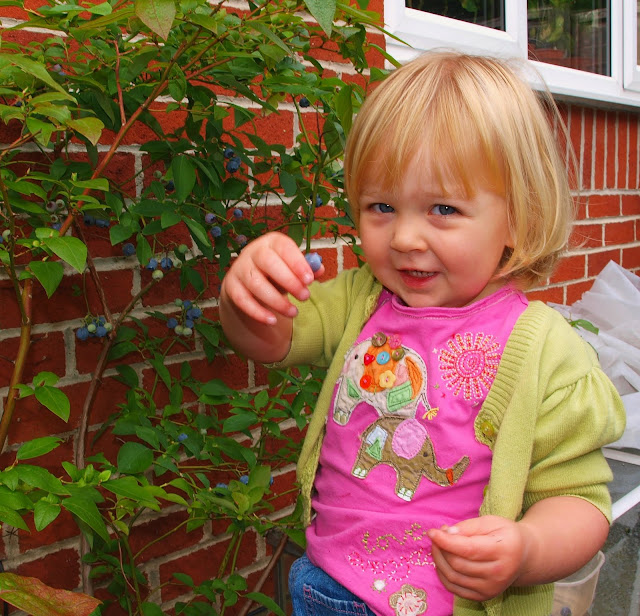 Of course, we had to try a few, just to check that they were OK... 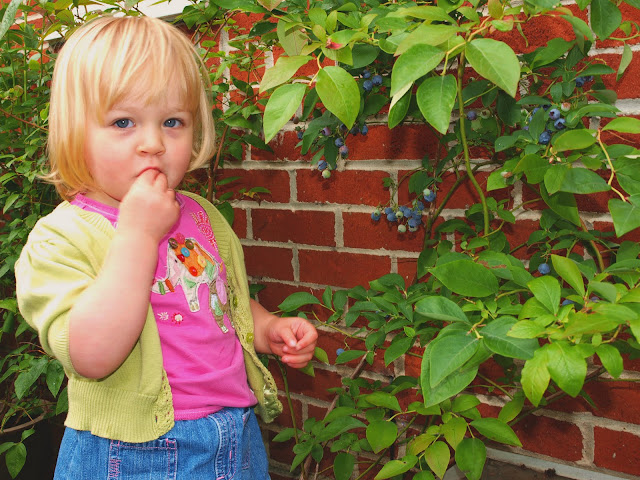 ﻿
We did end up with a viable quantity, though I think Quality Control accounted for about 25% of what was picked.
After making the rounds of the Tomato plants in much the same manner (One in the box, one for Lara...) we managed to find a fair few ripe fruits which joined the rapidly-increasing mound of them in the kitchen. 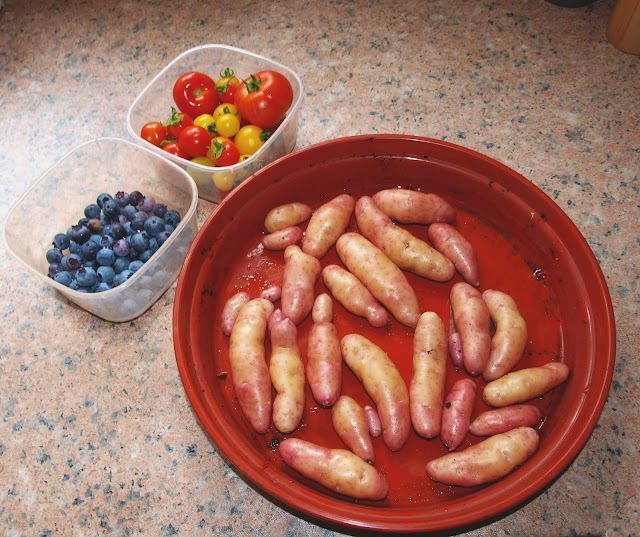 It wasn't all work and no play though. We had a walk down to the local park for Lara to play on the playground, hoping that this would tire her out (it didn't), and when we got home we had some quiet time (this is a figure of speech, you understand, not necessarily a statement of fact when a 2-year-old is involved).
Jane spent some time with Lara, doing some rubber-stamping, making some lions and crocodiles and things like that for Lara to colour-in with crayons and felt pens. Lara is very keen on this jigsaw puzzle too; she wants to play with it every time she visits us. 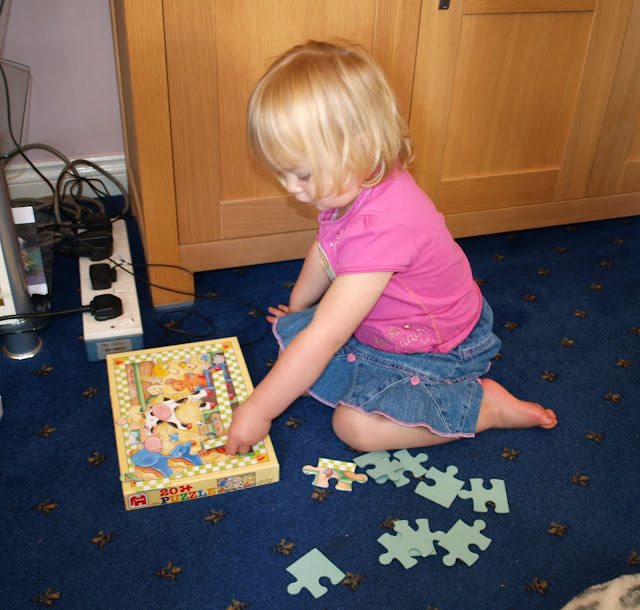 OK, quiet time over, back into the garden. Lara loves walking / running around the paths between my raised beds, hiding from us behind the various crops. This is always accompanied by shrieks of delight and much laughter. Her favourite path is the one between the tall climbing beans and the Asparagus. She seems to love the "tickly" feel of the Asparagus ferns against her face as she pushes through.
Picnic time. Grandpa gets to sit down for a few moments while Lara dishes up "tea and cakes" with her plastic tea-set: 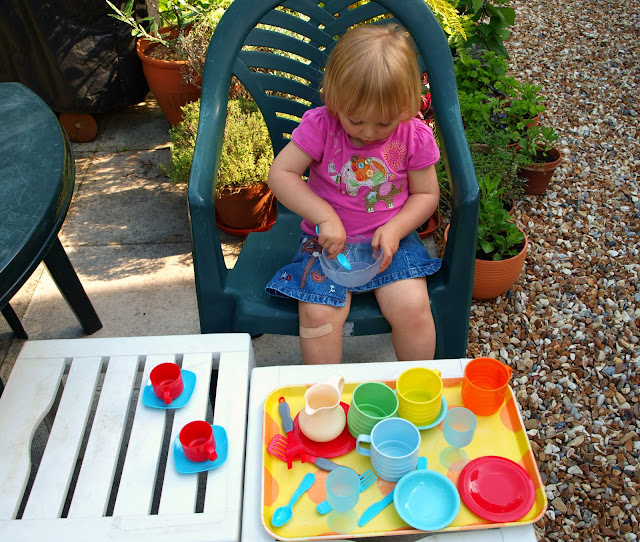 This is Lara's "Pose for the camera" face: 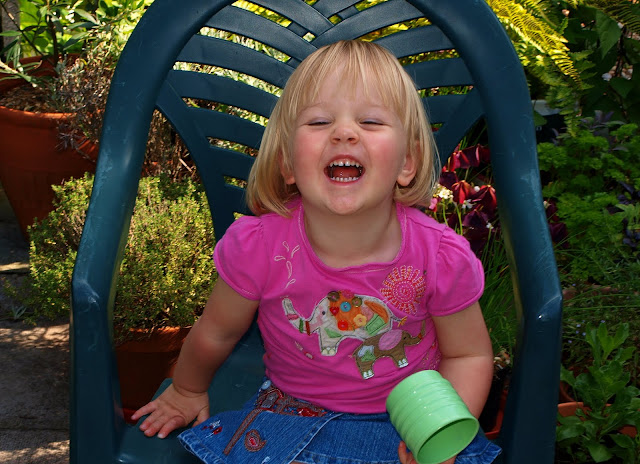 Lara finally crashed out at about 8:30, just before her parents came to pick her up. Jane and Mark crashed out at about 10:00. It's easy to forget how exhausting looking after a toddler can be. For the lucky grandparents it is fun and enjoyable -- and occasional!
Posted by Mark Willis at 17:30