Apples - "Scrumptious"? I think not!

Earlier in the year I had to dispose of my Victoria plum tree, which had become diseased and was beyond redemption. Now I reluctantly have to admit that my Apple tree "Scrumptious" has gone the same way. Actually, it is obviously not the same disease because the symptoms are different. The apple tree's leaves are pale and yellow, and the fruits are stunted, wrinkly and pitted. I have concluded that the tree has a severe dose of Bitter Pit. It contracted the disease last year, but was not too badly afflicted. This year it has got steadily worse, and I do not think it is worth trying to save it.

At this time of year I would expect the fruits of this tree to be still mostly green, with perhaps a bit of a reddish tinge, but this year the few fruits are a much darker colour than ever before. Look at the contrast between my first two photos:

In the picture above they don't look too bad, but they are actually very small and quite soft. Look at the one on the right: you can see the uneven dimply surface. Most of the fruits have not developed and are beginning to fall off. 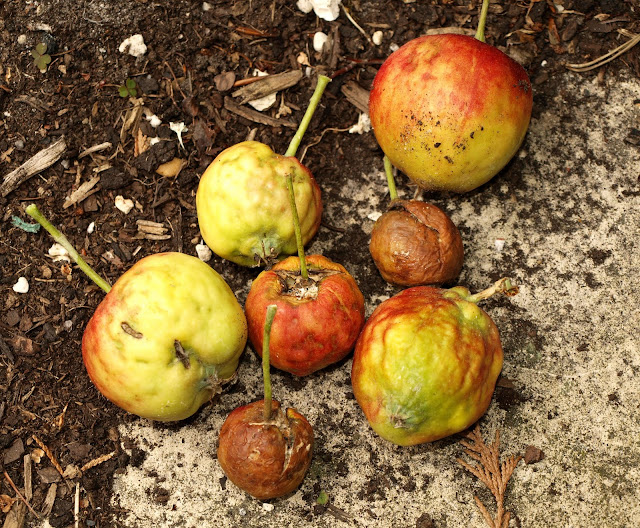 It's not a pretty sight, is it? I think the tree has to go! It's funny, but apple trees sometimes seem to thrive on neglect. All my TLC has been to no avail.

Fortunately the pear tree seems to be OK still. Long may it stay that way. 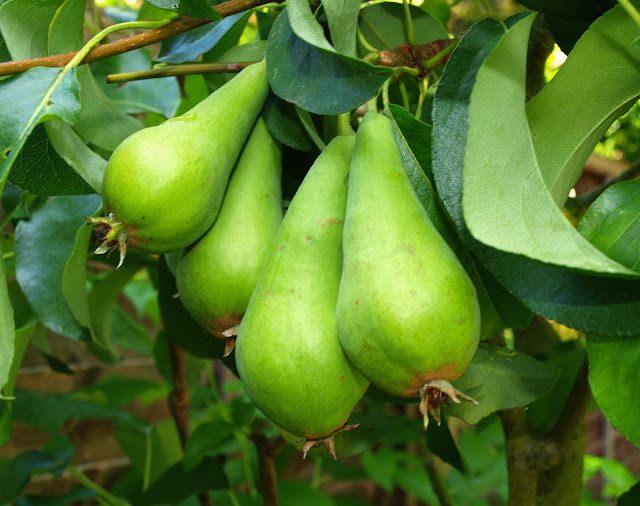 I have been thinking about whether I should replace the fruit trees with new ones, but I have concluded that it might be better to concentrate on maximising the yield of the Raspberries that are along the fence where the fruit trees are. I don't know if Bitter Pit is something that can linger in the soil, but it's probably best not to plant another apple tree in the same place for a year or two.
Posted by Mark Willis at 17:30