Despite having written the other day that I have made one or two little changes to my gardening plans because of the Covid-19 pandemic, I'm still trying to keep as closely as possible to my normal routine. There's no point in panicking, and I know that if I just keep doing what I've always done, I'll get veg at the end of it!

This week I have picked more Purple Sprouting Broccoli, which I always consider to be the last of the previous year's crops. This is "Red Arrow". 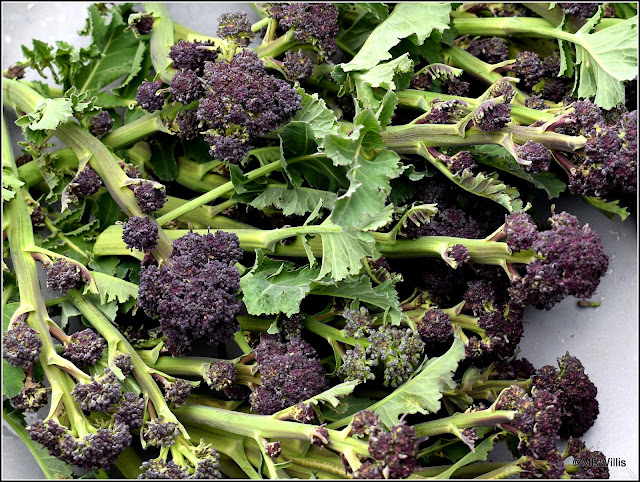 Since my wife Jane is not keen on this vegetable, I have scaled-back my production of it, and this time I only had two plants. Nevertheless it has reached the point where the spears are in danger of going "over" (long, thin and stringy) before I can eat them, so I have picked all those that are ready, and I'll keep them in the fridge in one of those green plastic "Stayfresh" bags. I find that stored like this it keeps fresh for at least a week, possibly longer. 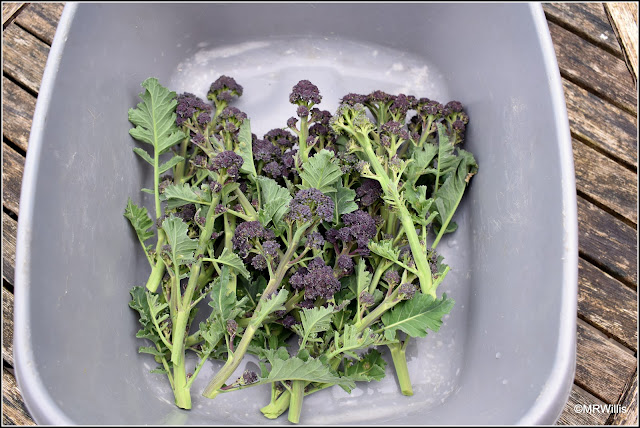 Looking forward to the 2020 crops, I have been bringing on my tomatoes and chillis in the same way as normal. After germination in the airing-cupboard they spend a few days in the Growlight House, and then get moved to the windowsills. The chillis have reached the windowsill stage now. 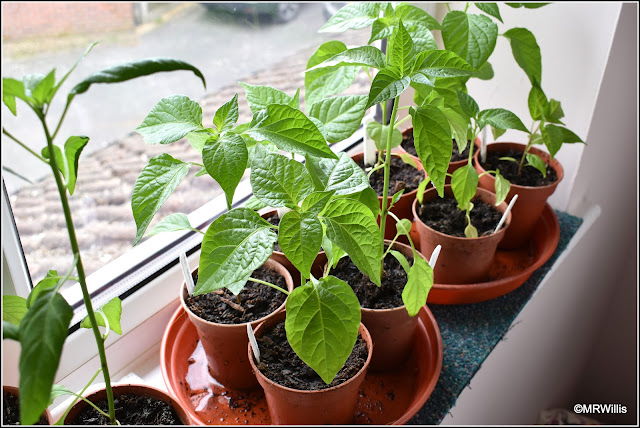 The plants are looking nice and strong this year, and so far none of them have had any aphids. I think this is because I haven't over-Wintered any chilli plants indoors this year. I'm sure that in the past the aphids and/or aphid eggs have originated in the old plants.

Some of this year's plants are already producing flowers. I know that some people advocate removing any flowers that appear before a plant is quite big, because leaving them might weaken the plant. I think since I'm not aiming to produce any exhibition-quality plants I'll just leave Nature to take its course. 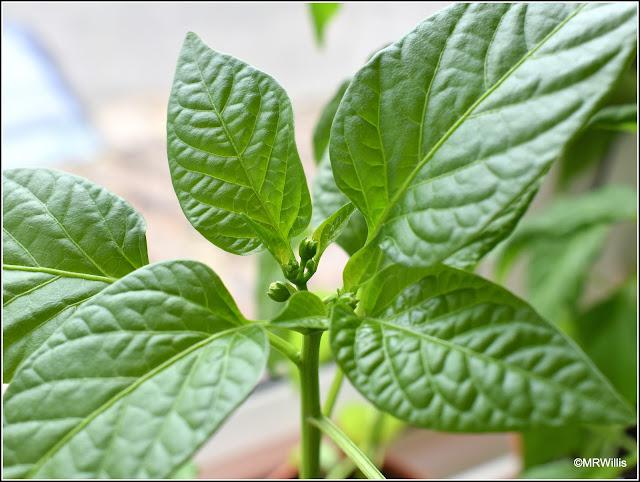 The tomatoes are a couple of weeks behind the chillis, because I don't sow them until the chillis are ready to come out from under the lights, but already I'm giving them an occasional outing to the windowsills to gradually accustom them to natural light. 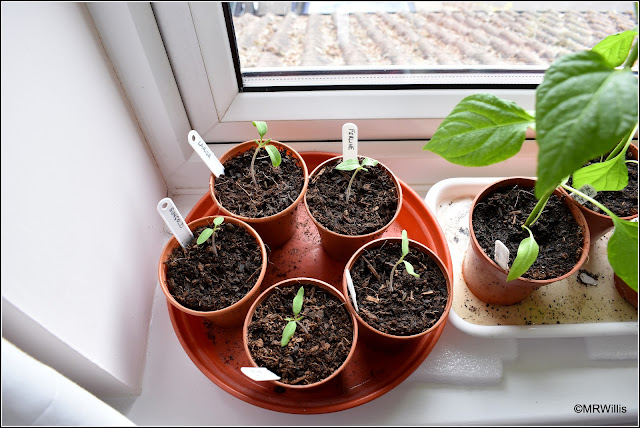 You can see that they are still pretty small, but already they are forming their first proper leaves. 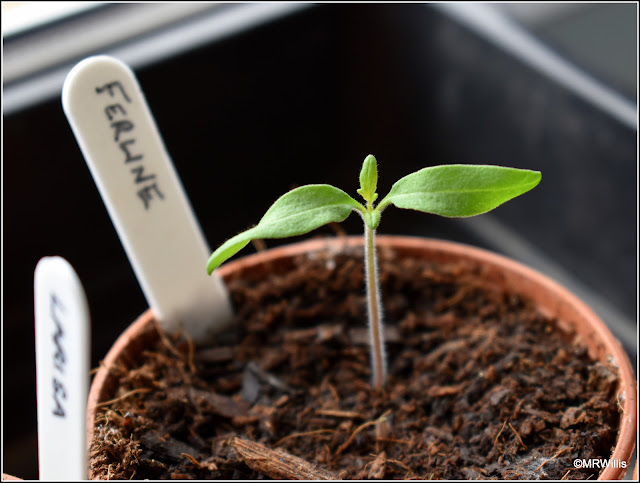 I had pretty good rates of germination with my tomatoes this time, and I have recently had to do a cull - removing duplicate seedlings from the pots. Frustratingly, the only pots not to produce any germinated seeds have been two of my "Maskotkas". This is disappointing because "Maskotka" is one of my long-time favourites and I usually grow at least four plants of it. I do still have four, because I sowed six, but I would have liked to have had a couple of spares. 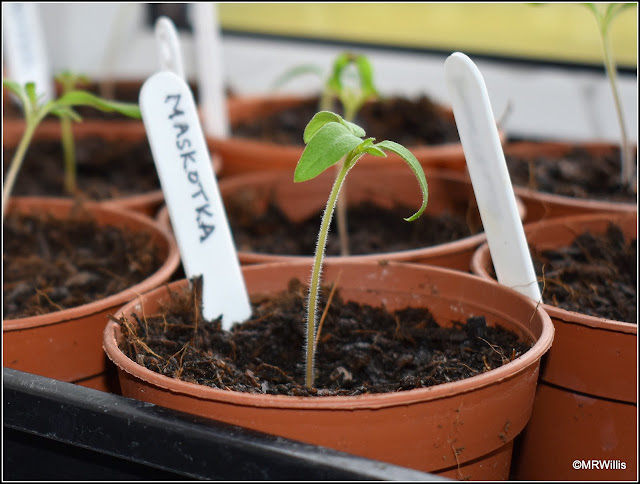 In other news, I have finished planting all my potatoes now. I have 12 pots of them, planted 2 to a 35-litre pot. Each pot is protected from the elements (particularly frost) - some more comprehensively than others! 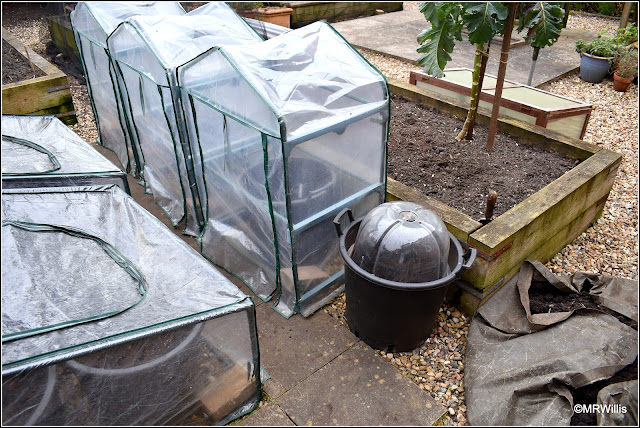 That's two of the low type "Seedling Greenhouses", each covering 4 pots; three of the upright type 2-Tier mini-greenhouses, each with one pot; and tail-end Charlie there has to make do with a bell cloche!
Posted by Mark Willis at 07:00