It's true, windy weather really upsets me. It makes me feel on edge; I can't relax, and doing any gardening seems like a chore not a pleasure. My young plants hate the wind too. I've been trying to get my chillis and tomatoes hardened-off, but for most of the early part of this week it has been too risky to keep them outdoors because the wind has been so intense.

Fortunately today (Thursday) the wind has dropped to a gentle breeze and we have had warm sunshine all day. Of course the tomatoes and chillis have been outside basking in the sunshine, but I've also caught up on a few jobs I had been meaning to do. My first task was to get some Lettuce planted out. 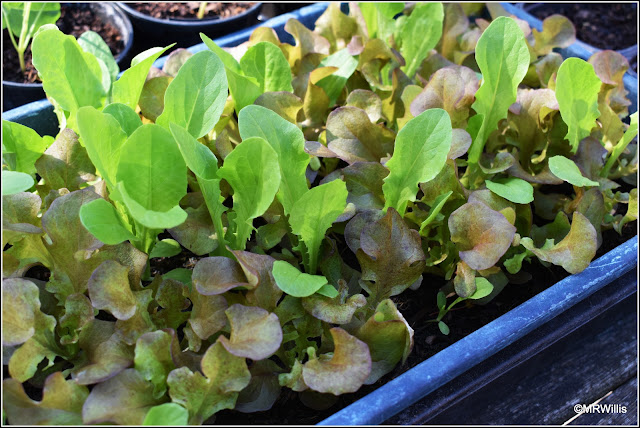 I've planted a total of 14 Lettuces, of 4 different varieties: "Lobjoit's Green Cos", "Saxo", "Marvel of Four Seasons" and "Cocarde". This should give us the opportunity for some nice varied salads in a few weeks' time.


I did the planting of Lettuce in the morning, before the sun got too hot, but my little Lettuces soon began to wilt, like this one.


I had to hurriedly make a contraption to shade then from the direct sunlight. This thing is normally a windscreen-cover for my car! 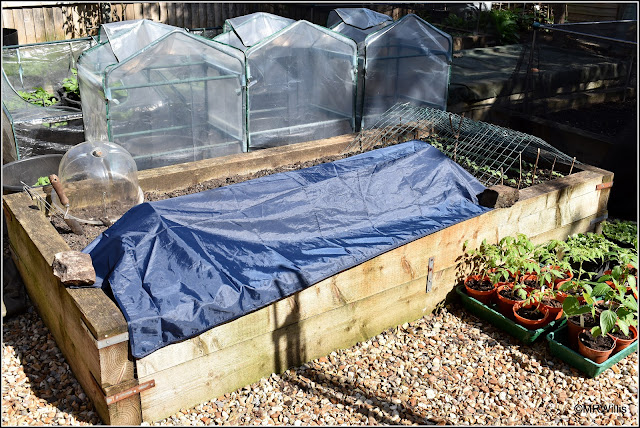 Underneath the shade-device there is some pretty comprehensive anti-fox protection. 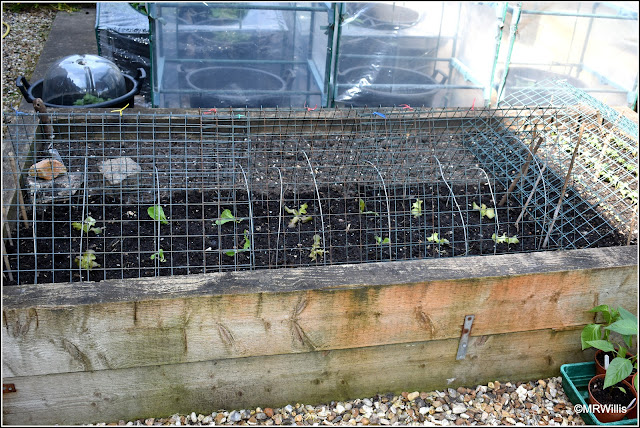 This of course is made with the ever-useful wire shelves from my mini-greenhouses: 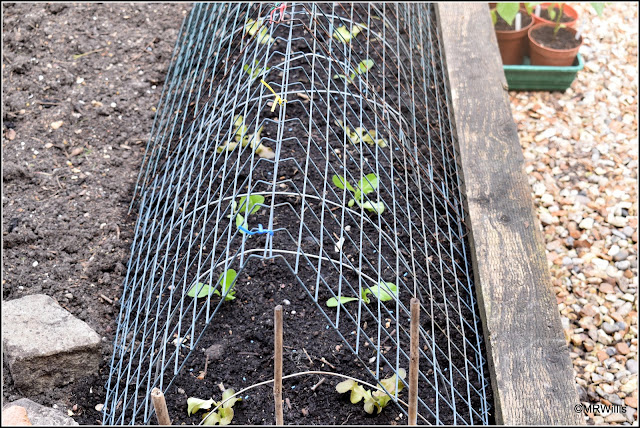 Another job I did today was pot-on my spare "Maskotka" tomato plants. These are the ones from my second sowing, after two of my first batch failed to germinate. As usual I put two seeds in each pot, and of course this time they ALL came up. They didn't all come up at the same time though, so they are very different sizes.


The prolonged sunshine has brought things on a lot in the last couple of weeks, and I want to show you one or two of the front-runners. For instance, the are the first Broad Beans I planted. They are the "Express" ones.


I've not had this variety before but they seem pretty good - quite short plants, but already covered in flowers. 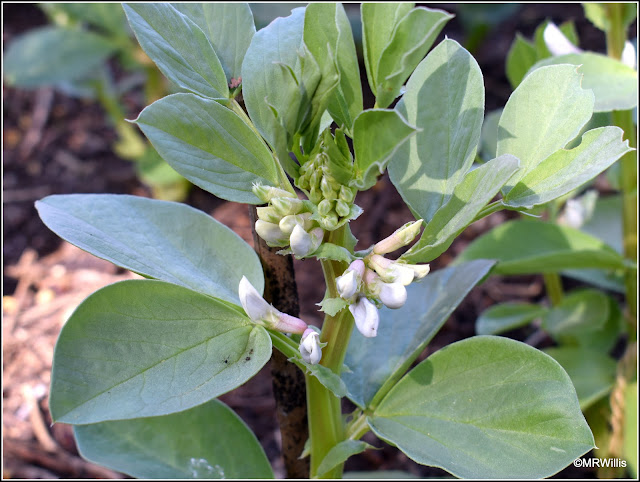 The potatoes are looking good too, coming along nicely in their mini-greenhouses. 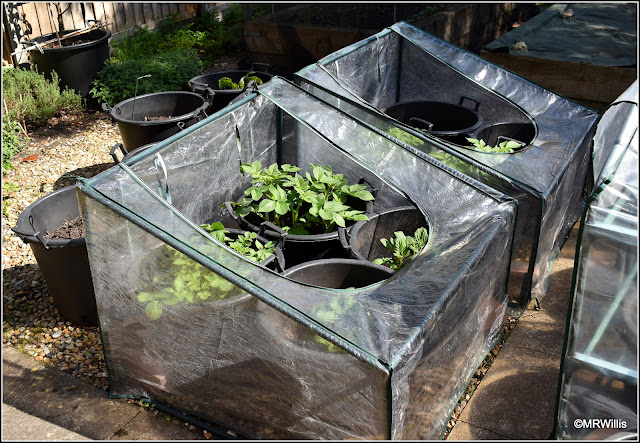 These are the First Early ones - "Colleen" is in the lead, closely followed by "Rocket". 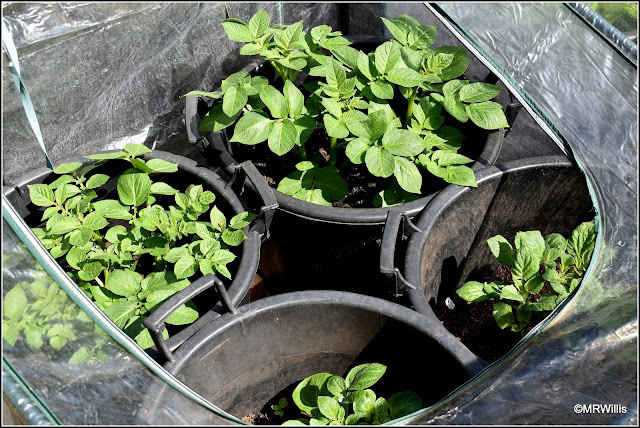 Down at the bottom of the garden the Comfrey plants are growing so rapidly that it almost seems that you can see them get bigger by the hour! It's not a huge patch, but it's always enough to give me a couple of bucketloads of rich but stinky plant-food. 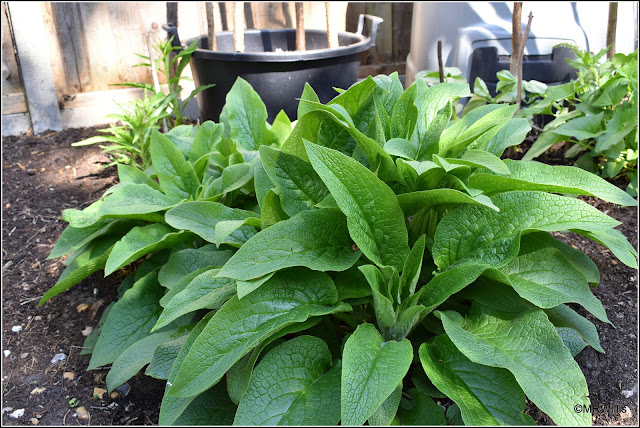 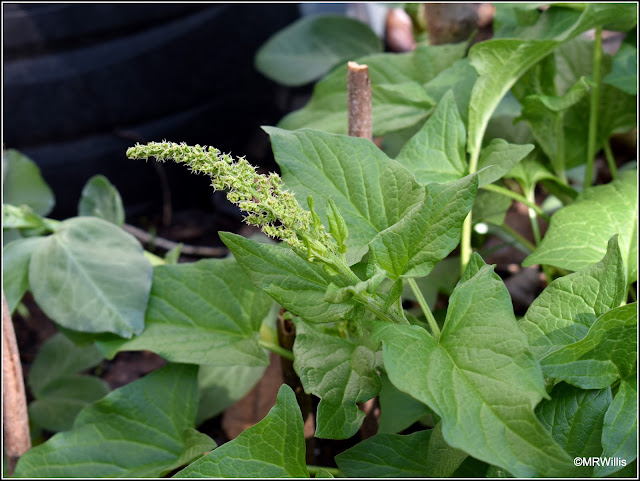 Some people eat those shoots, but I think I'll give them a miss, because I prefer Asparagus! 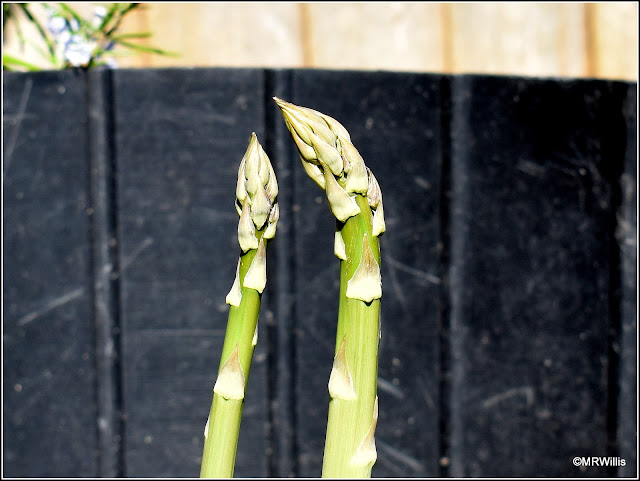 I only have a couple of crowns of Asparagus, and they produce a tiny crop (9 spears so far this year, though to be fair the season only officially begins today, St.George's Day), but it is just SO delicious. I like it best served with a poached egg, a spoonful of Hollandaise sauce and a few shavings of Parmesan cheese!