The extraordinary circumstances created by the coronavirus pandemic mean that shopping in the normal way is practically impossible, and there is no guarantee of being able to buy what you would like to buy - especially in respect of items with a short shelf-life food items, such as fresh fruit and vegetables. This has already prompted a huge surge of interest in growing one's own veg. Lots of people who have never done this before are having a go, converting their back gardens to veg-plots or taking on new allotments, just like their grandparents did in WW2. I suspect that many of them will discover the hard way that growing veg is a long-term affair, and requires lots of dedication and hard graft!


As most readers will know, I have been growing fruit and veg for many years now, and I fully understand that it would be incredibly hard to be self-sufficient with only the small amount of space I have available, and the best I can do is supplement our food supply. My garden is roughly 100 square metres (10 x 10), but nevertheless, by dint of careful planning I do manage to coax a fair bit of produce out of it! This year, in true wartime spirit I am being especially careful to utilise the space in the best way possible, and squeeze just a little bit more out of it. In this post I want to show some examples of this.

For instance, I had originally planned to grow 20 Broad Bean plants in this raised bed, in two parallel rows, the first of which I planted last week, but I have changed that plan and now have 30 plants in three rows instead. 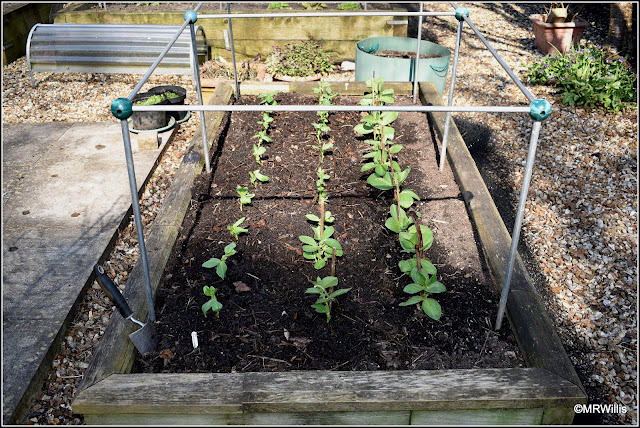 In gardening it's often true that "Less is more", and overcrowded plants competing for insufficient resources may not do well, so to compensate the beans for being a bit cramped I gave their raised bed an extra boost. I dug-in some Growmore general fertiliser and incorporated a few bucketloads of homemade compost, to help the soil retain moisture. The compost comes with a disadvantage though: it's full of creepy crawlies, and the Blackbirds love scratching around in it, so I definitely have to cover the bed with anti-bird netting.

Some of the plants in the first row of beans were half uprooted by the birds before I added the net, so after re-planting them I gave each one a small stick for support and tied the plants to the sticks with soft string. This has the advantage of helping them to stay upright despite the very strong winds we have been experiencing. 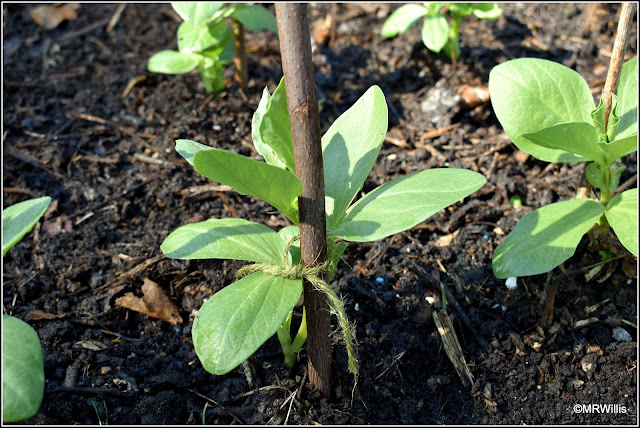 Here's another example of my 2020 approach: you might remember that I recently planted a lot of onion seedlings, but was left with a few spares, which in normal times would probably have ended up being composted... 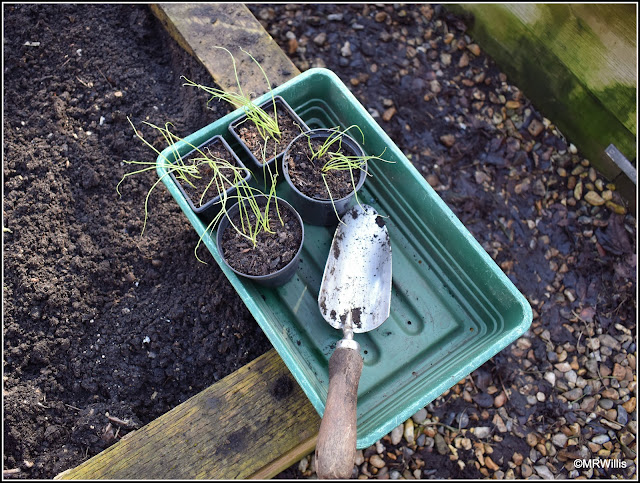 Well, I have now planted those four clumps of onions into a couple of black plastic crates filled with soil. These are containers that I have successfully used as "flower-pots" many times before. They have several drainage holes in the bases, by the way. 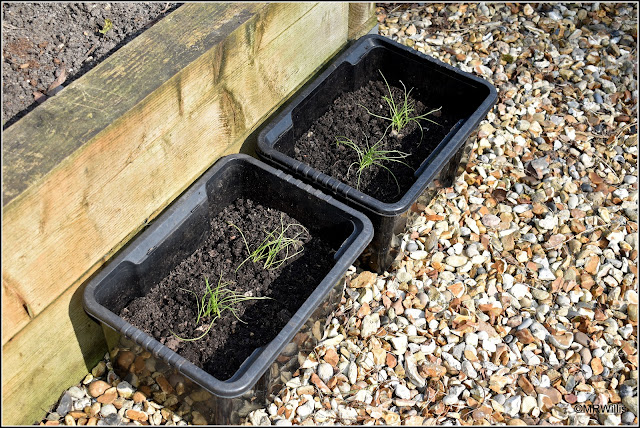 Since my main crop of onions will be growing elsewhere, my intention is that the ones in these containers should be harvested at an immature stage, to be used as "Spring Onions". It would be nice to be able to just nip out to the garden to pick one or two of those as required, instead of having to plan 10 days ahead and order a bunch from Ocado! 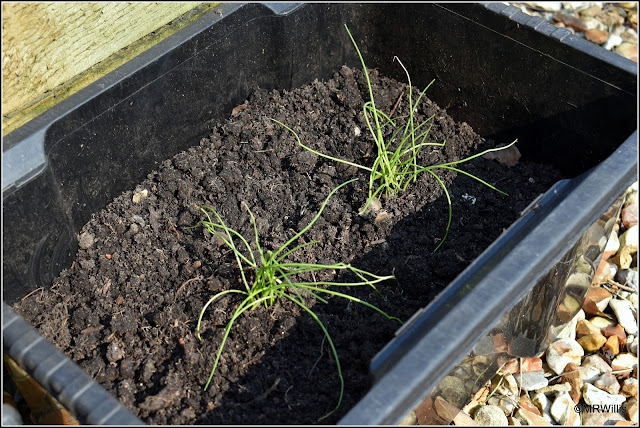 The plans I made just after Christmas had me devoting one of my five raised beds entirely to Carrots, and another one to Parsnips. However I have revised those plans and the Carrots and Parsnips will now share a bed, and the other one will be used for some of the quicker-growing brassicas - which I had not intended to grow at all. This change of plan is because I foresee that obtaining a supply of long-lasting root veg is going to be easier than getting hold of more perishable, "soft" veg, and "greens". Without wanting to appear too pessimistic, if the pandemic worsens and/or gets more severe, it's possible that even the supermarkets may find it difficult to source fresh veg.

In view of the above I have sowed seeds for Kohlrabi (a purple variety called 'Kolibri F1'), Green Broccoli (Calabrese style) and Brokali ('Apollo'). None of these can realistically be ready until early summer though, so in the meantime I shall be relying on salads, many of which should mature much sooner. I have two types of lettuce on the go ('Lobjoit's Green Cos' and 'Saxo'), plus a tray of Baby Salad Leaves, some Lamb's Lettuce and some Rocket. Oh, and let's not forget the Peashoots already growing on the Dining-Room windowsill: 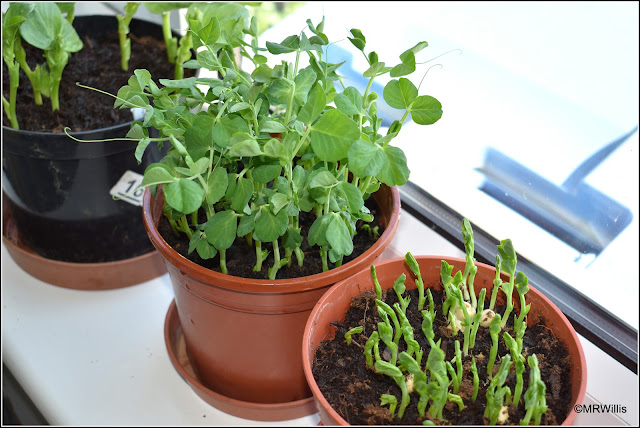 Also in the salads department I have two pots of Watercress. This is over-wintered stuff, recently potted-up. It looks a bit "weathered" at present, and in normal circumstances I would probably have binned it by now, but because this year is different I'm keeping it, so hopefully it will soon pick up. 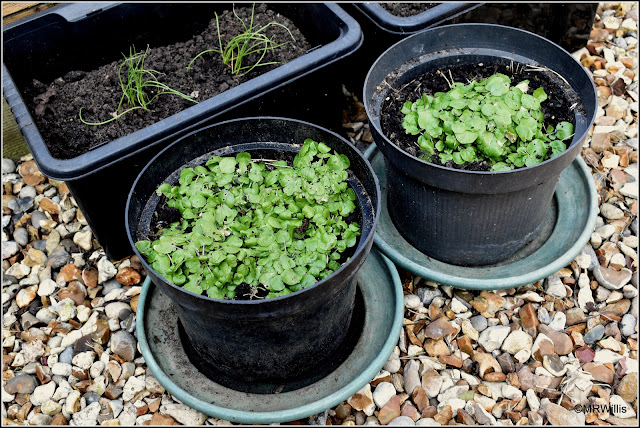 Some people think that Watercress will only grow in running water (e.g. a stream), but this is simply not true. As long as you keep the soil / compost moist, it is perfectly happy in a pot. Because of this it is a good crop for growing on a windowsill, which might be particularly attractive for anyone having to endure a 12-week stint of "shielding". It's easy enough to grow some from a sprig of shop-bought Watercress, rooted in a jam-jar of water, like this: 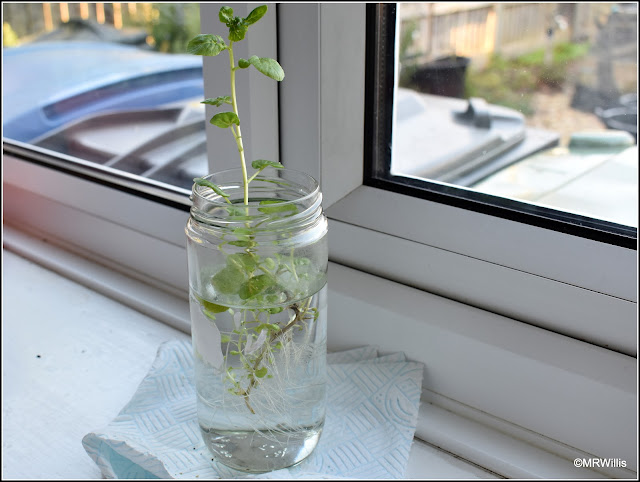 My final thought for today is this: how lucky I am that I already have a well-established veg-plot, and that it is in my back garden, so that I can do my gardening as normal, without any unnecessary risks. This is in stark contrast to the dilemma faced by allotment-holders across the country who have to choose between staying home and making repeated journeys to tend their crops and possibly livestock (hens etc). For everyone's sake, I hope that this year's weather will not produce any more extremes to add to the stress.
Posted by Mark Willis at 10:00